difference between dough arms for the Hobart N50

difference between dough arms for the Hobart N50

First time posting on the site and i have a couple questions.  I need to buy a dough hook for my Hobart N50 and i keep running into two variants of the hook.  One has a cone shaped attachment head and the other has ( in my knowledge) a standard attachment head.

now my questions are as follows.

1. does it matter which one i use when im making breads?

2. is one stronger than the other one for longevity in use

3. is one more preferable than the other

i have searched and searched for an answer on forums and blogs but, no one has ever had this question.

also in the Hobart parts catalog it also has two types of dough arms the "ED" and "E".  Are these them?

Thank you ahead of time

On-line find onesharpstore.com and ask their advice.  They helped me some time ago with a Hobart problem.  I spoke to a very helpful person on their free number.

Sometimes food supply places are lazy and just post a generic picture along with whatever dough hook they're selling. The image with the cone could be for a larger mixer.

My two cents would be to get a "ED" hook as they spread out the kneading across the entire rotation of the shaft. "E" hooks tend to slap the dough around and when running close to capacity can load a mixer up more. Having said that, when I rebuilt my aesthetically well worn A200, the gears inside were virtually pristine, minus one piece of broken keystock from operator negligence.

Buy the spiral hook is my best advice.    The J hook is poor in comparison.

I got a spiral hook for my little N50 a while back.  Sweet!  Surfed around Amazon and found one that works on the 5qt Kitchen Aid.  The one Hobart sells costs more that my monthly beer allowance.

I've been using the N50 since about 1997 and love it.  Had a KA prior but it just was a little under powered and the plastic gear failed several times.

Here are a couple of photo's of my hook.

Thanks so much for all the responses its all the info i need.

I thought I was being smart and got a Hobart N50 dough hook for my KitchenAid K5A mixer. It attaches OK, but it is too tall for the 5-quart bowl, that is, it is made for a deeper bowl than the one I have (K5ASB). It is the NON-conical design. It came from Amazon who placed the order through Culinary Depot, and the Amazon listing says "by Hobart".

So how does one get an N50 dough hook to work on a KA 5-quart bowl-lift mixer, if such is possible? I suppose I could put a shim in the bowl-lift mechanism so that the bowl doesn't lift all the way up, but I don't have a good feeling about that.

I know this is a very old thread, but for those who stumble on it (as I did), Hobart calls the devices that attach to the planetary "agitators".

Agitators for the N50 are 1/2-inch taller than those for the K5A mixers. Widths are the same on both, and the bowls are interchangeable, so if you want to make an N50 ED dough hook work on a K5-A mixer, get a hacksaw or Dremel and cut 1/2-inch off the bottom end. I think it should work fine, but any risk is your's.

It's good that Hobart is still making the N50, but it sounds like that they (or the Company Suits) have 'cost' them down somewhat.  This seems to happen now-a-days with product to maintain the 'profit margin' for the stockholders.

The only preventive maintenance I've done over the years is to remove the shift/toggle switch plate off and pack new grease in the gearbox.

I'm not sure what you mean by "cost them down". I see no functional difference between my 1962 and the ones selling today, and I believe the specifications and major parts, including housings, motor parts, and gears are identical and interchangeable.

I tore my 1962 model down to bare metal, replaced some bushings in the planetary, although it wasn't really necessary, but I wanted to renew the close tolerances in the drive shaft, replaced o-rings, and renewed the grease, and painted it. I have less than $500 into it.

KitchenAids are another matter. Hobart sold KitchenAid to Whirlpool in 1987, and while Whirlpool has added many different models, colors, and twinkly stuff to catch the eye, I would put my old K5-A made by Hobart in the 1970s up against any of them in quality. You can find tons of complaints and bad reviews on the newer mixers. I think Whirlpool figures the huge majority of their buyers will only throw a cake mix in it once a month or so, and a mixer that used lightly and not very often should last forever.

I love my N50 too! It's like having a Rolex watch on my wrist, while my neighbor brags about his Timex.

The Monster... or maybe Godzilla!

If you have an old Hobart, you still have the best name in the business! Especially if it was made by Hobart in the first place! If needed, it can be overhauled to look new. And a fresh new paint job.

Do not buy a Whirlpool-made mixer if you can help it! They have been poisoned with tainted inferior parts that have people complaining & giving 1-star reviews left & right!!

My 'Hobie' was made in 1996.  I ordered it from Hobart and waited a painful long time for it to arrive.  I'm sure happy the I did because after a 'honeymoon' period / dance with it we bonded.  It's been a wonderful journey with no problems.  Man, I wish that I kept a log of flour grams I processed in the little machine.

I completely agree with your second paragraph as I have seen 'cost down' on products since the late 1980.  Along with the rights to use the good name, but not keep the quality.   I think it is all done to keep the 'share holders' happy and CEO's profits up.  It is just the World we now live in.........

By the way,,,,,  All I can say is that the majority of our population is presently at 'C' average and will allow to be spoon fed and shepherded to products based on the product's past reputation.  Sad..... 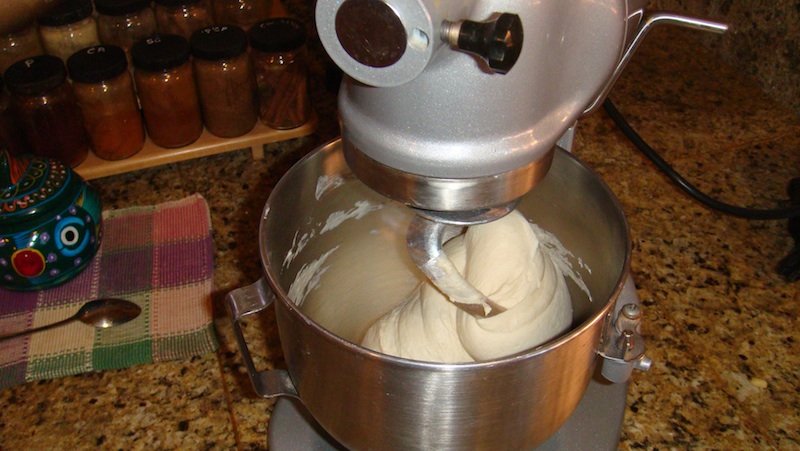 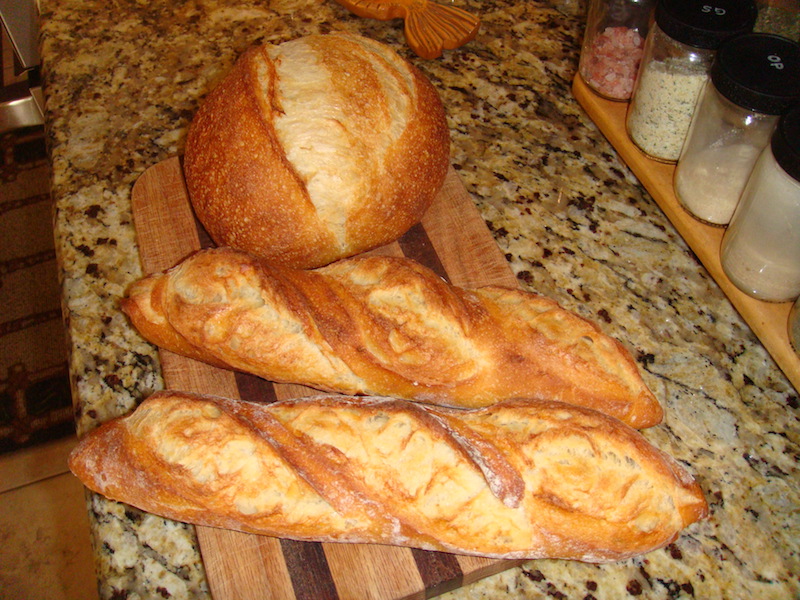 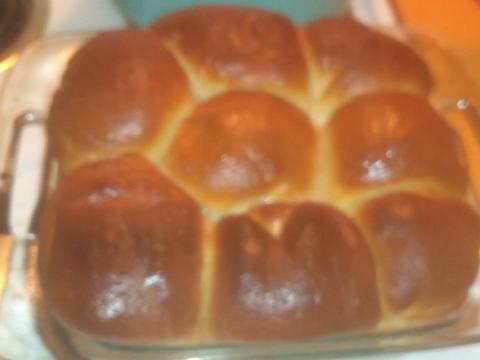 Here are some dinner rolls that I made with the Nutrimill Artiste mixer Looks good, only the pic is a little fuzzy.

You are so right, Camarie!

Hobarts are built to take the hard use of a commercial kitchen, and when Hobart owned KitchenAid those mixers were built to last too.

I did buy a Whirlpool made KitchenAid mixer recently (used for $35), but when I'm finished with it the motor will be gone and it will be a hand-crank machine with no Whirlpool shortcuts. I did one for a friend and he loves it. People use them for cooking competitions and for when the power goes out.

A little known fact about Corporations is that the CEO and Board of Directors are legally bound to maximize profits first. Everything else comes second: product quality, customer satisfaction, community relations. Everything is factored for profitability and acceptable loss. If they can save a dollar on production it's okay as long as the total spent on warranty repairs and replacements is less than the total number of dollars saved on production. Even payouts for projected fatalities (such as for automobiles) is factored into the cost of doing business.

Some companies still put quality and durability first, but it isn't cheap. That's why a new 5-quart Hobart N50 costs $2,500 on Amazon, while a new 5-Quart KitchenAid costs $300.

$300 is still a lot of money for a person just starting out in life, or for someone who seldom needs much mixing. Often a hand mixer will do for starters. KitchenAids are for those who are more advanced, or more serious about what they are making in their kitchen, but even so, they're not for serious bakers who test the limits of their machine. Unfortunately Whirlpool markets their mixers to anyone and everyone, even "professionals".

I'm well aware that KitchenAid mixers are often found in restaurant kitchens, but I seriously doubt they are used to knead bread dough, or mix really heavy batters.

The true fact is, that not everyone can afford a new N-50 mixer. Even though many might like to get one, a newly-priced one costing thousands may be way out of the budgets of many, (myself included) It would take 2 months to pay for one, which means that I would have to skip paying rent & other bills for those 2 months, it would be a disaster!!

True, if I got one. I probably wouldn't have to worry about it breaking down, but unless they come out with a cheaper model, it probably the only way that I get one. That is why I got a KA Model G to fix it up & paint it gray to make it look like new again.

I'm with you Camarie. I would have to sell my first-born child to afford a new N50! There is no way I could justify spending that kind of money. The Model G is an N50 branded KitchenAid, and every bit as good as any N50. Plus: it has a certain vintage panache.

I saw  new listing for an N50 on ebay and I jumped on it. I paid $350 including shipping, and I got the bowl, beater, whip, and dough hook. It was a stunning deal. Fortunately for those of us who can refurbish them we get the equivalent of a new one for a bargain price. I took mine down to bare metal and replaced o-rings, a couple of bushings, the grease, a new cord, and painted it. All told I spent another $130, and have a total of $480 into it, plus my labor.

You and I are lucky we can fix them up.

That is why so many people are constantly buying them up on Ebay.!! Hard to even get a used one, because people are buying them up left & right! And the ones that are used even cost over $1.000! And forget about bidding for one. If it ends up costing over $1,000 And if you win the bid, Ebay will expect you to pay for it.

They are doing this to avoid having to buy a new one. They don't want to have to fork up a fortune to buy one new.

Can't blame them though.