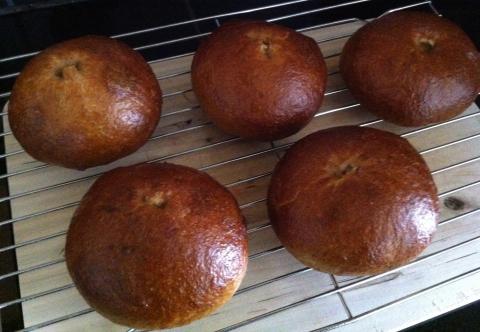 I used Reinhart's recipe from BBA with some deviations ...

- 4 day fermentation in the refrigerator

Yesterday morning I cut the dough into 6.75 oz pieces and formed them into 5 small boules. Last night I pinched the middle, poked my finger through, and formed them into torus-shaped bagels. They went back into the fridge and this morning I setup the water+lye solution and heated the oven to 450dF. I boiled each bagel for about 70 seconds, and then baked until deep brown (I'm not certain of the time but would estimate it was about 20 minutes of baking).

Parchment is a necessity as I tried baking 2 directly on my stone and they stuck. I was able to "save" them without much damage.

As you can see by the pic I need to do a better job on shaping.

I just ate about 1/2 of one and it is tasty. It has the proper consistency, nice doughy and tight crumb with a firm, flexible, and crunchy crust. Nice.

I'll definitely be making these in the future. I think I'll incorporate some other flours as this batch was 100% KA bread flour. I'll also put some toppings on ...

But if you want to keep the hole after boiling/baking, use the "rope method" :)

The hole in a bagel is useless to me, yours will make a great sandwich.  :)