One Woman’s Trash… Making Bread In a Stone Baker

One Woman’s Trash… Making Bread In a Stone Baker 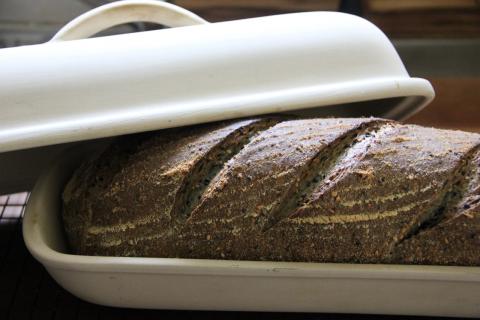 If you’ve been following my blog, you should know very well by now that I am a big fan of home made bread.  I’ve been baking my own wild sourdough bread for a few years now (thanks to my friend Rimma, who showed me the light), wrote about it plenty, and took some pretty decent pictures.  I own about 97 per cent of the currently published good books on artisan bread making (ok, let’s not exaggerate here, it’s more like 93 per cent at the most), and my kitchen, though it has been minimized and downsized in the last two years significantly due to the interstate move, has nonetheless seen a steady increase in various bread making equipment — from proofing baskets, to flax couche (never to be moistened, god forbid!), to parchment, to loaf pans, to grain mill, to cast iron combo… you get the picture.  But, you know, for a true junkie no amount of junk is ever enough.  So today’s post is about my latest acquisition.

I happened to participate in a staging of our church’s community “garage” sale.  I must admit that I had never before taken part in anything of that sort, so I was quite overwhelmed with both the amount of stuff to be sold and the effort that went into setting this whole thing up.  I am not going to get into too much detail about the event itself; suffice it to say that it took us four full days (volunteer helpers were coming and going in shifts) to get everything ready.  It was a lot of work.

One of the perks was the opportunity to see the goods before they became available to public, sort of by invitation only pre-sale.  I had to exercise incredible restraint to keep from buying stuff: we are constantly on a look out for things to get rid of in my house, for the space saving sake, so bringing more stuff would not be wise.  And I held off quite well for the whole three days!  But then the day four came and, as it turned out, someone hauled in a whole truckload of household goods the night before.  We ran out of space in the main hall, so the new arrivals were piled in the spillover room, largely unsorted.  And I just had to go looking… You see, I am a selective pack rat.  I don’t buy things just to have them in vast quantities, and for the most part I only keep what I need.  But when it comes to cooking (both books and wares), I am as good as any hoarder.

I found a bunch of stuff which in my past humongous-kitchen-with-many-many-half-empty-cabinets life would be considered as good as sold on the spot.  But in my two years of living small, I have learned to be wise.  I have learned, for example, that single purpose items, such as that pretty dip and chips tray which cannot double as anything else, have no place in my kitchen. And no, I don’t really need that amazingly shaped cookie cutter, and that asparagus pot with a steaming basket1. I was crying on the inside, considering and rejecting one item after another, when I saw this thing of beauty.  I didn’t know yet what exactly I was looking at, but my gut sense was strong, and it told me that it had something to do with bread making. Oh yeah! This was it — the covered loaf pan.  The stoneware pan.

You see, I have mastered the covered bread baking in my cast iron combo cooker. It works beautifully on round loaves.  But I have a 14″ proofing basket for Italian style long loaves, and I could never get a nice loaf done without a cover, because other steaming methods just don’t work as well.  Not until now — this stoneware thing held a great promise, and it was the exact size of my proofing basket — a match made in heaven.  And now, my friends, it’s officially time for drooling — this loaf pan was marked at ONE buck.  And I bought it.  And the next day I had to leave to see my family in NYC, so I didn’t get to try it out for another week…

I baked the 4S bread which I made and posted about a while back.  The anticipation was tremendous.  I had to look up several things about the stoneware baker. I found that it was, indeed, a very good one.  It had a fancy name, and with fancy name of course came a pretty fancy price.  I totally lucked out! It had no cracks, no fractures, and was reasonably clean inside and out.  Yes, time for that second drool.  The bread came out absolutely superbly shaped.  The bloom was beautiful, almost magical.  The crust was hard at first, and chewy and crackly later.  We got a very tall, very well rounded Italian style loaf of Semolina+Sesame Seed+Spelt+Sourdough bread. Perfection!

Best buck ever spent, guys!  Oh, and in case you were wondering how I suddenly justified a single purpose item purchase, it can double as regular clay pot.

1 – in case you were concerned about the fate of that asparagus pot, I bought it. I can never cook asparagus well in my small pot, and we planted 25 bushes of three varieties of asparagus this year, so I plan on eating lots of it, it’s my favorite vegetable. So much for not buying single purpose items.

Lovely bread, and well done on your very lucky find. I have one and had to pay a fortune for mine! I like them better than the Dutch ovens to be honest. That looks like a really tasty loaf, you must be thrilled with your new purchase.