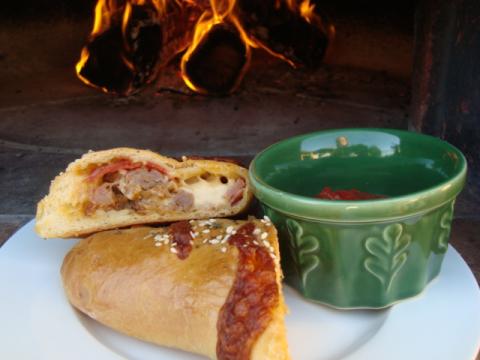 It seems everyone is enjoying cheesy bread's lately and with Ian's last post on Calzone and watching 'Diner's Drive Inns and Dives' hosting an old favorite diner of mine and it's Calzone's.  It has certainly put me in the mood for one.

Mike had taken Saturday off from work to do a mountain bike race and neighbors were all home.  So I was make K.Forkish's levain pizza's for everyone. 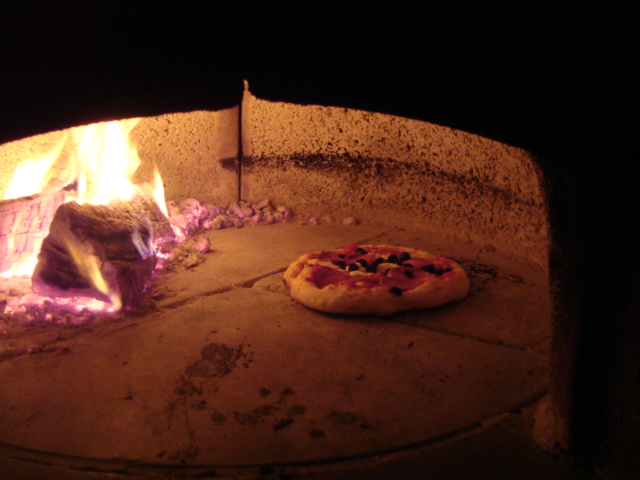 Before making the pizza's.

My wood fired oven needed a pre-warm up.  I built a small fire and removed most of the coals and ash.  Thinking I might have enough heat stored in the oven for a little baking.  I decided to make up a quick one day dough for calzone's.  I found just the recipe from Beth Hensperger...mini calzone's.  So I made my version based on the one's I saw on DDID tv show and used BH dough recipe.  I liked it because it also had Semolina or Durum flour in it.

The calzone's were delicious and I was surprised at how light they were dispite the filling.  The crust was crisp and very tasty with the fillings.  Mike loved the one we cut open and ate while I prepared the pizza's.

The rest were frozen as suggested by BH. I liked that idea.  Just place them on a sheet pan freeze and then seal them in a freezer plastic bag, freeze and warm up later for a snack.

I placed them into my WFO and baked them for a few minutes.  I could see the oven was not quite hot enough so I had to remove them and finish baking them in my electric oven.  They turned out great and just needed a few more minutes in a good hot oven.

These are simple and delicious.  This was great time for simple and easy.  I had plenty to do later. 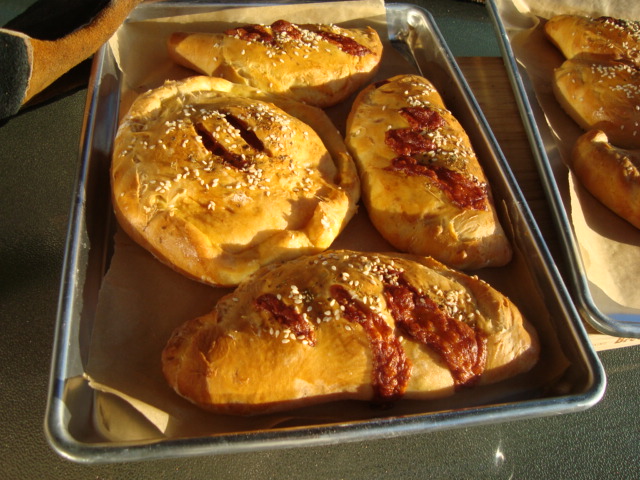 You can easily mix this dough up in your bread machine's dough cycle or by regular mixer.

Here's my version of the recipe.  You won't be disappointed and neither will your kid's, husband or game watcher's when it's snack time.

Egg wash - one egg yolk with about a TBsp of milk

sprinkle of sesame seeds and Italian oregano on top of calzone's.

After your dough has proofed.  On a lightly flour a surface.  Divide into dough balls for how ever many calzone's you wish to make.  A couple of very large one's or mini's, it's up to you.  Roll into thin rounds, fill, shape and place them onto your parchment lined pan.  Then egg wash, slash, sprinkle with sesame seeds 'opt' and bake.  I didn't proof them any farther than the time it took to put them together.  They went right into the oven and baked.

I have frozen thawed them in the frig, nuked them, frozen and unfrozen and also heated them in my mini oven.  The froze and heated up beautifully.

Roll out your prepared dough into about 8 or 12 mini calzone circle's.

layer half of the circle, leaving about one inch.  Egg wash edge and fold over and seal.

Bake till golden, about 25 - 30 minutes on parchment lined pans. 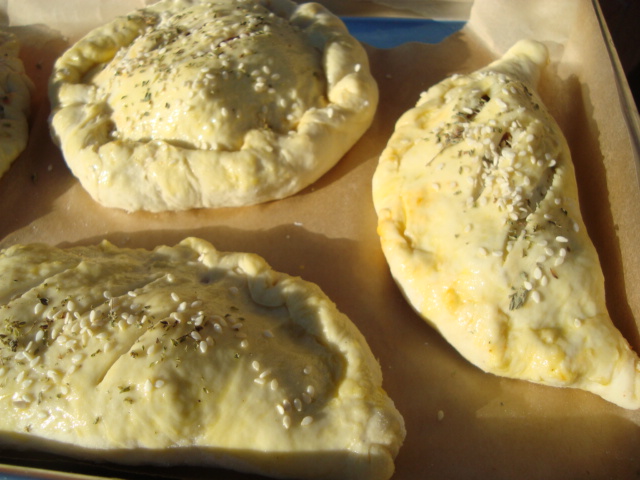 oops, looks like I'm running out of battery.  I'll have to do any further posting 'proof read' later.

Wow!  Those look fantastic Sylvia and must have tasted great.  I love Durum flour as well and will have to try this formula for a quick calzone dough next time.

Lucky neighbors you have :).

You've certainly put everyone in the mood for Calzone and gave me just the push to throw some in on yesterday's bake.

We loved the dough it was so nice crispy and light.  With all the spicy fillings and cheese it made a good balance of flavor's.

Now Lucy knows what she was missing in her Stromzones.  Ham, provolone and more.... cheese, smoked meats and an egg wash with cheese on top!  Your pizzas are always top notch but these calzones are easily itheir rival.  Just beautiful and tasty WFO baking all the way around as usual Sylvia.  Well done and

I love provolone and it did taste wonderful in the calzone.  They definately need a good egg yolk wash for a nice taste tempting color.  I think the red drizzle coming out of the slit's is from the sun-dried tomato.

I think the cheese on top might burn with the baking time..so I would just let it flow out the slit's.

Calzone's take a longer lower heat than pizza's to bake up nice.

Very nice, Sylvia.  Would you mind if I featured these on the homepage for a bit?

real great calzone baking and that oven :). Envy the wood fired oven, that must make the result taste even better and more delicious then it looks like...

The calzone's are quite tasty baked in a wfo or electric oven, these got a little of both : ) and today were heated in the toaster oven.  I think they tasted even better today.

I also like your choice of fillings, durham flour and I am going to HAVE to try this one! and the to bake list keeps growing . . .

The filling complimented the bread very nicely.  I think I would enjoy the next go with a larger calzone for 2 when cut in half, with plenty of filling tucked inside and extra cheese.

A lovely tasty and texture of bread for calzone's no matter what you tuck inside.  Use up those leftovers : )

Thanks for stopping by and I appreciate your comment.

WFO calzones, Yum! I've had calzones before at one pizza outlet.. it was soggy and unappetizing. with sylvia's hands, good tomato, provolone cheese, it just had to be good.

Not soggy at all 'lol' even after frozen and reheated they tasted wonderful and fresh.