I hope everyone has had a good summer, baking and otherwise.  Judging from TFL blogposts, it's been a great one for many.  My only indoor project has been the following formula and process.  I recommend it to anyone with a mill, a fine tamis and willingness to go to a little extra trouble for a nice flavor.

First, the name.  Acer is the genus name for maples.  No, there are no milled maple samaras in the flour.  Early on I found the products of this Quest's formula & process variations to be as similar to one another as cultivars within a species and decided to name them after Japanese Maple cultivars and species I know and like (e.g., Acer Crimson Queen, Acer shirasawanum, etc.).  The final formula and process posted here is now just "Acer Levain".

The overall goal was to extract maximum flavor from just flour/water/salt/levain containing 40% freshly milled whole grains, 3/4 of which is fixed at hard red spring wheat (cultivar unknown).  The remaining 1/4 of the milled grains (10% of total flour) is the sandbox: lots of variations (maple cultivars) explored here including einkorn, emmer, spelt, kamut, farro and rye.  I keep coming back to 4:1 einkorn:rye as satisfyingly complex, vaguely exotic but not too assertively "ancient grain".  I like the fluffy yellow flour einkorn yields (although I don't mill the different grains separately).  That sandbox has infinite potential for flavor exploration with minimal cost to crumb structure.  Another constraint of the Quest was that all steps in the process be carried out in successive mornings and evenings (no "baking days") - it had to be a Workingman's Bread.

About the milling.  This is a fitting use for the KitchenAid KGM (unhacked) given its notoriously limited capacity and coarse output.  Milling 100% of the flour for a reasonably sized bake with a KGM takes too long (for me), esp. with all the passes (see following).  But 40% is do-able and, per Ken Forkish, a pleasing percentage of whole grain for a daily table bread such as this.  Grain is first cracked at the KGM's 50% setting.  Output falls directly onto a 55# tamis (sieve) resting in a bowl, both of which are then shaken together, saving the pass-through and returning only the retained branny fraction for the next pass through the mill.  The second through fifth millings, each time of only the previous pass's 55# retained fraction, are performed on the KGM's finest setting.  These five passes-with-fractionation consistently yield what I operationally call 55% "extraction":  55% pass-through flour and 45% retained "bran fraction", all of the latter going into a 2% salted, 100% hydration soaker.  The lovely pass-through fraction goes into the levain and final dough.

The process also employs Ian Lowe's "Enzymatic Preferment" ("ePreferment") for the formula's 60% bulk-bin white flour portion (a 60:40 mix of Heartland Organic AP and bread flour to achieve 11.5% protein).  I liked this in my Spring Levain*, from which Acer Levain is evolutionarily derived.  Omitting the eP and simply adding all the white flour at the final dough stage substantially tempers the product's magic.  Caveat: The eP develops considerable gluten sitting all day, rendering it grudgingly miscible with the soaker and levain.  Effective hand mixing of the three preferments benefits from earnest pincing and squeezing, followed by a judicious rest and a brief bout of French folding.

FORMULA (click on table for PDF or here for Google sheet) 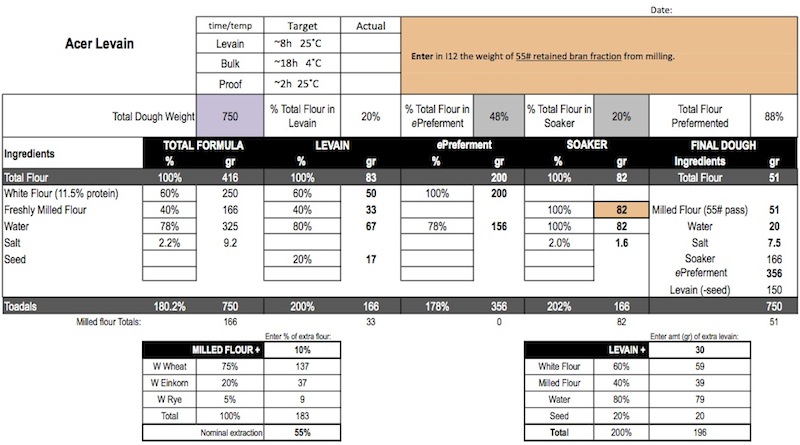 The two mini tables, below and linked to the main formula table, are for milling and levain.  There are always losses in milling so I mill more than I need, entering the percentage excess at the top of the mini table.  Total amount of retained brany fraction is entered in the main table after milling.  The separate levain mini table is necessary because I no longer keep a separate stock of levain.  The final build of a formula is just another refreshment of my stock so I build more than the formula calls for, to have some left over for future bakes.  fwiw, I stopped keeping my levain in the fridge back in June.  All room (or storm cellar) temp now.

As expected, prefermenting ~90% of the flour followed by a 18-20 hour bulk incurs a gluten cost, sacrificing crumb air (Thanks go to Phil for the idea of a long 4˚C bulk.  Great for hot summer kitchens).  A baker wielding skills to which I aspire could achieve a more fashionable balance of flavor and distribution of crumb alveoli diameter.  Still, the crumb of these breads is anything but dense, being consistently and indulgently soft and spongy-cakey, collapsing under the bread knife before the crust yields.  It is dangerously snackable unaccompanied, especially given the flavor.  And hey, bigger holes would make our current seasonal favorite Brandywine tomato/Genovese pesto/mozzarella sandwiches messy :-).  Crumb airiness has varied among the bakes, probably owing to my catching the final proof better in some than others.  Still learning.

About the flavor.  Experimentation has suggested that this bread's special flavor comes from both the fresh milling and fermentations.  The day-long soaker and eP likely generate abundant and diverse substrates upon which the levain bugs indulge in an orgy of chemical transformation for 18 hours in the fridge.  English is so adjective-challenged when it comes to the nuances of flavor that it's easier to describe what this bread's flavor isn't than what it is.   It is never sour in the acetic sourdough sense.  It is markedly less "wheaty" than naturally leavened breads tend to become as the whole grain percentage rises.  The flavor has a moderately rich Maillard character that intensifies and peaks at 24-48 hours out of the oven.  Eight percent einkorn produces a subtle note of ancient grain and 2% rye is more detectable to the bugs in my starter than to my palate.  Indeed, it's there for them, not me.  When boldly baked, the crust is as intense and more-ish as any junk food.

Most of these Acer bakes have been one or two 750 gr loaves.  1750 gr Acer Miches are special for crumb texture, mostly because the crumb of larger loaves seems to retain more moisture, resulting in a more indulgent mouthfeel and better keeping quality.  Big miches have spiritual quality for me.  But that's for another thread.

Happy baking - and milling - everyone.

*Apologies here to Phil for unconsciously plagiarizing the name "Spring Levain".  I knew it sounded nice and poetic at the time.  Sure enough, I've subsequently realized that was because Phil had named one of his (down under) spring bakes the same.

on a similar flavor quests with a few differences.  I've been milling to 75% extraction and feeding the 25% to the levain so the hard bits are wet the longest to soften them. The  multigrain mix is also whole farro, spelt, rye and ww and sometimes a little whole oat.  Besides retarding the dough in bulk we had also retarded from 16-20 hours in proofing baskets too  Another difference is we autolyse fro 2 hours to overnight all the remaining flour and water with some liquid coming out of the salt to squish it into the dough through the fingers when the salt goes in.

I am also retarding the 3 stage levain build either after the 2 and 3rd stage for 24 hours each or after the 3rd stage only for 48 hours.   We have been using whole grans between 60-100% and hydration between 80-100% as home milled flours are very thirsty.   We just completed a test on using yogurt whey for some of the liquid.

Just refrigerated the levain for Thursday's mix and Friday's bake of 30% while grain and only 78% hydration this time but that may change depending on how the dough feels.  Most of the bread have ground sesame and flax seeds, Toadies and red adn white malts since home milled flour doesn't come with any of these   I also have been putting in a little VWG int eh higher % whole grain breads.

These flours and methods have produced a fine tasting line of breads.  The holes aren't greatbig ones  but they never are with high % whole grains,

Good luck with your continued tests.  I can  can tell you are going down a similar path with similar results.

Similar paths indeed, dab.  Feeding the retained fxn to the levain fits with your incredibly fastidious attention to levain building and process.  I mostly just feed mine its same old ration when it smells like it needs refreshment and make sure it's hale and hearty for a bake.  Yours gets so spoiled (in the good sense!) by comparison.

Whenever I think I'm getting too finicky with process I look at the paces you put a dough through before it hits the oven and am reassured that I have a long way to go before I've gone too far.  Your creativity -- and bread flavors no doubt -- are an inspiration.  Thanks for setting that high bar.  And good luck on your quest!

You've combined what's best from all the world of bread baking, and the result (despite the high % of preferm. flour) is a testimony to your well engineered formula.

I love it when bread is fit for a snack all by itself. Well done, Tom!

Thanks Khalid.  Way too easy to overdo eating bread like this.  And makes too many other otherwise desirable breads taste dull.  Would to be hard to go back to previous formulae/processes and I hope I don't have to anytime soon!

It's been fun to see how much flavor is lurking in simple ingredients, creatively managed.  Interesting to think that unlocked flavors could just as well have been awful, or at least worse than those provided by more normal preferment percentages and off-the-shelf flours.  Fortunately and a bit curiously, it's all good.

Thanks for your kind words, K.

Gorgeous breads, Tom, and a lovely story and write-up.  I admire the height and oven spring and especially the rustic, cracked crusts.  Must have tasted great, too, with freshly milled grains.  -Julie

It was as fun to write up as they were rewarding breads to bake.  I can't wait to taste the bread that de-thrones Acer Levain as our weekly table bread, because it's going to have to be awfully good!