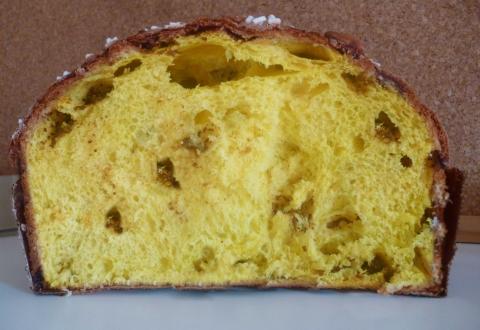 Anyone browsing through TFL will sooner, rather than later, come across mention of the Tartine Bread Book. I'll confess, I don't have a copy of this, but it does seem to be one of the go-to books at the moment for sourdough, no-knead, and lots of other techniques. Likewise, if you want to make enriched breads, there's really only one port-of-call, and that's Cresci by Massari and Zoia. I have a love/hate relationship with this book: it's expensive, the photography is not particularly beautiful (my opinion only but everything is so dark!) and the instructions are absolutely FULL of mistakes and omissions. But when the recipes work... well, everything seems worthwhile.

I've been interested in the panettone a tre impasti for some time now. For those who've never made a panettone, there are usually two separate mixing stages (excluding feeding the starter). The first one late at night and the second in the morning, followed by shaping and a 6-7 hour proof. The panettone a tre impasti is, as the name suggests, produced through three separate mixes. Cresci claims that a panettone made with more impasti will be lighter, softer, moister, and last longer. Better in every way therefore.

But I had my doubts. First, the dough looked far too lean compared to other panettone recipes in the book. If we look at the panettone a gusto moderno and the tre impasti it is easy to see what I mean:

The other thing which put me off is that the instructions (I have the Italian edition) are definitely very wrong. It seems as if the first page has been printed twice and page 2 is missing, leading straight into a mysterious page 3.

But I thought I'll have a go! And I'm thrilled I did. This panettone is excellent! The volume increase is truly unbelievable. I thought it would never stop growing in the oven. And the flavour is wonderfully rich and complex - it really is a celebration of the magic of a good starter and slow proofing! 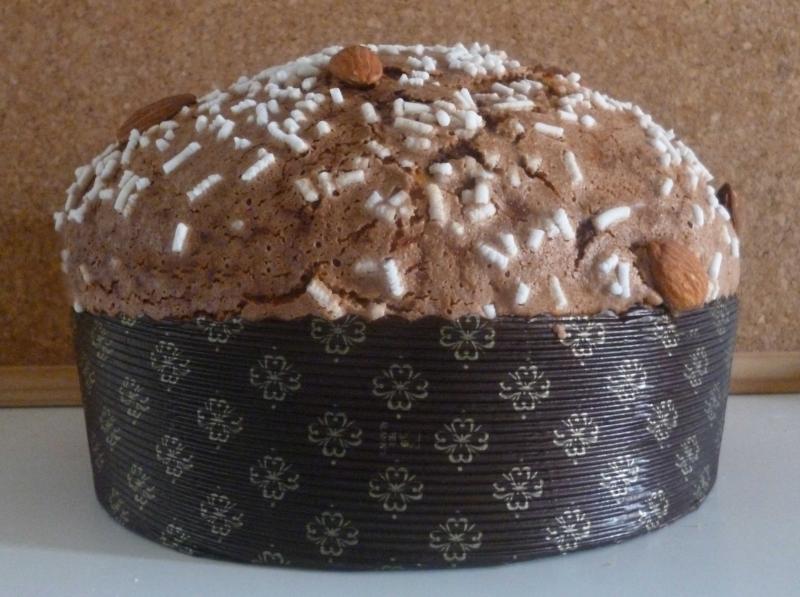 I started mine at midnight and left it to proof for 7 hours at 28C. It had just over doubled in this time. I did the second impasto at 7 in the morning, put it back in to proof for another 5 hours, and then did the final impasto. I left it to rest for about 30 minutes and then shaped it (folding it repeatedly works best before making the final shape). Final proof was at 28C for 6 hours, then 45 minutes in the oven at 175C.

To give you an idea of how much this thing grows, the pirottino here is 20cm by 6cm, and I put in only 750g of dough. It must have increased its volume by at least 6 times. Instead of using candied fruit I used gianduia. Yum! I also added the seeds from half a vanilla pod and the zest of half an orange. Because I had decided to substitute chocolate for the candied fruit and raisins, I included 5% acacia honey, to act as a humectant, and a sweeter, but mostly because I like the taste.

I made a little too much impasto to take into account loses during mixing and then took 583g of it before adding the chocolate.

This might be the best panettone I've ever tasted, and the beauty of it is, is that it is a lot cheaper to make (though very inconvenient in its timings) than the gusto moderno. 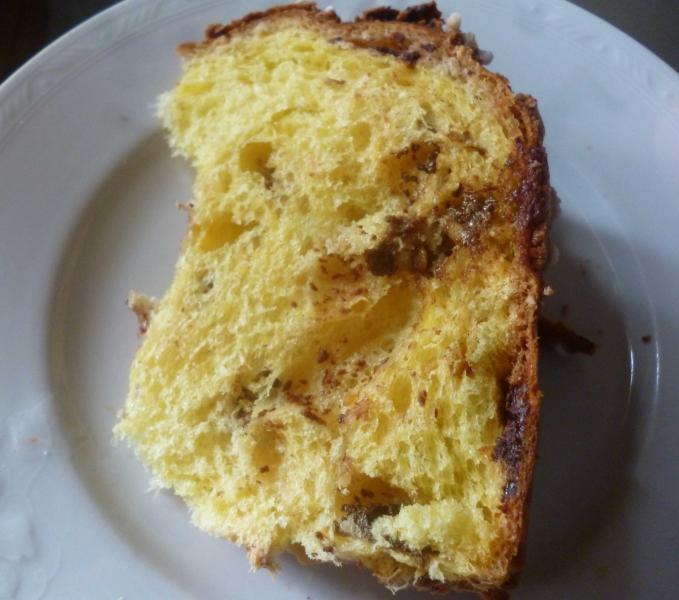 I might have to make another one very soon, but not here in Perugia. My time here is at an end... a pity, because it's a wonderful city, and I recommend it if you ever get the chance to visit. And it's great as a base to explore Umbria, which might be one of the most perfect places I've ever seen. 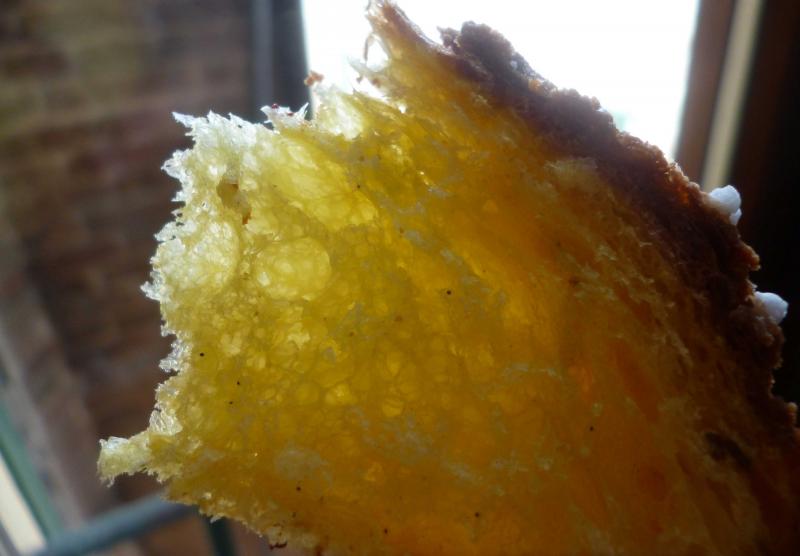 Thank you! But the credit goes with the recipe... it's very easy!

Beautiful. The texture of the bread looks so tender - i want some! It must smell amazing. I'm going to try your recipe. Do your eat it plain or with butter?

I eat it plain, I really don't think it needs any other accompaniment. It's so shreddy anyway I think you'd have the devil of a time trying to get butter on it without it falling to pieces.

Beautiful crumb. Is Cresci still in print in Italy? Can't seem to find it available through any U.S.-based vendors.

Last time I checked, these folks had the book -

Cresci is available in Italy through http://www.bibliothecaculinaria.it/ and in the UK through http://bakerybits.co.uk/ though whether it is actually still "in print" or if these are just old, unsold copies, I'm not sure.

Beautiful - thanks for sharing!

There's only one slice left now... very sad :(( I wish I had a bigger oven so I could make more in one go!

Gorgeous panettone, congrats on a job very well done!  Love the chocolate/hazelnut/orange/vanilla flavors you chose, and find the comparison to the "modern" version very interesting.  Did the modern version have any commercial yeast?

Thanks!! The modern version doesn't have any commerical yeast in it. There are varieties in the book where a small amount is used (most notably the panettone paradiso), but it's difficult to see why some have the extra yeast and some don't: the modern is by far the richest, yet has no added yeast (where you might expect it), while other, leaner, doughs have a small (very small) addition of fresh yeast. I've made some of these panettoni without adding the extra yeast and not had any problems. I wonder if the effect is only noticable when, like in the book, you are mixing 10kg of flour, rather than 200g?

hi David, you really are a panattone lover!! lovely....

The truth is the enriched doughs are the only things I know how to make! I doubt I could make a loaf of bread anywhere near the standard of most of the people on here.

Thanks in advance.  david.

unfortunately my copy of Cresci and I are in different countries at the moment as I can't check the Italian edition for you. However I can say that my percentages as I've listed them on the recipe are correct, so I'd base your recipe on them rather than the book. For such an expensive addition to a baking library, it's sadly filled with errors. The Italian version is not particularly accurate either - obvous mistakes like 100g water for 2000g of flour can be found throughout the book.

Good luck with it!

I decided to try this recipe for Christmas breakfast.  The result was delicious but not very satisfactory.  I got no oven spring although the dough had risen respectably at each stage of the process.  Indeed, by the time it had cooled the top of the loaf had become somewhat concave.  And the crumb was not anywhere near as open and fluffy as in the pictures.  I'm wondering what might have gone wrong.  One possibility might be the flour.  I'm in the States where we don't have Italian flour, so I used a good organic all purpose flour, because that is what Carol Fields recommends in The Italian Baker for panettone.  Might bread flour be more appropriate as a stronger flour?  Another might be the hydration.  I found the dough extremely moist and difficult to work.  Might the Manitoba w320 flour absorb more water than my AP flour?  Or might I have let the dough proof too long?  Have others used this recipe in the States with (or without) success?

Many thanks in advance,

that I made the Panettone a tre impasti.  Thank you for the detailed write-up.  Mine is here. 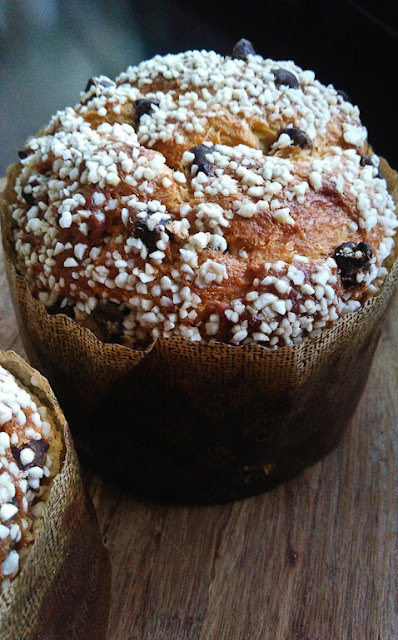 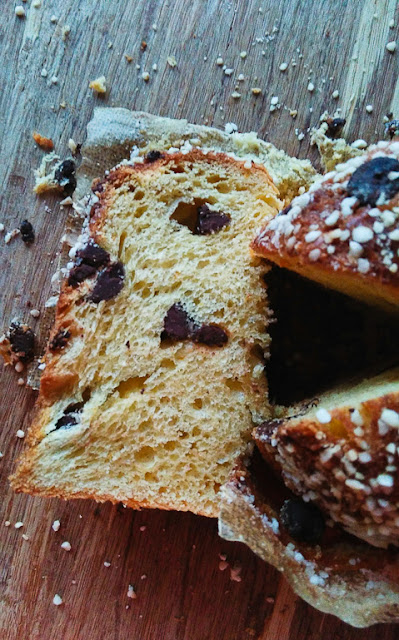 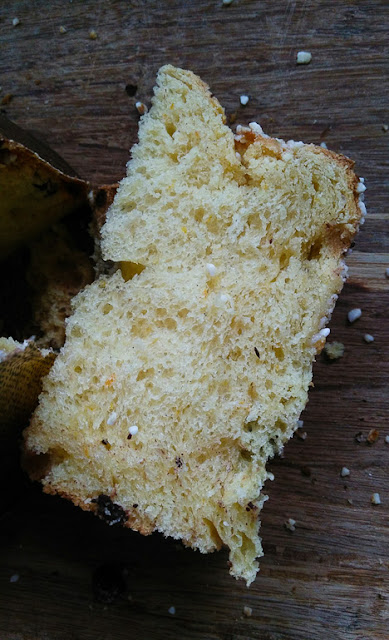