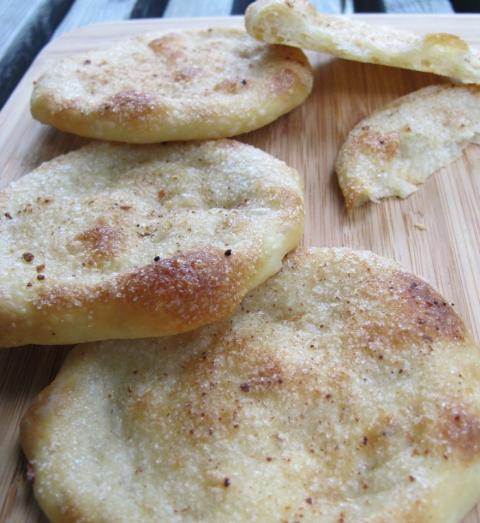 Our family traveled to Spain this past Spring, and Sevilla was our favorite city on the trip, we were there during Semana Santa.  We particularly enjoyed the Tortas de Aceite- yeast-leavened olive oil wafters laced with sesame and anise.  This version is a little different than the standard torta in that it is leavened with sourdough and uses star anise instead of anise seed. 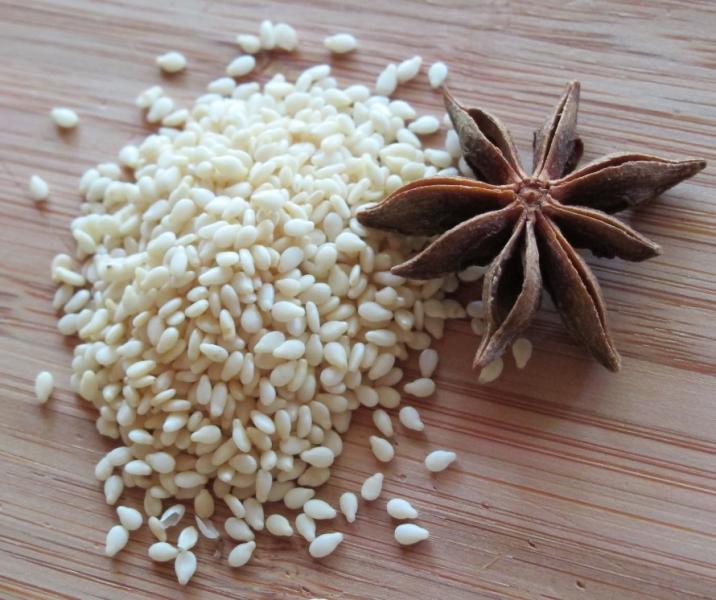 A view of the courtyard in Sevilla's Alcazar, the Royal Palace. 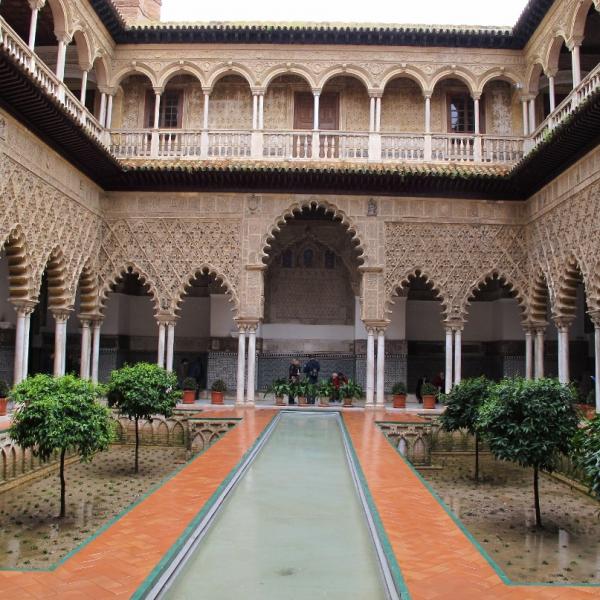 Mix levain, allow to ferment ovenight at 68-70F.  It should rise but not yet be fully mature.

Add 32g levain (the rest is for perpetuating the culture), water and oil to the flour mixture and mix until combined, then knead by hand about 10 minutes.

Transfer to oiled container and cover.

Ferment until dough has doubled, about 5 hours at 81F.

Using olive oil to grease work surfaces and dough, stretch and fold 3 times in first 3.5 hours, then allow to rise.  Ready when rounded peak reaches a little past 2 2/3 cups.

Divide and pre-shape into 12 rounds.  Place on oiled sheet pan and rest one hour, covered.

In spice grinder, grind star anise with 2 tsp sugar until fine, then scrape into bowl.

Preheat oven to 450F, placing rack in middle of oven.  Prep a half sheet pan with silpat or parchment.

Flatten dough balls slightly, then sprinkle the top with 1/4 tsp of the anise-sugar mixture.  Spread mixture over dough disc with fingertip.

Shape six discs into pizza-like tortas about 3 1/2 inches in diameter, then turn face down in sugar plate to coat with sugar.

Place six tortas on one half sheet pan and bake 8 minutes, then rotate and bake 3-5 more minutes, until nicely caramelized.

Don't be tempted to add the anise into the main dough- it has potent anti-bacterial and anti-fungal qualities and will kill off every discernable trace of sourdough culture (did this with my first go at these).

These re-heat and re-crisp beautifully in the toaster. 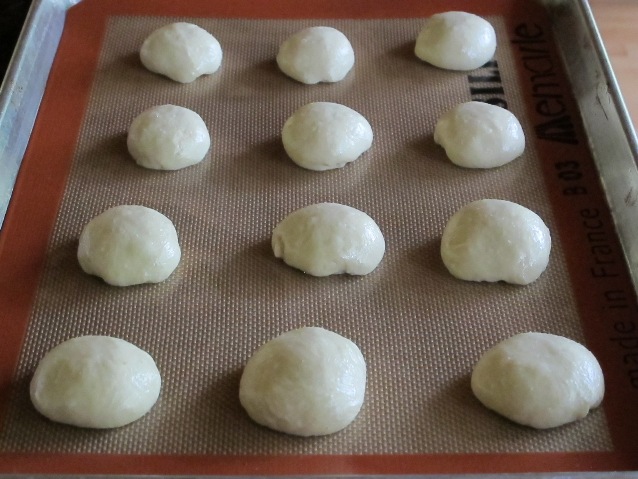 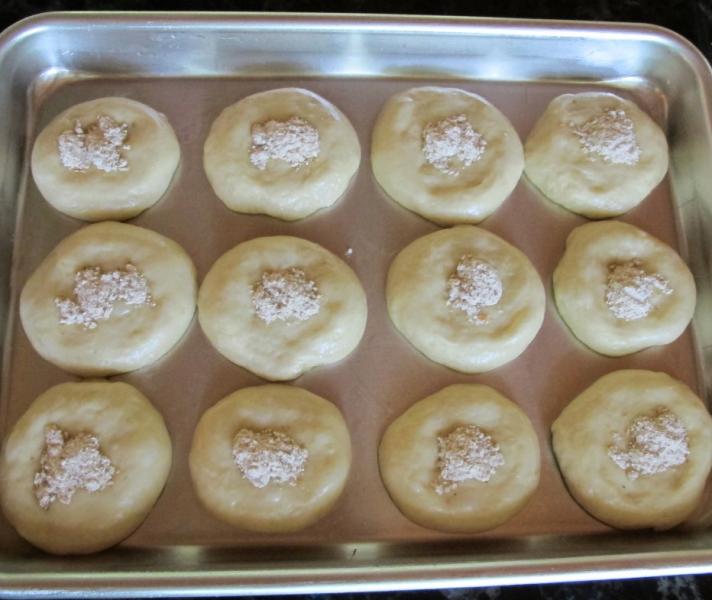 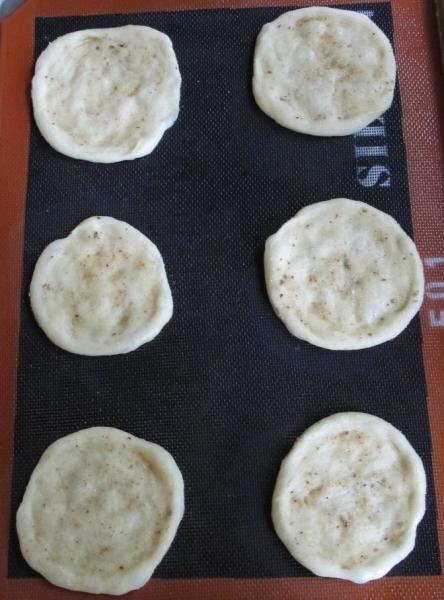 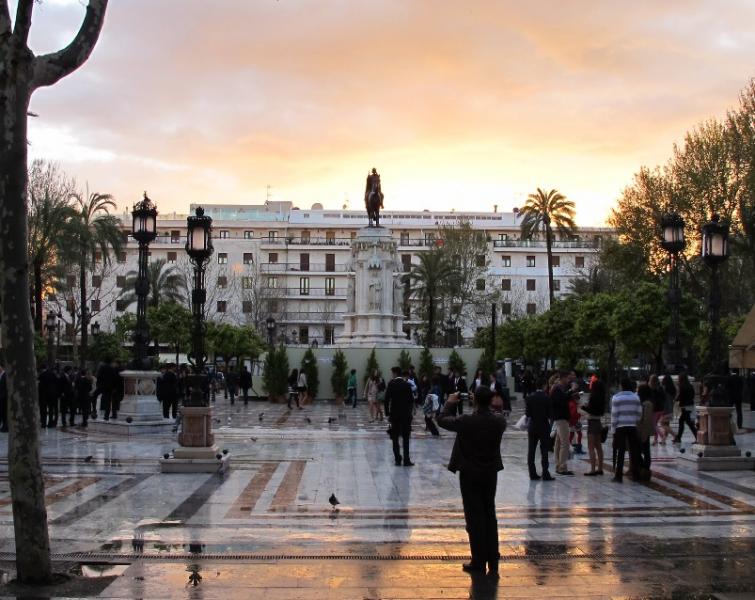 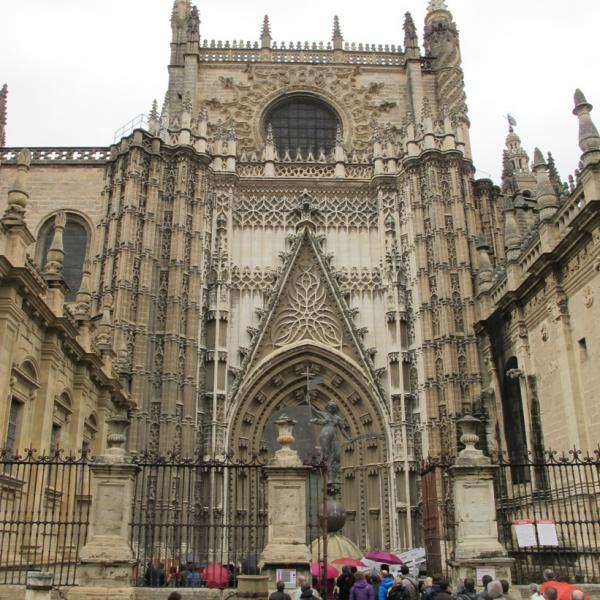 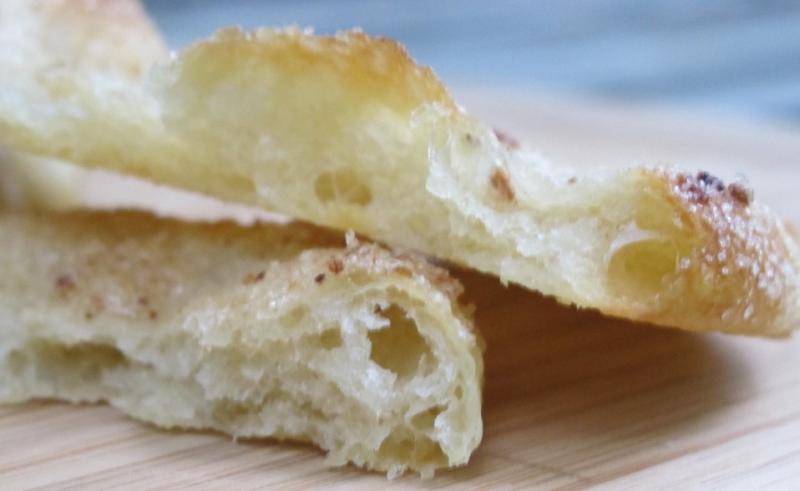 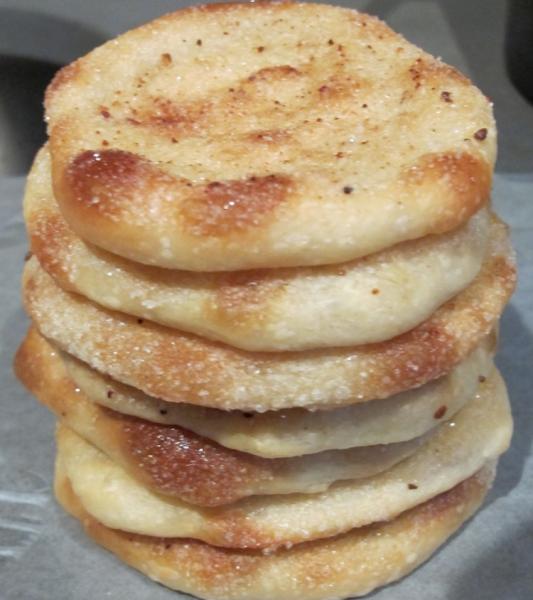 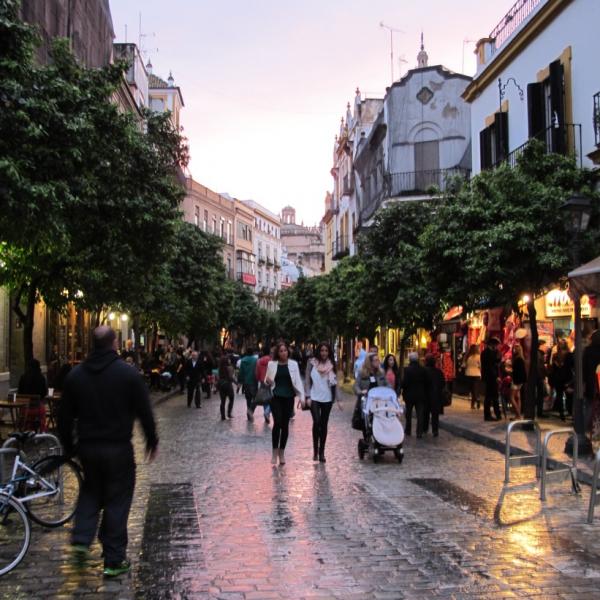 These look delicious and quite easy to make.  A nice tasty 'snack'.  They are now being added to me 'to bake' list :)

Love the photos too.  All so pretty especially the sunset. How pristine the royal palace is!  Wish I could boast the same for my home *^}

Thanks for the post and formula.  (I love the photo of the star anise with the sesame seeds too!)

Thanks so much, Janet!  As a snack, I find them a bit addictive- crisp, light and a little sweet, they have a similar appeal to good biscotti (but not as hard).  I made these a little smaller than the ones sold commercially so that I could enjoy one, then not feel too bad about going back for a second.  :)

These not only look great with the lovely toppings and crumb, they look so delicious!  I will have to put these on my to do list.

What lovely photos of your families vacation.  Thanks for sharing all.  Very nicely post!

Thank you Sylvia, we enjoyed Spain so very much!  Also visited Madrid and Salamanca, but the lively bustle and well-mannered, well-dressed people of Sevilla during Holy Week were very special.

Lovely post, and the tortas sound delicious.  Would you mind if I featured these on the homepage for a bit?

I'd be honored, thank you very much, Floyd!

desserts and snacks and not for sandwiches?  They sure look yummy.  I put anise seed in SD bread and never had a problem with it but will remember the pods antiseptic powers.  Your trip to Spain sounds lovely.  They could really use some tourists now with the economic and employment problems they are having - not that we aren't too - just not nearly as bad.

You can'[t help but love these little beauties.

Happy baking and congrats on the home page spread!

Thanks for the kind words!  Yup, dessert or snack, I particularly like them with coffee in the morning or tea in the afternoon.  They might also be good served warm from the toaster as a cookie-like side with ice cream, particularly lemon, orange, green tea or coffee/mocha.

Spain was so enjoyable, and despite high unemployment, etc., the people were wonderful and we encountered none of the problems one might expect with economic adversity.

Lovely bread and cathedral.   Looks like those would vanish in an instant.  -Varda

Thank you, Varda- they do vanish quickly, might have to double my next batch :)

I agree with Janet - these are definitely on the "to bake" list... Bookmarked the page... I think We 3 gmas can learn something from you for sure.

Wow, thank you!  They are tasty and light, hope you enjoy them as much as we do!

Those look great.  Thanks for sharing your visit to Spain and beautiful photography.

Thanks so much, Ian- this was the trip that pre-empted the TFL get-together. Glad you like the photos- still learning about pictures, but enjoying it.

for inspiring adventures in the kitchen, upon returning home.  In fact, it was a trip to Switzerland in 2007 with my kids that started me on levain breads (I had baked straight dough breads since I was a teen).  We had just walked out of a bakery, the five of us ripping into a crusty loaf, when one of the kids remarked, "Gee, Mom, why can't you bake bread like this?" "Yah, Mom!  You make good bread, but this bread..."

How could I resist this challenge?  When I came home, I began my starter and the rest is history.

I had to bookmark this page too--your photos are fabulous and the tortas look delicious!  Thanks for sharing your vacation with us. Glad you had a wonderful time!

Always interesting to hear how people get started with sourdough!  For me, it was learning how to make pandoro and panettone.  Thanks for the lovely comments :)

Damn those look good!  Definitely going on my "to bake" list.

Thanks, Dan!  Mine are all gone now and my daughter is already asking when I'll be making them again :)

Those look great! So, are those often eaten plain? they look lovely.

Thank you, Khalid.  They are sold in little wax paper sleeves and often eaten out of hand while strollng around the lively old town of Sevilla.  I believe that Whole Foods has begun to import them under the brand Ines Rosales, and this recipe is a good approximation of that Torta.

I'm thinking of trying them warm from the toaster oven, paired with something cool and lemony, perhaps green tea/lemon ice cream.  The star anise has a lemony undertone that I'd like to bring out.

Those look very nice! Delicious! the photos are great too!
Toro! Toro!

Thanks for drawing attention to these lil luvverlies, FlourChild - and for your fabbo food and travel pics! I'm with everyone else - straight on to my must-bake list. Always looking for novel ways to use sourdough, and this looks like a keeper.

Thanks, Ross!  I like to use my sourdough starter as often as possible, too, keeps the culture nice and healthy and minimizes discards.

tortas and photos! I can't add to what has already been said, but wanted to add my voice - must try recipe, and must visit Seville!

Happy you enjoyed the write-up :)  Thanks!

Like Jweissmn, I tried these and found they were easy to make and delicious but not as light as yours. Great instructions, and the dough was a joy to handle, right up until the very last stage of adding the spice and sugar toppings and shaping the tortas. Actually I did have to do it that way around, as once they were shaped, they were too soft and floppy to get into the plate of sugar and out again onto the baking sheet with any degree of success.

Any thoughts on what I might do to improve things? I would be so proud if I could turn out some like yours - so light and flaky!

Thanks for a fantastic recipe!

Glad you found these to your liking!  I do add the star anise topping while they are still in ball form, and find that it spreads out nicely as I stretch these to shape.  But that part probably isn't what you are having issues with.

The dough is soft, no way around it with all that olive oil in it.  And reducing the water will tend to compress the texture.  I handle the dough very gently and use olive oil on my hands and work surfaces to prevent sticking.  Perhaps instead of flipping them over onto the sugar plate, you could try shaping the discs directly on the silpat on which you'll bake them, then sprinkle a bit of sugar over top.  I did this with an earlier version of this recipe and the only difference is that the distribution of sugar tends to be a little less even.  I think the less you handle them during shaping and the more gently they are handled, the better and lighter the texture as more of the holes remain.

Good points.. I'll give all of those ideas a try - they make perfect sense to me. I also wondered if I had perhaps overdone the initial kneading a bit. I got a better windowpane than I ever have before, quite amazing - but with 3 stretch and folds still to come, it might have been rather too much.

I'll let you know how it goes,

You may be on to something- I have fairly soft hands where bread making is concerned, it would not surprise me at all to find that plenty of other people knead more vigorously and/or handle the dough less gently during shaping than I do.

I also wondered about the flour- mine is an unbleached flour with 10-10.5% protein, if you used something like King Arthur unbleached, which is higher in protein, that would also tighten the crumb.

I'm going to start another batch today, with gentler kneading and shaping. I'm not sure about the protein content of the flour. I live in the U.K. and I used an unbleached Allinson flour. It's a plain (all purpose) rather than a strong (bread) flour, but I'm not sure of the exact protein content. It shouldn't be too high, but I'll see if their website has any more information.

Okay Julie, these are gong on the list for tomorrow! I have family in Spain, but have never been to Sevilla. I guess I must add that to my list as well. I see star anise here occasinally and have never cooked with it. Interesting!  Brian

WHAT ARE THE SMALL WHITE PELLETS NEXT TO THE STAR ANISE POD?

sesame seeds, part of the traditional flavoring for these tortas

flourchild: These look perfect and your photos are fantastic. I will definitely make these at some point as they look like a wonderful, light dessert to me.  I hope they look as good as yours!  I have not baked with star anise.  I am always looking for something to bake for family and friends in the UK when we visit.   I don't have a spice grinder in the UK, but I do have a mortar and pestle....so I assume I could grind the sugar and star anise the old-fashioned way?  I have been to Spain a number of times, but not Sevilla.  I think you have moved it up on our list, as my husband and I have talked about going there. Thanks again and congratulations on this wonderful bake.  Best,  Phyllis

Phyllis, these will work just as well with anise seed, which will be much easier to grind in your mortar and pestle.  Anise seed is the traditional flavoring, I used star anise because I favor it and had some good quality spice on hand.  Good luck!