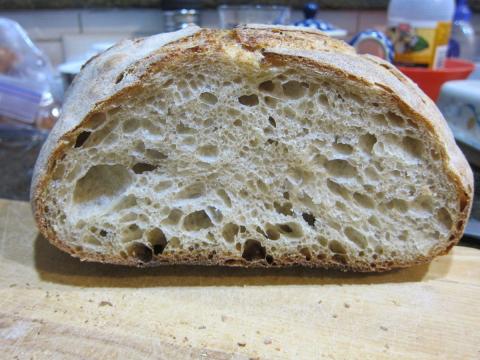 After my previous sourdough loaf that I baked in a pot came out so pretty, I went out and picked up another cheap enamel pot so I could use this technique with two loaves at a time. 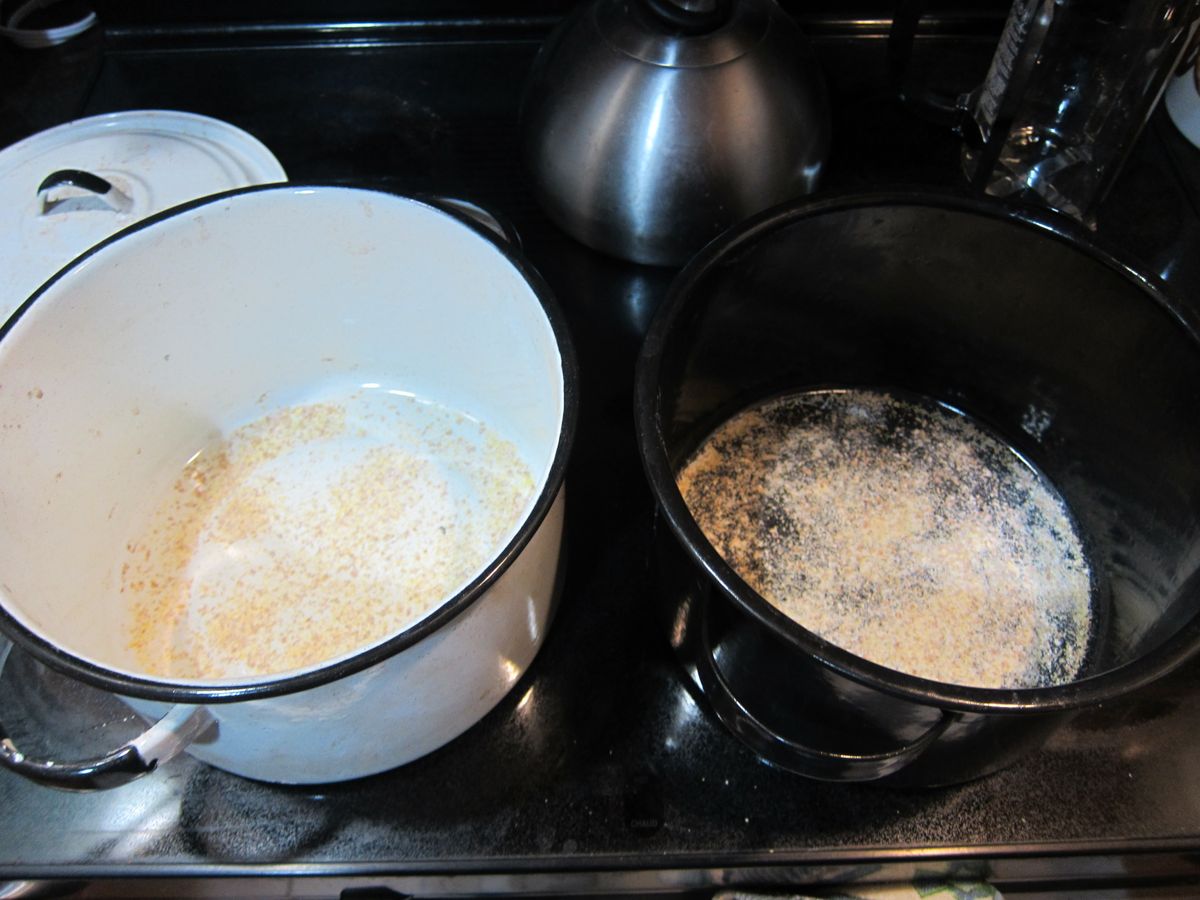 This technique works well for me and is unlikely to damage the oven in the apartment we are renting. 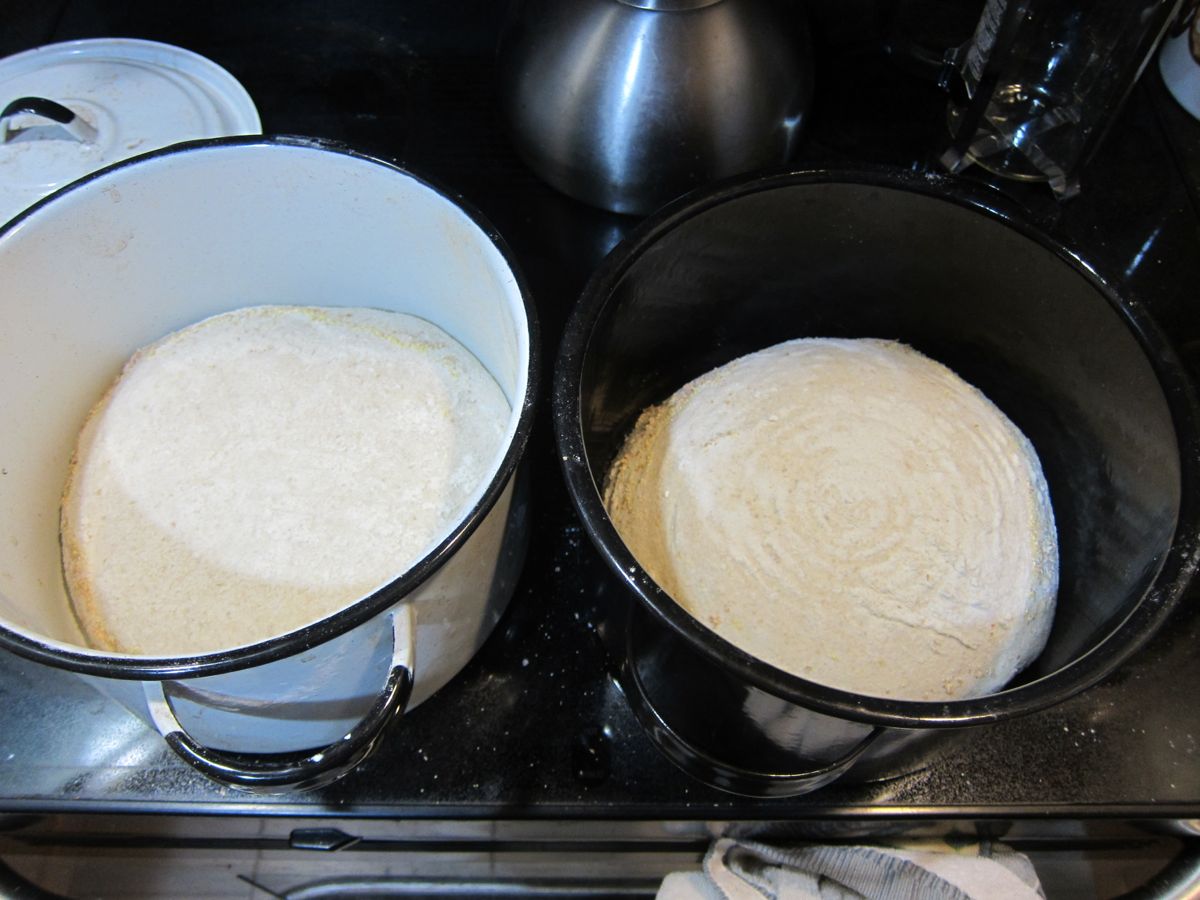 My loaves this time were around 73% hydration, a little wetter than last time. My formula was:

I stretched and folded twice about an hour apart, then took advantage of the cool weather we were having to ferment the dough slowly outside for another three hours.  I brought the dough inside, divided and shaped it, and then gave it just over an hour for the final rise. 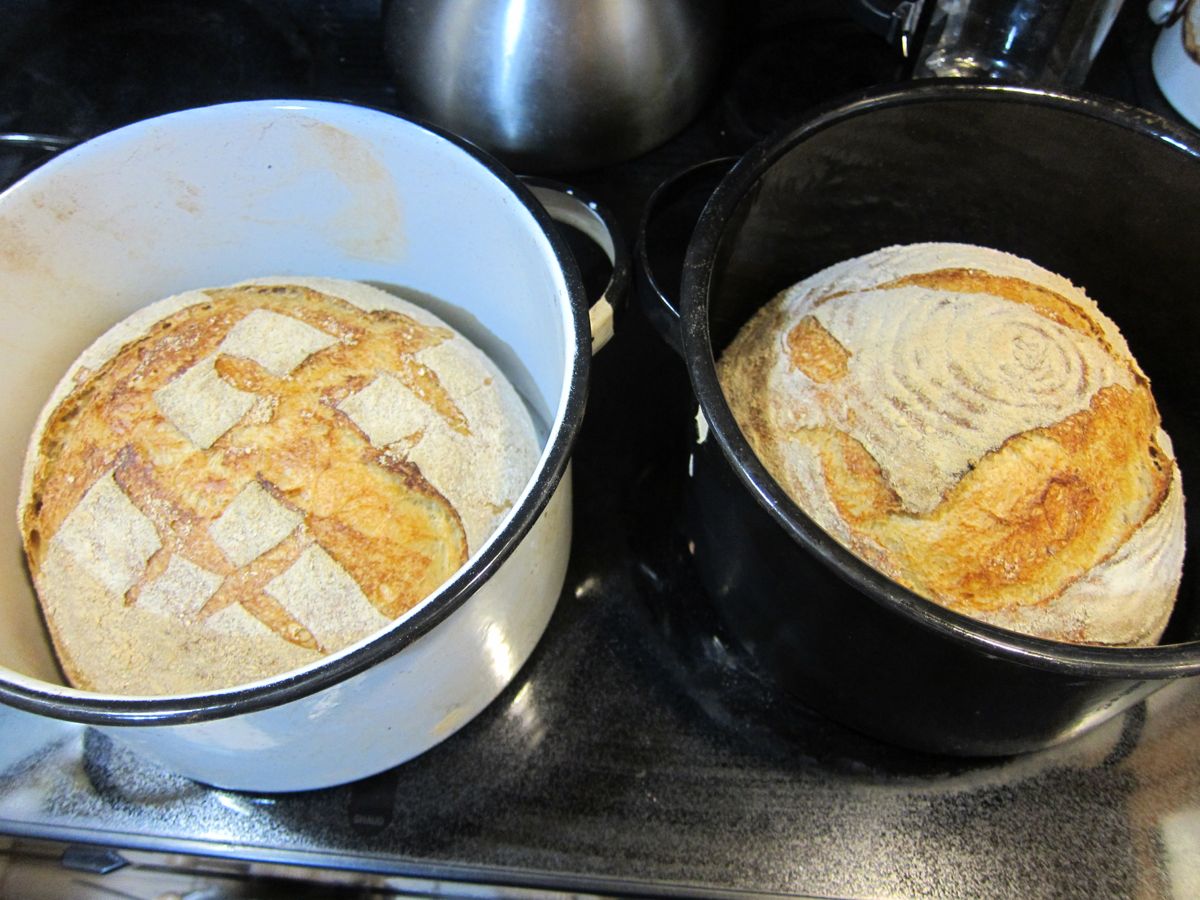 Baked in the covered pots at 465 for 15 minutes, then reduced the temperature to 435.  I removed the lids at the 30 minute mark, baked them another 20 minutes before turning the oven off, and then removed them from the oven 10 minutes later (1 hour in the oven total). 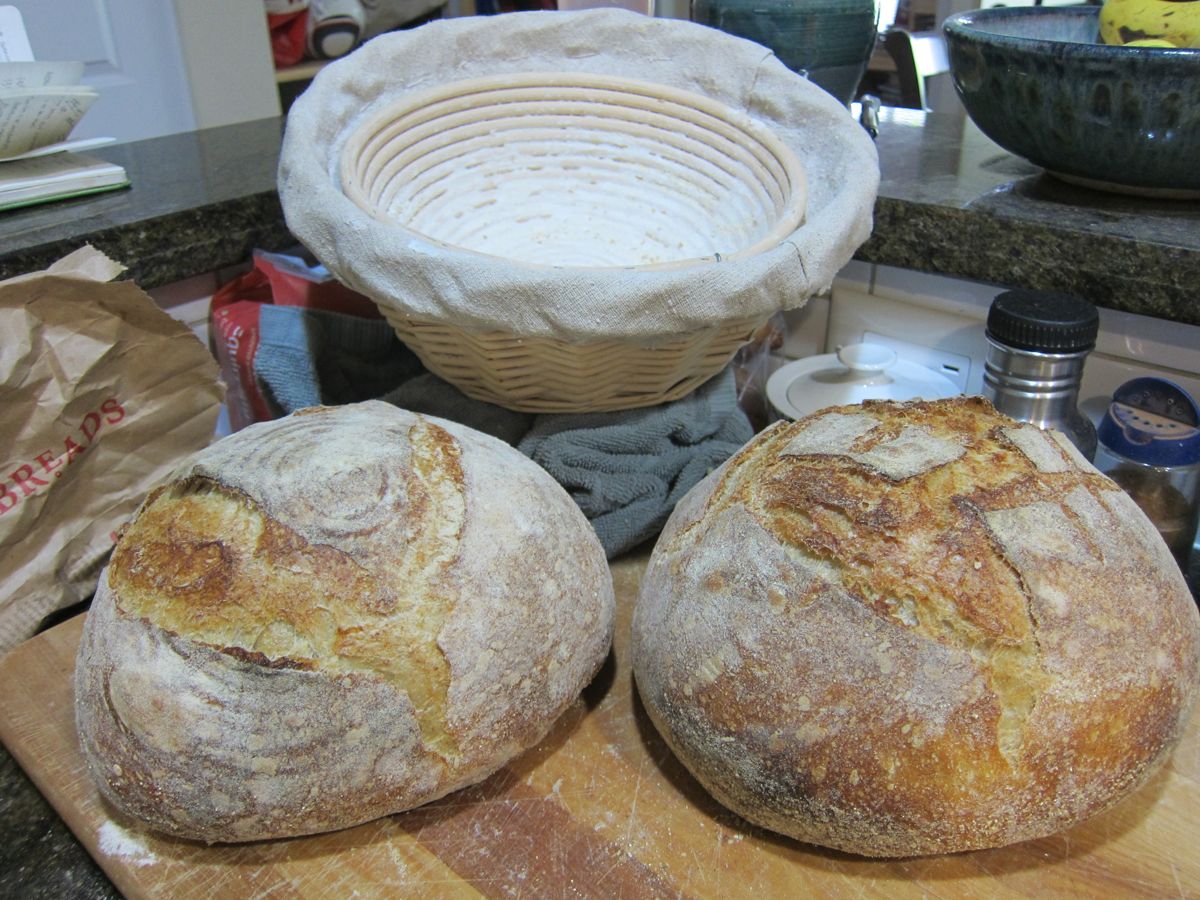 The flavour was better on these than the previous loaf, and the crumb was more uneven too. I'm very pleased with this one. 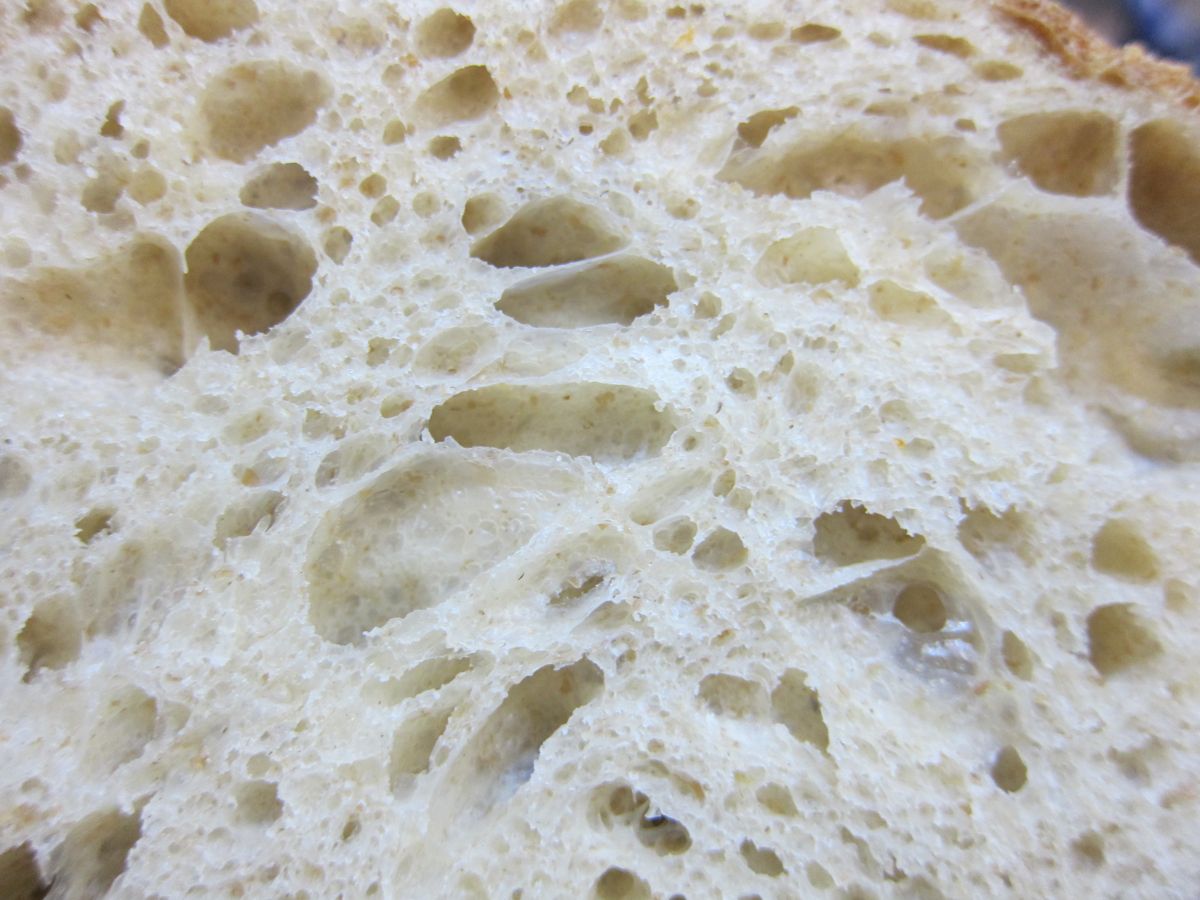 Your crumb is much better than Sprout's SFSD and I bet it tastes better too!

That's a very nice crumb! How do the enamel pots compare against cast iron? My claypot DO works very well (at least over other methods I have tried), but I am looking for something in oblong shape to match my banneton. If enamel pot works as well as CI, then it might be a cheaper option and it will be lighter to handle.

I'm sure thoroughly preheated iron or clay, something with more thermal mass, will give you a bit more spring, but I'm more than happy with the results I'm getting with these.  It's also nice not having to worry about the long preheat or cooldown that you do with something heavier duty.  In my circumstances at the moment, those conveniences outweigh the benefits.

Had to chuckle at you going out to find another pot....Something I find myself doing too when I like the results I get when baking.

Last item I did this with were flower pots.  Made my own cloches for less than $6.00 each :- ) and they work great!

Your loaves are really nice and I am impressed with how well they made the switch from your baskets to the pots.  I never got the hang of that and mine always ended up lopsided....Guess I should have practiced more.

I made two more loaves tonight.  One came out pretty, but one of them slid into the side of the pot and stuck when I tried to depan it.  It got pretty mangled in the extraction, so we were forced to eat it right away. ;^)

Try a clay chicken roaster, they are oblong and hold heat well.

pretty indeed, getting very consistent and confident as well. really u made it so effortless yet perfect.