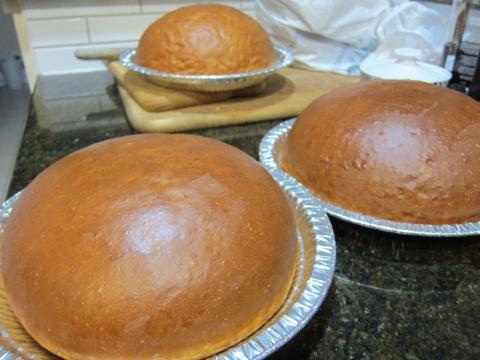 I only recently discovered that one thing that doesn't appear to be available in Canada is Hawaiian Sweet Bread.  At least on the West Coast in the US, King's Hawaiian bread is easy to find at most any grocery store.  It's something I grew up with and that I associate with being a kid and snacking on in the car.  We certainly fed it to our kids a number of times on road trips.

I've tried making Hawaiian sweet bread a couple of times in the past.  While the flavour was right, I've never been able to get close on texture. 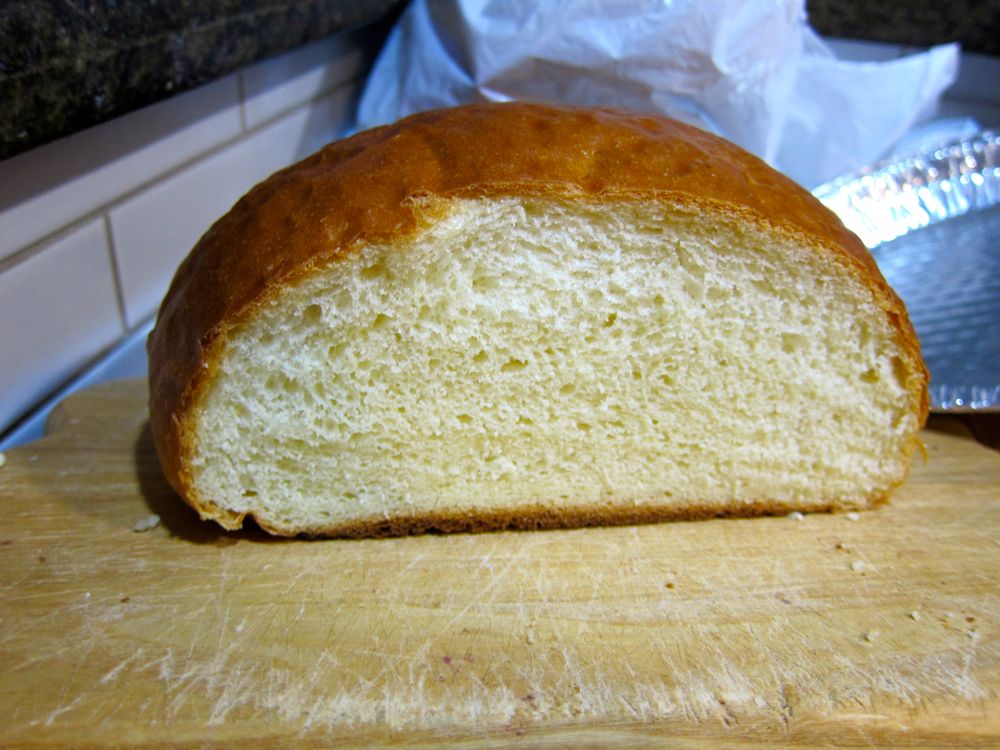 all of the tangzhong

1 more egg, beaten, for the eggwash

The tangzhong I made the same as the previous time: 1 cup of liquid (milk or water or juice) to 1/3 cup flour, or a 5 to 1 liquid to solid ratio (so 250g liquid to 50g flour) and mix it together in a pan.  Heat the pan while stirring constantly.  Initially it will remain a liquid, but as you approach 65C it will undergo a change and thicken to an almost pudding like consistency.  Here is a video I made of it undergoing that change.

Let the tangzhong cool for at least a half an hour, then combine it and the rest of the ingredients.  Mix it very well, for 10-15 minutes with a standmixer.  Cover and let rise until doubled in size, approximately an hour. 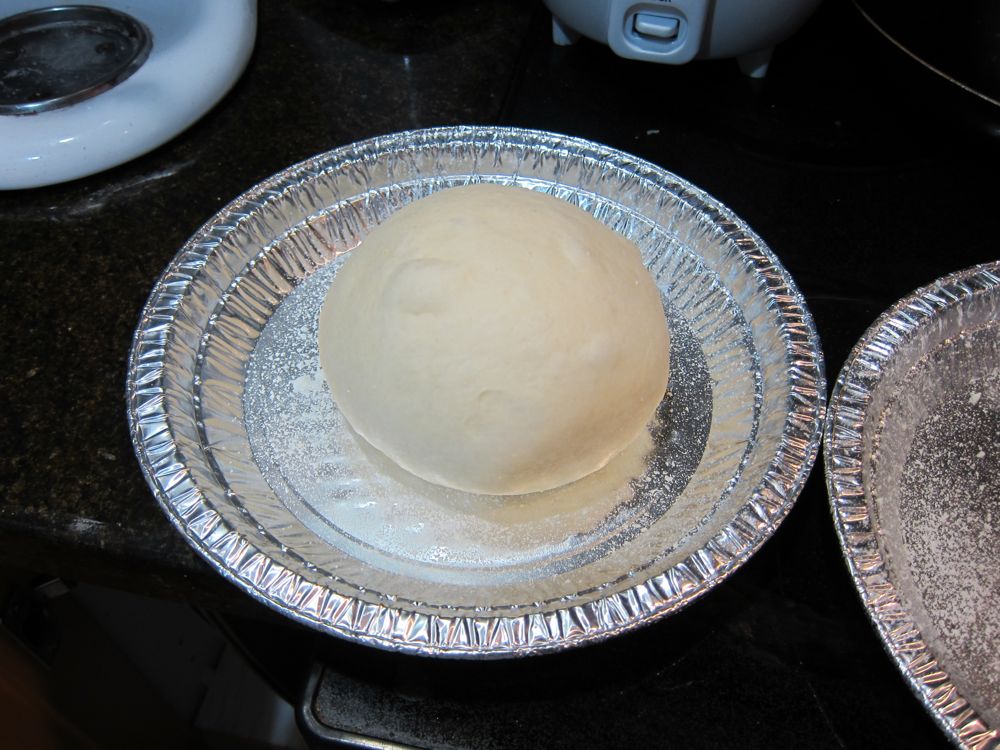 Divide the dough into three even pieces.  Place them in greased pans, cover loosely, and let them rise for 45 minutes to an hour until they are approaching twice their original size.  Glaze them with eggwash before putting them in the oven.

Bake at 350 for approximately 45 minutes.  If you can, cover the loaves with a pan or foil for the first ten minutes to trap some of the steam in with the loaf and to keep them from browning too quickly.  I acually used a large metal mixing bowl which I inverted over each loaf when placing them in the oven. 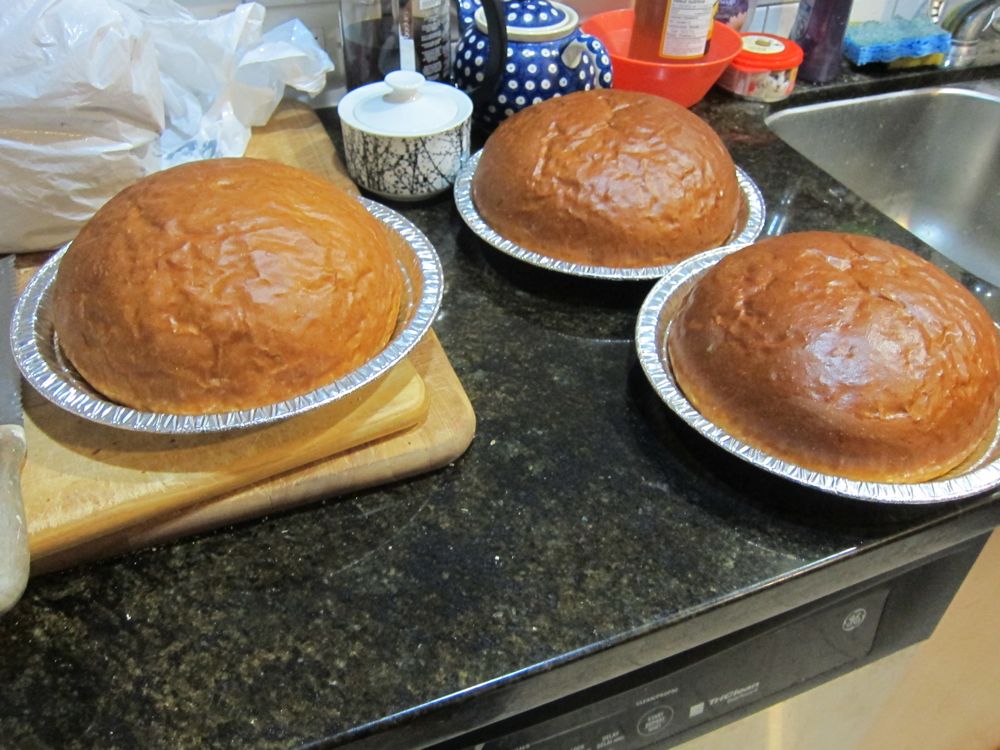 It looks like you baked them in disposable pie plates.  What size did you use.  I want to try the recipe.  Do you recommend any other type of pans?

Yes, I used disposible pie plates because that is what I had in the house and that is the way King's loaves come.  They don't say how big they are, but I'd guess 8 or 9 inches? They're just whatever I happened to find at the grocery store last time I needed some.

Love the baking pans too!

Such a nice bread! Last time I inverted a metal bowl to trap steam, I smashed one  side of the boule . Goes to show the vast difference between knowing a theory and knowing how to execute it well ;)

Sweet! they look really authentical, Floyd! are they that good, to be eaten plain?

Yes, we've been eating it plain or lightly toasted.

for the reply.  I think I'll use the pie pans.  Am going up to NY next month, so think I'll bake some and bring as gifts.!

Floyd, after watching you stirring the tangzhong with a fork, I can only IMPLORE you to buy a medium whisk for this task! Whisks are so much more effective, easier and easier to clean than forks.  Heck, I will buy you a couple of whisks to try . . .

I was interested in your tangzhong milk bread and it is on the list to try, but I may have to try the Hawiian sweet first.  My latest favourite bread is PR's soft white bread from ABED.  I have cut the sugar by 1/3, kept the honey and oil full and baked these as pull apart dinner rolls which have been fabulous!

I will try my next dinner roll recipe with this recipe.

Ha!  Funny story about that.  I have a whisk... possibly two? But we moved from a house in Oregon to a furnished apartment in Vancouver, BC about a year ago.  Most of our possessions remain in storage in Oregon.  Since the kitchen in Vancouver had implements in it I didn't bring a whisk, figuring there would be one in the kitchen here, but there is not. I'm to frugal to buy another one when I know I already have two, even if I don't have them at hand.

Later this month we are going to back to Oregon to visit friends and bring the rest of our stuff up here.  When we do, I'll have access to the rest of my kitchen gear and definitely will be retrieving my whisk!

Floyd, I would be doing exactly the same thing as you if I were in the same situation!  Too funny.  I have another batch of dinner rolls going to which I have added some tangzhong, in more or less the proportins of you Hokkaido milk bread recipe.  I am most interested in the result and comparing with the original recipe.  I will post the result.  Brian

Floyd! I'm frying bacon while the bread dough is rising. The whole house smells like citrus and smoked meat. It's a better smell than my Momma's Chanel #5 perfume!

is there a trick to this roux? Do you thicken with the milk first then add the pineapple juice? I just added juice to milk and the milk curdled. Then added the flour. Got a roux but don't know if the taste will be off