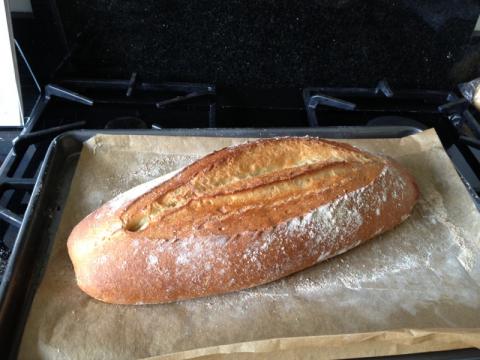 Was it beginner's luck?

In my previous and first post on The Fresh Loaf, I described my experience of baking the introductory loaf from Floyd's handbook.  This was my first attempt at Artisan Bread, and I liked it!

Well, that was yesterday, and today I had another go to see if I had gotten lucky first time around - to my surprise it seems to have turned out even better!  As mentioned in that post I wanted to make a couple of changes, and also thanks to the comments from that post I realised that the sticky consistency the dough starts off as is to be expected.  If this is a 80% hydration recipe, then I'm glad I didn't know that at the time - ignorance is bliss!

I still followed Floyd's recipe closely, but this time I used 335g of Strong White Bread Flour (35g more than previously) with 240ml of warm water.  Whilst it was still very sticky to start with, I didn't panic so much and only added a tablespoon of extra flour to the work surface twice to keep it manageable.  In fact, by about 6 - 7 minutes of kneading I needed to add some water to my fingers to loosen things up a bit.  The dough definitely was more silky and stretchy this time around and in general more manageable - plenty of practice still needed but I'm encouraged

It proved again for 2 hours, and then after shaping another rise of 1 hour.  I kept the oven temperatures the same as yesterday (220C for the first 5 minutes, and then 200 for the remaining time), but added an additional 5 minutes, so a total of 25 minutes.  I did the steam technique again, but this time I didn't not use boiling water, and I didn't really get a big release of steam, so I think next time I will always go with boiling.

At the suggestion of Simon3030 I left the loaf in the oven with it off for an additional 5 minutes to crisp up a bit.  The crust certainly was more of a golden brown colour this time, and I must have done something right with the kneading as it grew much larger in the oven.

Here is my first and second attempt again showing the difference in size of the loaf.  Amazing what some additional kneading can do!  The second loaf crust is darker although the pictures don't really show that. 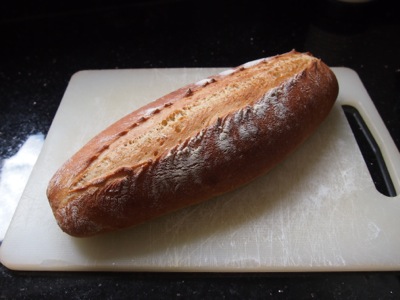 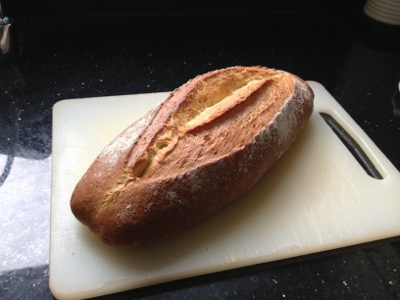 We were good and let it cool completely this time before eating it tonight (helped by my wife having baked some Apple and Raisin Muffins!).  The most important thing was it tasted great - less doughy than yesterday, so well cooked.  We also toasted some of it and it made pretty good toast too!  There is even a little left over for breakfast tomorrow so I'll see how it keeps overnight.

Here is a picture of the crumb texture before it headed off to the toaster - a few holes, not sure where they came from?! 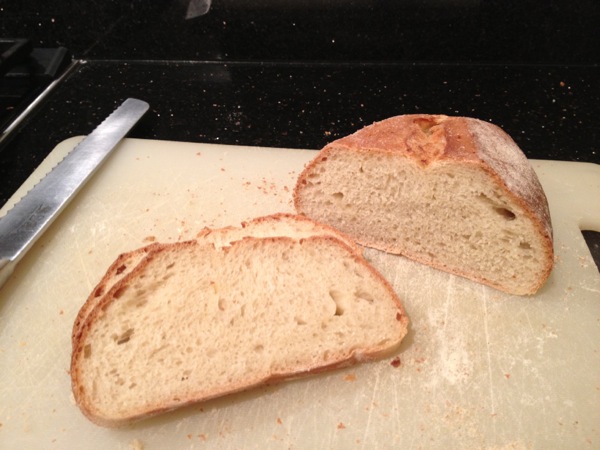 I obviously need to keep practising the basics on this recipe - it seems to be quite forgiving.  But sadly the weekend is over, so that will have to wait until next weekend.  I think I'm going to look at three variations on this unless the experts on here suggest otherwise:

I'm also on the look out for a good (but simple) sandwich loaf (nice and soft) that my one year old can eat instead of the supermarket sliced he currently has.  Any suggestions?

Thanks again for the encouragement, comments always welcome!

Barry, I have good luck with the 3 Hour No Knead White bread from Wandering Bread, a TFL member. I make it for my 83 year old neighbor who claims she can't eat seeds, and also for my grandgirls who like it for toast. I'm sure if you type in Wandering Bread you'll be able to find it, A.

Thanks Annie, I've found Wandering Bread's recipe. The shaping of the loaf looks very fancy, I think I'll keep it simple to start with!

Hi Barrie, glad you found the recipe. Yesterday I just made 2 boules and put them side by side, that way my neighbor can freeze one for later, but I usually shape it as one loaf.  Be sure to share your results, A.

To use poolish sounds good (bigger holes in crumb).

First, let me describe how I think about the concept of bread. I've said this before so it may be familiar to others but it really helped me learn to manipluate ingredients.  Bread is a matrix of netting (in the form of gluten) and gel (the starches that form when flour is wetted). Yeast produces bubbles of gas that are trapped and it is the interplay of these concepts that form the crumb of bread. Higher gluten flour produces more "netting"(like rubberbands) and probably a little less gel. So the crumb made from a high gluten flour will be chewier and maybe even tougher. So,essentially, bread flour (which has a higher gluten forming capability), makes a chewier type crumb and it may be a little more thirsty that AP flour.

Whole Meal flour is a whole different learning curve, as is rye. There are different techniques to get the best,fluffiest loaf. Completely do-able but it is not just a substitution. The bran bits in even the finest ground wholemeal needs soaking time and extra water to get a non-crumbly loaf. My favorite and worth the extra lessons.

I use a preferment (poolish) for all my loaves since it really enhances the fermented flavors. I use 1 c (qbout 140g) flour,1 c (about 225g)water 2-4 tbsp (about 50g)sourdough (small amount yeast can be used instead) and let it sit overnight. Add to the dough the next day and all kinds of deliciousness occurs.

Have fun-bake often and pay attention to what happens.

Interesting analogy!  So if I've understood this correctly, if I include AP flour, say 50:50 with bread flour, I may get a softer loaf but as the AP absorbs less water I would have a stickier dough to work?

So many variables for so few ingredients! But I suppose that is part of the fun!

35 g of flour will do to a 80% hydration recipe :-)  72% hydration is still a slack dough and plenty difficult to work with.  It is also the perfect hydration to do slap and folds with instead of kneading and do stretch and folds to learn what those methods are all about adn how theyu will improve your bread.  This is a much nicer loaf of bread than your first one don't you think?  I'm sure the next one will be even better.

Yes, I thought my first loaf looked good but this one turned out even better!

I will have to look around on the fresh loaf for articles on slap and fold kneading techniques.

Not your typical mooncakes
Beer Bread with Spent Grains