After Easter extravaganza of hot cross buns, marzipans & lamb roast, it is time to at least make an effort to eat less heavy stuff. Which bread to start the new week? I remembered this recently revived post on flaxseed bread  : http://www.thefreshloaf.com/recipes/flaxseedwheatbread

Read both Dan Lepard's recipe and Floyd's version, with all the comments, once again. The bread seemed exactly what I was looking for. I adore flaxseeds and they are part of every multigrain mix in my breads, but had never used in such high proportion or as a star ingredient. The comments from many TFLers about the bread being dense made it challenging enought to give it a try. So here is how it went -

I kept the basic quantities in the recipe. I have promised my husband no seeds in bread for few more days, so I settled on brown flaxseed meal. I was not ready to use flaxseeds without any pre processing. Used 100 gms flaxseed meal and made a hot soaker with 100 gms water. Kept  it in warm oven for 4 hours. Decided for RYW levain instead of IY. Along with soaker, made a RYW levain of 50 gms WWF & 50 gms RYW. The next question was to knead or not to knead. The more I thought over it, kneading seemed to be a better way. Kneading is delegated to my BM as it kneads better than me (or so I tell it to make it feel motivated).

After 4 hours, the levain was ready. I dumped the levain, soaker, 200 gms BF, 2 tsp agave nectar, 1 tsp salt and 100 gms old refrigerated stock of RYW in BM and set it on dough cycle. I did not consider the water in soaker in my final hydration. Decided to add extra flour if needed. But did not need - the dough was beautiful as is. Soft, tacky and extremely easy to work with (ok so my BM did most of the hard work in the first half, but still it was a pleasure to watch the dough being kneaded). Checked after kneading was done to see if extra cycle was in order but it was good to rise. Did bulk ferment in BM itself. Looking at the dough after kneading was done, I was expecting a decent rise, but knowing the high amount of flaxseeds, would have been happy with anything between one and half times to double. At the end of dough cycle, it had more than doubled. Happy time.

Took out the dough and shaped roughly into a ball to give bench rest of 30 minutes. The dough was so easy that it did not need any flour or oil on work surface. The dough shaped beautifully with slightly wet hands. Put my claypot in oven to preheat at 500F. After 30 minutes, shaped the dough in a tight ball and placed in proofing basket, which was generously dusted with rice flour (didn't want to repeat my earlier blooper, but in this case it was probably excessive). Kept the dough seam side down as I didn't want to score. Another 30 minutes and the dough was ready for oven. Inverted on parchment paper, reduced oven temp to 475F and put in closed DO for 30 minutes. When I removed the cover after half an hour, I had to do a happy jig. The oven spring far exceeded my expectation. Kept for another 20 minutes uncovered at 450F. Then kept in turned off oven on rack, with door partially open for 30 minutes. Cooled overnight on wire rack. Today morning cut into a crusty and surprisingly light bread, which tastes amazing. Of course, it is not as light as white bread, but for this amount of flaxseed meal, I feel it did a great job. Thanks to Floyd & Dan Lepard for this winner. Here are pics of loaf and the crumb shot : 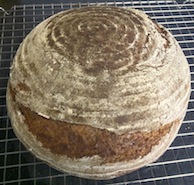 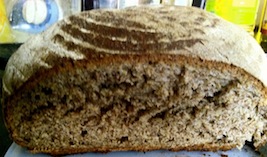 RYW, flax seed and WW sure looks like a great combination.  You did an good job with thsi bread inside aand out.

Thanks, dabrownman, for your kind words.

I have flax seeds and flax seed meal but have nto used either yet so you are reminding me to give it a try soon.

Thanks a lot, Ian. I am sure all your exotic flours will give flaxseeds the extra boost. After working with flaxseeds as main ingredient, I realised it is one of the most forgiving ones. The dough looked like it could withstand a large margin of both hydration and kneading on either side.

Nice bake!  I love using flax seeds in baking.  Toasted, they have such a surprisingly pronounced nutty toasty flavour.  Lots of punch in those little guys.

Thanks, John. I have not used toasted flaxseeds in bread. Next time will give it a shot.