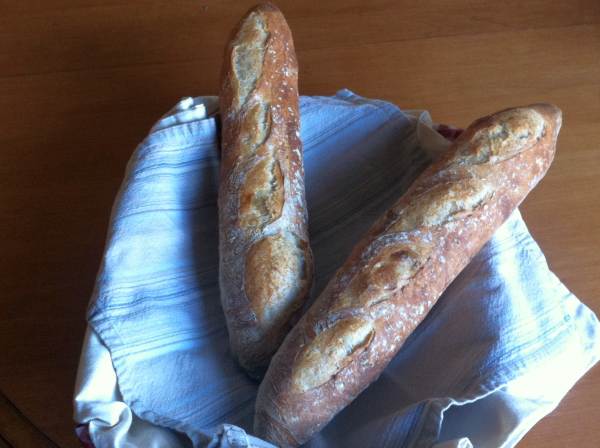 Like many members of this forum I have a lengthy to do list of breads and pastries that I intend to make at some point in time. Making a focused effort at baguettes has been on this list for far too long and I decided late last year it was time to finally do something about it. Baguettes aren't my first choice for a daily bread because they stale so quickly, but they are great to serve just a few hours out of the oven when we have friends or family over for dinner. I've never been truly satisfied with the results of the baguettes I've made in the past, primarily because of the poor crumb, but shaping and slashing were factors that needed attention as well .

Off more than on over the last few months, this project has taken longer than expected for a number of reasons, work, vacation, etc, but over the last few weeks I've managed to get back on track with it and make what I feel is some progress. The formula I was using was based on Jeffrey Hamelman's Poolish Baguette from his book “Bread”, (pg 101) the one minor change to it initially being my addition of a small percentage, (6%) of either light rye or whole grain spelt to add a bit more overall flavour. After two mixes following JH's procedure the crumb was slightly better than any previous result I'd had but nothing close to what I'd hoped for. 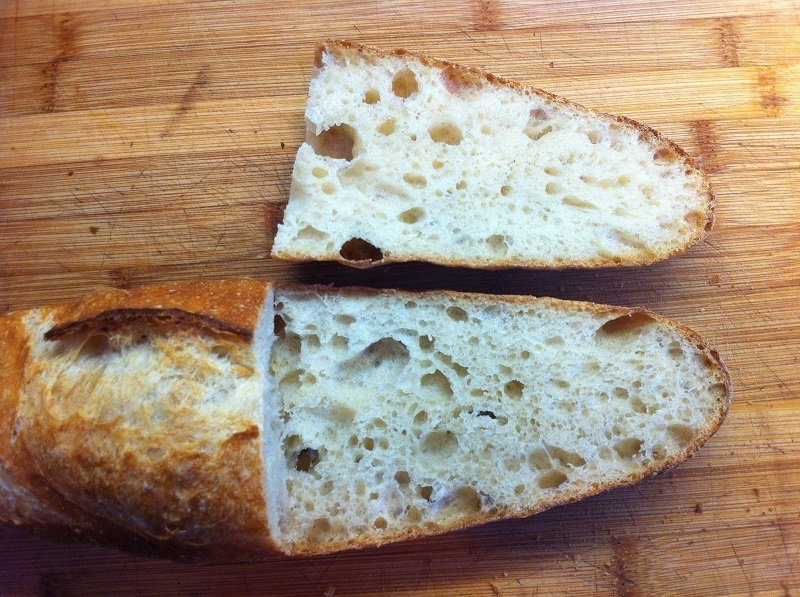 JH's procedure doesn't include an autolyse in it and I wondered if that might help loosen things up a bit. The next mix was given a 60 minute autolyse which did help open the crumb, showing a few more holes of various sizes, still not as many as I wanted, but better. The white flour I use is from a company here in B.C. , Anita's Organics which is milled from spring wheat and has a protein content of 13.3% with a fairly strong gluten level. I felt this was the most likely suspect for the crumb/hole problem I was having and my suspicion was confirmed after reading Hamelman's section on wheat, specifically paragraph 2-page 36 of “Bread” where he says (paraphrase) that high gluten flours (from spring wheats) in general do not support the long fermentation associated with hearth breads. For better or worse this is the type of flour I had and somehow I needed to find a way to make it work as best as I could. Thinking back to some breads I've made using this flour that had a wide open crumb I remembered that they'd either had a long retarded ferment or high levels of preferment included in the mix. The bread that came to mind first was Hamelman's Pain Rustique, a bread that uses 50% of it's flour in prefermented form and has a crumb with lots of random sized holes and excellent flavour. Since I wanted to avoid an overnight fermentation if I could, I decided for the next mix that I'd increase the poolish from the 33% I'd been using till now, up to 50% and see if that helped in generating more holes. It was one of those classic Aha! moments when I took a slice off the top of a loaf from this new mix and found holes...lots of nice holes! This is better I thought, but just to be sure I did another bake later that week using the same formula and procedure as the last one. 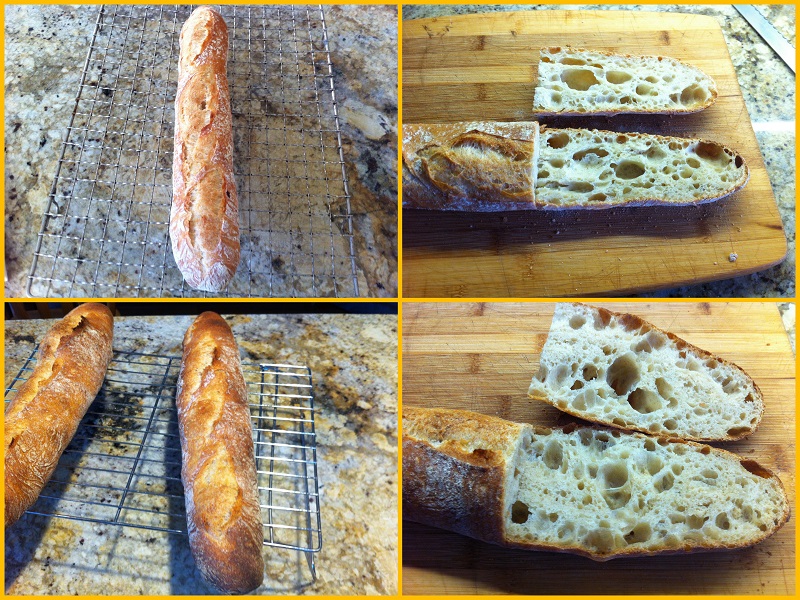 The crumb result was basically the same but neither of these loaves or the ones from the previous bake (top 2 photos) had the right look to them, which I chalked up to not having developed the dough enough during mixing and through bulk fermentation. I'd been doing just light stretch and folds in the bowl during bulk fermentation thinking it would be enough but clearly a better workup was what the dough needed.

For this latest bake (pictured in the photos below) the dough was kneaded on the counter till smooth and slightly springy before going into a 75 minute bulk fermentation with 2 full stretch & folds on the counter at 30 & 60 minutes. This made things a little easier for molding, and allowing me to get a slightly tighter skin on the shaped dough making for cleaner slashes than on the previous loaves. 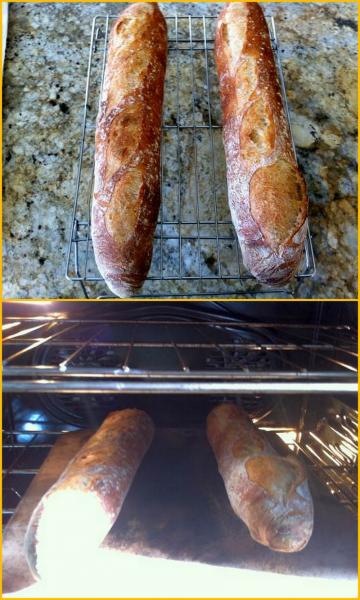 The crumb turned out nicely, creamy, soft, and porous, and it tastes great. Lots of the toasty, nutty wheat flavour that people crave in a baguette, and highlighted by the small percentage of whole spelt included in the mix. The crust has good colour, splinters when sliced and crackles loudly when eaten. I can't ask for more than that. 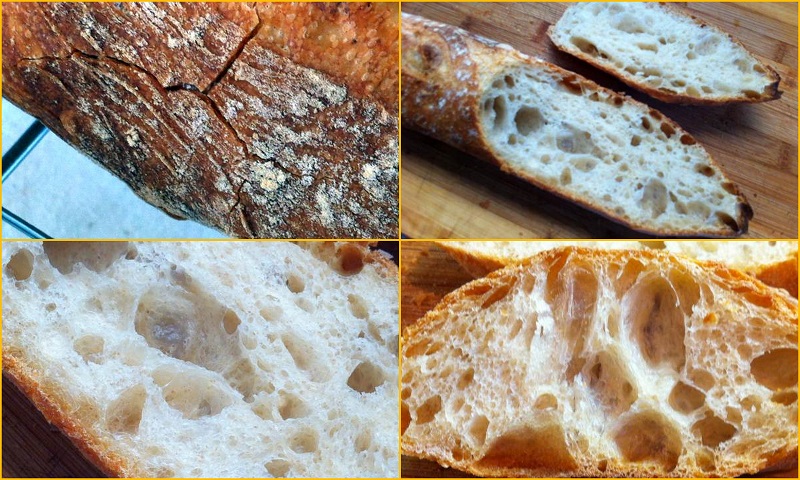 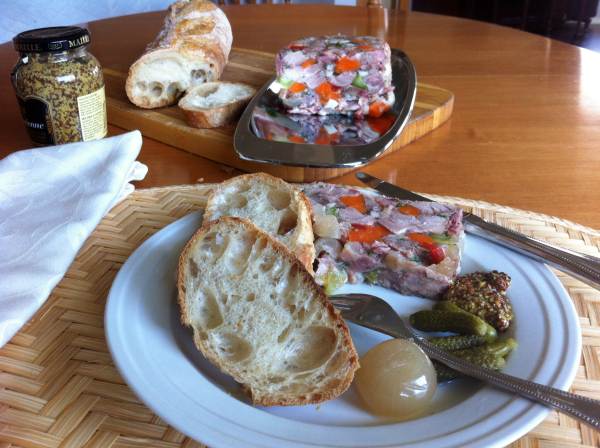 Recipe for the terrine from Raymond Blanc's recipe site

This project is now at the point I can say I'd be happy to serve this loaf to my family and friends, but know that when it comes to bread making these projects are seldom ever finished for me. I'd like to try gradually increasing the level of preferment over a series of bakes to see if I can find the sweet spot, assuming it exists, that will yield a slightly more porous crumb than the one above and with enough dough strength left for proper molding. For the immediate future though I'm planning on making something completely different. As enjoyable and interesting as this project has been, I desperately need to get back to eating bread that has something more substantial to it than flour, water, salt and air.

Below is copy of the formula that was used, as well as a link to a scalable version of it, and one more link to a detailed description of the procedure for making the baguettes.

Link to scalable version of the formula HERE

Link to procedure for Baguettes with Poolish and 6% Spelt HERE

Hi Franko,
You've done a great job working with your strong spring wheat flour, getting really beautiful results with your baguettes...
and the terrine looks just as finely crafted!
What lovely bread to bake and share - I'm sure family and friends support your efforts wholeheartedly!
:^) breadsong

We have a family dinner planned for this Sunday in celebration of our daughter's 25th birthday so I'll have a chance to try it out on my favourite test subjects and see what they think. They are very supportive and look forward to trying the breads I make for them but so far the pates and terrines are a hard sell. The maple black pepper bacon is another story however.They like that stuff so much I put a slab in each of their stockings at Christmas. :^)

Nice, Franko! The outcome speaks for itself, well done.

Increasing % of poolish.. hmm, never occured to me.

I, too, seldom bake baguettes for the same reason, aside of course from the fact that it hasn't much nurtitional value to speak of. Having said that, i still love good a baguette.

I guess I'm flaunting tradition by going so high with the poolish but in the limited production time I'd set for myself this approach fit my needs.

Baguettes are one of the breads that seem to get on my list and never off.   I like your approach.    Your meal looks delicious and your baguettes came out so nicely.   I appreciate the fact that you got this result without resorting to super high hydration and it also looks like you adapted length to a home oven.   -Varda

One of the deciding factors to begin this project was that our new oven is deep enough to fit the entire length of my baking stone in...and be able to close the door. Sounds like a small thing I know but I was never very good at loading long pieces of dough onto the stone sideways and keeping them straight. As for the hydration, I may be wrong but I don't think this dough would benefit much beyond the point where it is now, and it's fairly easy to handle at this level as well. No doubt that baguettes will be in the beta category of my list for some time. Great to hear from you Varda and thanks so much for all your compliments.

Especially since your baguettes are the result of carefully considered adjustments that have incrementally moved you in this direction.  Much more satisfying, I suspect, than simply hitting a home run on the first try and then never knowing how or why it happened.

Incremental pretty much describes it all right! Easily the most difficult bread to get a handle on I've encountered since making the 100% durum Altamura a couple of years ago. But you're right, it is much more rewarding than a slam dunk. Failure can be a harsh but very effective instructor at times, and this was certainly one of them for me. Thanks for your kind comments Paul, much appreciated!

want to have a good baguette, even if only now and again, And your example is one I would want when the mood strikes - with about 20% more whole grains - but then it wouldn't really be a classic baguette would it?  Crust and crumb are just right.  Some cheese, a sliced pear or apple, some pate or your fine example of ham hock and trotter terrine, with a nice red wine, is tough to beat on such as nice day as today!

I had an idea you'd appreciate the terrine and hope you try it out for yourself some time. I wasn't able to get the trotters without placing an order and waiting 4 days so I used a meaty smoked ham bone I'd saved in the freezer for just such an occasion. It added a great flavour and lots of gelatin to the stock, the stock being the most crucial component of the terrine's final flavour IMO. As far as these baguettes being a classic version all I'll say is that they are my work-around or version of one. I doubt they'd pass muster in Paris... and fortunately they'll never have to. ;^) Many thanks for your comments dabrownman, always a pleasure to hear from you!

Franco what a great post and tribute to your baking expertise.  I applaud your excellent results in making such a successful looking and tasting baguette.  I would love to try your formula with a SD starter and see if you can achieve the same results.

Thank you! I'm fairly sure it'd work using natural yeast, I just wanted something that could be done on short notice, which is often how I find out we're having people over for dinner.

All the best Ian,

I feel much the same about Baguettes, Franko,

Maybe one day I'll wind up doing some work in a bakery which produces lots of baguettes, then i can improve without feeling like it';s one of those things I ought to do...there are so many other breads I want to make for my own pleasure first.

Your baguettes do look great; some lovely crumbshots going on here

It's been at least 12 years since we stopped making our own baguettes at the in-store bakery where I work and even then they were a straight mix and machine molded so my experience with the real thing has been quite limited I'm sorry to say.

I did a whack of Hot Cross buns this morning myself, and it's just getting started. The week before Easter Sunday we produce ridiculous amounts of those things, so many I'm afraid I've lost my taste for them.

Thanks for your kind comments on the loaves Andy!