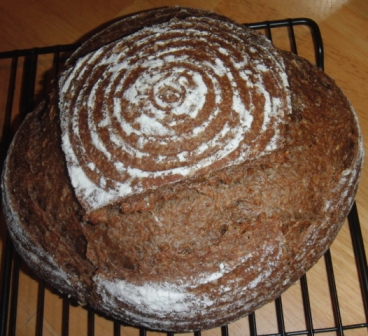 This is so far my favorite of all the pumpernickels I have made. While I am now aware that there is another kind of pumpernickel bread that I have yet to bake, this my version of the kind of bread that I liked to have for my sandwiches growing up. I called it American pumpernickel in hopes of mollifying any pumpernickel purists. It's not quite as dark as I imagine I could get it with caramel color, but I can't quite bring myself to do that, even though I've added food coloring to plenty of deserts before. So I used two of the other often suggested options, cocoa powder and coffee. The coffee really seems to go well with the rye and fennel seeds which I also added. I used brewed coffee because I figured the rule about only cooking with wine you'd drink ought to apply to coffee. Or... there was enough coffee left over in the pot the next morning.

Ingredients350 g all-purpose flour150 g pumpernickel rye350 g coffee (brewed)1 T cocoa powder1 T fennel seeds100 g stiff levain (~50% hydration)10 g salt
As for method, I doubt I would do it the same way the next time, but this time it started out in my bread machine on the dough cycle, because lately I've been using it to knead the dough for my daughter's weekly sandwich loaf. So, I put everything into my bread machine but the salt(because I forgot about it). Once I remembered I paused the machine for about 20 min., added the salt and restarted it. I also paused it and did some S&F every 30-45 minutes through the machine's cycle, because I was afraid I was going to end up with glop instead of dough. When the dough cycle was done I let the dough proof in my oven with the light on at around 85 F for about 90 min to bring the total time from the start of mixing up to about 3 hours.
Then I took it out of the pan, preshaped as a boule and let it rest for 15 min. and then did a final shape and let it rise in a floured brotform for about 3 hours before slashing and baking on a stone with a bowl on top. I preheated the oven to 450 F or so and dropped the temperature to 400 F once the bread was in the oven. I left the bowl on for 20 min and then baked for an additional 20 after removing the bowl. This is about when I realized it was a lot harder to judge crust browning when it's already so brown at the start of the bake, so I decided to take it out after 40-45 min total. 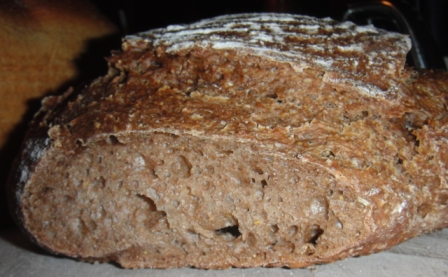 it come out beautiful and what a combination! delicious ...

Thanks- you made my day! I've been likewise admiring your breads made with wine.

Nothing like your baking method and DO's to put spring and crust on bread.  Yours has to taste great.  The open crumb is pretty stunning too.

Usually bread is pretty easy to name since it has flour in it that was milled from some kind of grain.  Wheat, emmer, einkorn, spelt, rye, Kamut, durum etc....  But pumpernickel is different.  There is no pumpernickel grain , or even pumperdime berries you can cut in half, so pumpernickel bread becomes more murky and mysterious.

I'm certainly no bread purist but to me your bread more resembles something like  a Jewish Deli Rye on the order of Eric's Favorite Rye , or any rye that has 30% whole rye and the rest some kind of other white or nearly so flour in it.  It is about as close as an American Sandwich Rye as you'll get and probably close to the one you grew up with and remember so fondly.

It is pretty far from most pumpernickel's that usually, but not always, have a higher % of whole rye, have rye chops and meal, whole rye scalds / soakers and baked at low temperatures for 6-20 hours or so.  But I just baked what I called a pumpernickel that had 50% rye and 50% spelt, had coffee and cocoa and that too .......isn't quite kosher for pumpernickel purists either :-)

For me, your example is just a fine bread by any name!

Thanks so much! Pumpernickel also being the label that gets applied to a coarse grind of rye flour. There's something appealing about the fact that there's a whole separate nomenclature for rye- chops, berries, pumpernickel. I bought the flour I used for this loaf intending to use it to make a new starter, but I couldn't stop myself from baking with it first. And I agree, this loaf resembles more of a deli rye than it does the original pumpernickel, although then you get into the question of whether true Deli Rye requires clear flour or not. I wish I could pick up some of that stuff at a decent price so I could try it out. I love KAF to pieces, but can't bring myself to buy flour in 3 lb bags very often.

As for the name, I've done some homebrewing here and there so I thought I might co-opt some of their naming methods- the stuff that US breweries are calling an IPA sure isn't what was taking the slow boat to India back in the day. So it gets dubbed American IPA and gets its own set of criteria for what fits the "style." But perhaps it's more like wine and either it is Champagne or it ain't?

can be decently replicated by combining 1/4 C of whole wheat and 1 C of AP.  That's pretty much what first clear flour is.  Great for bagels too if combined with bread flour.

Good to see another home brewer become a baker too.  Seems to be fairly common around TFL though more so with the men.  IPA uses top fermenting yeast since it can withstand the heat in India and the trip back to England.   Commercial bread yeast was derived from a top fermenting variety of yeast used to make ales.  Here in Phoenix, it is too hot most of the time to make lagers so ales rule and we can replicate the heat and voyage back to England, if that is the taste you want, to get a real IPA not problem.  Lagers are way more difficult here.

One thing you can try out is to make a hops starter for bread and then use that to make beer too.  Very tasty both ways.  Barley Malt is a staple in both.  Another thing I do is use the diastatic malt I make for bread as an additive for making high alcohol Eastern European Porters.  The two  hobbies go well together and so does their products!

Nice looking bread.  Great crust and crumb.  I know DA above commented about a pumpernickel baking for 6-20 hours but I think that is only one style.  He is right about usually having a higher percentage of whole rye and dark rye flours in the mix but in any case your bread came out great and tastes great so feel free to call it "good bread"!

This is such a perfectly executed bread. I am always in awe of bakers whose aesthetics match the taste, something which I don't think I will ever master. So I keep myself content admiring such good looking breads!