Inspired by a recent thread, I decided to tackle creation of a copycat recipe for Joe's Squared pizza from Baltimore. Anyone want to try it out?

Update 1/26/2012: when I first developed this formula and made this over the last 2 days, it started with a very liquid starter (~170% hydration), then to a loose sponge (~114% hydration), to a firm final dough (~59% hydration). It was also created for double the quantity, to ensure that the sourdough build would be successful. I've now updated it based on what I've read and learned about Joe Squared's pizza, as documented later in this tread: generally lower hydration, original bulk ferment, and more fridge time.

Mixing and Kneading:
Knead for 1-2 min at lowest speed, just until it starts to come together as a ball
Now add oil
Knead for 5 min at medium speed (Kitchen Aid speed #4)
If you're going to use same-day, start preheating oven now to 550F with your pizza stone, sheet steel, or cast iron griddle. You'll need to preheat for at least 1 hour.

Bulk rise:
Let bulk dough rise 2 hours at warm room temp (75F). You can probably go longer if desired; however, you do not want your dough to more than double.

Shaping:
At this point, shape into balls, grease lightly with oil, and refrigerate for future use; OR divide into desired pieces (200g is probably the right size for small individual servings).

Generously flour your rolling surface, and roll out to 1/8-1/4" thick using a rolling pin. If dough is too elastic and springs back, let it rest for 10 min, and try again.

Place pizza dough on cornmeal (on pizza peel or parchment)
For true "cube" square style, use a pizza wheel or a sharp knife to cut a 10 or 11" square.
Top pizza as desired, putting ingredients right up to the edge in true copycat style.

Bake at 550F for 3-7 minutes, until bottom crust is browned and toppings are melted as desired.

Please let me know if/ when you make this recipe Cranbo...I think you are quite inventive and I would love to see a photo..

best to you..
Belle

but will have to cut your recipe in half for the two of us.  59% is awfully low hydration but the oil should make it workable.  After watching the video I think you are close.

Thanks for the feedback. I'm not sure what else to do about the quantities. I suppose you can build Stage 1 as-is, then halve (or quarter) the Stage 2 and Stage 3 quantities, but you'll have some Stage 1 starter "waste" to re-use elsewhere. Fortunately Stage 1 yields a fairly small amount (I'm guessing about 1 cup or less), so the waste should be minimal.

Any other suggestions are much appreciated.

stage one in half too along with the other two stages.  15 g of of my stiff starter plus half the flour and water should be perfect for the other two stages if they too are cut in half.  That should give us 2 decent sized pizza's bigger twice as big as personal ot 3 smaller ones if my daughter is home from college.

I think you pretty much nailed it but I will probably add a little more water in stage 3 to get it to at least 63%.  Anything in the 50's is too close to bagels.   My bagel recipe is 58% percent :-)

Good point, I'm sure 15g would work. I'm always a little wary of SD builds that use less than 20g of starter, perhaps I'm being irrational :) I suppose if you use starter is healthy and active, then it shouldn't matter. On the other hand, if you've used a starter that's been sitting unfed in your fridge for a month, then probably neither 15g nor 30g will make a difference, and the end result won't be as good. It always comes down to the quality of you ingredients, doesn't it? :)

Stage 1 has been built (I'm using 1/2 quantity throughout), although the 170% looks a little watery compared to the video, I think it probably should be closer to 100% hydration, I'm guessing 100-125% is probably more accurate. Still I'm moving ahead with the 170%

Cranbo..you are a real risk taker..if you can clone this recipe I will be forever indepted to you... 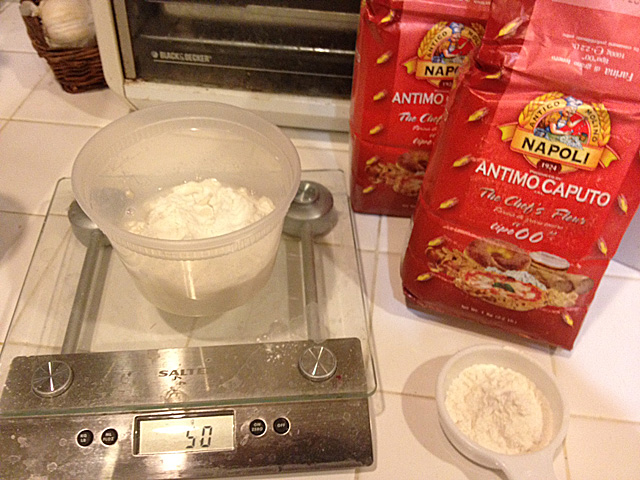 Here's what it looked like before, right after initial mix. You can see, pretty watery, I think probably more watery than it needed to be. That's why I would amend the recipe and shoot for around 100% hydration (perhaps slightly higher?), which is more like what the video appears to be. 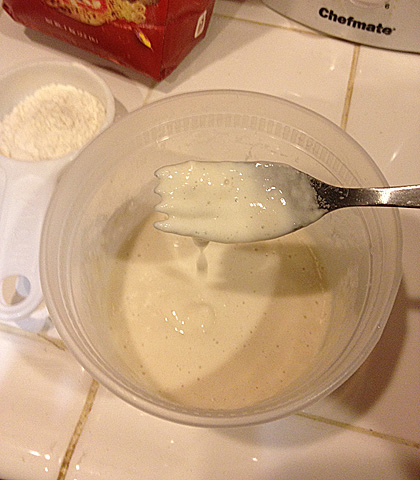 Stage 1 sat overnight for 16.75hrs at about 73F. I think it may have been too long; it smelled fine, but it did separate somewhat, with  a flour layer, liquid layer, and then flour layer. Like I said, I think this is too watery compared to the video.

Moved onward, mixed stage 2, and let it sit for 2.5 hrs. Don't have a photo of this, but it was just barely bubbly, a few scattered bubbles here and there. In 2.5 hrs, there was no visible expansion or growth, just a few bubbles here and there. Definitely not quite as bubbly looking as in the video. When poured out in prep for Stage 3, it definitely felt like it had some body, not chunky, but not quite watery either. It was clear some fermentation has started to happen. Still, I keep thinking that Stage 1 is probably 100% hydration or so. We know that Stage 2 is 100% hydration as well (that's made clear on the video); however, next time I would just wait longer until it looked sufficiently bubbly, which might have taken another 1-3 hours.

Into the mixing bowl went the Stage 2 sponge, then the small amount of water, salt, and then the flour. Boy that Caputo is finely group, feels almost like baby powder between your fingers, just such a silky flour texture unlike any of the bread flours I typically use regularly, like KA.

I set my KA to knead for 2 min at the lowest speed, just until all dry and wet ingredients were incorporated, then in went the oil. Then went for 5 minutes at speed #4 (medium), checking at 2 minutes and 4 minutes. At 4 minutes you could tell it was starting to smooth out, all sides of the bowl were now clear. At 5 min I stopped, and as you can see it was a moderate level of gluten development. Not quite windowpane, but certainly fairly extensible. 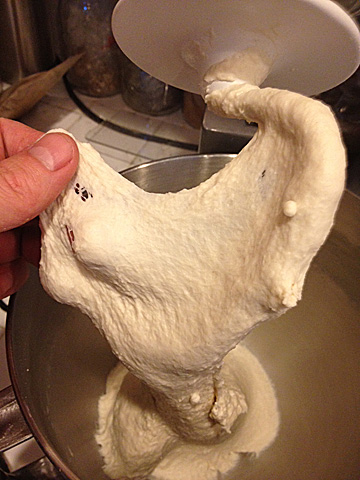 Was tacky at this point, not sticky at all. Dough temperature after kneading was 75.5F.

Formed easily into a reasonably tight ball without any additional flour. 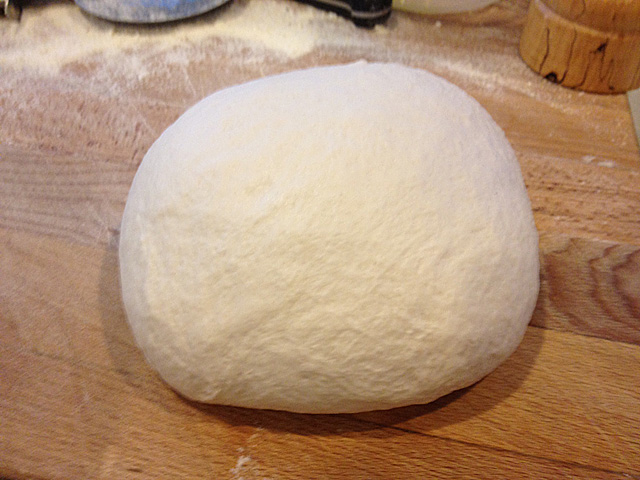 I set it in an oiled plastic container, inside my microwave with 1c. of boiling water, for a warm rise (probably 85F with 75%+ humidity), which according the video should be about 2 hours, but I'm skeptical that will be sufficient time to ferment. Still, I've set the timer for 2 hours, and we'll see what happens, and how it looks at that point.

I checked at 2 hours, and it wasn't doubled. At 3 hours (pictured below) looks like it doubled: 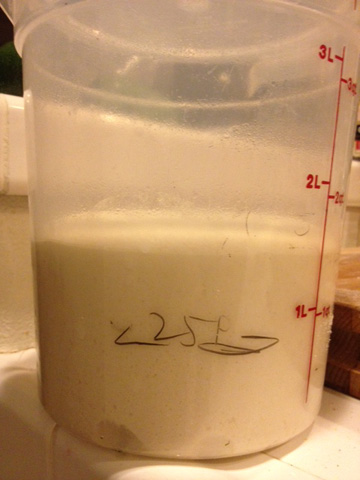 I cut off a 200g piece, folded the rest and put the rest in the fridge. With a little flour on each side it stretched very readily, very extensible and not very elastic. I'm used to round shaped, but I went for a long rectangle this time, in the spirit of Joe Squared, and in keeping with the "cubed" theme. 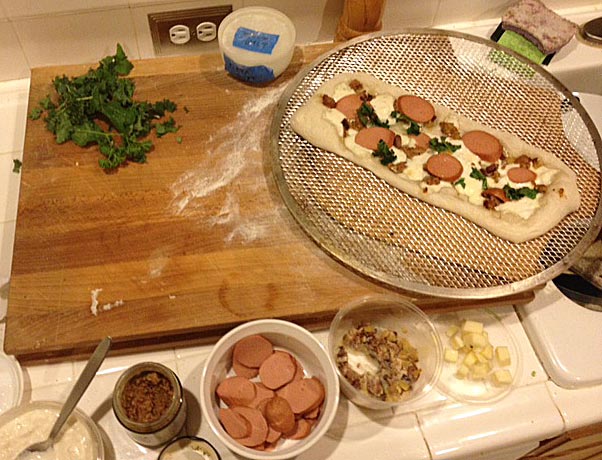 Toppings? Cream sauce base, some dabs of whole-grain mustard, 2 kinds of German sausage, gold potato/bacon/onion confit, some greens, and a little olive oil over the whole thing. 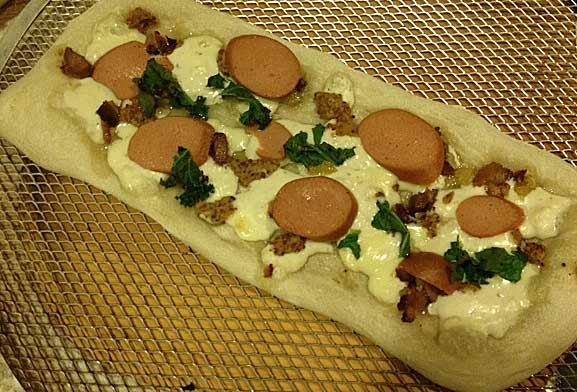 Baked at 550F for 3 minutes on the pizza screen (I like to par-bake this way), then loaded on some greens (kale/parsley/arugula) and a little more cheese, then back in for 3-4 minutes directly on sheet steel. Results? 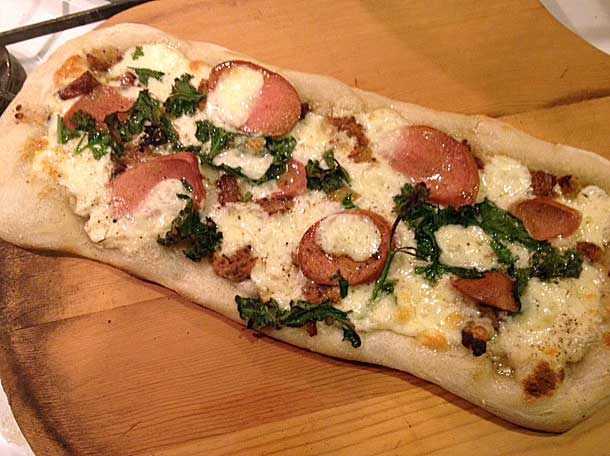 Delicious! The Caputo really forms a paper-thin layer of "crunch" where the pizza base meets the 1/4" sheet steel, which gets a nice little char on it. I thought browning the Caputo would be a lot worse, but the baking steel did an admirable job. 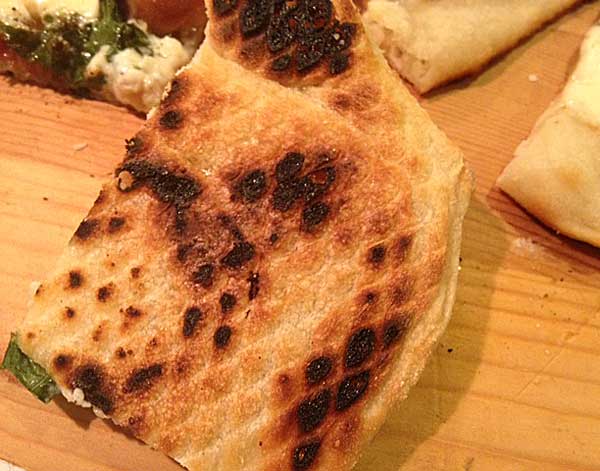 The cornicione didn't brown much, which is why perhaps a longer, slower final ferment would be good if you want a really brown edge. Joe Squared doesn't have much cornicione (toppings right to the very edge), so shouldn't matter much. That said, you can see the cornicione did puff up fairly well. 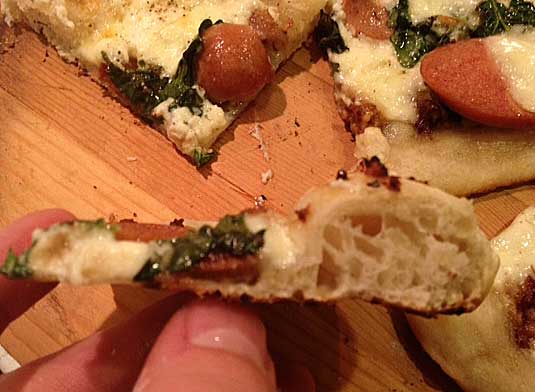 Overall? Pretty good base, very mild flavor. Using Caputo flour is nice, and I like the change of pace from what I usually do. I can't say that the flavor of the crust got really deep, as much as the 1-2-3-style pizza base that I did recently...24 hours in the fridge works great things for depth of flavor for crust. I'd consider trying it again. The toppings were great, German wursts and deli mustard are a good combo, and I liked green bitterness of the greens.

So I was digging around and I came across an interview with Joe Edwardson from Joe Squared on PizzaBlogger.com with a bunch of revealing information.

PB: Do you favor a cold rise or a warm rise for your dough?

Joe Edwardsen: We do a mix of both actually. We begin with the [sourdough] starter, which we build up the night before. Then we throw the starter into the dough mixer [with some additional flour and water] and made a biga. Then we take the biga and put it in the cooler and let it slow rise overnight. In the morning we let it warm up for 30 to 45 minutes. Then we add it to the remainder of the dough ingredients, get one rise out of that and then scrape the dough into pans. Then we put [the pans] into the walk in and pull it out for pizza making as we need it. (In an e-mail I sent to Joe for futher details, he confirmed that after the biga is incorporated into the remainder of the dough bill, the final bulk rise takes place at room temperature before the dough is scraped into pans and put in the walk in. Joe mentioned that depending on the strength of the biga and the temperature and humidity on any given day, this final rise can take anywhere from 15 minutes to 2 hours).

Just as I suspected, Stage 3's rise is followed by some cooler time and use of the dough as needed.

Not a surprise that this kind of stuff was skipped in the "made for TV" version with Guy Fieri...people just want to see how "on point" and "real deal" the end result is, and those kinds of details are only interesting for bread nerds.

A final note: it will be hard (if not impossible) to fully adapt this dough exactly to a home oven. If you read the full interview with Joe, you get a much better idea of how he's had to tune his recipe and baking style in to the use of a coal oven, which has required him to use a wetter dough. That said, there's plenty of great pizza recipes out there...I suggest heading over to pizzamaking.com to learn from the truly pizza-obsessed.

At least it's satisfying to know that the above dough works and tastes good...especially without ever having tasted Joe Squared's pizza, which I will certainly try next time I'm in Baltimore.