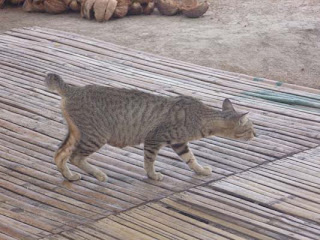 The locals are descendants of Sulawesi fishermen (Bugis) mixed in with the 'local' Sasak from nearby Lombok.

There are no cars, no police and no dogs on Gili Trawangang, and all (!) cats have funny tails.

The art of snorkeling is practiced here by simply sticking your head under any water you can find.

Donkeys rule the streets by local ordinance, no motorized vehicles are allowed on land.

I spent my time at Blu d'Amare. A wonderful  small resort with trattoria, right on the beach, run by an Italian couple. Moreno, the man about the house, takes out his boat early in the morning to go fishing. The same tuna he wrestles out of the water bare handed, is in the carpaccio on your plate that same afternoon.

On top of that they bake their own bread, which was the reason I decided to book with them in the first place! To thank the lady of the manor Sandra, her hubby Moreno and their staff, I have been busy coming up with a sweet breakfast roll in their honor. I made my version of 'Roti Maros' from Sulawesi - basically an enriched sweet jam-filled bun - and replaced the durian filling with soursop jelly. The 'durian belanda' (=soursop) is considered to be a for whimps by the locals, so if you want to be brave, use the real thing :-) But don't say I didn't warn you when you do! It also works well with any other jam or fruit in season.

A Dutch person is called a 'Belanda' in Indonesia. It literally means "Holland". But just like with the word 'Bakra' in Surinam, another former Dutch colony,  it has a teasingly derogatory connotation when used by the locals.

That probably explains why there is a fruit named after the Dutch in Indonesia. The 'Durian Belanda', also known to the rest of the world as soursop is a fruit that more or less tastes and looks like the Durian, but doesn't come with that one thing this 'king of fruits' is known for and probably cursed over by many a Dutch colonizer when the time of the year would come around that the (up to 3 kg!) ripe durians would fall to the ground... 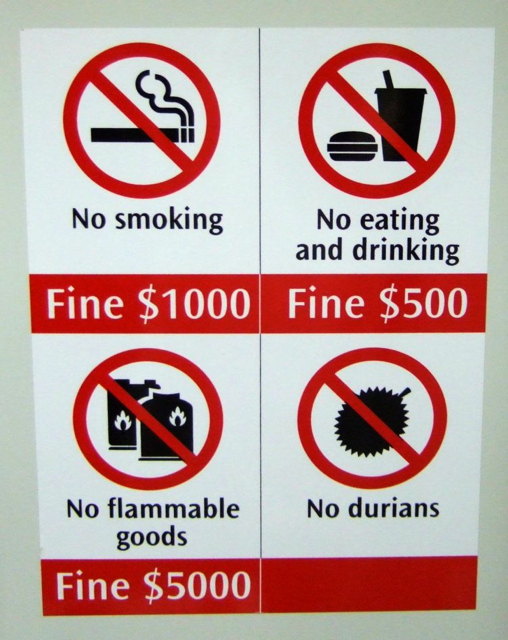 In the middle of the night a man travels from Makassar all the way to Tana Toraja, Sulawesi. After about half an hour on the road, the bus comes to a screeching halt. The driver shuts off the engine, and, turning on his chair, faces his passengers with the same blank stare he has been using to negotiate the treacherous moonlit Indonesian roads.

Without discussion the passengers start drawing their wallets. Some throw it at the driver. He picks them out of the air like low hanging fruit. A few walk to the front, fork out some rupiahs, and go back to their seats without muttering as much as a word.

The driver squints in the dark and scans the bus. The man has instinctively reached for his wallet by now, albeit with an overtly puzzled look on his face. By the time he gets it out, the driver has slammed the door of the bus shut on his way out, leaving the man startled. Is this a stick up? Or just more government officials to be paid for services never rendered?

Daniel from Makale, who has been fast asleep with his mouth wide open at the window seat next to the man, wakes up. "Ah, Maros?" he mutters, with sleepy disappointment. He tugs on his make shift pillow, closes his eyes, opens his mouth and dozes off again.

The man watches the sleeping Daniel as if to find some sort of proof in the features of this young man's face that he has been making this journey many times before. Then he carefully leans over to try and see what is going on outside.

The door hisses open. The driver is back and carries a stack of white boxes. He is throwing the same blank stare around. He squints at the man leaning over Daniel.

The sweet smell of freshly baked bread rolls through the bus. Wafts of warm sweet dough, butter, caramelized sugar together with something... undefined. By the look on the man's face it is beyond disturbing. The slow smell with a pungent punch makes the man's nose curl up, adding horror to the bewilderment already present in his eyes.

Just about when that nasty, remotely fruity overtone of odor curls itself around the pleasant smell of freshly baked bread and starts choking it to death, Daniel from Makale wakes up with a jolt.

"Roti Maros!" he shouts into the man's armpit.

He aptly wriggles his way out of the chair before the man even gets a chance to get out of his way  and starts pleading with the driver. Passengers come to the front to collect their white boxes. Daniel gets off the bus, pointing his finger at the driver, not to go anywhere without him.

By now, the evil stench, clearly emanating from the white boxes being passed around, has squeezed the life out of any association with freshly baked goods. Instead the entire bus smells of almonds, turpentine, rotten onion and size 15 gym socks after Polish Jesus' protégé Klecko and his treadmill are done with them, all at the same time. 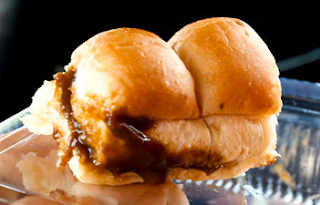 He opens the box. There are ten soft sweet white buns in there. Neatly stacked in two rows of five. A snug fit. Daniel from Makale takes out two buns, shreds them apart and offers one to the man.

The man has managed to take control of his curling nose by now. No one in the bus seems phased by the horrid smell but him. Instead, big grins have appeared on all sleepy travelers' faces, and there is animated chatter as every one digs into their 'Roti Maros'. The man takes the offer. 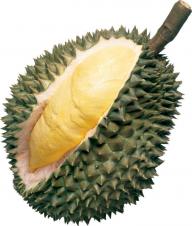 "Apa yang bau?" The man asks Daniel. What is that smell?

Daniel from Makale laughs. He takes a big bite from his roll. A brown glob of jam oozes out.

for the soursop jelly

Put the dry ingredients in the bowl of a mixer; the flour, the yeast, the salt and the sugar. Mix well. Slightly beat the two eggs and add them to the flour, together with the lukewarm milk and the soft butter. Mix on low speed until the dough is well developed and passes the window pane test, about 9 to 12 minutes.

Oil a container and put in the dough. Cover the container tightly with cling film and let the dough rise at room temperature until it is just about doubled in bulk (±1½ hours).

To make the soursop jelly; heat up one can of soursop juice (about 370 ml) and add 425 gram of jam sugar to it. Bring to a boil, let it simmer for a few minutes, and then take the jelly of the heat. Give it a good stir and let it cool until it sets.

If jam-sugar isn't available, use normal sugar and add the appropriate amount of pectin. If you are lucky enough to have access to fresh soursop fruits, you might find this link to make your own soursop nectar useful!

When the dough has doubled, turn it out on a lightly floured work surface. Divide the dough in pieces of about 80 grams and then shape them into balls. Cover and leave them to rest for about 10 minutes.

Make a deep dimple in the ball using your thumb.Put a moderate blob of soursop jelly in the middle and carefully wrap the dough around it, making sure to close the rolls properly, so as little as possible jelly oozes out during baking.

Cover and proof the rolls seam side down on a baking tray until they are puffy and ready for the oven, for about 20 minutes to half an hour.

Bake the rolls for about 20-25 minutes until golden brown on top, making sure to rotate the trays halfway through the bake to ensure even browning.

Dilute a little water into 3 TBS of powdered sugar and brush the tops of the rolls twice right after they come out of the oven. Dunk them in maple sugar and leave them on a rack to cool. 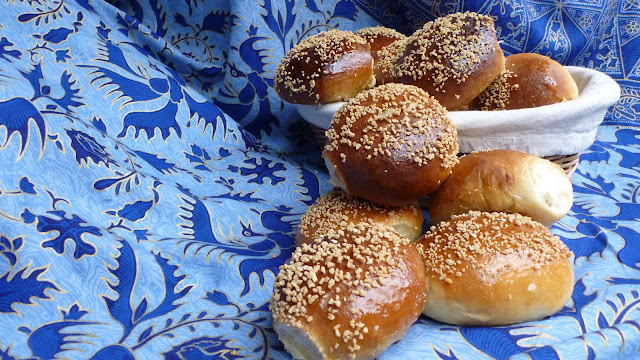 Did my duty and ate that stuff once.  Once only.  Never could get past the smell.

And the funny tailed cats.  Takes me back to my times in Malaysia ...

Sounds like a lovely vacation.  And those are lovely rolls.

hey Pat! They are veil, aren't they :-) Let me assure you the soursop does NOT stink like that!

I've been wondering about the cat's tails. Is it all down to one cat being introduced way back when, spreading his "faultu tail genes" all over Asia? I thought it was weird!

be an interesting thing to research.  "How the cats got their tails." Like the "Hemingway" cats that all have extra toes...

A bakery in Indonesia - now there's a good retirement business...

Thanks sooo much for your latest post.  I love all you have written so entertainingly here.  I have learned much from your posts in the past couple of years and this one is no exception.

I have emailed this one to a friend whose mother was from Indonesia and her father from Holland....perfect match :-)

I think she will love what you have written, in fact I can imagine her smile while I write this out to you.

Oh, love the videos too and will bake a batch of the rolls for my friend.  Probably will be filled with strawberry jam though....  A bread I can give  that her mother might have eaten as a child growing up in Indonesia.

Thanks so much for putting this all together so delightfully :-)

I'm not sure the mother will have eaten a lot of bread in her childhood though; the 'Roti Maros' is "new" and gaining popularity as we speak, and more and more Indonesians are turning to bread. Great to see a lot of bakeries spring up. That is something I had never seen before in Indonesia.

For a short moment I considered starting a bakery on Gili Trawangang; there isn't one there, and there are a lot of tourists and places catering to tourists who would really appreciate a good baker on the island... It would be so nice! But alas, one week after arriving back home, every day affairs have pushed it all to the back of my mind, I guess the way it is supposed to be with 'holiday dreams' :-)

Thanks again for your sweet words!

Sounds like a seed has been planted.  One never knows what the future will bring.

Have you been following Codruta's posts here?  She is currently working on opening a bakery in her home town!!!

I think the best description of the smell of Durian was "regurgitated onions."  We lived for a few years on the south coast of Java near enough to Durian plantations that the whole fishing villiage knew when it was ripe.  We enjoyed it fresh as well.  Interesting...  in bread?  Curious...  served as a filling?  You bring back all kinds of memories, Freerk.  So you didn't like it?  I have seen it frozen in the Asia market.

I have witnessed that it is a fruit that one either likes or dislikes with no opinions in between.