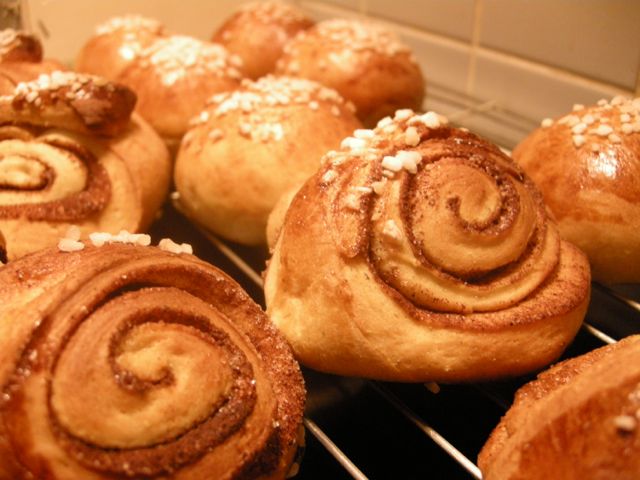 My grandfather often tells the story of how during the war, when Helsinki was being bombed, his mother had to leave the pulla dough as the family fled to the nearby bomb shelter. After many hours, when they came back home, there was a surprise waiting for them: pulla dough all over the place -- apparently it had raised rather well!

Pulla, or Nisu as it's known in the United States (in old Finnish, nisu was the word for wheat, nowadays we call it vehnä) is the most common sweet bread in Finland and very popular with coffee -- so popular that it's also known as "kahvileipä", coffee bread.

In this recipe, which I wrote about a year ago, I have tried to combine some of the things I have learned about bread with the best of Finnish pulla. 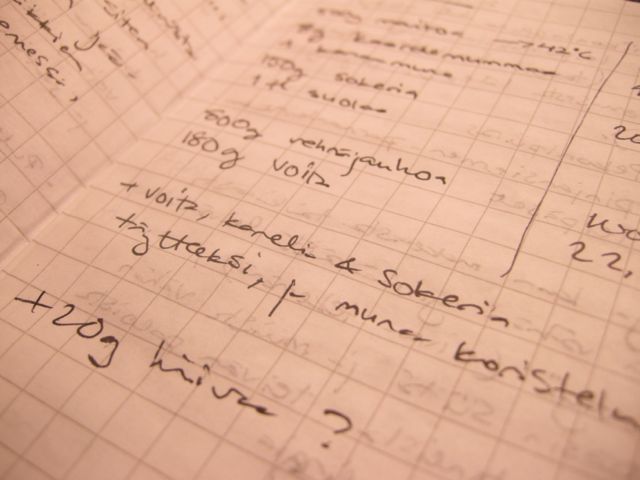 Most pulla recipes tell you to start from the milk and then slowly add flour until the dough feels right. Because of this, the recipes are not that exact. I go the opposite way and start from flour. I also use less yeast and allow the dough to rest a bit longer. Other than that, this is very traditional pulla. 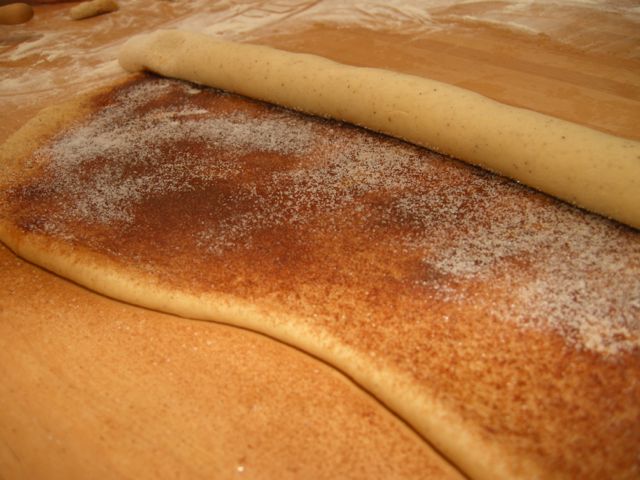 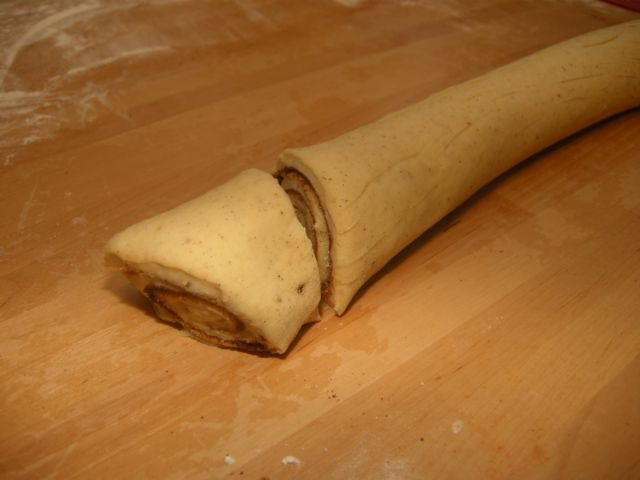 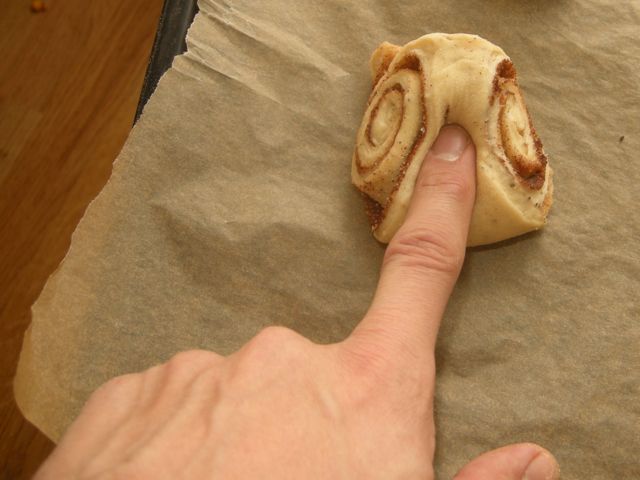 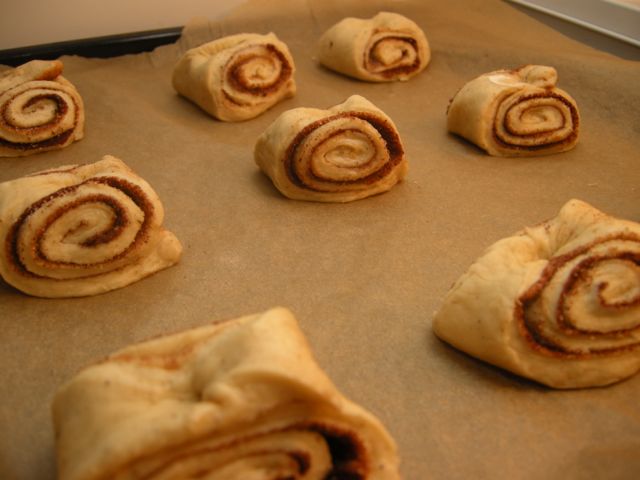 Fresh pulla is best enjoyed with a glass of cold milk. 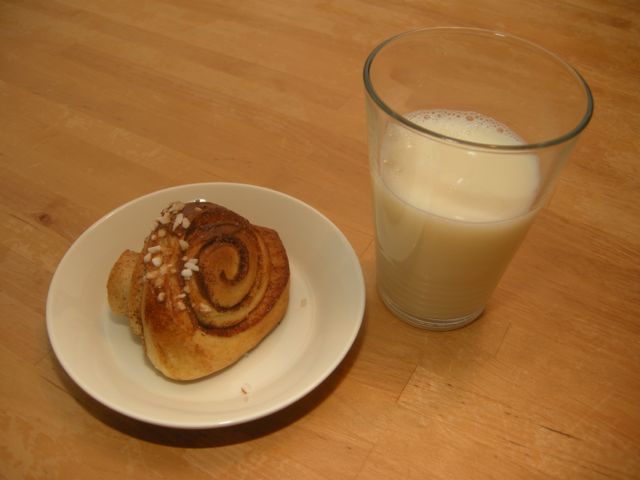 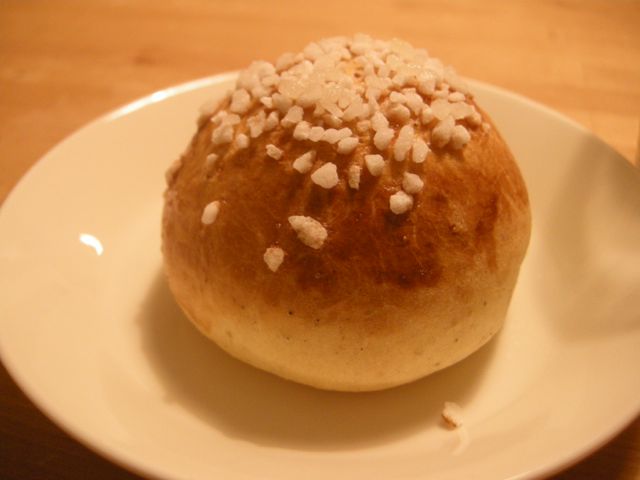 And finally, here's my four-year-old's work of art. It has a lot of added sugar and butter! 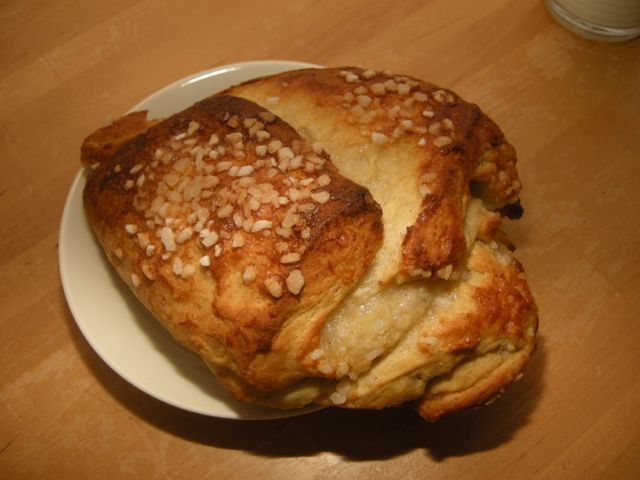 Those look delicious! I love that you let your four year old make one :)

I would like to try this recipe, may I ask if you have any idea how much cardamom is 8g?  I usually measure spices in teaspoons, as my scale isn't accurate for small amounts like that.  I'm guessing perhaps 2 teaspoons, based on the fact that salt is usually around 5.7g per teaspoon and instant yeast, 3.2 g per teaspoon.

Also, just wanting to confirm that the 150g of sugar is the amount spread in the filling, not mixed into the dough, is that right?

Ah, good that you asked!

The 150 g of sugar goes into the dough. In addition to this, I spread the sugar for the filling without measuring it... Quite generously as I love cinnamon and sugar ;)

And cardamom... In Finland, they sell cardamom in small 8 g containers. This gives you a picture of how important pulla is over here. According to the recipe on the side of the flour bag, it's one tablespoon.

Edit: I also edited the recipe to include the additional butter, cinnamon and sugar needed for "korvapuusti"

Thanks for the details!

Well a glass of cold milk? Okay, but we Markkanen's still go with a strong cup of coffee with our pulla! Regards, Brian

Wow, those look fabulous!  Now I don't have to decide whether to make pulla or cinnamon rolls!I'm eager to try this recipe.

I need to tweak the timing so my kids can braid the dough when they get home.  At what point do you think I'd really start to risk over-proofing in the "rest until doubled" stage?  How would you recommend slowing that step down by a few hours?

It would be helpful to see the cardamom package and the spice itself. In the US, usually ground cardamom is used. I know "cardamom" can also mean whole pods, seeds and perhaps home-ground seeds, depending on where you are in the world.

Lovely pulla! I will have to try my hand.

. . . referenced your grandfather's recipe and as I have also just posted on our beloved pulla compared my grandmother's recipe to yours. At first blush 8 grams of cardamom is a lot more than I use. I only use 6 large pods, shells discarded, seeds crushed and infused in scalded milk. I will try using a little more cardamom next bake.

It also looks like you are using a lot more butter and that cannot be a bad thing so I will also up the butter next bake and see what happens. I am more than happy with my current sweet levain pulla, but it never hurts to try new things.