A couple of days ago, I posted here about my failed attempt to make a 100% rye bread. I had followed a recipe by Hadjiandreou, and experienced some problems: I had a gummy crumb and flying crust. I received many helpful comments from the users of this community. The "post-mortem" of the bread suggested that the reason for my problems was excessive enzyme activity. There could be various causes for this (e.g. bad flour quality, insufficient acidification, etc.).

I had checked that my sourdough is acidic enough, and at one bake I actually added extra vinegar, so I was pretty sure acidification wasn't the problem. The flour is stone ground, and I have no way of checking its quality other than baking. (I have 3 kilos of it at home, so I hoped its quality was adequate). One other cause for increased enzyme activity is letting the dough proof at a high temperature for a long time. The recipe calls for mixing the dough with boiling water, which obviously raises the dough temperature considerably.

I decided to try making 100% rye bread again. I used the same flour, and the same recipe, but made the following changes:

I took photos of the process and resulting bake. This time I am very happy with the crumb. The dough baked out, there was no flying crust (!), and the flavor was excellent. I still need to improve the baking (I'll mention some things I want to improve next to the photos), but this is a big improvement. Thank you all for your help!I first refreshed my stock sourdough in preparation for making the production sourdough (to borrow a term from Andrew Whitley): 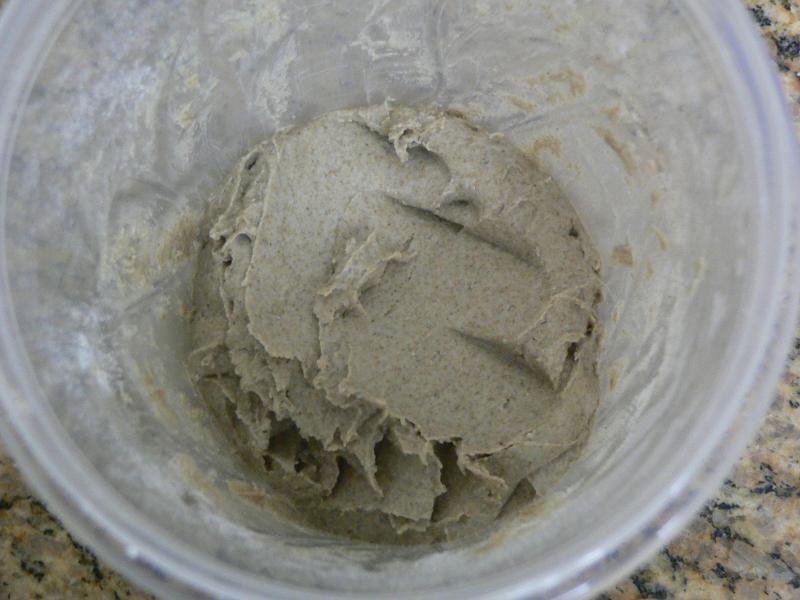 Here is the sourdough after overnight fermentation: 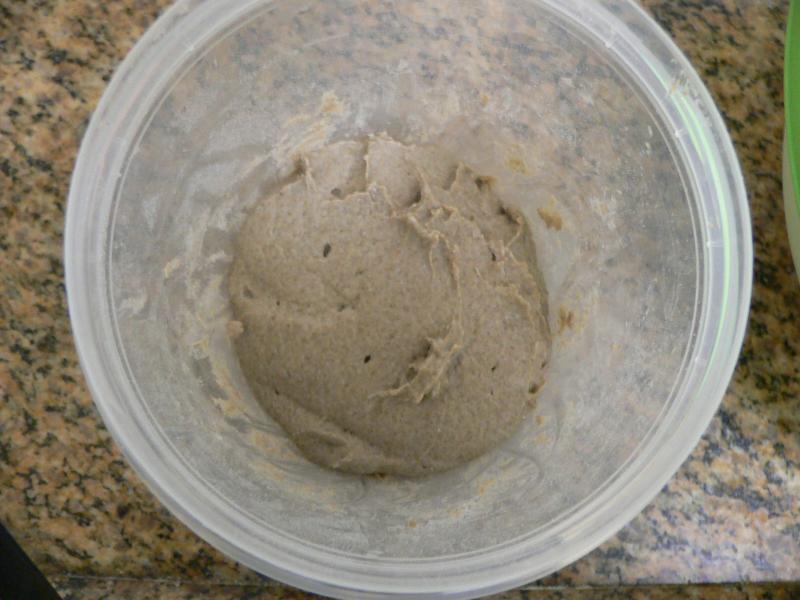 It rose well and smelled nice and fruity. I weighed out the rye flour for the production sourdough: 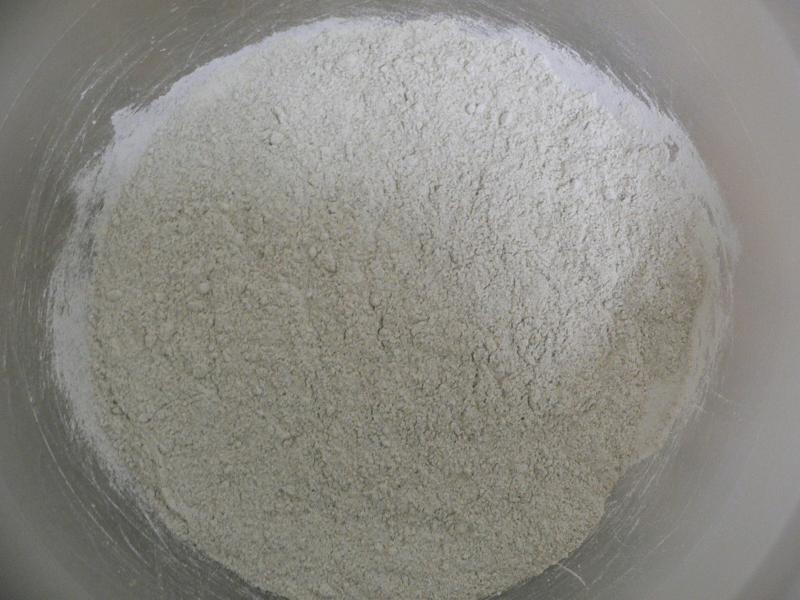 I added the water and starter, and mixing to get a cohesive dough. Here is the just-mixed production sourdough: 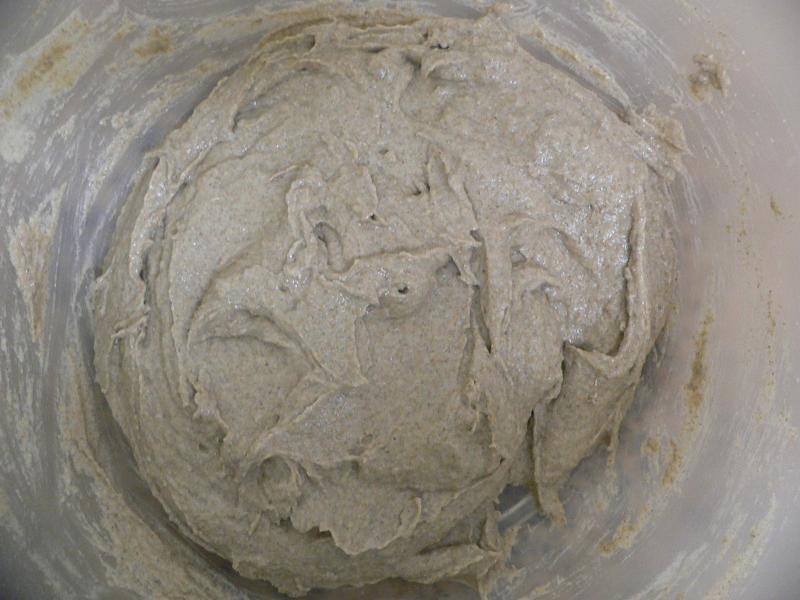 At this point, I went to work. When I got back from work, it has matured and risen nicely: 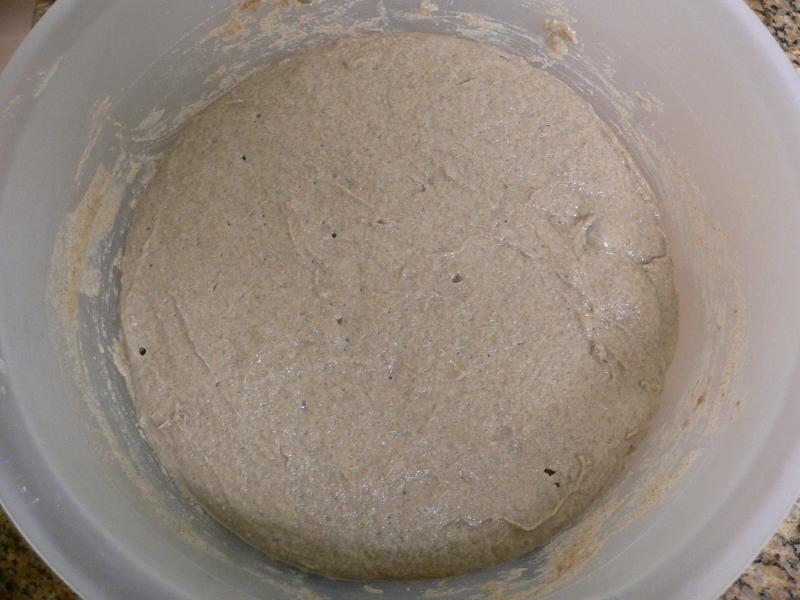 I mixed in the salt, water, and remaining flour. Here is a picture during the mixing: 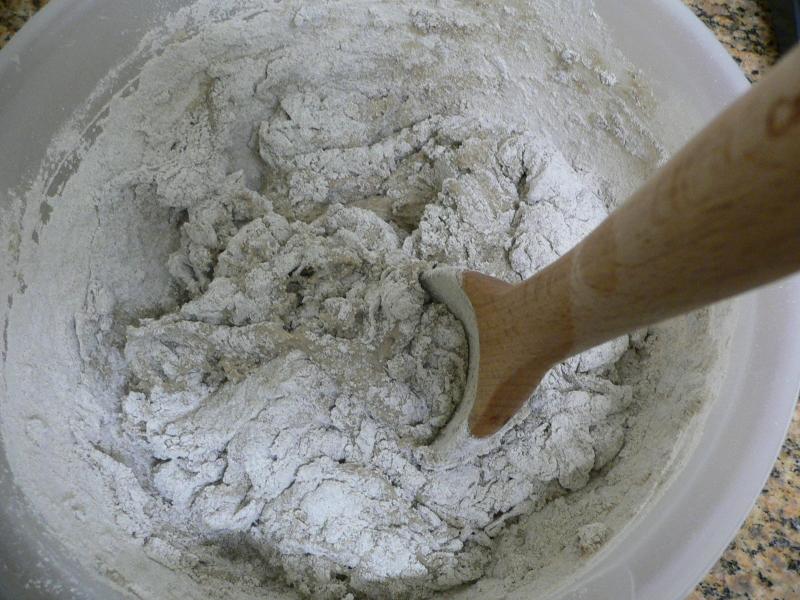 And the mixed dough: 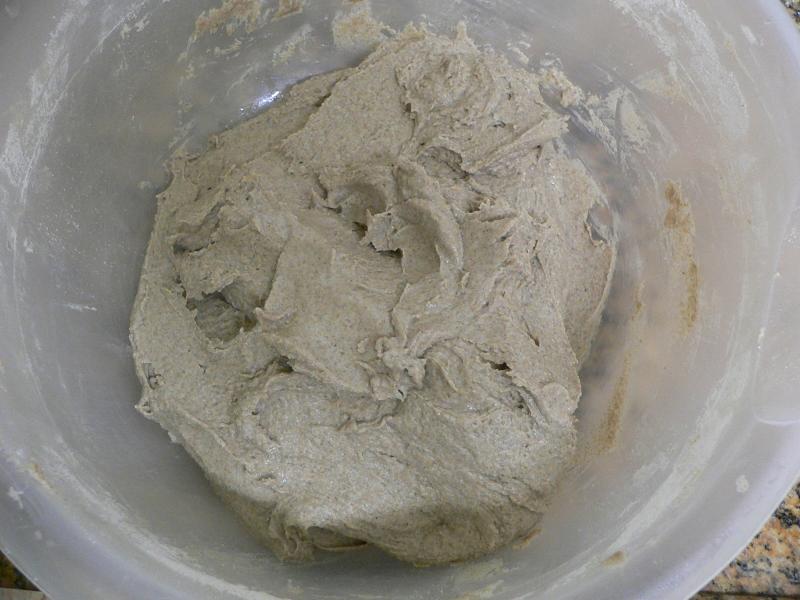 With wet hands, I shaped the clay-like dough into a log and placed it in a pan: 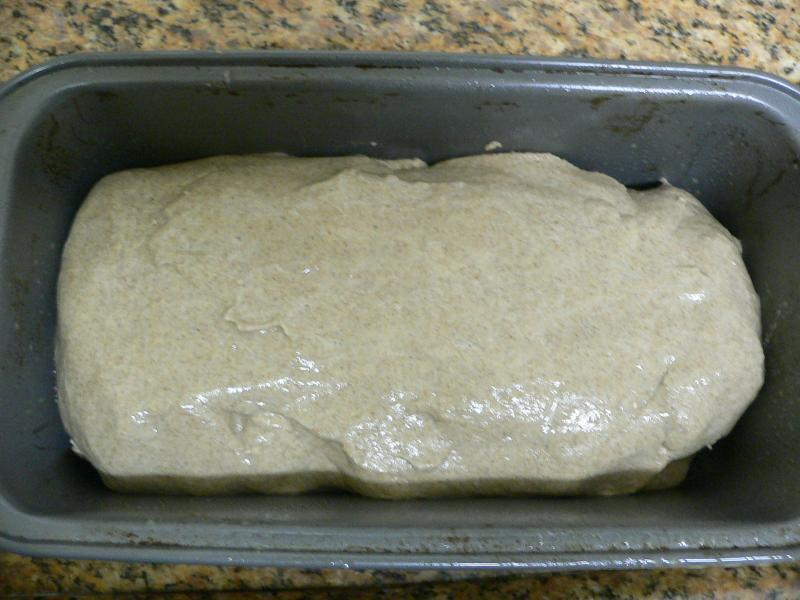 It's not the best shaping job (shaping 100% hydration rye is not an easy task), but it is shaped. I fermented the dough for exactly two hours. It rose slightly but did not seem to do all that much during fermentation. My kitchen temperature was 18C. 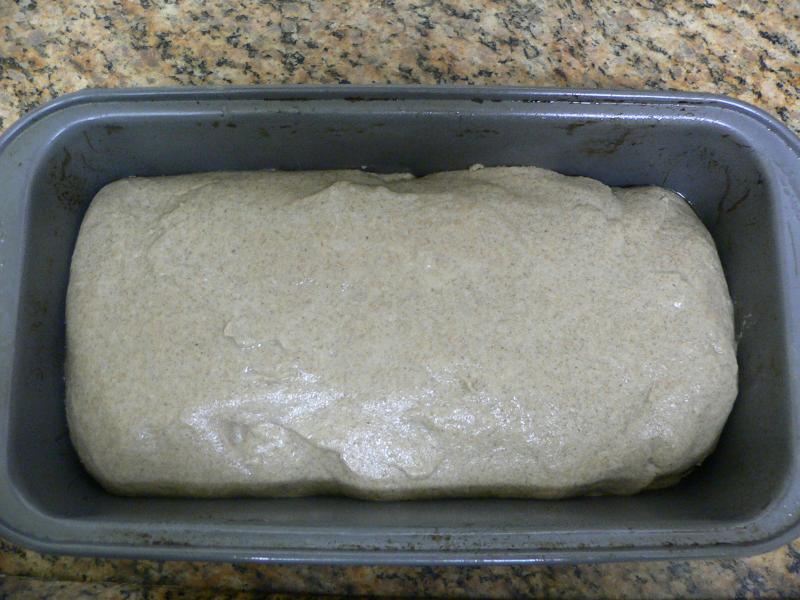 I baked the bread, and this is what greeted me out of the oven. First a top view: 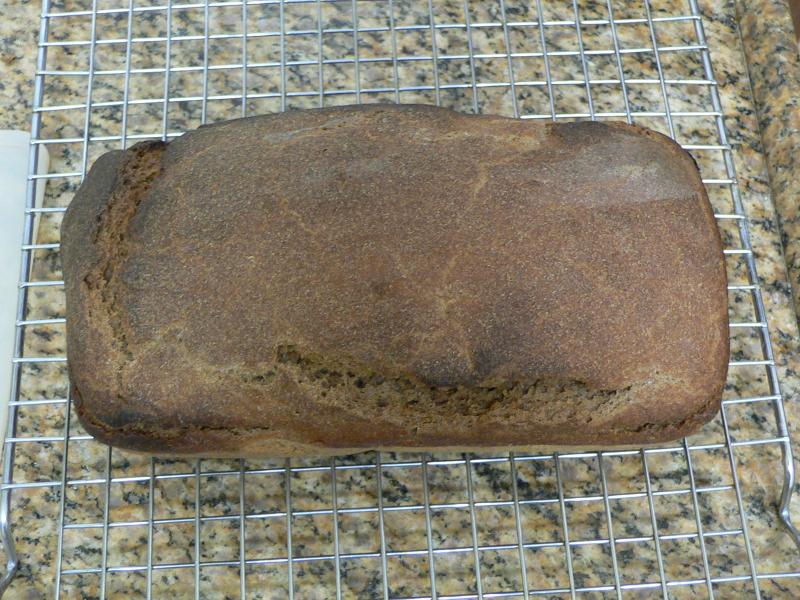 It looks okay, but it is a little too dark in some places, and also there's a large rip down the side (I was hoping for the mottled look). I then took a picture of it from the side: 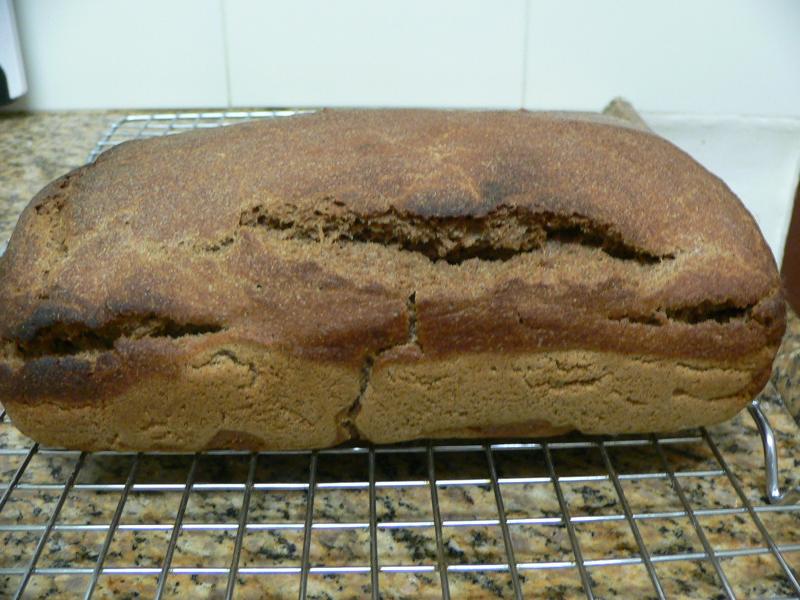 The unattractive rips are quite apparent here. Next time, I think I will try to dock the bread before baking. I also too a picture of the bottom of the loaf: 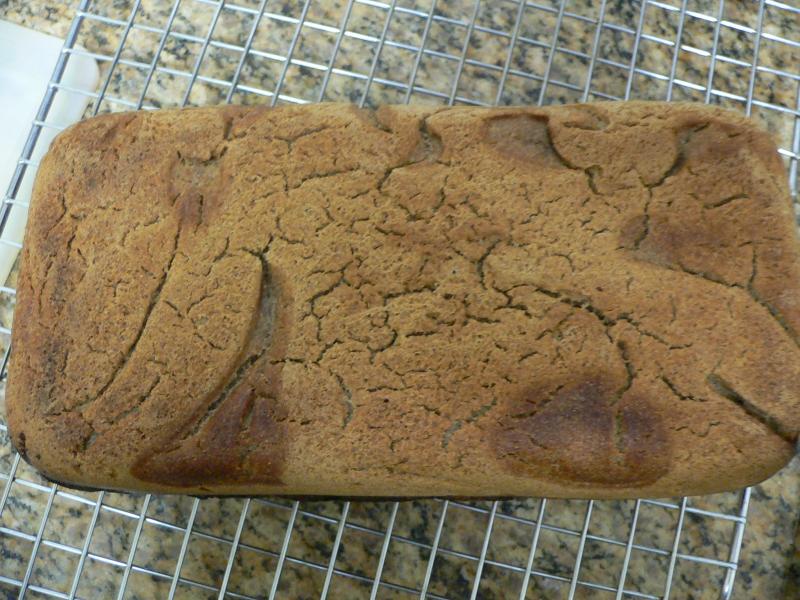 There are a few patches of darker color that I cannot explain. If anyone has an explanation, I'd love to hear it! After an excrutiantingly long wait, I finally cut into the bread. It was a little soft upon touch, which could have been due to a flying crust. I cut into the loaf with dread, fearing another hole. I was pleasantly surprised to find out there was no flying crust, and that the crumb baked nicely: 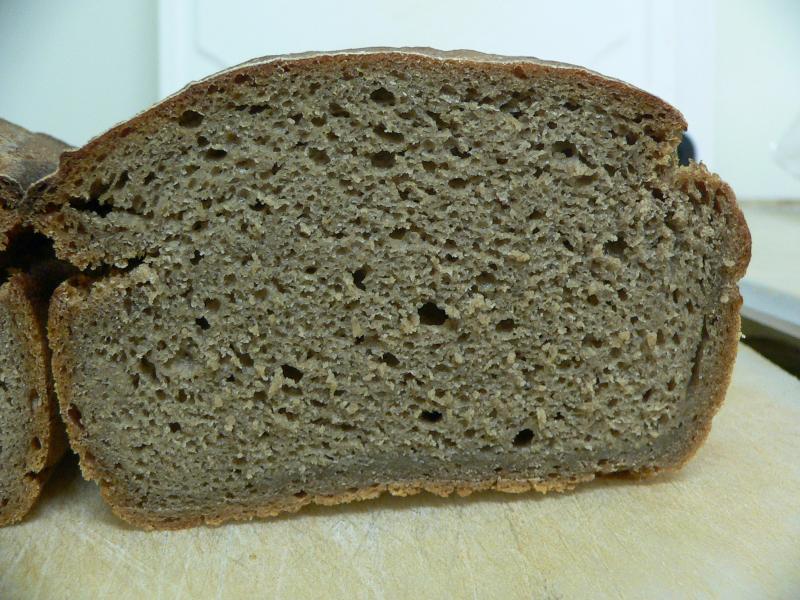 Now if I could only find what happened to the bottom of the loaf (where you can see the gummy strip)...Thank you all, again, for all the help. This is a fabulous bread, well worth making.
Share

well done, this time you obtained a good result. Obviously the hot water compromised the stability of your previous breads. It's a tricky practice. Rarely more than 20% of the flour is pregelatinized with hot water, exactly for that reason.

The burnt spots may have been due to hot spots in the tin?

The cracks are most likely due to the lack of resistence of the rye dough subject to the fermentation.