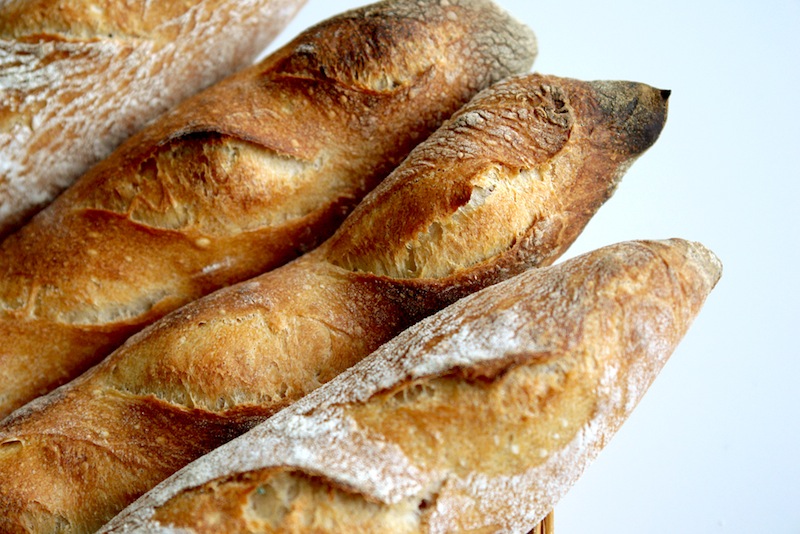 I am very pleased with the taste, though I admit the shape isn't exactly what I wanted. I couldn't shape them as David instructed (being put in front of the dough, I did not knew how to handle it withoud folding it), so I tried to shape them like I saw in Hamelman's video. The result is... well... it is what it is... not a beautiful classic baguette, not a beautiful rustic baguette, but for my first try at this formula, I'm content with the result. I followed David's formula, with one small modification, I put 235g water in the dough for autolyse, and next morning I added the rest of 40g water. I tried at first with 225g and the dough was very stiff.

Thank you, David, your formula makes some tasty baguettes. We (me and my boyfriend) had a chance to taste Gosselin's baguette in Paris in 2010 and we were kind of dissapointed. After tasting my baguettes, and my boyfriend said to me "your baguettes are way much better than Gosselin's.". 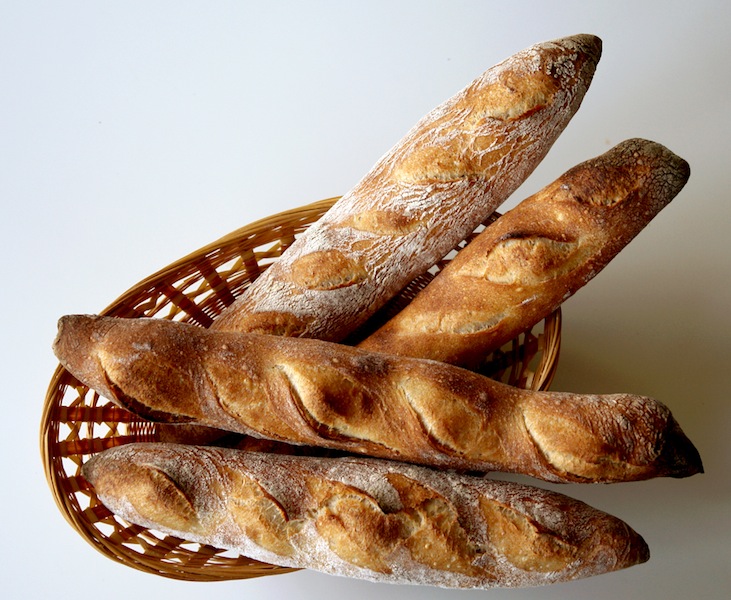 The ones without flour on them went in the oven right after shaping (it did not occur to me in that moment, that if I shaped them, I must let them proof). The floured ones got an hour of proofing. 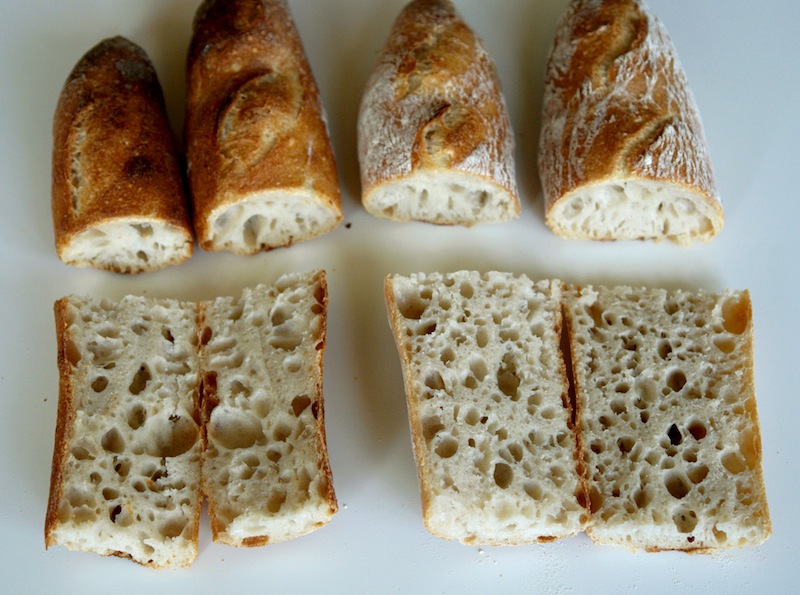 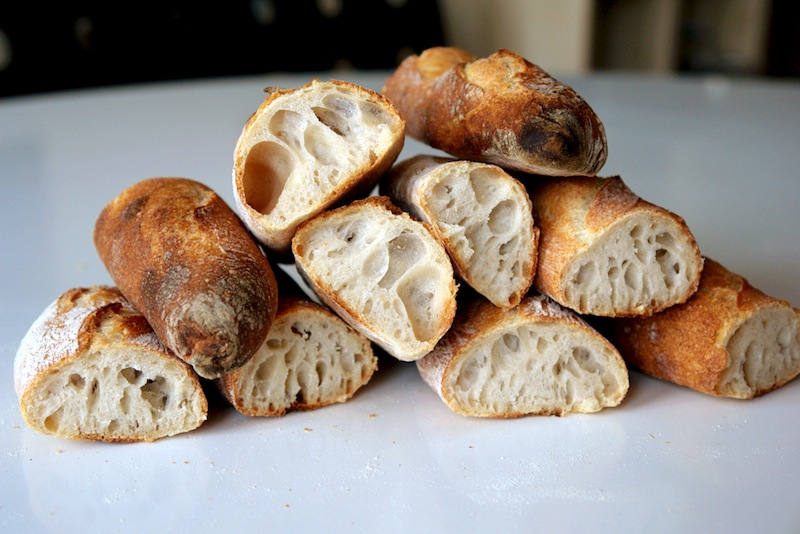 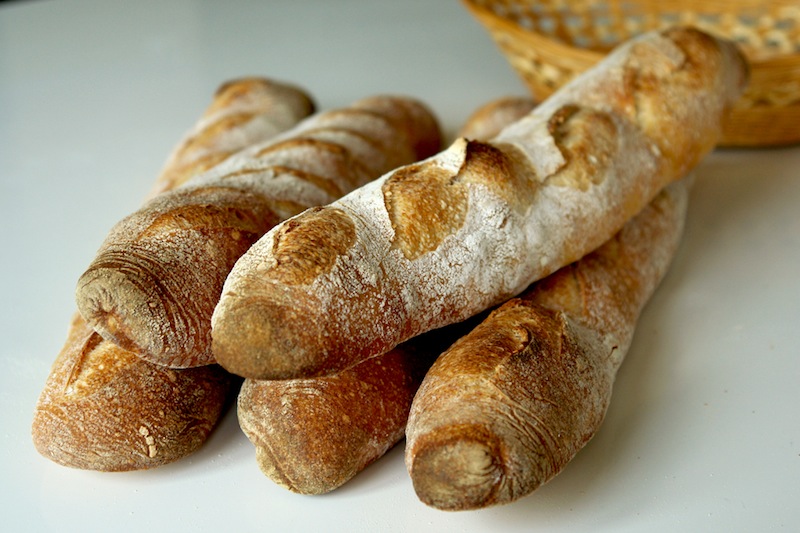 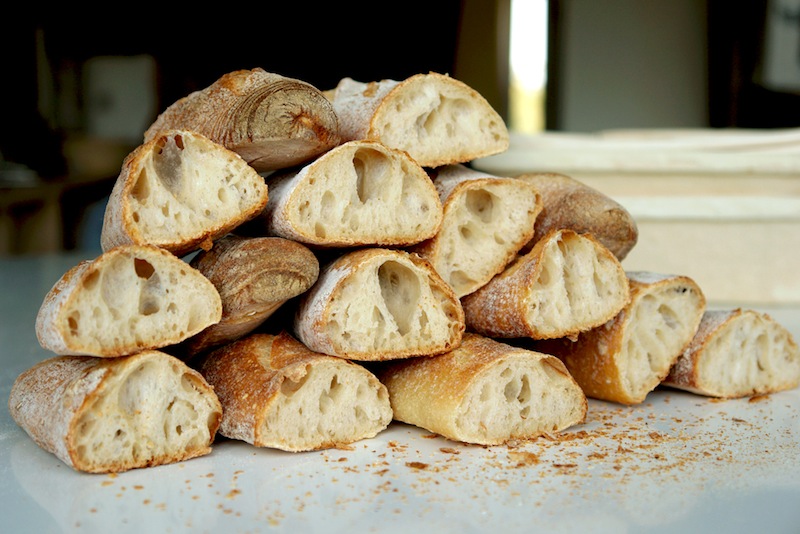 I wrote about tsese baguettes on my romanian blog, link here.

I'd have been very happy if my first attempt of baguettes turned out like yours! It took me a long time until I managed to get grigne like you did on some of them. And your crumb has lovely open texture, too.

Shaping is really good.  Not only Romanian air, I think you've got magic hands, too. Everthing comes out of your hands seems to have  really artistic, beautiful quality.  You must have very good hands and also artistic eyes. (not only bread, but also photography and even that beautiful fabric cover you made for a proofing basket!)

I may be wrong, but just from looking at the photos, I have a feeling you might've overproofed two of them; the one you proofed for an hour before you baked.   I'm saying this because almost all the baguettes in my early days looked very much like yours, and I now know they were over-proofed.  With baguettes,  I find you get better grigne if it's just slightly under-proofed than other types of bread.

well, Lumos, I don't know about my artistic eyes and good hands... but I'm an architect, so I guess artistical skills come with the territory. :)

Your observations about my baguettes are very useful, it never occured to me that I overproofed them. I admit I liked the crumb of the unfloured ones, but I thought that the other ones have a more uniform crumb because of the way I shaped them, not because I proofed them longer. So thank you for pointing this out. For 75% hydration I would have expected a more open crumb, maybe next time I'll lower the hydration and reduce the fermenation time. (but romanian air is very cold these days, 18-20C inside my house, even less during night, and I'm not quite sure how this will affect my future baking...? as yu said in david's latest post... the winter is coming...)

I KNEW you're either in the profession or on the training that needs artistic creativity.   The way you shape your loaves, present them and take pictures of them are in such a different class, it's always a tremendous delight just looking at the photos of your breads.    My mother was a trained architect, too (though she never worked as an architect because she got married soon after she graduated from the university), and she's always loved creating beautiful things wih her hands.

Yeah, in theory higher hydration should create more open crumb with lots of holes, but with baguettes, perhaps because the shaping can be tricky, it's not always the case if you don't be very careful when handling; wet and stickier dough means more difficult dough to handle. So lowering the hydration a bit is a good way to go until you get used to it, as you're planning to do.

And also what I've found with my baguette making is that slightly underproofed dough does produce better grigne, but fully proofed ones make more open crumb with bigger holes.  So it's a matter of balancing between two to produce  baguettes with decent grigne AND very open crumb, which is not too easy.  There're so many things you need to fine-tune in baguette making, and that's probably why it's said to be the most difficult bread to make but also it's so fascinating.

Nothing beats Home-made, right? Wondeful Baguettes inside out, Codruta!

I'm happy you and your boyfriend enjoyed them.

It sounds like your dough was drier than mine. Did you use a strong flour (higher percentage protein)?

@David: Thank you, it's your merit we like these baguettes, your formula is very good. :)

I used a french flour T65. I don't have the package anymore to verify the protein content, but it absorbs a lot of water. I had / used 3 bags and I had the same feeling every time, that it's a thirsty flour.

Ahhh ... T65. The flour I use is probably closer to T55. T65 has more bran left in it which will absorb water. On the other hand, the flavor is probably better.

My dough is quite loose. It is a challenge to score, and the cuts open less evenly than yours did, so the appearence is more "rustic." If you wanted a more rustic appearence using the T65, I would just increase the hydration a bit.

Nice post Codruta. Love the last photo of them stacked. They look delicious. Be careful though, baguettes can be a slippery slope into obsession :)