I'm having a discussion with myself here regarding a formula I found to calculate layers in laminated dough.

L being # of finished layers, F # of folds and N being the # of times the dough is folded.

Seriously lacking in the math department myself it probably is a better idea to ask for help!

I understand the formula, but I'm uncertain as to where the formula starts counting. Here is my point: if I lock in the butter, which I wouldn't "count" as a "fold", I start out with 3 layers anyway, right? So... that will effect the total number of layers by an extra factor of 3... or am I completely nuts.

Or is it just as simple as this: one  sheet of dough with butter locked in= one layer?

Thanks for helping me out

P.S. You would do me a big favor endorsing my BreadLab iniative. Every "like" will get me closer to realizing a 6 episode documentary/road movie; chasing the best bread Europe has to offer. Thanks in advance!

Think of it this way: if you do a lap fold you actually fold the dough two times (1/3 of the dough from the left and the other 1/3 from the right) but you wind up with three layers, thus f=2 and layers=3.

Do it again and you have 9 layers as a result of two additional folds.

You can envision more complicated fold patterns and see that the formula still holds - i.e., a book fold will be three folds and produce four layers ...

Thanks Doc! I understand the formula, but I'm a bit in the dark about the actual layers you end up with, versus the number in the formula. Because: right after locking the butter into the dough, I have, in effect created 3 separate layers (dough, butter, dough) already.

My question is: Does the sheet of dough with the butter worked in count as "one layer"? (as I strongly suspect?)

Hope this clarifies my question

It is more conventional to calculate number of layers of fat rather than dough.

If you use the French method that means just 1 [diamond of fat in the midst of a square of dough, then fold over each corner to end up with a back of an envelope arrangement.

From there, assume folds into 3 ,rather than the book fold.

And thanks for answering the question I was about to ask next (e.g. the difference between "english lock" and the french diamond) :-)

I'm making a list of "all" the different names for the basic "fold into 3". There is actually quite a few. Do you mind if I abuse you for asking if you know  more of them?

-three fold (not too sure about this source though)

I SO want to go for the pâte feuilletée fine with the 729 layers, but let me be a wise man and try and get half of that to work first :-)

First of all, have you seen my post here?

Simple fold and single fold I assume to be the same thing.   I don't use either term, but take them to be the final step in what you list as a half turn.   That is: roll out, fold in 3 and turn through 90 degrees.   Three fold, I take to be the same, again, don't use the term.

I do use half turn, meaning the whole activity: roll out, fold in three, then turn through 90 as stated.   Some use a book fold instead, and reduce the number of turns, as this creates 6 new layers as opposed to 3.

To me the secret is plenty of rest, and working cold.

Regarding your ambition, it is less to do with bravery, and more to do with the end product and the dough you want to create!

For instance a laminated yeasted pastry such as croissant would require laminating fat to be added at between 40 and 50% on flour.   This would require 4 half turns.

However, puff paste requires at least 75% fat on flour [3/4 puff paste] and the formula you refer to, I know as full puff, ie. 100% fat on flour!   These both require 6 half turns.   The more fat, the more turns required.   Additionally, French method of incorporation works better for the highest levels of fat in laminated pastes.

Very much looking forward to meeting up for the UK [maybe I should say EU?] TFL bash.

I'm going to study that post closely in the  coming time. I want to get my laminated dough technique "down" (or "up" rather). Best just to dive into it I guess. I am producing okay croissants, but, so far, it's in getting them better that I only make little progress. But hey, I'll get there with posts like yours!

Reading what you say about butter-flour ratio to amount of half turns needed I suddenly realize that the Julia Child's recipe I mostly end up using, keeps making less and less sense (it didn't do that for some time already). With that butter- flour ratio I'm using (100%), I do indeed need more half turns than the 3 or 4 (don't remember now, but certainly not 6) that are in the recipe. Interesting!

I have a whole array (well...) of formulas lined up for the coming weeks. If you happen to have a shortcut to anything I need to add to that list, I'd be happy to hear!

Thank you for sharing, I hope the whole bread get together will happen! 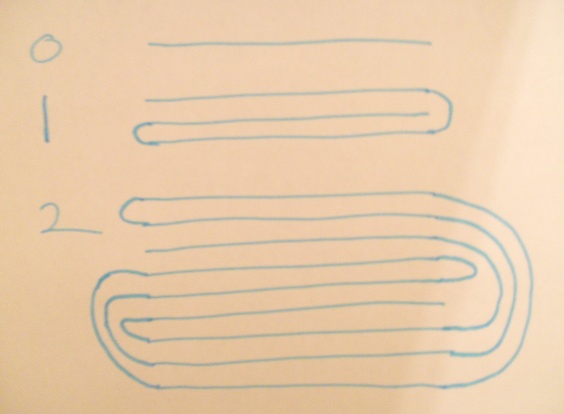 There is a whole branch of maths and physics concerned with mixing of stuff, and this folding technique is one of the easiest examples that exhibit "chaotic" behavior, meaning that the mixing is quite effective. Two bits of dough that were close together at the beginning can be very far apart after a short time (Weather systems, in essence, do something similar).

Google "Baker's Transformation" or "Baker's Map" to find those things.

I love the drawing!

Your explanations about the science behind it all makes me think of the first time I had to stretch a dough by hand very, very thin that needed lard on top. I was puzzled as to when to put it on, because after stretching it would break the wafer thin dough.

I learned, that by putting the lard on a slightly rolled out sheet of dough (at room temp), the lard would actually distribute itself over the dough without any fuss during stretching. And considerably more even than I could have ever achieved by hand.

I'm currently engaged in somewhat of an "empirical" laminated dough study. Trial and error with all the different techniques and formulas floating around. I'd love your math input :-) When my alpha brain fails me, can I ask you for help or clarification?

Thanks for the drawing? Is it yours? Could I use it on my blog?

Have a good week, googling as we speak :-)

I've made croissants only once, they weren't bad, but your post inspired me to think a bit about the lamination process.

What a wonderful stuff well developed dough is: If you have a laminated dough sheet of 30X60 cm

and you would be able to unfold it, you would cover an area of:

About the drawing: It is mine, and you can use it in your blog. Thanks for asking.

I wish I had a garage, I would immediately transform it into a croissant laboratory! :-)

We don't have a garage either, and not enough space in the kitchen to do what you demonstrated!

Anyway, Thanks for inspiring me to revisit croissants.

You are more than welcome Juergen. Great that I can use your drawing.

I am half-turning Hitz's croissants right now and (because of you!)  did it a lot better than ever before. I've been all touchy feely with both chilling dough and butter block to get the consistency of both of them within the same "parameters". And after yet again jealously eying another YouTube-video of that wonderful rolling press machine that would make my quest so much easier, I concluded that although I don't own one, I can ACT like one! And I think that really made the difference. Only rolling in the length, one stroke up, one stroke down, trying to maintain even pressure while doing so.

I have great hopes for this batch. They will come out of the oven tomorrow, at the time where I will be having my first BreadLab interview for Dutch radio. So they better be good!

I'm happy to have rekindled your love of lamination, and hope to see you around, either here or on the BreadLab

Freerk, It's great to hear our conversation had such an effect! I look forward to see the end result.

I made my second ever batch of laminated dough yesterday, when it appeared that the heat element in my oven has blown.

The dough is in the freezer and I am waiting for the spares...

All the best for your radio appearance,

Are there any advantages to folding/rolling of one folding method over the other?   I would think the "N" fold would have more even layers of dough to butter and the "G" fold would continuously stretch the outside layers thinnner than the inside ones leading to uneven thicknesses of dough layers inside a cross section of the dough.  Does it make a big difference?

I would think that if the material has the same temperature and consistency throughout all the layers should be affected in the same way.

It would be different if you used friction or stretching, there you might get surface effects.

Gosh, I never thought of folding it N-wise in threes... Have you ever tried it, and did you notice any difference?

LOL after reading all those formulae and numbers on this thread,even the croissants in shops will never look the same again!

Do I care for them?! I love em! It looks like making candy, but without the hassle of keeping the sugar at the right temp. These belong in the BreadLab without a single doubt!

Community Bake - Baguettes by Alfanso
Starter is very active but dough will simply NOT...
I feel like I'm not getting enough gluten...
Beginner sourdough recipe...HELP!
Issues with getting a loaf right (suspicion:...
END_OF_DOCUMENT_TOKEN_TO_BE_REPLACED