Back to basic - Soft White Sandwich Bread with soy flour

Back to basic - Soft White Sandwich Bread with soy flour 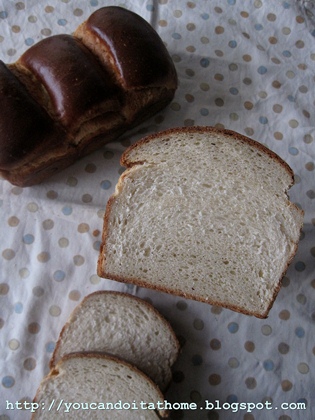 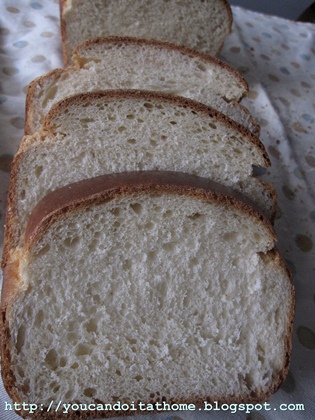 I'm back to basic white bread (well, with a little little tweak). It was the first bread I ever made a little over a year ago, from Peter Reinhart's BBA (my first bread making book). I made this bread again with two motivations, One was that I wanted to experiment with soy flour in bread and it would be better to do it with simple basic recipe. The other was that I wanted to experiment making super soft sandwich bread by implementing intensive kneading as per  txfarmer’s blog on the issue.

PR recipe produced simple and great tasting bread. I still remember that I thought it was the best bread ever when I first had a bite. Not that I'm a good baker, freshly baked bread will taste great, no matter what. And it was even more so, when it was your first you-made bread, fresh out of the oven. It was an absolute joy and gave such a sense of satisfaction.

One year past, same recipe with tweaks of sourdough starter, soy flour (5%) and intensive kneading (to produce soft and tender crumb), this time, the bread tasted even better. So much better, in fact. Soy flour added mild sweet nutty flavour and creamier crumbs. Incorporating sourdough starter in the recipe also gave more flavour to the bread. Intensive kneading also delivered super soft crumb. The bread was so soft, flavoursome, sweet, creamy and has fantastic aroma (the aroma from the baking stayed in my house for whole day, I’m not joking). It was so yummy that I could just eat the bread on itself, without any butter or spread. The bread reminded me of the soft bread from our local bakery, that I had when I was a kid living in Bangkok.

The bread also worked well with the pea and ham soup for our Winter night (it has been really cold in Melbourne, Australia this week. It is the coldest June in years). 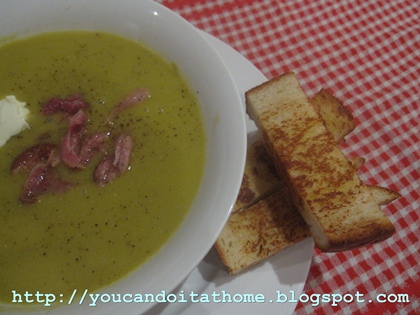 Looks lovely, Sue and nice to see you experimenting with soy flour.  Despite our discussion about it a few weeks back, I still haven't had time to try it, yet.  Maybe this weekend...I don't know...I see other things looming on the horizon again.  I have had no time to bake of late.  But I did do some research and if I can remember correctly now, all soy flours are not equal.  They are toasted to different degrees deactivating the enzyme in the process and giving more of a nutty flavour.  You can get enzyme active, defatted or full fat, enzyme deactivated and lecithinated.  I have to read it all up again as all the information has gotten vague and murky.  Do you have any idea what soy flour you used?  Do you know what its PDI was?  I know that 70PDI, defatted soy flour is the most commonly used.

P.S. Wanted to ask what % of soy you used when I noticed that you had included it.  5% is at the top end (from what I can gather 3% is more common) and that probably explains the very dark colour you have in your crust.  Soy contributes to crust colourisation.  It caramelises nicely when it toasts, too.

The soy flour I used is full fat (as per packaging). It's not commercial one and it's the only option available at the grocer (Asian grocer). The flour is quite moist, thick and creamy.

I also read (and a blog reader also suggested that) about toasting soy flour, to remove some of the moisture, which I plan to do next. I made croissant just today and included about 3% of soy flour. It also gave lovely flavour and slightly improved crust color.

For this bread, soy would have slightly contributed to darker crust as well as the egg wash (I egg washed the bread).

Sue, seeing as it is full fat, it would be wise to keep it in the freezer to prevent it from going rancid (which apparently it can do quite quickly and one of the main reasons for removing the fat from it).  The fat in the flour has a shortening effect on the gluten just the same as butter, oil or any other shortening for that matter.  When using full fat soy flour in a recipe a portion of the fat in the recipe can be left out, thus saving on ingredients.  Just another reason why commercial bakers like to use it.  However, its main contribution is increased volume in the loaf and extended shelf life due to its ability to absorb moisture.

Sue, you certainly had a great windowpane there.

If it has only been a year, since you made your first loaf, then you have made truly great strides in your baking :-)

Thanks to TFL and TFLers (you're also one of those knowledgeble and generous to share). It helped a lot with my learning, not to mention the inspirations.

I am very curious about Syd's comment. I will follow you and Syd's conversation for now. :)  Thank you, Syd!

Syd gave me the link to useful information about soy flour in baking some weeks ago in my soy and linseed loaves post, the link to document is here (I think).

Thank you, Sue!  It is very informative!  I will keep the document in my files.  Thank you Syd and Sue!

You reminded me of the bag of soy flour that i have hidden in my fridge, Sue, thanks! Your description of the aroma, and flavor is so compelling, i'll have to give it a shot one day.. though with some bran added :P