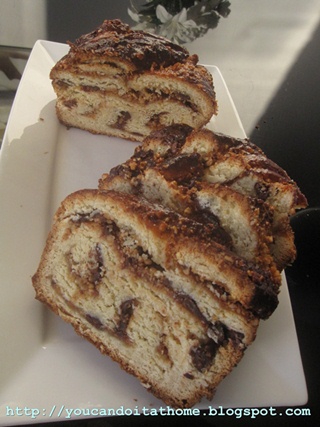 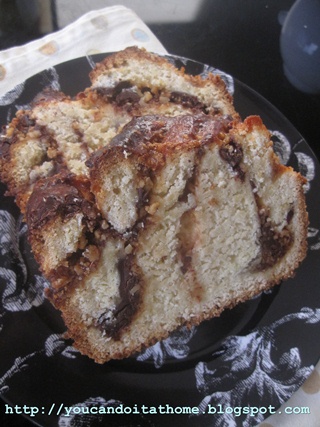 I found this recipe in Dan Lepard’s Exceptional Cake cookbook. Given that it was book about cake, I didn’t expect to see baked goods with yeast in there, especially not for the dish called Krantz Cake.

Apparently (quoting Dan Lepard) yeast cake is a feature of German baking. I was curious to find out how yeast leavened cake would be     different from baking powder or soda.

I expected the cake to have texture of soft bread, like brioche, something soft but still feel like bread. It actually turned out to be quite cakey soft, which I think resulted from the mixture of butter, egg yolks, cream cheese and sour cream in the dough. However, it wasn't as crumbly and fluffy as the typical cake. It still got some chewy texture in it which was rather nice.

The recipe called for walnut, sugar and chocolate for bread filling. I replaced ground walnut and sugar with crushed peanut praline I made some weeks ago. The crushed peanut praline went well with the recipe. It gave caramelised crust and lovly flavour. The cake shape is similar to babka (cut-side-up plaited bread).

Full post, more photos and recipe can be found here.

to gawk at.   I bake sweets very occasionally, but I'll know where to look the next time I get the itch.    Thanks for posting.  -Varda

I don't generally bake lots of cake as well. But I think it must be something to do with Winter, (or I'm getting hooked on sugar and butter), I'm more incline to bake more sweet treat buttery treats for the past weeks.

I haven't tried the cake with yeast yet.  It will be great to try yours.

Thank you for showing us your wonderful yeast cake!

I find yeast cake is quite interesting and I guess it works perfectly with this shape, whereas it will be impossible or a challenge with the baking soda/powder leavened cake.

I love German style yeast cake especially Pear Küchen. I bake a lot of them during fall/winter while our farmer market is full of variety local pears. Right now we are going to have more stone fruits coming out; your post is really inspired me to bake plum or peach Küchen when my weather is a bit cooler. We have heat advisory today. Thank you for the beautiful post.

Pear Kuchen sounds interesting. Pear is in season at the moment. I will have to try that, thanks for the idea:)

How mouth watering your bread looks....Naturally I had to check out your formula.....a dangerous loaf indeed!  No wonder it tastes so good!  I am also a sucker for just about anything Dan Leopard creates.....

I have some cream cheese sitting in the refrigerator that I haven' know what to do with.....I am now eyeing it with a plan in mind....but how to keep people from eating this all in one sitting....

Guess I can't solve all of my problems at once.  Will just have to bake this one up and see what happens!

Indeed, it's very dangerous. Its aroma was also too tempting, tentalising.

I think, you can also easily reduce a bit of cream cheeese, butter and sugar (say about 10 - 20%) and replace them with milk. And it would sitll work as nicely.

I think cream cheese and sour cream adds some nice texture and lovely flavour to this cake that I would love to try it with sweet enriched bread.

Well, I bought some sour cream today and it is sitting next to my cream cheese in the refrigerator....calling to me.....

Thanks for the idea on adjusting ingredients.

I will see if I can hold off on this bake until next week.....

and you forget to mention, peanut, sugar (peanut praline) and chocolate in the filling as well, more shiver and shiver...but hey, this is cake after all, lol....

That looks so decadently good.

Peanut w/ eggs, cream cheese, sour cream...  with chocolate.  I might come up with a term but it might not be family friendly.   :-)

Nice work, and thanks for posting it.

It's real indugence....that can only be consumed every once in a while:)

Hello Sue,
My husband's favorite flavors are in that cake. I see a special treat in his future!
Thanks for sharing!
from breadsong

Always a pleasure to share the bake with TFLers.

The filling would work well with basic sweet bread too, if you're not fancy rich yeast cake:)