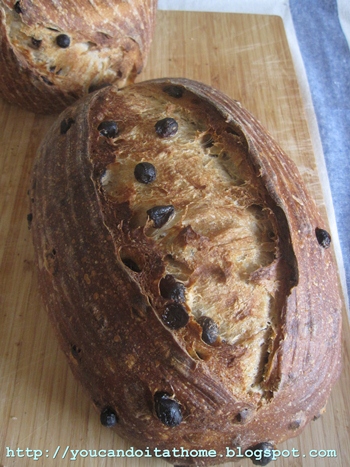 Generally, I don’t make fruit breads often. Not that I don’t like them. I just have the tendency to bake more seeds and grains breads. I have two big bags of golden raisins and dried cranberry (about 1.5 kg each) from CostCo sitting and taking room in the pantry that I so wanted to use them up. Hence, there have been and will be more fruit bread baking in the coming months. 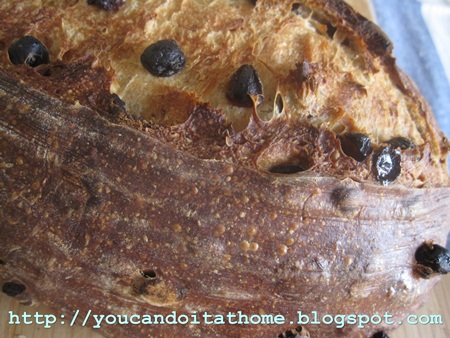 This recipe came from Bourke Street Bakery cookbook from which I have been baking more lately. Their recipes produce wonderful baked goods and those photos were so mouth-watering to look at. I tweaked the recipe a little to suit my taste and preferences, e.g. replacing 10% bread flour with whole wheat, increasing the amount of water (hydration), using only golden raisins instead of mixture of golden raisins and currants. I also reduced the amount of raisins and didn’t soak them as suggested by the recipe. 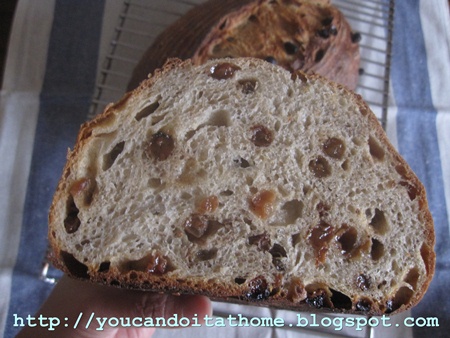 This is one of the tastiest sourdough fruit bread I’ve made so far. There could be few factors contributing to the great flavour; cinnamon and mixed spices, high percentage of golden raisins and sourdough starter (I started to think that having an overall high ratio of starter improves the flavour). Comparing this recipe to Jeffrey Hamelman’s golden raisin sourdough, we liked this better. Spices and more golden raisins added wonderful flavours to the bread. We totally love it.

Full post and recipe can be found here, http://youcandoitathome.blogspot.com/2011/06/bourke-street-bakerys-spiced-fruit.html.

Sue, that loaf certainly looks delicious. I would love to have a slice about now - perhaps, 2 slices - 1 one as toast.

I guess I will just have to try baking one before I'll ever get to taste a slice, though.

Indeed, they're delicious. The spices aroma was wonderful, and the sweetness from dried fruits give a good kick for the morning.

Oh my, I can just taste these gorgeous looking loaves.  What a lovely breakfast or anytime bread.

I love fruit toast for breakfast too.

What beautiful loaves.  Another one to add to my list!

I checked out your blog for the recipe but couldn't find the spice mix you used.....just cinnamon.

Is cinnamon the only spice you did use?  My family LOVES cinnamon and raisins in their bread so I know this one will be a hit!

Thanks for posting the pictures and the formula.

Cinnamon & raisin do so well together. They make great fruit bread. I hope your family will like it:)

Thanks for this info.

Hello Sue,
Your breads always look so tempting!
The presentation is terrific, and the flavor must be so good!
:^) from breadsong

The flavour was really good, which I think came from the spices and substantial amount of fruits in the bread. We enjoyed it very much.

I love spiced fruit breads any kinds and I think I will save your recipe for now since my apartment is crazy hot right now. Today we hit 90F and it is only June. I need to wait for a cooler weather for my next bakes. Thank again for the recipes.

You're welcome. Baking in Summer takes some guts. Thanks God we had a mild Summer this year. Even so, our house was steaming hot when I baked the hearth breads (generally had to do first thing in the morning or late at night).

Thanks for stopping by.