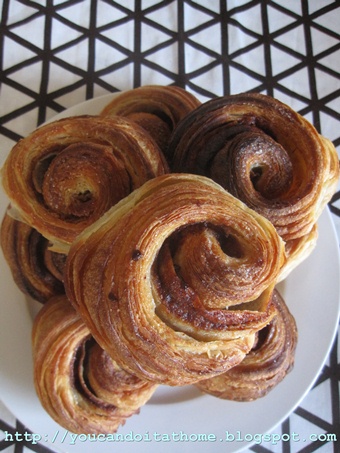 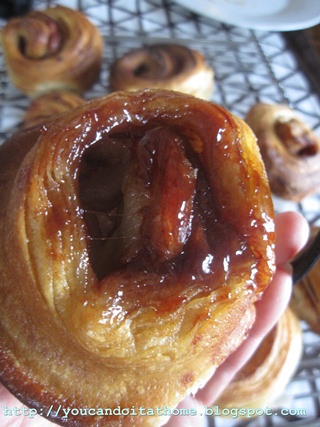 I came across the famous Tartine Morning Buns when I was searching for croissant images of Tartine Bakery (as I was on my mission to perfect the croissant making, I figured I should look up to the best:))

The buns received rave reviews on the blogosphere and I was curious to find out myself how good they are. I just bought Tartine cookbook (the pastry version) recently and look forwards to Morning Bun recipe. However, the recipe wasn’t included in the book.  I managed to locate the recipe online on 7x7 website. The bun is an indulgence version of cinnamon rolls and made with laminated (croissant) dough. That’s perfect, another recipe I can try to keep practicing on croissants.  The rolls are filled with the mixture of brown sugar, cinnamon and orange zest. Doesn’t that sound like a recipe for success, buttery flaky pastry filled with orange cinnamon sugar? Indeed, it was the success. It tasted soooo good, pure heaven.

The rolls were baked in muffin tin coated with butter and sugar, which gave it sticky caramelised bottom. A nice touch to the buns.

Though I enjoyed the bun made with croissant dough, I had the feeling that sweet bread dough should have been used in the recipe instead of laminated dough. A close look at the actual Tartine's Morning Buns gave me that impression. The bun didn’t have layers of pastry. It was simply a bread bun. Moreover, baking laminated dough in muffin tins somehow limited its ability to expand. As a result, the pastry didn’t achieve its full flakiness potential and became slightly doughy, especially the parts that were sitting inside the muffin cup. If I am to make these Morning Buns again (which I’m sure I will), I will make them with sweet bread dough or brioche dough instead.

Sue, I would be afraid to try these. They look like the type of 'trigger food' that I cannot stop eating, once started - perhaps, if I had someone to tie my hands behind my back, I would be able to stop... (^_^)

You make such wonderful foods, I don't know how you can keep from eating them all?

Yes, you're right, Ron. It's the kind of bread that it is hard to stop once you start eating them. I usually try not to have too many, but I think I had about five of them over two days. Lucky, my partner and neighbor are keen cyclists, they help eating away these pastries.

Despite their shortcomings, Sue, those look thoroughly decadent.  What if you baked them on flat trays instead of muffin tins?  Wouldn't that allow them to expand properly.  You could still coat the bottom of the baking trays with butter and sugar.  That taste combination sounds to die for.

Indeed, they're super decadent...I think that's why it's so addictive and got so much rave reviews from Tartine's followers. Can't go wrong with butter, caramel, sugar, orange zest, flaky pastry!

Thanks for the suggestion, I was thinking the same, baking in a tray, or square cake pan, so that I can leave plenty of room for them to expand.

Hello Sue, well, actually it's just afternoon here...but what a lovely sight, to see your beautiful Tartine morning buns.
The sight of these makes we want to work up the courage to try a laminated dough again.
I love the layered, swirled tops of these buns!
:^) from breadsong

Given your skills and precision, I'm sure you'll do really well with the laminated dough.

I also think the recipe might work better with basic sweet bread, and from the picture of the actual buns at Tartine, I think it could have been made from brioche dough:)

I will take your buns anytime; I don’t mind them at all. My local bakery use laminated dough for morning buns; I prefer laminated dough over sweet dough. I love your sticky caramelized bottom.

You can come take the bun anytime:)

The sticky bun was a nice touch, it gave moisture and sweet caramelised flavour to it. I love it too.

Everyone knows that croissants are a gateway bun, leading to more and more addictive delicacies.  Morning buns are the crack cocaine of baked goods.  Sue, you are hooked!  Serious treatment will be required to get you back to where you can take or leave a pastry.

My name is Glenn and I have a morning bun problem.  Your post is not helping ;-).

Those are beautiful!  They look perfect!

Morning buns are very popular among the artisan bakeries in the Bay Area.  I've never had one from Tartine, but I'm sure they are as good as they get.  Some day, when I feel skinny, I'll try to bake these.

Looks like there could potentially be lots of members joining Morning Buns Anonymous.

They were really really good. I usually can't wait to taste my baked goods and will try one once they're out. With these, I had two on one go. I won't be making them for a while, they're just too good and I can't resist them.

Thanks for the comment and your sense of humour.