I recently "discovered" an absolutely marvelous eatery fairly near me here in Sacramento called Ravenous Cafe.  We first tried it a couple weeks ago and had a delightful meal, but as a bread freak I was astounded at the really great bread they served, unlike nothing else I remembered.  I called them a few days later to learn more about that surprising bread and had the chance to talk to the chef, Mark Helms, who described it as basically a "Country Bread" inspired by Chad Robertson's book Tartine Bread.  He offered to give me a bit of his starter which I gratefully accepted (consuming another great meal at Ravenous Cafe on the way).

I'm not used to working with dough that moist but I muddled through as best I could - shaping the loaf was problematic for me.  The starter I mooched from Mark Helms performed beautiifully, and I wound up with a moist tasty bread with a very open crumb. 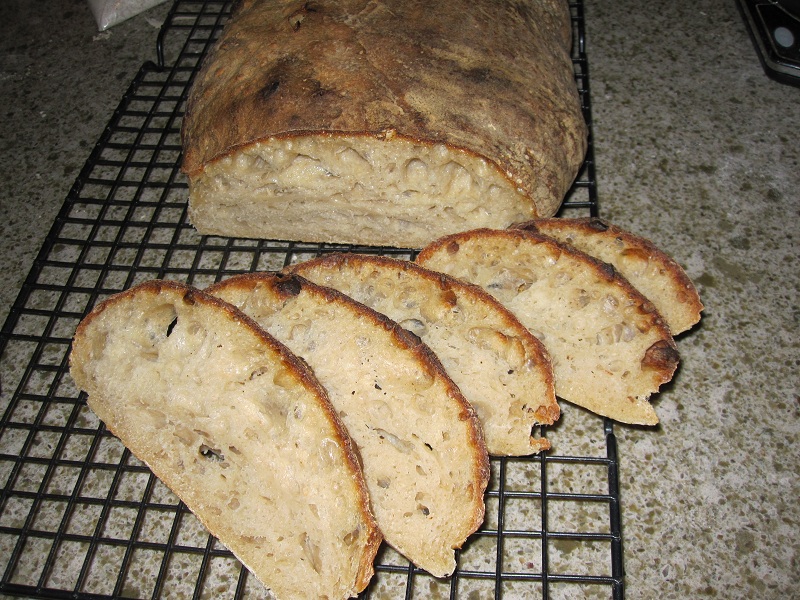 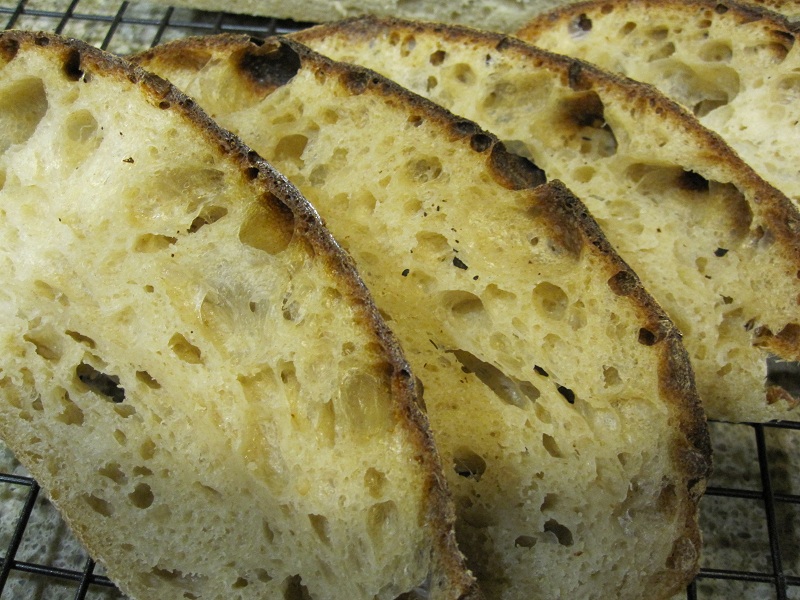 I didn't have a cover big enough to put over the loaves and they wound up toasty on the top and barely done on the underside, but it's pretty good for a first attempt.  Never made bread like this before, it's a real eye opener for me!

I'm going to have to give this a try.

Any idea why the instructions posted on the Martha Stewart link state that resting and/or fermenting dough should be kept in a dark place?  I've never heard that before!

I noticed that too, and it also seemed odd to me.  Perhaps it's something related to temperature.  I ignored it.

and great crumb.    That's great that you were able to track it down from sitting in a restaurant.   I often think of doing that, but following it through is another story.  -Varda

Covering the bread is (probably)not going to help(much) cooking on the underside. Looks like whatever surface is being baked on is not hot enough. Assuming  it is a stone, which is not being preheated to a high enough temperature.

Depending on your oven type/set up, it will take some experimenting on just how long it will take for the stone to get hot enough to brown the bottoms to your liking. Some folks say X amount of time. For me, X is at least 30 minutes at 425 - 450° F or so.

Others preheat for an hour at 500º +, but basically, it is whatever it takes to get to your desired level of bottom browning.

The bread spread out so wide on the parchment it wouldn't fit on one baking sheet so I had to use two overlapping baking sheets.  I think that seriously reduced radiative heat transfer from the glowing electric element at the bottom of the oven.  Covering the loaves would have slowed browning on top and encouraged a more even bake. Mark Helms of Ravenous Cafe told me he uses a baking sheet covered with "hotel pan", with his oven set as hot as possible.  I baked at 500F for 10 minutes (spritzing loaves and oven sidewalls at the start) and notched the heat back to ~450F after that out of cowardice.  My loaves were much less brown on the bottom than what I've had at Ravenous Cafe.

The Martha Stewart version of the recipe calls for proofing in a towel-lined bowl which I did not do, and baking in a dutch oven (which I do not have).  I now think something is definitely needed to restrain horizontal expansion because this dough has very serious territorial ambitions.

The copy of Robertson's Tartine Bread that ordered came today and I need to do some reading, I think.

I made another loaf of the Tartine bread yesterday using a brotform and covering the loaf during the first 20 minutes of the bake.  The dough stuck to the brotform liner a bit, perhaps because I didn't use the rice/wheat flour blend Robertson recommends.  I had some difficulty gauging browning because of flour adhering to the loaf.  Even so it turned out very very nice, lots of oven spring, very open crumb.  Also, the browning on top and bottom was much more similar than my previous (uncovered) try with this recipe. 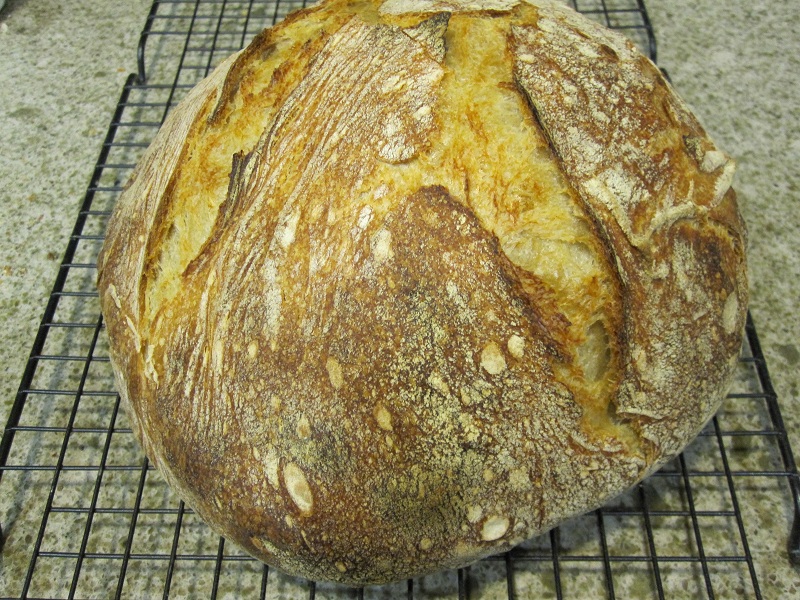 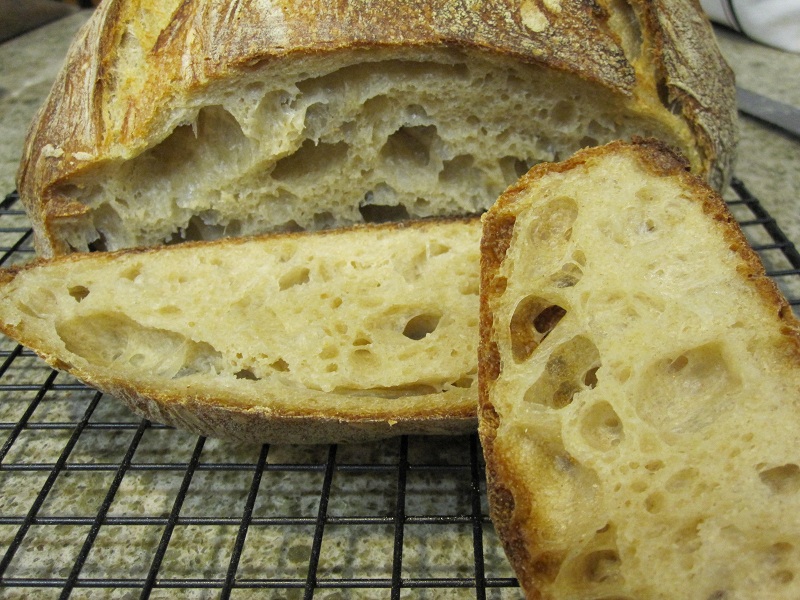 It looks very much like a ciabatta.  A beautiful loaf.