A tale of two sourdoughs

A tale of two sourdoughs

I mixed up the intermediate"wild yeast starter" Friday, the dough Saturday, and baked the loaf Sunday morning (keeping the starter and dough each overnight in the fridge between times). When I mixed up the dough it seemed too wet (perhaps I messed up the weights, I was working under pressure); the recipe says adjust consistency as needed so I added more flour until it seemed about right.  I fridged the dough up in a stainless bowl with a tight plastic lid.  I was a bit worried it might rise too much and pop the lid off but fridge space was limited.  In the morning the lid was, indeed, bulging a bit but it hadn't popped off.

I chose to just use all the dough to make a single big "miche" loaf because I didn't want to risk degassing the dough too much by dividing it.  It was probably the biggest loaf I've ever baked.

Here are photos of the result: 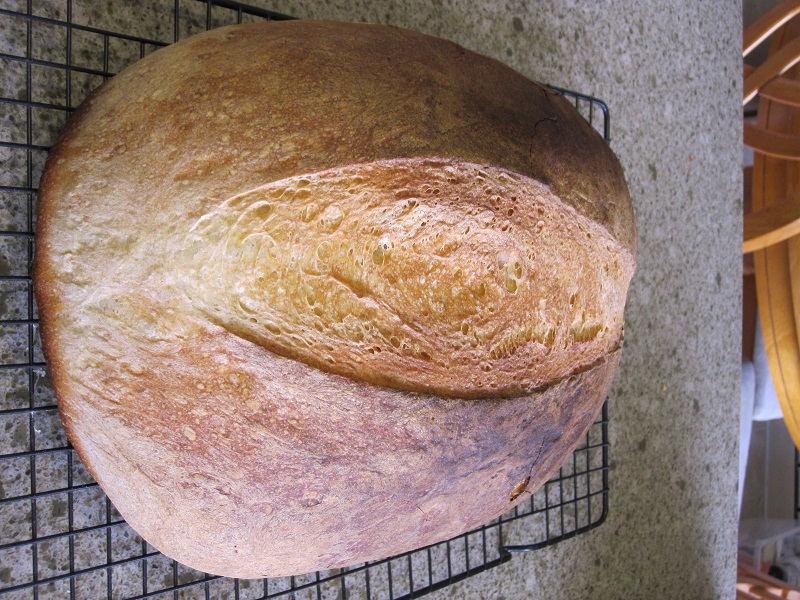 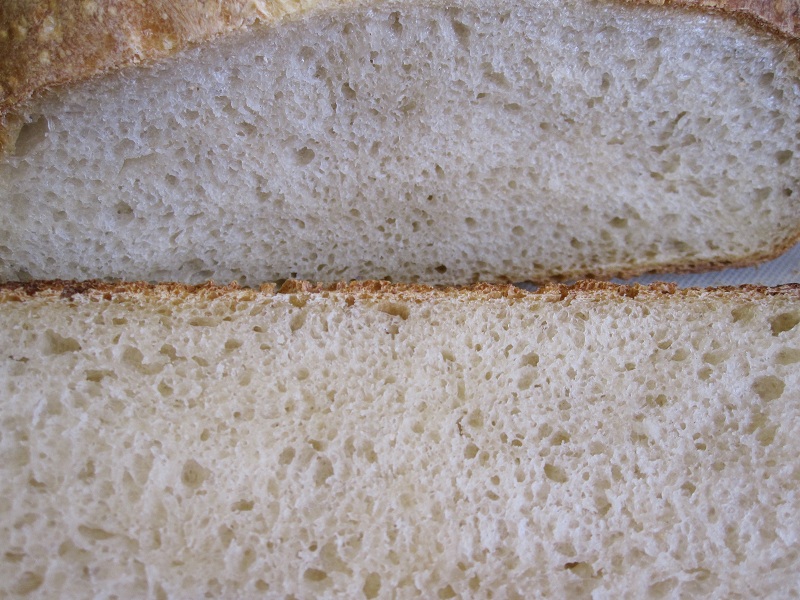 The loaf looks pretty good, and my wife and our guests seemed to like it quite a bit, but I found the taste and texture less satisfactory, less "yummy", than loaves I baked back in January using the recipe from Reinhart's Crust and Crumb.

Here's a photo from back in January: 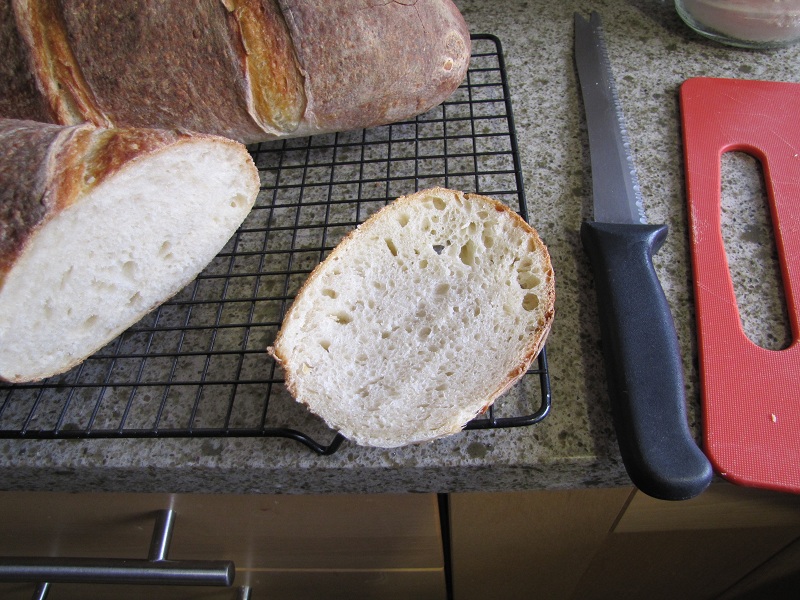 Loaves and crumb from January 2011^

The more varied and irregular holes in the crumb of the January loaves is fairly obvious.  Not visible is a difference in taste and mouth-feel.  The January loaves as I recall were a bit moister, more tender perhaps, and had better taste.

I'm a bit bemused by the difference and curious about the cause.  The recipes are very similar, and the "mother culture" is the same.  One thing different is that in January I used King Arthur Unbleached Bread Flour while in the current loaf I used a less expensive generic unbleached bread flour I got at the local Food Maxx market - both have the same labeled protein content.  The loaves in January included a bit of brown sugar in the dough per the Crust and Crumb recipe while the current loaf did not.  The January loaves were made exactly by weight according to the recipe while the latest included additional flour which I "eyeballed".  I'm not sure but I think there was a tad more salt in the January loaves.  Finally, the January loaves were retarded overnight "uncontrained" under plastic wrap while the current dough was retarded in a bowl with a tight fitting lid which restrained it's expansion.

Anyway, the two sourdough bakes tasted quite different to me, although others say they found the current effort highly satisfactory.  Go figure!

Something strange is going on. There have been a few comments about Tartine Breads performing poorly. My own loaves, following PR's Art. Breads have not performed as usual ( I thought it was me). Now I'm wondering if there's something in the atmosphere, radioactivity from Japan, this years wheat crop, extreme weather conditions, excess pollen?

Difficult to say.  Bread making can be so fickle at times.  You have mentioned quite a few changes you made to your recipe and process.  Anyone (or a combination) of those could have made the difference.  Try the January loaf again and do it exactly as you did then.  Don't change a thing.  You didn't get much height on this loaf and that could be attributed to two things: your shaping and your scoring.  You don't have much of a grigne on the latest loaf and I am guessing that you held your blade too vertically while scoring.  That will cause your loaf to flatten out rather than maintain a high profile.  Check out the scoring video in this series.  It could also have been that you weren't firm enough during the pre-shaping and shaping.