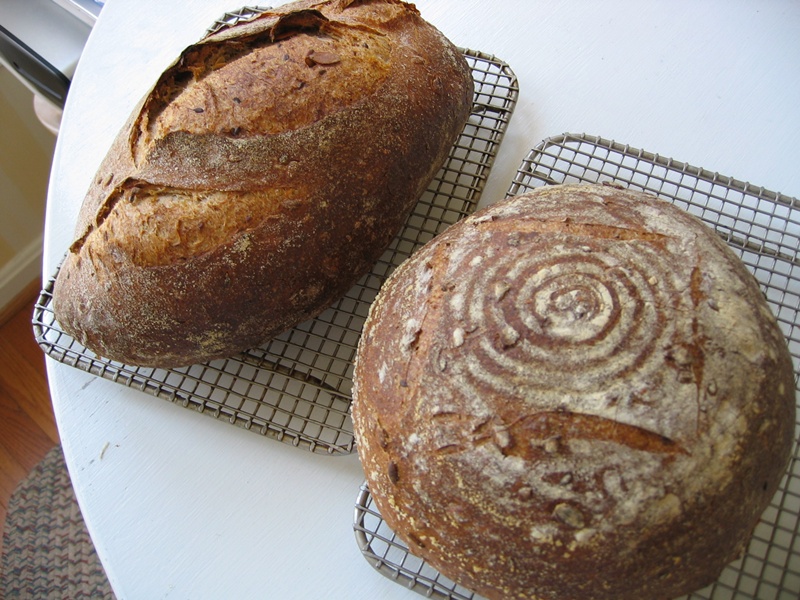 Today was a much needed day off from work. I love the new job, but we're pushing out about 650# of dough per day with an average of 3.4 bakers, and as our production is increasing we're going from comfortably busy to close to overwhelmed.

Anyway, a day to sleep in and generally relax, and of course, do some baking.

I fired up my white and rye starters last night, not certain what use I would put them to.  This morning I came downstairs and decided I wanted some good multigrain sandwich bread and turned to Hamelman's Five-Grain Levain.  Of course, I had neglected to make a soaker using the seeds the previous night, but I went ahead and mixed about a cup and a half of the following: sunflower seeds, pumpkin seeds, flaxseed and rolled oats, and poured about 240g of boiling water over them.  Lidded the container and let it sit for about 40 minutes.

From that point I pretty much followed Hamelman's recipe, with the exceptions that I used my rye starter to supplement my regular levain, and also in place of the cracked rye he uses as one of the five grains.  I also added a small portion of sunflower seeds and rolled oats not used in the soaker directly into the dough which was quite wet.

Bulk fermentation was 1 1/2 hours, with a fold at 45 minutes.  By that time, a very slack dough had firmed up considerably due to the thirsty seeds.

I divided the dough, preshaped, rested and made on boule and one bâtard.  Fnal proof was just a little over 1 1/2 hours.

The breads were baked at 450 degrees F for 40 minutes.  I didn't get a whole lot of oven spring because I really pushed the proof, but as the bâtard clearly shows that the cuts opened nicely, so the dough had a bit of final push in it. 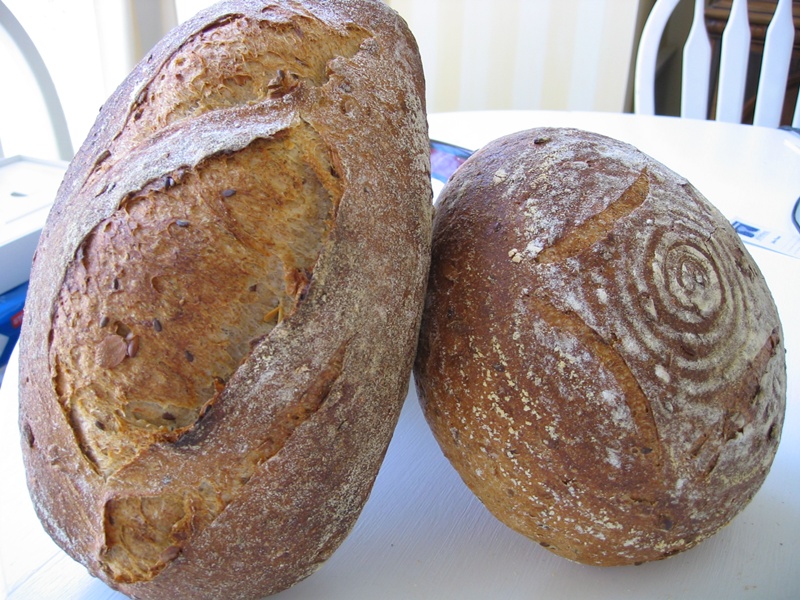 As Hamelman comments, this is a lovely table bread.  The flavors of the grains, seeds and mixed levains are pleasant and complementary, and the crumb is wonderfully light and moist.  Hamelman comments on the fact that the 98% hydration of the dough is not a misprint, but testament to the capacity of the grains and seeds to absorb moisture. 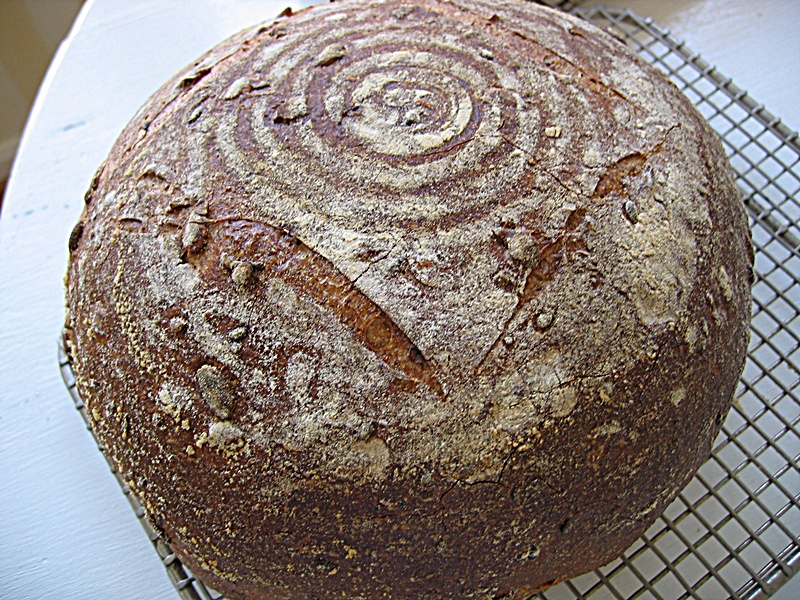 Even so, the texture of the crumb is light and fluffy. 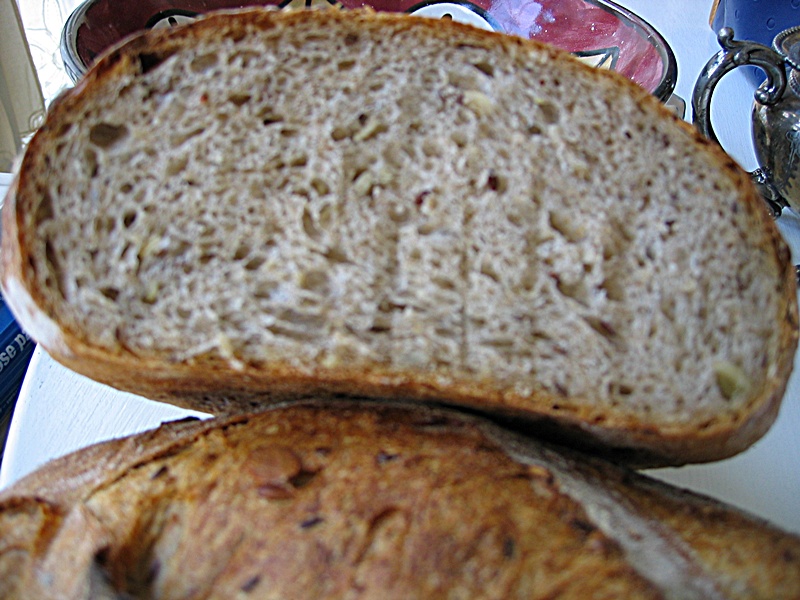 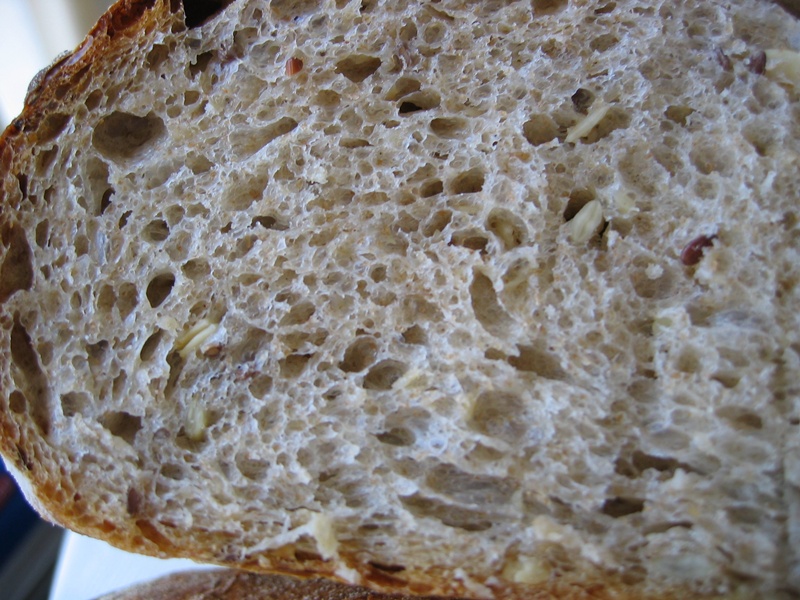 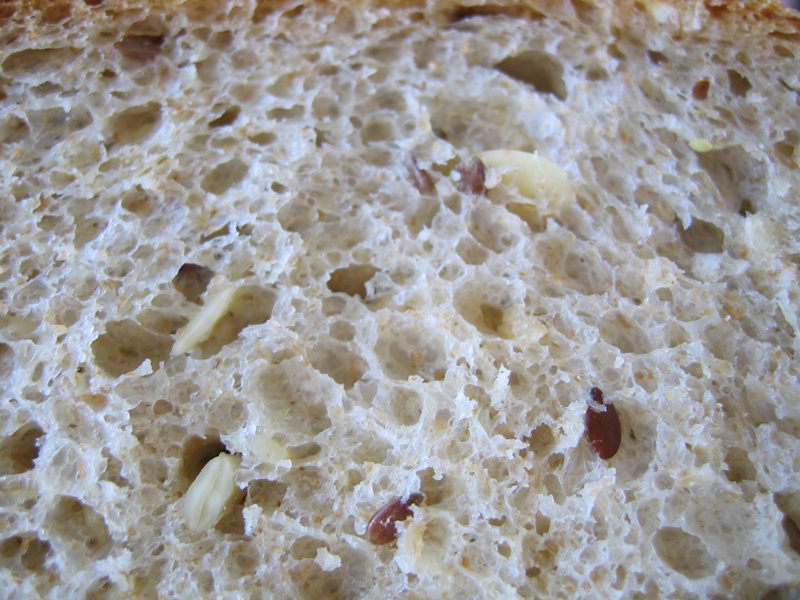 A perfect sandwich bread!  And tomorrow (and another day off), I'll be piling cold cuts high on it.

And, your lovely bread!

A little decompression is nice.  And as you know, baking for yourself is at a different pace than a production environment, so you really can savor what can otherwise be a task.

Wow, those loaves look great, Excellent presentation, as usual, too.. ;-)

Great looking loaves Larry and with plenty of oven spring from what I can tell. Love the scoring on both but particularly the pattern on the boule. I'll have to try and remember to do that one next time I make a boule. With a fine crumb like that you'll be having some mighty tasty sandwiches over the next little while. Awesome baking pal!

Thanks Franko.  I like that design - but warning in advance: everytime I underproof a boule and use it, it blows out one of the scores and you end up with a 'humpback of Notre Dame loaf.'

I held my breath for this one.

Been there, done that,... so many times I hate to think about it. When the subject of proofing and scoring bread is discussed, this to me is where the artisanal aspect of bread baking truly comes into play. No matter what striking shape or pattern you've created for the bread, it succeeds or fails at this point based entirely on judging the proof, and scoring it to allow for optimal expansion and visual appeal. Easier said than done for most of us bakers, professional or not.

I don't know how you do it...bakers hours and all!  It should be keeping you in

One benefit to the job is that you can actually eat the 'forbidden' foods and not gain weight.

I immediately slathered butter over a slice of the multigrain and satisfied myself that it was as good as advertised.

I baked a bunch of hamburger buns and hot dog rolls today as well using a pain au lait recipe from work.  Really nice recipe.  Can't divulge, but all the liquid is milk and eggs and the bread is to die for.

I too love this bread. It never dissapoint, always produce a tasty loaves.

The colour on the crust is great, as well as the scoring.

Yes, it's a great bread and has become a favorite of mine.

This is one of my favorites too, for both flavor and texture of the crumb. I've never baked it without getting blowouts in the bloom. It always has amazing oven spring.

I decided to really push the proof because lately I've been underproofing and getting nasty blowouts as a result.

Hello Larry,
Your bread's got a lot of good-tasting stuff in it - the crumb shot looks fantastic.
Nice to see the sugar bowl making a (partial) appearance  :^)
from breadsong

The sugar bowl is badly in need to some silver polish.

I've just purchased a new Atlas pasta machine, and finished off a delicious home-made tagliatelle breakfast half an hour ago. Now I'm craving more carbs after seeing your fabulous photos.

And, I'm still amazed that you find energy to bake on one of your days off... That's passion.

Oh that breakfast sounds so good.  I hope to see some photos soon.

As everyone said, Larry! It is perfectly fermented, well shaped, and well steamed and baked! A perfect treat after a hard day's work.

It's lunch time, another day off, and I'm starting to stack smoked turkey, bacon, tomatoes and a bunch of other stuff on the bread.  The ultiimate payoff, huh!

Your loaves look terrific, Larry.  I love your way of scoring on the oval shape, especially.  The crumb looks great as much as I want to bite off.

Thank you for sharing,

Nice loaves, Larry.  I've yet to try that formula, but it's on my list.

Awesome crumb, Larry.  Actually, for me that is the perfect crumb to aim for, particularly in this type of bread.  Large irregular holes are fine in a baguette, but this kind of bread I would probably toast on day three and I want some regularity to the crumb to hold onto the melted butter!  Lovely shaping and scoring, too.

I totally agree with you. This is a classic sandwich bread, and I love it for it's lightness, tighter crumb and moistness.
Larry

Looking good, as always, Larry. I can support the comments on the spring for this formula. This is my wife's favorite so I bake it often. The spring with a good steam setup is always strong. Personally, with this loaf, I don't mind the rather ragged appearance of the grigne (on my loaves.)

Yeah, I don't think I got the spring that you and David describe, but the cuts opened nicely, so the dough had some juice left in it.
Larry