I of course start by planning ahead, which means sitting on my bum and reading the instructions all the way through. Help is always appreciated, but sometimes I get a little to much help. In this instance, Smoky decided he would help me read the BBA recipe which for some reason wore him out and required him to take a 20 minute nap on the book which I was holding up. Now normally, with any of the other cats, I would simply move around alot and they would go find a place to lay that didn't move so much. Smoky though simply gave me a dirty look each time, groaned loudly, and re-adjusted himself for more zzz's. Don't tell anyone, but I finally had to kick him off and send him packing, much to his disgust. 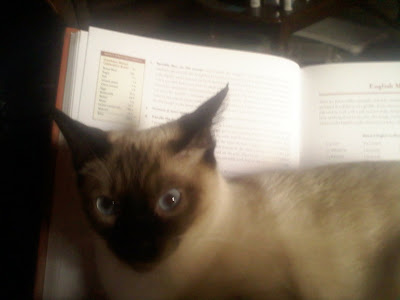 On to the making of my version of the Bread Baker's Apprentice Cranberry Walnut bread. I looked over the recipe, and realized immediately that I would have to change a few ingredients. To me walnuts are rather evil, causing stomach aches and just making a person feel horrible. Not to long ago someone suggested using pecans instead, and I tried that with the raisin bread with pretty good results. I love cranberries and decided even though they make my mouth raw, it would be worth it to try it this time. Actually, I love most fruits, but seem to have a bad reaction to them and while I still eat some usually it is in a small amount and rather quickly so they don't sit in my mouth.  It's funny how your body seems to have cravings for things that you probably shouldn't eat. I decided that the dried fruit and nuts could soak in the water overnight (I soak dry fruit so that is doesn't burn and turn hard when baked).  I set up two soakers. The other one had about 50% of the recipes flour (fresh ground winter white wheat) and kefir (similar to the buttermilk that was called for). The other 50% bread flour I saved for the next day.  I have the picture of the berries and nuts, but for some reason I seem to have either deleted or misplaced some of my pictures.  Life goes on.... 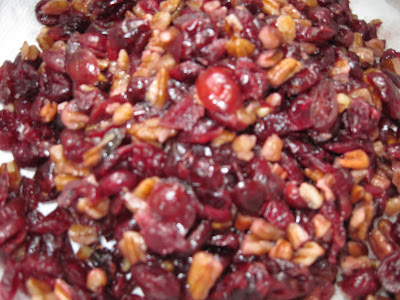 The next day I combined all the ingredients, including the flour/kefir soaker and leaving out the cranberry/nut one. The cranberries had soaked up all but a tablespoon of the water, so I included that in the dough. I had to add some water to the dough to make it the right consistency, kneading it with my kitchenaid for 6 minutes. I then added the fruit/nut mix, which added a little bit of moisture to the whole thing and kneaded it for another 2 minutes. I pulled out my King Arthur Silicone Rolling Mat and put extra flour on it, and put the dough into the middle, then folded it a couple times.  This created a boule shape, or round ball.  Just a note, if you don't have a good place to knead and shape your bread, the King Arthur rolling mat is really awesome.  I love it and pull it out for every loaf I make, even if it's just to shape it into a log for a single loaf. 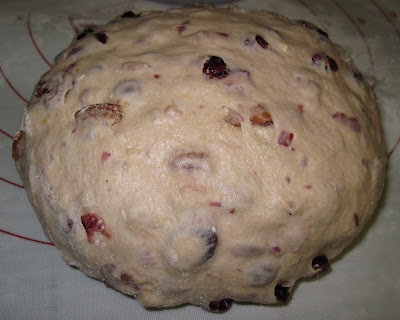 I let it rest a few minutes, and then shaped it into a log. 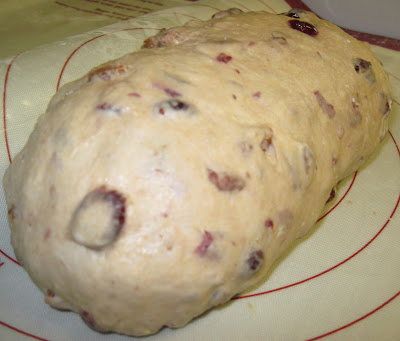 Since I used the baker's percentages that Reinhart provided in his book, I was able to adjust the recipe to make a single 2 lb loaf of bread that fit perfectly into my bread pan. I know that I was supposed to braid this loaf, but while surfing on SomethingShiny's website I found a wonderful idea. The very first picture on the site was of this bread, with turkey and cheese stuffed inside. I decided right then that mine was going to be a sandwich loaf, since this would probably not be made again till Thanksgiving.  My mouth started to drool, because cranberry sauce and turkey on a sandwich are really good together.  My husband says I'm nuts, because cranberry sauce does NOT belong on a sandwich, but I just don't agree and since I am ALWAYs right..... 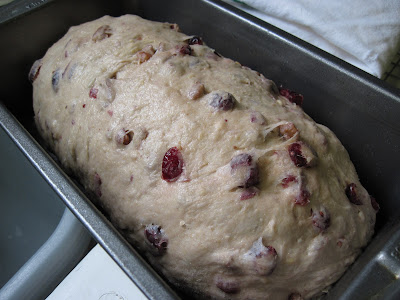 I used part of the egg from the recipe to do an egg wash on the crust, and it came out really nice. I took 8 pictures of just the crust, it was shiny and such a nice shade of brown. Just beautiful, tender when eaten, with a beautiful color and shine which made it hard to cut into. It was just to pretty! 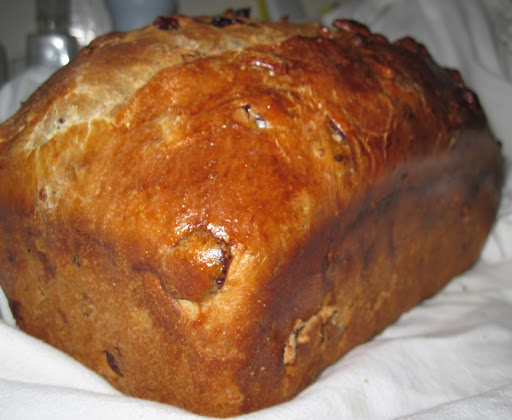 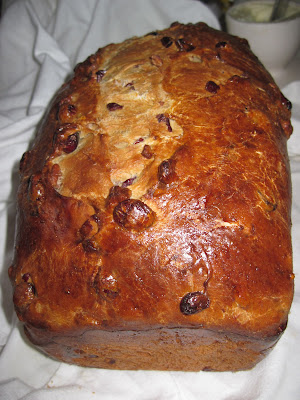 I realized that I would have to cut it open, so I could see what the crumb looked like. It was just such a perfect loaf that I really didn't want to, except for the thought of taking a bite of it! 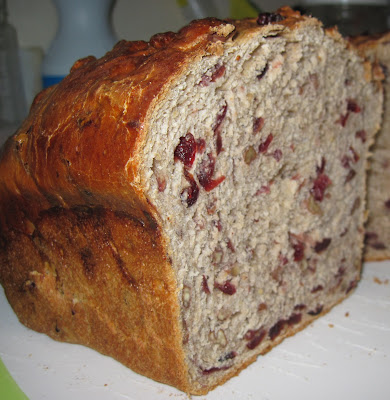 I took this picture of the crumb inside, and didn't look till later and realized it really didn't show how wonderful the crumb was. 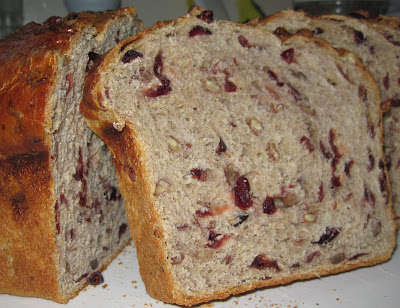 The next morning I cut the loaf into slices and froze half of it, then took a few slices and used natural lighting to see if it would help show the crumb. The crumb was darker than normal, but I think that was because of the liquid from the cranberry soaker.  It's great tasting bread! 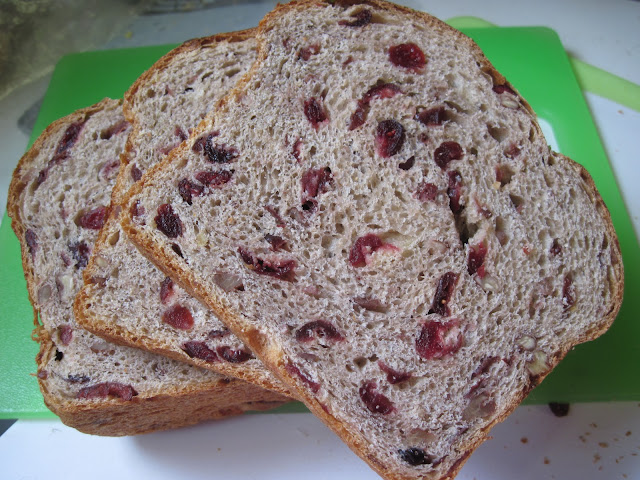 I will be making this again, probably for Thanksgiving. It has great taste, texture, and the crust is wonderful too. Definitely a holiday bread.

Cute kitty, too!  Your loaf looks very tasty, any time of year.  It has a very nice crust with lots of color, and the crumb is just perfect, I can see why you are looking forward to making another, why wait so long :)!

That is a beautiful loaf Jo_Jo.  Perfect crumb structure for that kind of bread.  Well done!

Thanks! Sigh, I wish I could eat this bread all the time, but there is simply to much fruit with high amount of citrus acid in it. During the holiday there would be others eating it too, so I wouldn't be tempted to eat more than a slice or two! No willpower here....

Thanks for always sharing!

LeeYong - Thank you for such nice comments!  I just appreciate The Fresh Loaf a lot, because it gives such valuable information to bread bakers.  That makes me want to share when I can.