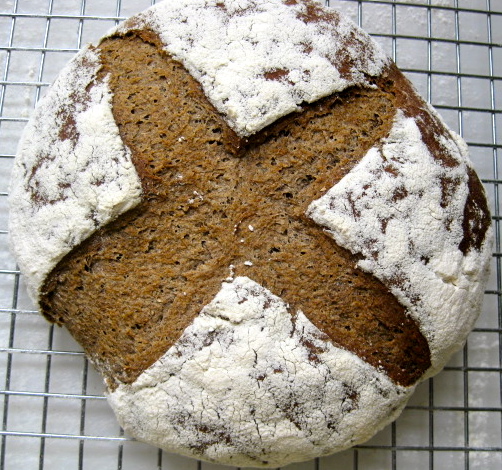 During my pregnancy with my son Per, I was very health conscious, studying all kinds of parenting books and magazines on how to provide my firstborn with an optimum of nutrition. As a result I ate buckwheat "porridge" for breakfast every day, for buckwheat is not only high in minerals, like iron and potassium, and full of antioxidants, it's also a good source of protein, and, not only that, it has more Vitamin B than wheat!

It took me a while to get used to its strong and distinctive taste, but after a while I found that I liked my buckwheat cereal, especially since I "softened" it with generous amounts of cream and honey. Seeing buckwheat flour in the supermarket, I remembered my positive experience, and thought that buckwheat might add an interesting flavor to bread. Leafing through my German bread baking books I found a recipe for buckwheat bread, and started experimenting with it.

I tried it with biga, than with sourdough, but the result was never really satisfying. Something was missing, the taste not balanced, "too healthy", or downright sour (with the starter), so I put the recipe away, to work on it another time.

But buckwheat grows right here in Maine, and when I tasted my first Ployes (French Acadian buckwheat pancakes) at the American Folk Festival in Bangor, I decided to revive my quest for a good buckwheat bread.

And this time, adding some spices and a little bit of honey, my buckwheat bread turned out as tasty as I had hoped. "Buckwheat Rye" can be made with white buckwheat flour (Ployes), whole buckwheat, or a combination of both, depending on your preference for a milder or more assertive buckwheat taste. 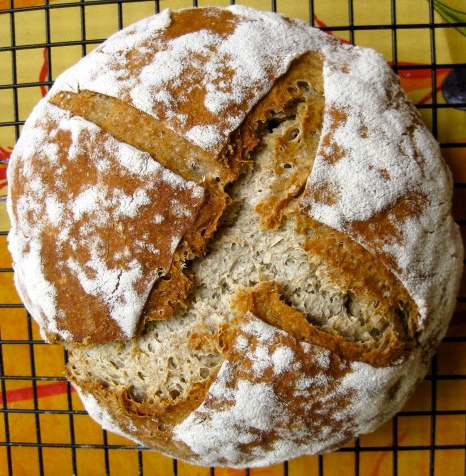 Light Buckwheat Rye - with 100% light buckwheat flour (ployes) - the other end of the spectrum. 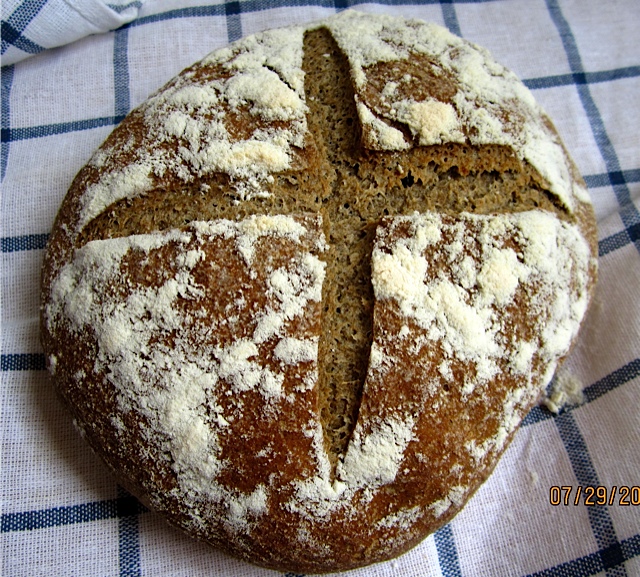 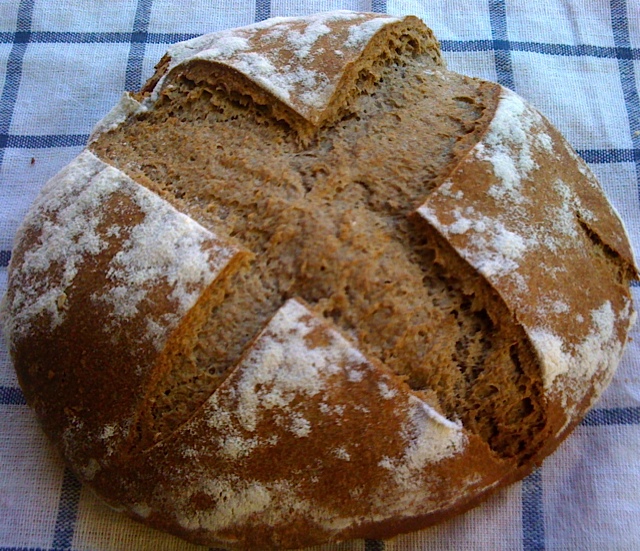 In the morning, stir together soaker ingredients, until well hydrated. Cover, and let sit at room temperature.

In the evening, stir together water and instant yeast. Add to other ingredient for final dough, and mix (with paddle attachment) on lowest speed for 1 minute (or by hand). Let dough sit for 5 minutes.

With dough hook (or by hand), knead on medium-low speed, for 2 min. Dough should be very supple and sticky. Continue to mix for 4 min. more. Dough will still be sticky (feels like rye dough)

Preheat oven to 475 F/250 C, including steam pan. Divide dough in 2 equal pieces. Shape 2 boules, and proof in bannetons (seam side up) or on parchment lined baking sheet (seam side down), for ca. 45 - 60 minutes, or until grown to 1 1/2 times their original size. (I proofed it on the baking sheet and sprinkled it with flour, so that the cross slashing would really show).

Score breads crosswise. Bake at 400 F/200 C, steaming with 1 cup of boiling water. After for 15 minutes, rotate loaves 180 degrees, remove steam pan and continue baking for another 15 minutes (internal temperature at least 200 F/93 C, and bread should sound hollow when thumped on bottom). 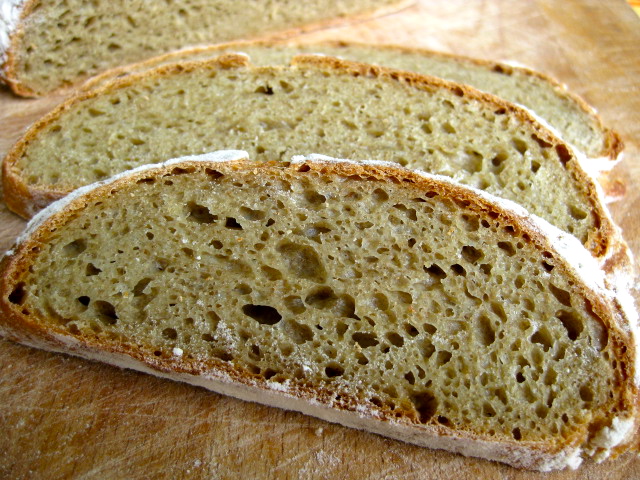 Light Buckwheat Rye, made with all light buckwheat flour (Ployes) is much airier than the darker breads. 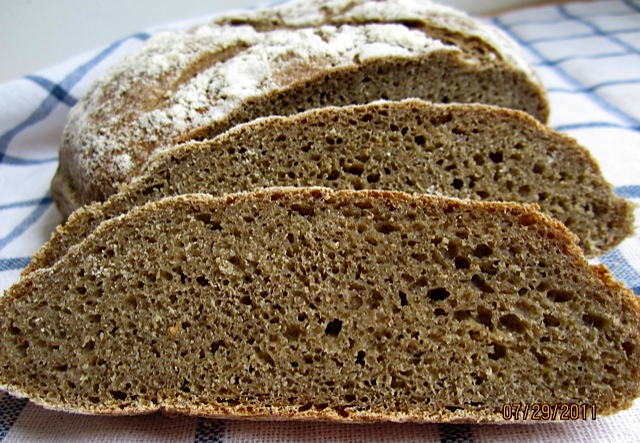 2/3 Light Buckwheat Rye has still a rather open crumb. 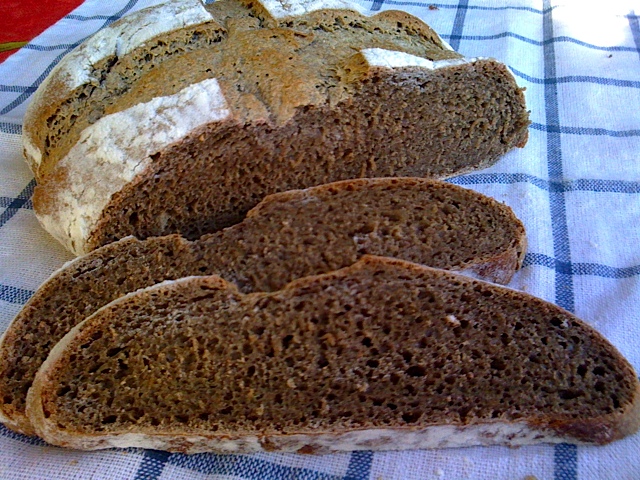 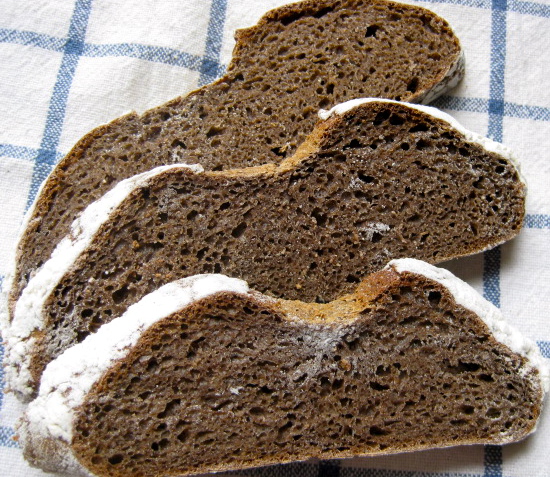 The lighter rye has a beautiful crumb.  And a nice photo.  I can almost taste it.

You actually got some browning!  I have trouble getting good crust color with buckwheat.  I didn't know there is dark and light buckwheat flour.  Hmmm

I'm planning on updating the home page this evening.  Would you mind if I swapped out your Spelt bread with this one?  It too sounds wonderful.

Glenn, I'm missing my digital camera - it "found" a new owner in Mexico - right now I can take only iPhone photos, and for some reasons I can upload those only as small files in TFL.

Mini, the dark whole buckwheat flour is from Bob's Red Mill, the light buckwheat flour is produced by the Bouchard Family Farm in Northern Maine, and mainly used for Acadian buckwheat pancakes, ployes, that are quite different from regular buckwheat galettes. Here is a link to their website, including some interesting recipes: http://www.ployes.com/

I think next time I will try a version with 2/3 light buckwheat flour and 1/3 dark.

I can't Catch Up, Karin! Wonderful, and inspiring, and talented..!

I baked your Dinkel Walnussbrot... it was a blast!! the whole house was wonderfully aromatic!!

don't flatter me too much, or else my ego will be too inflated...

I'm glad that your Dinkel Walnussbrot turned out so nice, thanks for your feedback!

Karin, You have gotten me interested once again in trying buckwheat - thanks.

thank  you for your great work and the sharing. It is always nice to read your posts.

PS You might remember a while back you gave me encouragment: I still bake without a ceritfied kitchen, sell my bread out of my trunk (10 to 15 loafs/week at least) and have a blast. Have just recently advanced to a great working sour dough starter and some nice sour dough bread.

I actually have some Bouchard Family Farm buckwheat flour sitting in my refrigerator, a gift from my son in Massachusetts. So far it has only been used for buckwheat pancakes, per the recipe in KAF Whole Grain Baking. Thanks to your great post, Buckwheat Rye Bread is now on my list of to-do bakes.

Hello Karin,
Having loved your Dinkel-Walnussbrot and it's lovely spice flavor, I look forward to trying this.
Thanks for sharing another of your formulas - and for expanding my horizons once again!
from breadsong

Danke, Barbara, I'm happy to hear that you were able to move forward with you bread selling plans - and enjoy it! What kinds of breads are you baking?

Ed, here in Maine we can buy that particular light buckwheat in the supermarket. But I'm sure you can also go on their website and order it online. Next time I'll try a 3/4 light, 1/4 dark version.

Breadsong, with your posts you expand my horizon, too!

Right now I'm in a Irish Soda Bread trial period - the store wants to offer some next week.

It's bread in my dream!

Karin, I was surprised to find you ruing a lack of good camera, because the pictures are so good.  I was glad to find such a good-looking bread not made with sourdough because I can't manage to keep up a starter.  I copied it out and will give it a try.

the problem with the iPhone photos are that the file is always too large to upload, so I have to email it to myself as a smaller version, like the photos of the medium buckwheat rye, the larger ones were made with my old digital camera.

I made this version today (see updated photos above) - very nice taste, and an opener crumb than half and half Medium Buckwheat Rye. So far the ratio light to dark buckwheat I like best.

Your bread looks amazing!  Thanks for sharing the results!  I'd love to try the version as shown in your first crumb shot (light buckwheat rye, the airier one) but the buckwheat flour I've got is labelled as 100% whole grain (from Nuweiler).  If I use that, I believe I have to adjust the flour ratio a bit.  Do you have any suggestion in terms of the recipe adjustment?

Michelle, I actually didn't change the flour/water ratio. Since I had to "remaster" a recipe from an older German bread baking book, it took some trial and error to figure out the approximate correct amounts. To the original formula I had to add quite a bit of flour - the dough was way too wet.

The light buckwheat I used is also a whole grain buckwheat, so the amount of water should be about the same in all these variations. No matter what, you also have to go by what the right consistency should be, as I described in the recipe.

Please let me know, how your bread turned out,

I'll let you know the result.  Thanks again, Karin.

updated: I've made the bread over the weekend, using whole grain rye and buckwheat in the soaker (I only have these in the house). However, the buckwheat presence is too strong to my taste.

I was quite a fun project. The dough tripled it size within two hours of the fridge time. I was so worried that by the time I checked in the morning, the dough would have been spilled all over the place. However, it didn't. But the bread didn't rise much in the oven...I was wondering if it is possible for the dough to overproof in the fridge...?

Thanks again for sharing the recipe!

I updated the formula for the following: to achieve the dramatic look of the cross slashing, sprinkle the loaves with flour, if you proof them on a baking sheet and not in a rising basket.