What's not to like about a bread with meat and cheese everywhere you bite? I think I would have preferred it with a leaner dough, less fat in particular. It wasn't nearly as rich as the Brioche from the BBA Challenge, but the crust was almost flaky like a pie crust. The texture was very tender, and the taste of extra sharp white cheddar and salami really made this a very good bread.

Some of the cheese oozed from the sides of the bread as it cooked, and the oils from the salami that I forgot to saute seemed to flow out through the bottom of the loaf. I did not put any oil or shortening in my clay baker, figuring that it would do this. Really glad it didn't stick.... 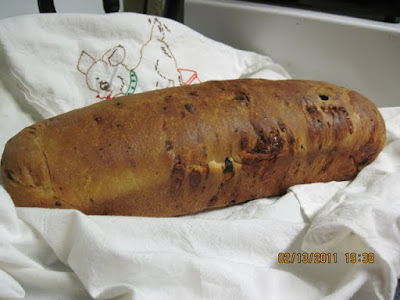 Here's the process from start to finish. First I made a sponge, which seemed really watery. More like what I use to activate yeast when I buy the wrong kind. My sponge didn't do more than a small amount of bubbling, probably because I totally forgot to scald and then cool the milk. 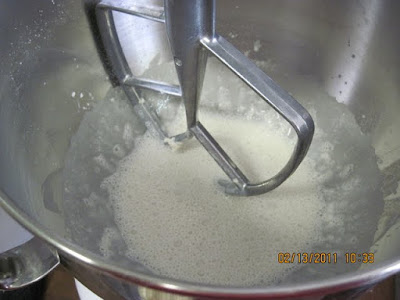 I used my baker's percentage worksheet, and Peter Reinhart's formula to make exactly the amount of dough that I wanted to fill my baker. It's been an interesting project using excel to create a worksheet that I can put ingredients into and see what percentages they are of the total (including a starter/preferment/biga/poolish), plus my daughter helped me create a section that works backwards from the percentages and gives me the amount in ounces and grams for each ingredient based on the amount of dough I want to make. I have tried to use quite a few different ones in the past, but they were always more complicated than they were worth (in my opinion). Here are the ingredients all measured out and ready to put into the mixer. 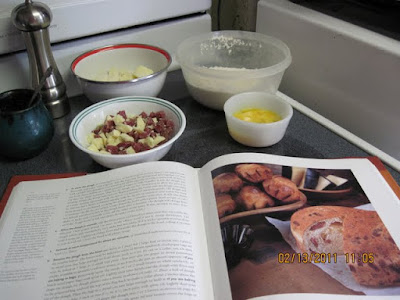 I put the flour etc into the mixer and mixed it for a few minutes, then allowed it to rest. I then put the dough hook on and started adding the butter last, which made the dough all paste itself to the bottom of my mixer. I fought with it for a few minutes, but decided that it needed to rest a little bit longer. Most of the butter was incorporated, but it really needed to be kneaded for a while longer. 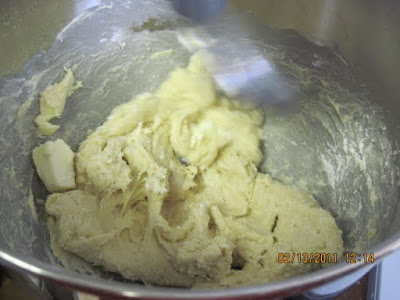 I have a nice picture here of kneading the dough and it starting to form into a ball, but totally spaced on a picture of the dough cleaning the sides of my mixer bowl. It really was a nice dough to work with, so I am disappointed that I forgot the picture. 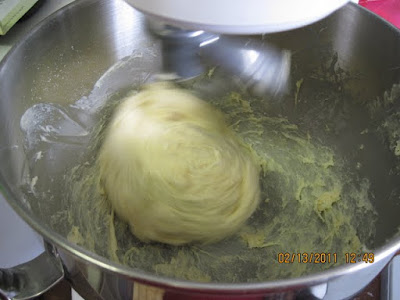 After I finished kneading the dough which took a full 10 minutes before it came together nicely, I then used my mixer to add the cheese and meat. The other time I made something similar to this I put the meat and cheese in during the shaping stage, so I thought I should try this way. I also figured that grating the cheese would just incorporate the cheese into the dough, and I wanted chunks of oozy cheese rather than a dough that tasted like cheese. My only regret was cutting the cheese into to small of chunks, I should have made them about twice the size of the salami. I formed it into a boule and placed it into a greased bowl. 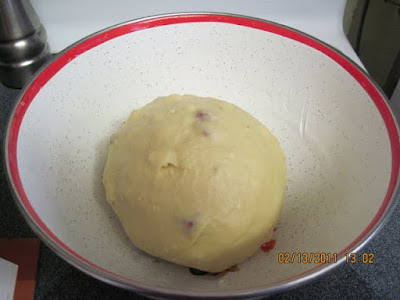 Here's the dough 90 minutes later, ready to be shaped into a long loaf for my clay baker. 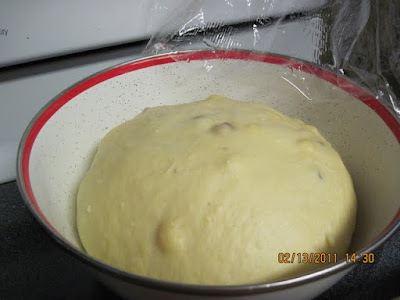 I really like this clay baker, but it has been a project learning how to bake bread in it. The bread I make in it though is really awesome. That's my new Bunn coffee maker in the background, which is replacing my Keurig coffee maker. I have had the Keurig since last February, and in November it started refusing to make coffee and wants to be descaled every 2 weeks or so. After pouring vinegar through it twice in the 3 weeks my husband was gone on a business trip I asked him to bring me home a bunn, because I think it makes excellent coffee. Keurig makes an excellent cup of coffee, but it sure didn't seem to make a reliable machine for me. 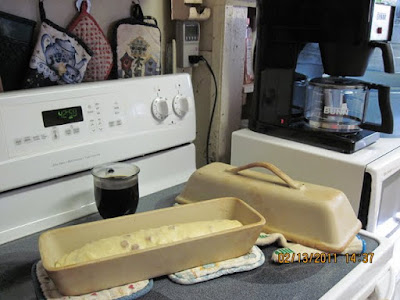 Shaped and ready to proof before baking. I allowed it to rise for 90 minutes, which seemed a long time to me, but it worked out fine. 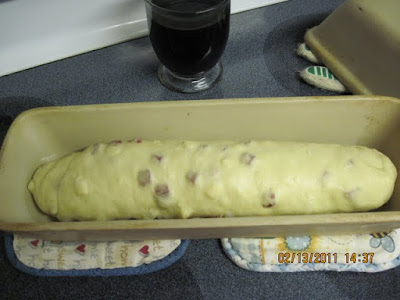 I baked mine for about an hour and ten minutes, partly because of the clay baker not being preheated. For my leaner breads I bake a loaf that size at 425* for 30 minutes, plus another 15 uncovered for browning. Makes some nice bread.

Not sure I would make this bread again, unless I cut the butter down in it. I really don't think it needed so much, especially with all the grease from the meat and cheese. I have to admit though, this was a really good bread. Happy Valentines Day!!!!

Jo, your crumb is so open and airy. I am quite impressed. I forgot about this bread. I loved it. You have inspired me to make it again.

Thanks for such nice compliments.  The texture was really light and almost flaky as well.  It was a very nice bread, and I would definitely make it for a special occasion or as an appetizer in the future.  I am always happy when my breads turn out like they are supposed to.