Back in the fall I promised my niece-in-law that I would make kolaches for her birthday at the end of November. Which I did, using the recipe from the point of departure. They were OK, but not quite right. Too dry, a little doughy and the flavor was not quite the same. Wait a minute, you say, not the same as what? What the heck are these kolaches of which you write? Right smack in the middle of Texas there's an area that was populated by people of Czech descent. Well, a bunch of Germans, too, but right now we're interested in the Czechs. They brought a number of traditions from the home country that have worked their way into local culture, most prominently the sweet roll that makes a true Texan's heart do a little extra thump---the kolache. When I was little, the ladies from the Catholic church in Ennis would come up to our church in Dallas to fundraise by selling home-baked kolaches to the big city folks. We didn't get quite as excited as we would for Christmas that weekend but it was right up there with, say, Easter. Mom would buy six dozen and freeze five of them to be brought out for special occasions during the year. We got to eat one box that morning. Now, you have to realize that there are nine kids in my family. Add two parents and that meant that we each only got one kolache. And I still remember those five or six bites as a highlight of my year.

After a couple of my brothers moved to Austin to go to the University (no need to qualify which university in Texas) our kolache supply got a little steadier. Anyone who made the drive between Dallas and Austin was required to stop in West, Texas (the name of a town, not a region that is in central, not west, Texas) and pick up a couple dozen. It was a regular enough occurrence that we could request certain fillings instead of just grabbing whatever was available. I always went for apricot first, cream cheese second. Or maybe prune. And then, I grew up. Moved away. Lost my source and only ever got a kolache fix if my visits to Dallas happened to coincide with an Austinite's. Joined that community of expat Texans who could only dream. Now and then I'd find a bakery that claimed to make them but they were never anything close to what I remembered. You know, if it's not right, it's just not right.

I'm not going to reprint her recipe. You can go see it for yourself. I will just tell you that I found I had to bake them a little longer than her timing states, more like 20-25 minutes. It may just be that I need to check my oven temp. There are some tiny details that she leaves out that make them even more perfect like you should put them close enough together on the baking sheet so that the oven spring makes them just kiss each other and you wind up with a slightly squared off, not perfectly round finished product. I found the Posypka recipe needs either more butter or less flour/sugar to make it clump properly. She only includes a recipe for apricot filling but it seems more authentic to have a variety so I made three kinds. I used some Trader Joe organic strawberry preserves for some which, while cheating, still came out well. I took some plum conserve my brother made from his home-grown red plums, drained out most of the liquid and mashed up the plum bits. Those, too, were pretty successful. And I really wanted some raspberry ones so I just tried some raspberry jam I had in the fridge. This was way too watery and made a mess on the cookie sheet. They also got the 'best taste' vote from all my testers so I'm going to work on how to make a drier version next time. I also have a request for the cottage cheese/cream cheese filling from my nephew. Can't wait to try it. Thanks for sharing the tradition, recipe and pictures.

Okay, I only lived in Texas for 5 years, but I still miss kolaches!  Maybe not quite as much as I miss Mexican food here in South Africa, but close.  Luckily, I can make my own.  And, when we get back to Kansas, there's a kolache shop about 4 miles away from my house.

Mary Gubser's "America's Bread Book" has a recipe for kolaches that she got in Texas.  I have made them, and even though I add extra flour because the dough is so very soft, they are light as air, and better than any I've eaten anywhere.  Delectable!

it is nice to see how kolache are popular in Texas :o)  I would never imagine that!

But there are many recipes and many shapes how kolache can be prepared... You are right, I bake them definitely more than 15 minutes, maybe 20-25 depending on size.

Even posypka (just czech world for crumble) can be made with various ratios. Some people make flour-sugar-fat in 1:1:1 ration, or 2:1:1. Personally I prefer something like 10:4:4 (all by weight).

Also the flour used for posypka is usually coarser (the flour here are different from US).

I still remember making over 100 of these in "mini" version for my marriage. This is a tradition ;o)

Well, isn't this getting to be the well-traveled post: Texas origin, East Coast recipe, West Coast baking, comments from in the middle (more or less), South Africa and now Czech Republic! Thanks for the comments. Zdenka, do you have a good savory filling suggestion? We only ever ate the sweet ones in Texas but I keep reading that you can do them with sausage or cabbage.

I have never been in Texas but I'm Czech and I make kolace quite often. Yours look great and after looking at the recipe I must say that it sure is the real thing. If you'd like to "Czech-out" more kolace recipes, their various shapes and fillings, look here:

If you like something you see, you can write me a message and I will be happy to translate the recipe for you.

PS: As to the filling - Try cream cheese (plus a little bit of sugar and milk, and maybe a teaspoon of vanilla extract) on the inside and prune butter (lekvar) on top. Lekvar is not as watery as marmalade.It's also good on the inside but then the pastry gets harder a little faster.

Here is a sample of my kolace with double filling... 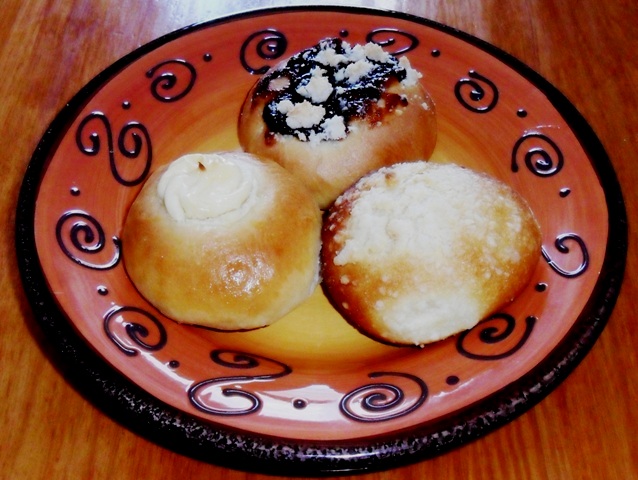 Hi all, I tried the Homesick Texan's recipe that the original poster linked to.... I followed the instructions but found the dough very wet. It stuck to my hands making it very difficult to knead. I added more flour - about an extra 1/4 cup - but I didn't want to add more in case that would make the dough more tough. The dough was still relatively sticky after kneading, though more manageable. So my question is: should I have added more flour until the dough stopped sticking to my hands? Also, does anyone have guidance on how to convert the recipe's measurements from cups to grams or something other unit of weight? Thanks!