Anybody getting dressed up for Halloween?

Anybody getting dressed up for Halloween?

Just wondering if anyone else is "nutty" enough to get dressed up for Halloween and go to a costume party/ball?  My daughter and I have been going for the past three years and this will be the fourth time we dress up!

My husband isn't into this but he doesn't mind us going out.  In fact, the whole thing amuses him because we really work at our costumes!  It seems harder and harder to find a nice place to go because we are pretty "picky" and won't go to parties in bars.

This year we had to resort to spending a lot of money ($70.00+ per person) to go to a "ball" in a very fancy catering hall.  Not what we had in mind, but we did so much work on our costumes, we wanted to find someplace to go!  We were originally planning to go to an event in an outdoor tent at $30.00 per person but that was cancelled at the last minute due to lack of response--they told me they only got 10 people to go!

The first year, we went to a private house party (very nice) and I was dressed as a pirate and my daughter was what is called a "Coffin Witch".

The next year, I was a "Spider Witch" (had all kinds of spider accessories) and my daughter was a fortune teller.

Last year, I was "Lady Luck" (a long green gown with a boa made of fake dollar bills and a hat that looked like a roulette wheel, pretty funny) and my daughter made her entire costume, "The Titanic Ghost".  Both of us looked great and we both won first prize in different categories!

This year my daughter is going to wear her "Titanic Ghost" costume again (it is so great that she really wants to get more use out of it) and I made up a really cute costume a "Chicken Farmer"!  I bought a straw hat and decorated it with red and white checked ribbon, daisys, and fake yellow baby chicks!  One is even sitting on the top of my hat!  I got a pair of denim overalls on eBay and they fit me perfectly, just as though I had tried them on!  I slipped a daisy in the pocket, too.

I have a couple of plaid shirts I can wear with the overalls and I bought a pair of plaid rubber rain boots in Costco.  I also bought a straw/wood basket which I filled with real hay (I have easy access to that, as I REALLY have chickens) and I bought a life-size hen covered with real feathers to sit in the basket.  I also bought wooden eggs to put in the basket, along with more baby chicks (the same ones that are on the hat--got those at Easter time), and I am also going to carry a life-size feather covered rooster!  I made a sign to put on the basket "Farm Fresh Eggs" $1.00 Dozen and "Baby Chicks" $1.00 each.

I was also lucky enough to find a pair of long blonde braids to put in my hair.  I made bows for the ends with the same red and white checked ribbon I used on the hat.  With the hat on, they look like part of my real hair!

My daughter's boyfriend is coming along this year, dressed as "Dracula".

I'd love to hear if anyone else has plans for the weekend!  Genie

I'm going as a baker, complete with a tray of fresh-baked bread (to a neighborhood potluck Halloween party) and my best friend is going with me as a sommelier.

I agree with Glenn, GO GIANTS!!!

I'll be Walter Bishop from Fringe, if I'm not too lazy to do anything :P

We will be going as Don and Betty Draper, characters from my 2nd favorite obsession, (baking bread being my first), Mad Men.  Don't even know if anyone will recognize who we are!

It would be fun to be Peter Reinhart. I could dress up as a baker, put on a bald cap, and wear my new glasses. (No offense, Peter!) Although, I don't think anyone outside of this community would get it! :o)

All the other bread freaks would get it immediately, and really, isn't that who counts? 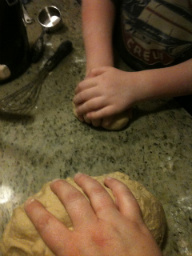 We're all going as characters from Toy Story. My 5 year old will be Buzz Lightyear. My teen son will be the Alien toy, My husband is Woody and I'm either Bo Peep or Jessie - diepending on how much time/energy I have left. Mother in law (who lives with us) says "No... it's for kids... Pfft.)

My grandson would go crazy over your costumes.  "Toy Story" is his all-time FAVORITE!  Have fun!  Genie 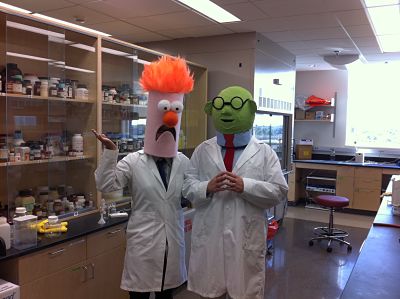