I have a problem with my bread - I cannot eat it soon enough. I usually need a second, or third day to finish a loaf. It used to be even worse when I made the loaf sizes that most formulae call for, but for some time now, I have split the dough into 3 equal parts, or 2 parts if the batch came to less than 2 pounds (900g). I like loaves about the size of Susan's Simple Sourdough http://www.thefreshloaf.com/node/13771/simple-sourdough-909

The three loaves below were made this past week. The dough was put together on Saturday evening and the first loaf was baked the Sunday. Tuesday I did the second loaf and the third on Saturday, making the third bake a full week from the initial mixing.

Originally, the formula was based upon Flo Makanai's 1.2.3, Sourdough http://www.thefreshloaf.com/node/9346/123-easy-formula-sourdough-bread but I found the over 71% hydration level a bit too wet the first time I tried it. So, I started playing around. This time, I added the Chia seeds that Shiao-Ping first drew my attention to in her blog http://www.thefreshloaf.com/node/18407/chia-sourdough-two-ways and I continue to experiment, but this version is quite good - as is. The Chia seed gave it a new nuttiness to the taste experience. The next time, I think I will increase the amount of Chia and also increase the rye flour, but that can wait a bit.

Saturday evening at 7:30 PM I mixed the levain in large bowl. Added all water and mixed until smooth, then added dark rye, salt and mixed well. I had meant to hold off on the salt until the morning, but included it before thinking. Finally, I added the AP Flour. I let the dough rest 30 minutes covered, then turned it out on the work-surface. It is a very sticky dough at this stage. I used a plastic scrapper and my hands to flatten all the dough to about 1 to 1½ inches thickness. I then sprinkled over the flattened dough all the flaxseed meal and chia seed, Once that was finished I did a series of letter folds with help of a scrapper and some flour dusting to reduce the sticking to my hands. Finally, I worked the dough into a thick log and dividing it into 3, equal 423g pieces. Each piece was then formed into a ball and placed in separate 2L/2 qt. oiled, plastic doubler, lidded and placed in fridge @ 9 PM.

Sunday morning about 8:00 AM, I removed the first 423g dough from fridge. Gave it an hour to warm some, while I had breakfast, and then flattend the dough into a rectangular sheet of less than a 1/2 inch (12 mm) and began letter foldings. I repeated this 3, or 4 times with rests of 10 minutes between each group of folds. About 10 AM, I formed the dough into ball and used a bench knife, turned at 45º to press its pointed corner into center of ball's top making a deep cut. I rotated blade 90º and repeated this action. Hoping that after the dough's final rising, that these cuts might act as the crack lines when the dough was baked in the Dutch oven, I firmed the ball and placed it in a floured, cloth-lined brotform, with the dough's cut-side down. After a 6 hour rise, the dough was turn-out directly into the preheated Dutch oven, lid-covered, and returned to the hot oven for 20 minutes, then uncovered for an aditional 20 minutes, making a 40 minute total in 425ºF oven. When removed, the center temperature was 207ºF. The loaf was cooled on wire rack.

Below is that first of those three loaves, along with the Dutch oven that it was bake in. 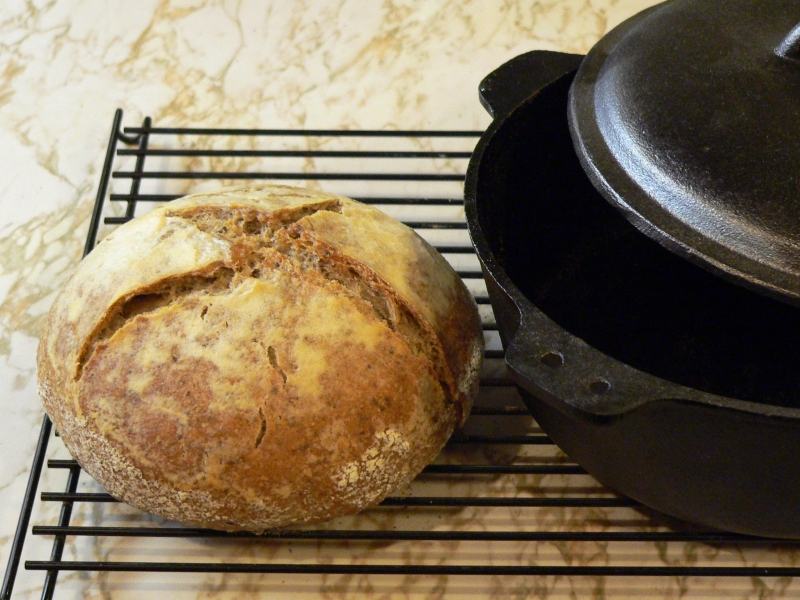 Cooled and cut, the crumb can be seen in the image below, and tasted great. The Chia seed added a nice nuttiness to the flavor. 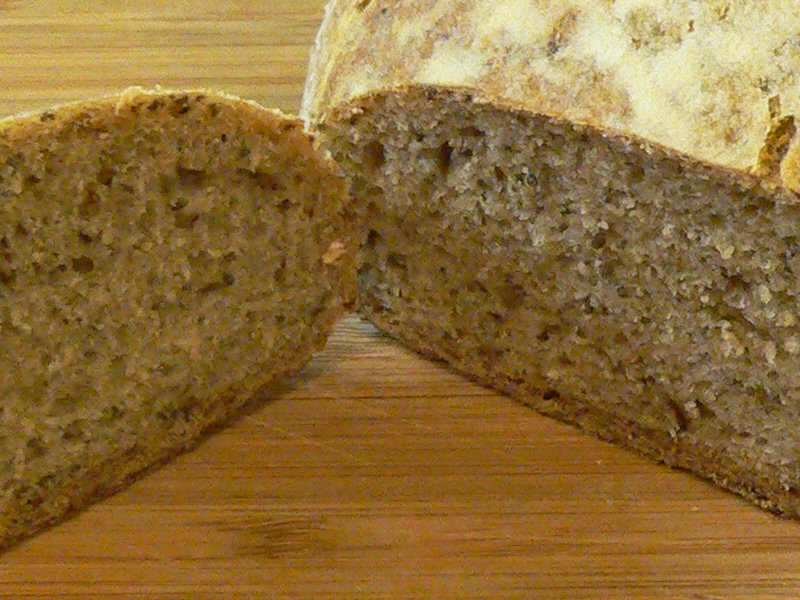 Loaf #1 had a reasonable openness to the crumb, but I would have liked it a bit more open.

The remaining two chunks of dough had been surface covered with olive oil and place in individual 2L/2qt. covered containers and stored in a fridge at 33 to 35ºF.

Before getting to the second loaf, I will digress to mention that one of my Silpat sheets has become so laden with the oils from hundreds of cookie bakings that dough no longer sticks to it. Further down, when I get down to the preparation of the third loaf, I will include a photo of the dough kneaded to a 1/4 inch ( 6 mm ) thickness with no flour dusting, nor oil coating - other than that which has permeated the Silpat sheet.

The second loaf was made two days later, on Tuesday. It was taken from the fridge at 8 AM, immediately palm-pressed into a rectangular sheet of about 3 to 4 mm in thickness. It was then rolled across the narrow dimension, flattened, and folded in half, lengthwise, seam sealed, and rolled smooth into a final baguette shape. 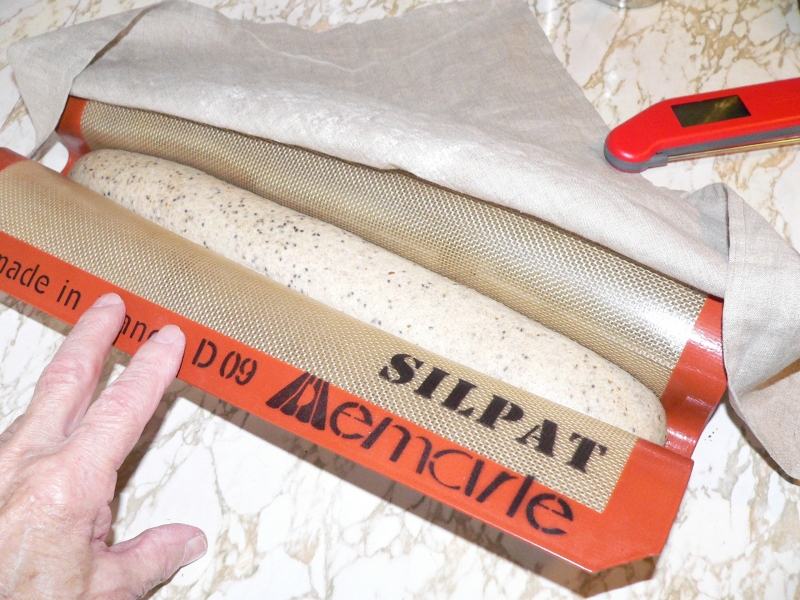 It was permitted to rise for about 7 hours. Then it was slashed, sprayed with water and appears in next image, just as it was about to go into the oven's heat.

The second Bread of the 3 loaves, on parchment paper and ready to be place in the oven on the hot oven stones.

Once placed in the preheated oven, on the hot oven stones at 450ºF, it was steamed for the first 10 minutes. At 20 minutes, the temperature was dropped to 425º and baked for another 20 minutes - total of 40 minutes.

It was then removed and cooled for an hour and a half. It looked like this: 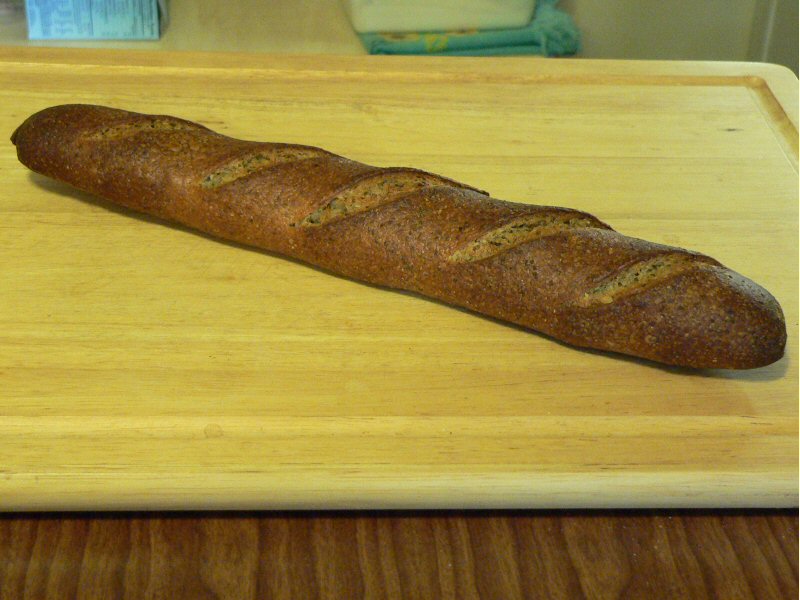 The flavor was even better than the first loaf had been. The well caramelized crust having a beautiful nuttiness from the Chia seeds combining with the rye flavors. Despite the extended time in the fridge, sourness was quite mild. The crumb, as you can see in the next photo, was a bit more open than it was in the first loaf, baked in the Dutch oven.

Below is a detailed shot of the crust, and the dark Chia seeds can be seen very clearly in the crust. 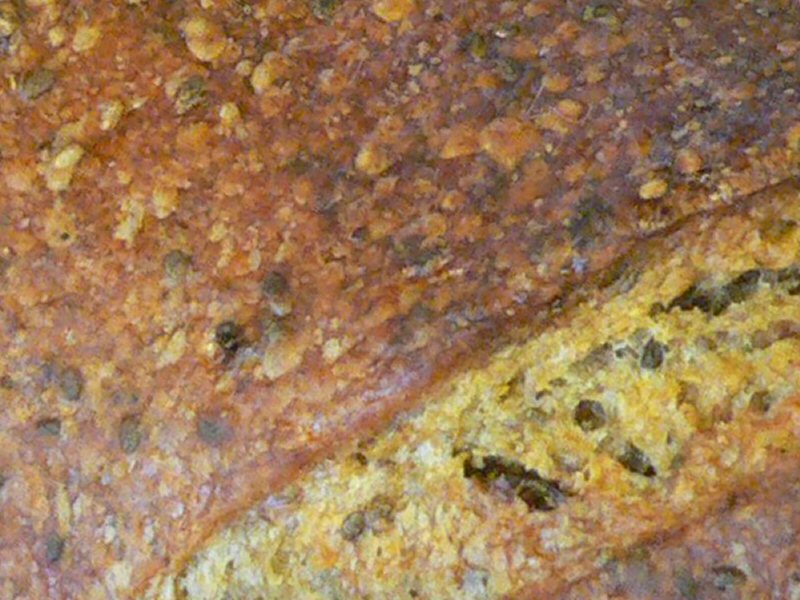 Close-up of a portion of the second loaf's crust, showing the dark Chia seeds.

I am temped to do a painting based on the image. :-)

The third loaf was made on Saturday, one full week from the initial preparations of the dough. Just after 8 AM, I took the dough from the fridge and immediately turned it out and palm-pressed the very cold - less than 40ºF ( 4ºC ) - dough into a rectangular sheet with the average thickness about 3 to 4 mm ( 1/8 inch ). I had decided to add a bit of bread spice to this loaf, and I considered the thin sheet was the best way to do that at this point. In the photo below, which was prior to adding the spice, the dark Chia seed stand out clearly. 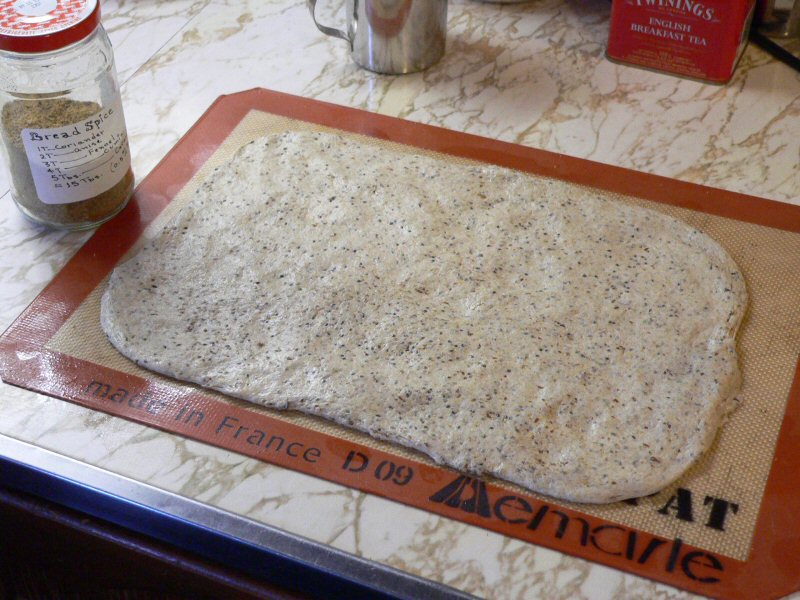 The dough for the third loaf, preparatory to the addition of a bit of bread spice.

The bread spice was spread across the dough surface and then I started letter folds in the long axis. No, added oil, nor flour dusting was required for the cold dough on this much-used Silpat sheet. You can judge the dough thickness in the next image, taken at the first start of the initial fold. 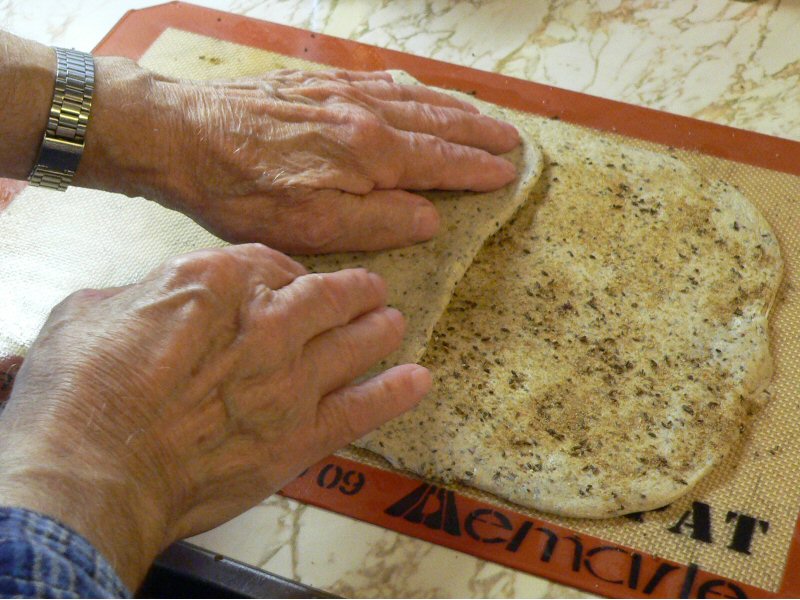 Closing the bread spice into the dough with the beginning of a couple letter folds.

Following a set of only two folds, the second at right angles to the first, the dough rested 15 minutes and then was final shaped. 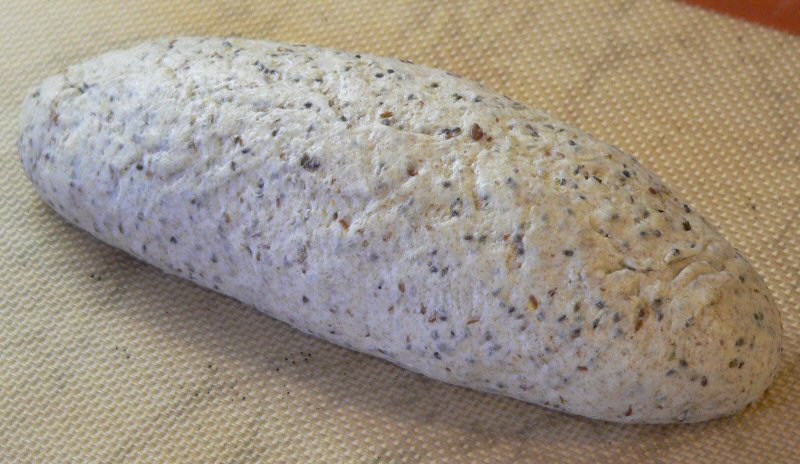 Final shaped batard prior to a 7 hour rise. 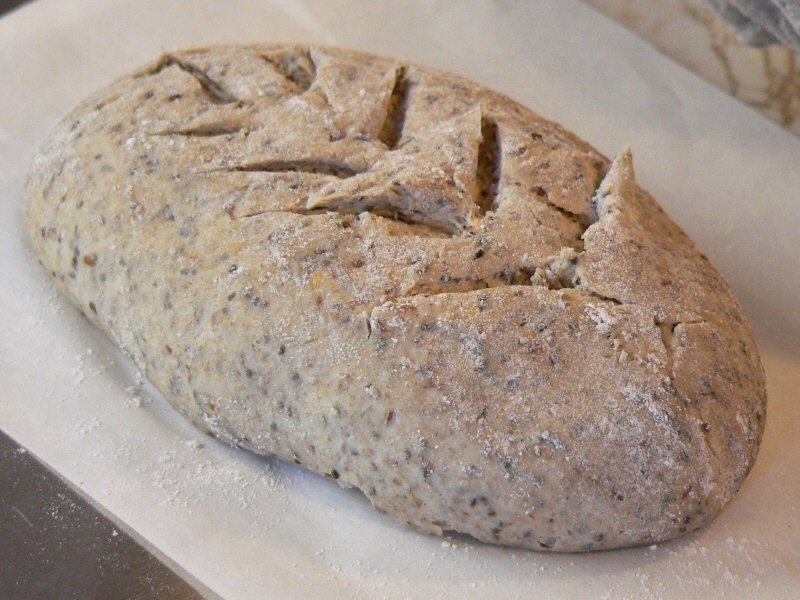 Following the 7 hour rise and my butchering the attempted decorative leaf slashing :-(

The loaf was turned out of the cloth-line brotform onto parchment paper and peel. Slashed in a poor attempt to form a leaf-line branchlet along the length of the loaf. It was sprayed with water and inserted into the 475ºF oven ( 245ºC ) with the parchment paper onto the preheated stones. A cup of boiling water was added to the oven's bottom steam pan at the same time. Three additional sprayings were given during the first 10 minutes of the baking. After 20 minutes, the temperature was reduced to 425ºF and the steam pan checked to be sure it was empty, and the oven door cracked to allow any remaining steam to escape during the last 15 minutes of the bake. After a total time of 35 minutes in the oven, the loaf removed and the instant read temperature in the loaf was 207º. 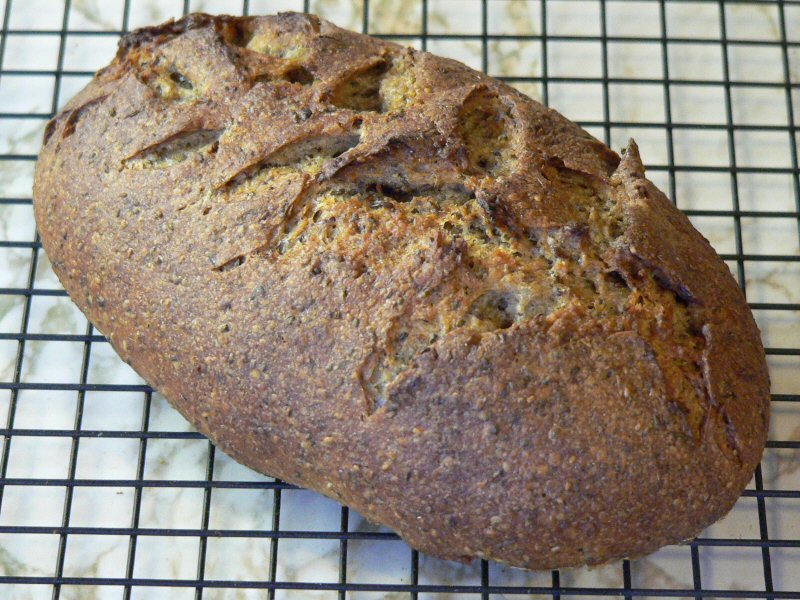 The loaf was cooled for an hour and a half before cutting. Below is a photo of the crumb, which is about the way I like it for a general purpose sandwich, or jam on toast bread. The taste now has a fuller sour tang to blend with rye, Chia, spice flavors. A very satisfying 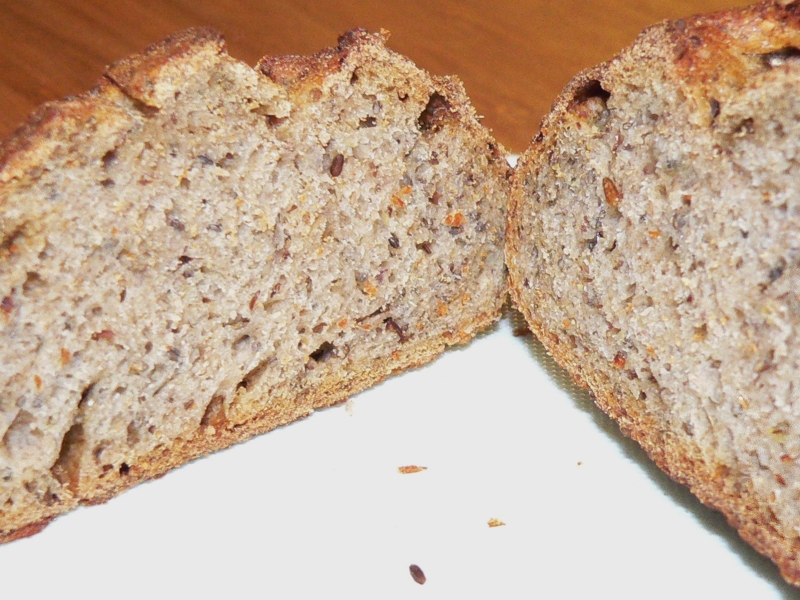 View of the crumb in the third and final loaf from this dough batch.

taste for my jaded palette ;-)

Now, the big question for me is just what do I want to mix today?

What a lovely combination and lovely breads!

Now, I will have to see how to work your banana bread into to another loaf LOL

Very interesting breads and a nice pictorial series on creating them.

and thank you for the kind words :-)

Great pictures too. They sure look nice and crunchy, and delicious, with moist interiors. I like the close up of the second loaf's crust in particular (and crumb). That could be framed as a painting, with it's soft focus, it reminds me of a painting. It is beautiful. Ray

The crust would would have been interesting to paint, but I ate it all.  ;-) I have posted a few paintings over the years (watercolor art) http://www.ronray.us  and close to 1,100 more at a 2nd site (fractal art) http://yarnor.deviantart.com/gallery/  but none of the art works tasted as good as that crust did ... LOL

Thank you for sharing your paintings with us. I am deeply impressed. What talent. I like the watercolors, they are so precise and fragile looking. I can see the breads are an extension of your painting talent. When I first saw the crust picture I commented on, I thought this could be an actual painting. While it turns out it wasn't, I see now it could have been.  Ray

I fear my breads will never equal the artistic mastery that I see so often being posted by members of TFL. This group has some truely artistic masters of artisan baking.