Well, I'm not suggesting putting rye flour into your macaron batter, although that could be interesting for savoury macarons...if such a crazy thing as a "savoury macaron" exists... Let's do the rye thing first and then look at the macarons afterwards.

This week I've been playing around with a very simple recipe for a 40% rye. I wanted a formula that I could mix and bulk ferment in the afternoon/early evening, and then bake straight out of the fridge, first thing next morning. I also wanted a bread with a subtle, pleasing rye taste - nothing overtly sour or aggressive on my plate, thank you very much. So after some fiddling around, I ended up with this recipe. 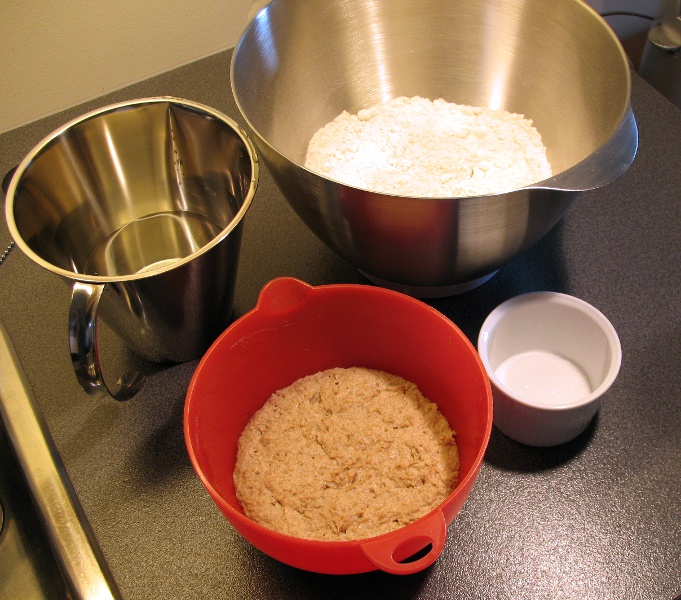 The modest 72% overall hydration makes this dough easy to work with, and shaping is straightforward. The dough was noticeably gassy both during the fold and when it came time to preshape and shape. I'm not really sure if a fold is necessary for this kind of dough, but I still like to pull it out from the bowl, place it on the table and feel its consistency. I ended up with simply degassing it lightly, and then stretching the sides ever so carefully before folding the sides up as usual. Make sure you don't tear or rip the dough - the rye flour makes this kind of dough a bit tough and not particularly extensible. 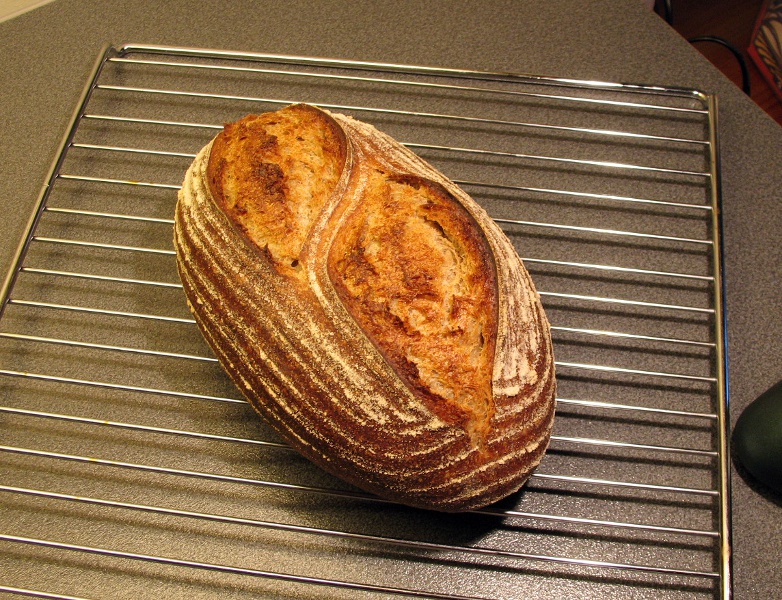 And here's the crumb shot (from a little later in the day): 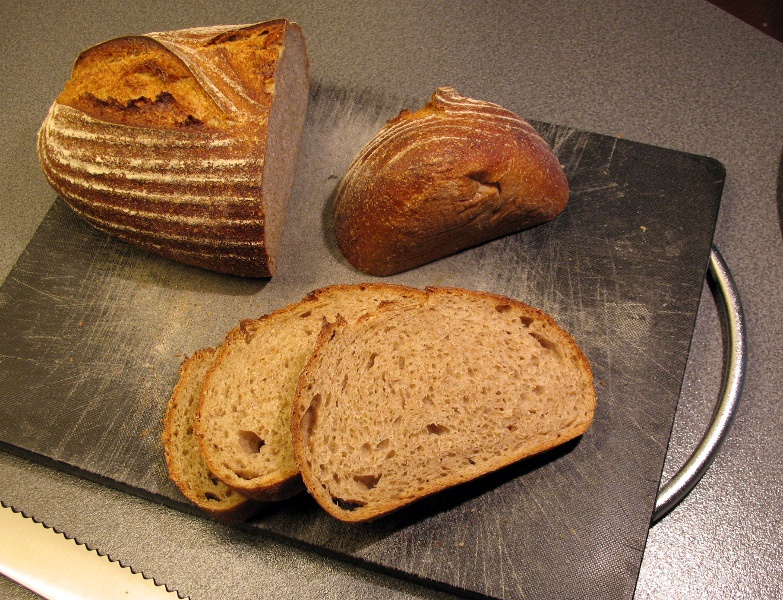 The formula yielded a bread that was pretty much as I expected it would be: Delicate rye flavour, hints of rye sour and a rather light crumb. The crust packs much flavour on its own, and it even had clear signs of crackles along the sides of it. I've been enjoying a couple of these loaves with sausages and smoked salmon all week long.

Now, for the (as advertised) macaron part. Macarons is a great way to get rid of leftover egg whites (should you have any). The batter is merely whites, sugar (powdered and granulated) and almond meal. There's no such thing as almond meal around here, so I had to buy whole almonds, blanch them, grind them and then process until a very fine consistency together with powdered sugar. I'm not sure if grinding fresh almonds yields a better macaron, but it took me over an hour to produce that almond meal... better be worth it... better be worth it...

To some, there are two things that require all the stars to be perfectly aligned to get right (not to mention the humidity, temperature and performing several sacrificial ceremonies): Starting a sourdough culture from scratch and getting the macaron batter to the right "flowing like lava" consistency...

There seems to be (at least) two schools re: macaron making, depending mainly on what kind of meringue the batter is prepared with. Most internet sources and textbooks (including ABAP), settle for a simple French meringue. Non-compromising, hardcore macaron aficionados never settle for anything less than a full Italian meringue. The Italian meringue is supposed to give more consistent results, less lopsided feet, no cracked shells, a batter less prone to overmixing and shells that can be baked immediately (as opposed to the French meringue ones, which benefit from at least 20 mins. rest between piping and baking, in order to produce a firm shell). It is also claimed that success with the French meringue method hinges on using either aged egg whites or egg white powder. Phew. Such a simple, straightforward list of ingredients and then these detailed, scientific instructions, no wonder the stars need to be aligned to get these guys right.

I had enough egg whites over to try two batches, so I decided to make one with a French meringue and one with an Italian. Some remarks: 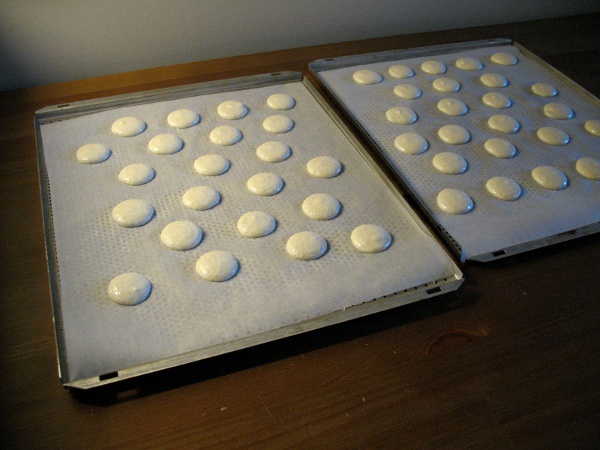 I'm not sure how to explain it, other than either blind luck or being blessed with a macaron-friendly oven, but both batches had close to 100% success rate. Of approx. 40 shells in either batch, only one or two came out with lopsided feet. No cracks. I couldn't believe it.

Of the two recipes, I was most pleased with the one with the French meringue method. I think that baking at 180C produced a better interior body in those macarons than those that were baked at 160C. Some of the latter had air pockets close to the top shell, whereas the first ones had a full, lovely chewy body. I bet the Italian meringue macarons, baked at 180C, would've produced equally good interior bodies in the shells. I also feel that baking with the door slighly ajar produced a more even heat in the oven, at least a more even colouration was noticeable. 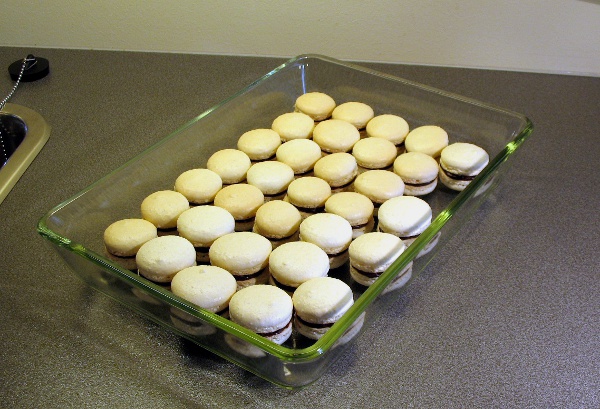 The macarons were filled with a dark chocolate ganache (with a hint of Grand Marnier thrown in for good measure). 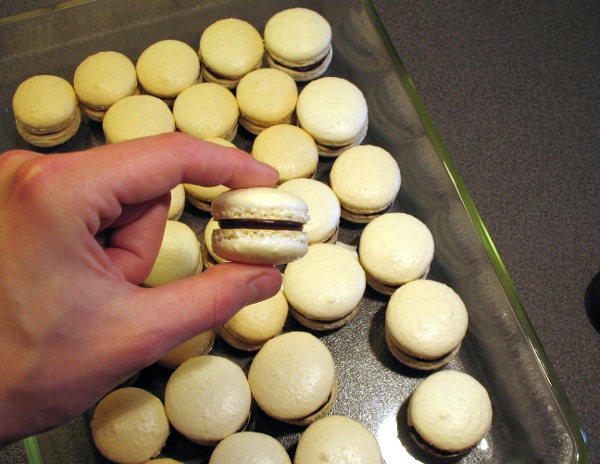 Lovely!  I see you used wafers under the macarons.  Lovely!

The rye looks so light weight!  Beautiful slash and colour!

Your rye bread is up to the usual incredible high standards; the cutting clearly maximises the volume in the loaf.

loaf and macarons.  I'll have to try your recipe for the rye - I've been tinkering with whole grains with some successes and some edible failures, yours looks perfect for ham sandwiches!  The macarons are tempting, especially since they cost a small fortune in the "designer" bake shops.

Very nicely done on both fronts. I've been thinking of what kind of medium rye I should make for a friend who has a father from Germany staying with them. This looks like a good bread that everyone would like.

Your Macaroons are so precise and artfully complete. I envy your skill hansjoakim.

Both the rye and the macarons!  You are a one man bake shop Hans!

Both the rye and the macarons.

I've never retarded rye loaves. It's nice to know it can work.

Thanks for your rye formula, Hans.  The bread is lovely and I really like the timing involved.  What's the recommended oven temperature?

Let me preface by saying thanks so much to you all for the nice compliments!

Daisy: Hehe... yeah, I'm not sure if I'd want rye in my macaron. Rye and all that sugar... perhaps the world's not ready yet? ;) I've read about those "savoury" macarons of PH, but calling them "savoury" because of the filling is... I don't know... taking it a bit far? I see how you can use e.g. puff pastry for sweet and savoury applications, but macarons somehow don't strike me as a dinner-table centerpiece. At least not as centerpiece of the main course... ;) Still, they're dangerously addictive. Have a go at them! :)

You haven't had Lebkuchen yet?  Honey and Rye and eggs and sugar.  I can picture rye macarons.   You not?

Hans Joakim, whenever I see your productions I almost fall off the chair. This time it's no exception.

If you want a much quicker way to enjoy almonds you can try the typical sicilian almond biscuits made with the same ingredients: ground almonds, sugar and egg whites. They are ready in a matter of minutes and they are absolutely my preferred cake ever. Nothing compares with them as far as I'm concerned.

I only disagree with your qualification of rye as "aggressive", but it's only a matter of taste ;-)

The macarons are so pretty and the rye loaf is gorgeous.  I have been trying to get around to making some and even bought a quart of eggs whites.  Usually I just take the white from a fresh eggs.  I've really been in a meringue mood lately...I love it in all forms!