I have been working on Sam Fromartz's mixed yeast and levain, long ferment method for baguettes. I know Hamelman prefers the poolish preferment method and I have to say I like the aroma that comes off the poolish better than almost anything. So, I decided early this morning to start the poolish and spent the day rereading the chapters on preferment of yeasted breads in Bread.

Along the way, I read over a sentence I had no doubt seen several times in the past, concerning steaming and baking on Page 100. Here in plain common words I discovered something I don't recall ever seeing before that I think is going to change my breads for the better. Hamelman is saying that for the home baker, after the steam period, the door can be propped open with a spoon for the remainder of the bake to help give a crisp crust in the drying phase of the bake. I have turned the oven off and left the bread in the oven at the end of baking to crisp the crust and make it slightly thicker and easier to cut after cool down. But never have I had the door propped open for 18 minutes. Right out of the oven the crust is hard and well colored. Now that it has cooled and been cut, I'm a little surprised that it's more open. The crumb is airy but not the dense crumb with many larger size holes. This is more like foam with a few larger holes. Honestly, I'm not sure why at this point. I'll have to think on it over night as it's already past my bed time. :>) I think I like the flavor better with these over the long refrigerated ferment. I still have another 700g of dough in the fridge I saved to bake Saturday so we'll see how that is after the overnight.
Eric 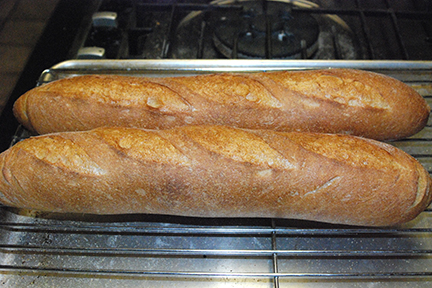 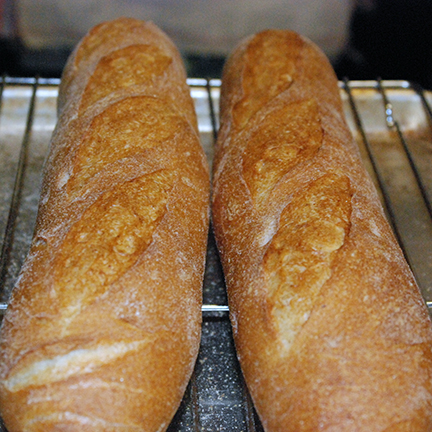 The loaf on the left got 4 slashes and looks a little over proofed at 1-1/2 hours to me. 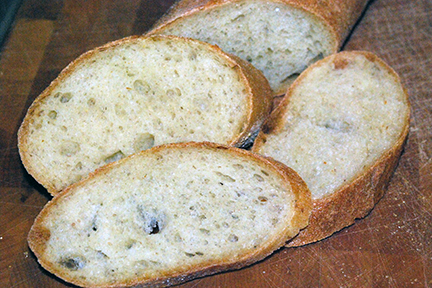 Not quite as open as I like but good for brochette.

I love the even color and the height you get. My baguettes have been a little flat lately. Very nice Eric.

Thanks WH for your kind words. I do like the color but I wasn't thrilled at the crumb structure. I'm hoping someone can tell me how I can improve the irregularity of the holes. The loaf is nice and light but it's as if the bubbles didn't combine and stayed small and independent from each other. The dough temperature was 75F and proof time was 1-1/2 hours so I let it expand well enough. It's a mystery to me.

They look very delicious! On my (admittedly, terribly long) to-do list of breads to bake!

On a side note,Eric: I am anxiously awaiting my shipment from flourgirl-and am happy to report that a few friends of mine are super excited about ordering from her, too. Thanks so much for including that info in your Horst Bandel post...

I appreciate your kind words. I have always felt that being able to make passable French bread is a skill that every baker should aspire to. For such a simple bread formula it turns out to be challenging to get it right. I'm learning at a fast pace as I continue my focus on ways to create this wonderful bread.

You are going to love the fresh ground flour from flourgirl51 (Organic Wheat Products). Rhonda is setting the bar high in her quest to produce the best tasting wheat and rye flours money can buy (not much money at that).  It's great to be able to support her efforts to work in the Organic food chain, and she is one of our own.

I agree with you about it being vital to know how to make good French Bread. When I still lived in Germany I managed to make some Baguettes that were delicious, but my one try here in the US was so terrible that I never tried again.BUT having found this site, I will embark on Baguettes soon enough-am trying Ciabatta and Foccacias today and am apprehensive.

Wishing you a happy Sunday,

Your new shipment of flour if you haven't tried any from flourgirl51. Eric hooked me up with her too. Until I get a grain mill that will be my only flour. It's fantastic! The flours are sweet, fresh, very coarse but yet the whole wheat seems to act like it has a lot of gluten and the rye is just amazing.

She also has rye chops and meal, which I didn't know until recently. I also get spelt and durum from her. I love adding the durum to pizza dough and the spelt to almost anything. Try it in homemade crackers or one of the spelt sourdough recipes.

...both here and in your 2 Fromartz postings. Enjoyed the reading and pics.

The Fromartz series with different flours looks like it was fun.

Thanks, it was fun. I think it's always interesting and informative to see what occurs when you change a single factor in a recipe. Most of us I think, are curious about French flours, wondering if our bread would improve if only we had access to the wonderful European flours. What I seem to be learning is that there are differences but most of the things that matter can be overcome with good technique.

Could you mix some flours to get closer to a french? Perhaps mixing cake, AP or even using a cheaper AP flour would become closer to equivalent french flours? Are they lower in glutens?

I guess, you could aways ship 5lbs from France and give it a try, see how much difference there is.

Isn't it baffling when you think you've done everything right and the bread looks great from the outside, but when you slice into it, the crumb's not quite what you expected?

I've been having my share of head-desks on that issue of late.  So now I'm thinking twice about every step and take solace in a comment by Hamelman in Bread:

"...each day we have the opportunity to redeem the setbacks of yesterday."

Yes, some days it seems I have forgotten most of what I have learned.

Just about the time you were making your baguettes, I was making the Sam Fromartz recipe, which I have made many times and love it.  It takes me a long time to post and share pictures.  Fromartz uses only 10g w/w, I try to make it more multigrain and this time used 25g w/w and 25g rye.  The crumb was probably not as open as yours, but very delicious.  I have 1/2 loaf in the freezer.  I will try to get a crumb shot.  I am very happy with the looks and taste of these baguettes.  I have to try the poolish method next.   Salma

Very nice salma. I like the way your cuts open just the way they are supposed to. The addition of more whole grains must make these more flavorful and interesting as a bread. While not traditional, I'd bet the taste is terrific. Thanks for sharing.

Your baguettes look terrific to me. I wish I could make them like that. Mine don't have much color and tend to be flat on the bottom. For the color did you bake with steam for 6 minutes then with the door for 18 min? Where did you put the spoon? at the topof the door, the bottom or where?