I've never had really good Greek bread. But, I have heard enough about how great it is that I've been interested in working on it for some time. When dsnyder and I were discussing the formula a while back, he let on he has a daughter-in-law from Greece and maybe she would help tune this up to a respectable loaf.

Here is Davids posting of the improved version, after experimenting with his DIL.

I followed Davids suggestions except for the mixing and folding. I mixed in my DLX after a 30 minute rest, for a total of 3 minutes, using the roller. Then I folded it 3 times in a bowl over the next 3 hours as it fermented. It was a silky smooth dough, very nice to handle. After dividing in two and pre shaping, I tightened the boules and placed them in linen lined baskets for proofing. It took 1-1/2 hours for the proof and the dough temp was 74F.

I also added a few drops of toasted sesame oil to the dough, hoping to get some of that great aroma and boost the lightly toasted seeds on the surface. I'm afraid I would say the desired effect of the oil was not realized. There is a definate sesame aroma but I think it's from the seeds.

After reading Davids comments about his oven temperature and the brown color he got, I thought I would start with 430F and reduce to 410 when I rotated the loaves. The crust color isn't as dark as it appears. I like the color but I also think it could be a little more golden and less orange/brown. A lower and slower bake perhaps.

There is a little bitterness in the taste I'm not sure about. I don't have a lot of experience with Durum flour. Does anyone know if that is normal with Durum?  My daughter was bugging me to cut it so after 20 minutes I relented and had her carve it up. There isn't a hint of sweetness, with 2 T of honey, I'm a little surprised. 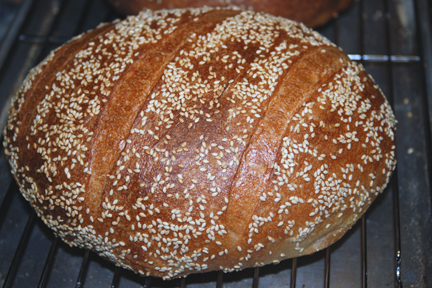 My son's best friend's family are Greek.  We have very good Greek friends here in Brisbane.   I saw them yesterday, and my son's friend's grand-pa said Happy New Year to me.   I was just wondering which New Year he meant, the Western New Year or the Chinese New Year that is coming up, then he said, in Greek tradition, they celebrate it for 40 days!

With the bitterness you tasted, I am afraid to say that I am not a fan of Durum flour precisely because of that.  The bitter note comes from Durum flour.  I may be wrong but I think you rarely see a French bakery use Durum flour in any big way.  And two tablespoons of honey were not much at all; they would be very happily garbled up by the yeasts and all that you would taste in your bread is sourness, not sweetness!  My experience with sourdough baking is that any amount of sweetness that you dare to put in (without going into the sweet category of panettone and the like) would just make the levain bread taste more sour!! Weird, isn't it.   (You might ask what about Chocolate Sourdough?  Well, the sweetness to me is in the actual chocolate bits, not so much in the crumb.)

Did you put those on with a wash, or was that what you used the sesame oil for?  I think I misunderstood what you meant there.

I understand your point about the crust color.  I'm struggling with that in my own baking, along with other issues.  These have a nice rich, if not particularly dark, coloring though.  Very attractive indeed.  Nice job!

The loaves look beautiful but it sounds like you your not thrilled with the taste. I've used Durum a lot of times but I've never tasted bitter. Maybe it's just my taster but I love the flavor it gives to bread.

How did your daughter like the taste? Will you make these again?

I'm sure you are right about the Durum being the source for the bitter taste. It isn't prominent but to me it detracts from the over all flavor. Perhaps it is an acquired taste one gets used to. So many people have written about how wonderful the Greek Country bread is, I have a hard time believing it has a bitter after taste. It looks so beautiful. Thanks for your encouragement.

Thank you for your kind words. They did color up nicely. After proofing, I brushed off the dough while on the peel and blew off the last bit of flour and spritzed heavily the top surface. After sprinkling the seeds on I quickly patted them in place and scored.

The sesame oil was added as a flavor enhancement along with the olive oil. I think I need a better grade of Sesame oil and maybe more of it.

I bake several of my favorite loaves with duram flour and have always thought it added a wonderful flavor...more like buttery.  How much sesame seed oil did you add?  Is it still fresh?  Sesame seeds can go rancid very quick.  I use a mild sesame seed oil when cooking only a few drops as the flavor on my taste buds can be strong and bitter if I use to much.  For what it's worth I keep my seeds and oil refrigerated.  Added-  Duram is most popular in Italian/Greek breads.  They grow wonderful Duram wheat.  Like Shiao-Ping says I don't think you will see it used in French baking.

Thank you for waking me up. My seed and oil are both old although the seeds were from an unopened bag from Penzies.

My Durum is fresh milled from flourgirl51 so that's out of the equation. I tasted the seeds and they seem OK. Maybe it was my oil that caused the bitterness. I've never used this oil in bread before and never tasted the bitterness before.

I'm glad you tried this, but I'm sorry you were disappointed in the flavor.

My loaves had no bitterness and did have a definite sweet flavor. I really don't think the bitterness was from the Durum flour, unless it was really old. I agree with Sylvia's hypothesis that it was the sesame oil. Sesame oil becomes rancid faster than any other oil I know of. Smell yours or taste a drop and see what you think. If it was starting to spoil, the bitterness might have masked the sweetness from the honey.

You know, now that I think of it the sesame seeds are from a bag I have had for at least 6 Months also. The oil wasn't that old but who knows how long it has been around. These are both things I can fix thankfully. I'll try again.

My sesame seeds keep quite a long time in the freezer.  I take them directly from the freezer to use.  Always give a good sniff of your nuts and seeds if they don't have a lovely good smell any other smell will be rancid..same with oils and flours...soon you'll be able to pick up the lest bit of rancid smell, then you want to toss it!