After several not-so-happy outcomes, and one pleasing outcome, it was obvious that I needed to get better acquainted with the South African flours that I have.  Previous bakes seemed to indicate that the flours' absorbency was different than I was anticipating, based on my previous experience with U.S.-produced flours.  The only way to find out what was going on with any certainty was to do side-by-side bakes of identical breads, adjusting only one variable (hydration, in this case) at a time so that I could compare the outcomes.

For this bake, I decided to use a 50/50 mix of brown bread flour (protein content in the 12%-12.5% range) and bread flour (protein content in the 11.5%-12% range).  Although the label isn't altogether clear, I think that the brown bread flour is either whole wheat, or possibly de-germed wheat.  It contains large particles of bran.  Note that the same miller also produces a "Nutty Wheat" flour that they describe as white flour with the bran mixed back in.  I used 2% salt and 1.6% yeast (IDY).  Hydration levels ranged from 55% to 80%, in 5% increments.  Each dough contained 100g flour, to make the math easy.  (It also makes a pretty decent size roll for sandwiches.)  The dry ingredients for all of the doughs were premixed in one batch, then weighed out for individual mixing with the selected quantity of water.  These are straight, lean doughs; no preferments or enrichments were used.  This was to eliminate the potential for other ingredients masking the effects of differing levels of hydration.  Autolyse was not used for any of the doughs.  All mixing was by hand.  No bench flour or water was used.  Room temperature was 75ºF-77ºF.  The temperatures of the ingredients and the finished doughs were not measured but are assumed to be within 3ºF-5ºF of room temperature. The water came straight from the tap, compliments of the City of Pretoria.  All doughs were fermented on a lightly oiled granite countertop and covered with oiled plastic wrap.  Each was preshaped after the bulk ferment, then given 15-20 minutes to rest before final shaping.  Breads were baked for 25 minutes on a sheet pan in a 400ºF oven, with light steam.

Observations are as follows:

55% hydration - this dough was very stiff and did not want to come together in the bowl.  The dough was dumped out on the countertop to finish mixing/kneading.  All flour was incorporated and after several minutes of kneading, the dough smoothed out and became pliable with almost no tackiness.  This dough was the slowest to rise.  Due to an interruption in the process, this dough had approximately 2 hours of bulk fermentation and barely doubled in that time.  The finished bread was the smallest of any in this test bake, having risen less after shaping even though it had the longest final fermentation duration.  The crust was thick, hard, and tough; the crumb very tight and dense and slightly gummy, even though the bread was thoroughly cooled before slicing.

60% hydration -  This dough was also somewhat stiff, although it was fully mixed in the bowl, unlike the 55% dough.  Pliability was better than the 55% dough and the dough was just slightly tacky at the conclusion of kneading.  The bulk ferment was slightly less than 2 hours and the dough was a bit more than doubled in that time.  The finished bread was only slightly larger than the 55% hydration bread, exhibiting a similarly hard/tough crust and dense crumb.  However, the crumb was not gummy in the finished bread.

65% hydration - Early in the mix, this dough was sticky, although that improved to being moderately tacky by the end of kneading.  The dough cleaned the bowl with all flour being absorbed.  The bulk ferment was approximately 1:20 and the dough inflated to about 2.5 times its original volume in that period.  The finished bread still has a tight crumb, but the crust is thinner and less resistant to cutting.  Size is slightly larger than the two preceding breads.

70% hydration - This dough was noticeably stickier during mixing and kneading than the previous doughs.  It did clean the bowl during mixing.  I wound up using a combination of standard kneading and stretch and fold to manage this dough (not easy with such a small sample).  I don't think it would have come together without the stretch and fold technique.  At the end of kneading, it was still more sticky than tacky, with some sticking to my fingers.  It had about a 1 hour bulk ferment, during which time it nearly trebled in volume.  This bread also rose more after shaping, and was significantly larger in volume than the preceding breads (and, consequently, felt "lighter" because of the reduced density).  The crumb was the most open of any the breads made to this point.

Intermission - a co-worker stopped by to drop off some things just as I was finishing kneading the 70% hydration dough.  That inserted about an hour's delay between the 70% dough and starting the 75% dough.  All of the first four doughs were baked on the same sheet pan at the same time.  The last two doughs were baked on a separate sheet pan.

75% hydration - This dough never stopped being sticky.  It did not entirely clean the mixing bowl.  Standard kneading techniques were not working, so I switched to using the French Fold.  Kind of a challenge with such a small quantity of dough.  This bulk proofed about 45-50 minutes, easily doubling in that time.  Slashing before baking was problematic because of the dough's stickiness.  The finished bread was larger than its predecessors, felt "lighter" still, had a thinner crust and a more open crumb.

80% hydration - This was an extremely sticky dough.  It had to be scraped out of the bowl after mixing and repeatedly scraped from the bench while kneading.  The only kneading technique that worked was the French Fold method.  Even that took several minutes (not several cycles) before the dough started to exhibit some structure.  This dough expanded the fastest during the bulk ferment and grew the largest after shaping, even though it had the shortest times in both ferments.  The knife dragged a trench in the dough, but did not actually slash it.  The finished bread had the thinnest crust and most open crumb of any of the breads in this test bake.

1. One of the notions going into this test was that the city water might be a culprit in some of the former bakes.  Based on the results of this test bake, I think I can get good bread using city water, without going to the effort of running a similar test using bottled water.

2. For this blend of these particular flours, a hydration of approximately 70% seems to offer the best dough handling traits and a pleasing finished bread.

3. None of the doughs experienced much oven-spring.  I would attribute that to handling during shaping that was not gentle enough (too much degassing) and to baking on a cold sheet instead of on a hot stone.

4. It appears that the jury is still out on my starter.  Most (not all) of the previous bakes that experienced problems were sourdoughs, rather than yeasted breads.  This starter may be too acidic or too enzymatically active, either of which might be leading to gluten attack.  I'll see how it behaves after a few days of rye feedings.

6. Weather today was mostly sunny, with outdoor temperatures nearing 80ºF while I was running this test.  I didn't think to check the relative humidity while running the test.  It's now 47% at 75ºF, about 7 hours after starting the test.

7. Since this is a whole wheat blend, I'll be interested to see whether I can get better results at either the 65% or 70% hydration levels by utilizing an autolyse step in the process. 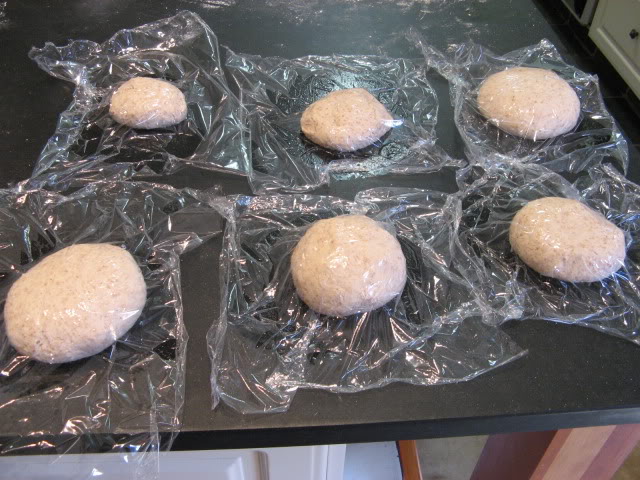 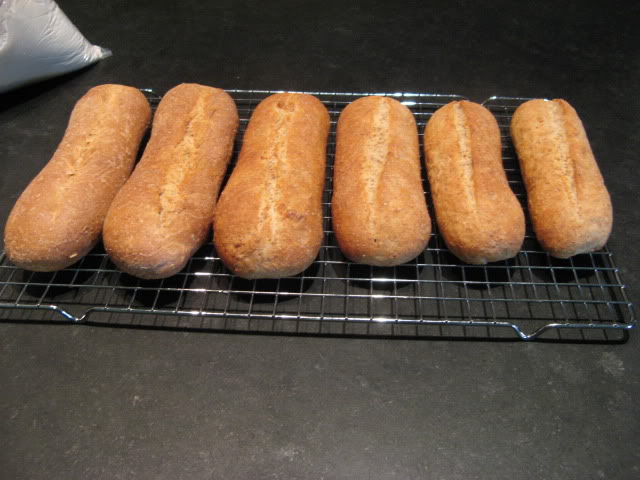 Right to left, finished breads, lowest (55%) to highest (80%) hydration.  Note that these were initially shaped to be the same size.  Growth occurred during final proof and baking. 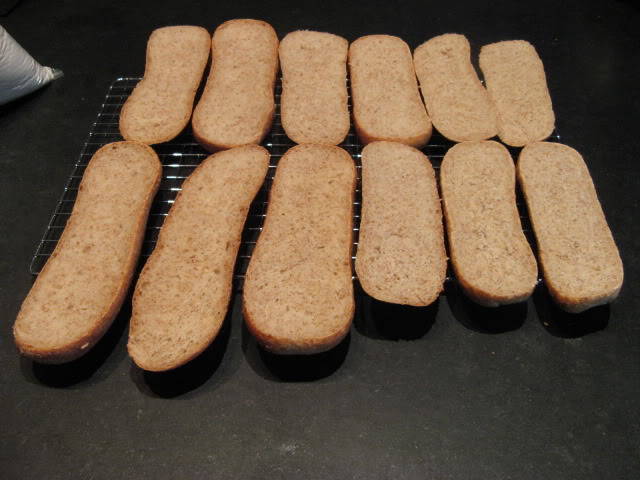 Crumb of, right to left, lowest (55%) to highest (80%) hydration.  I think the crumb of the three higher hydration breads (70%, 75% and 80%) ought to have been more open than this.  That they aren't is probably an indication that I was too forceful during shaping and degassed the breads too much.  An autolyse step might also help.

That's today's effort.  It's one datum, not a trend, but I can use it as a benchmark for future bakes for gauging how much hydration is required and to make some educated guesses about the effects of added fats or sweeteners for enriched doughs.  Now I suppose I should do something similar for panned breads...

That your best take was 70% hydration which is approximately the hydration I like for my "high extraction flour" bread.  (I checked my records and my current formula is at 72%)

One would suppose that doing such small samples will have impact on the end result (there has been some discussion that certain breads only reach full potential at certain sizes) but at least you have a good starting point.  I would worry less about degassing during shaping than getting fermentation correct (unless you are treating your dough like a stress ball) and this may simply correct itself at larger volumes.  Another thing you may wish to consider is dropping the yeast percentage a bit.  When I use commercial yeast, I have gotten my best results with 1% or slightly less.

Coming to you from somewhere near the East China Sea...

It doesn't surprise that higher hydrations ferment faster.  What that basic observation tells me is that the lower moisture doughs need more time to ferment before they go into the oven, porportionally.  Sounds like a diagonal line on a graph to me, as hydration goes up, the fermenting time shortens.  Taking in the crumb.... which was the best for you?

Might be interesting to test how long the dough takes to rise to "ready to bake" with each hydration.  Try smaller amounts like something you could bake in coffee cups.  When the dough reaches the edge of the cup...into the oven!  Then compare the hydration in the crumb to find your ideal.