It takes a village to raise a Pan D'oro... the village is all the people who impart their knowledge and encouragement here at the  Fresh Loaf and out in the blogosphere.  I really want to thank Susan@ Wild Yeast for her step by step directions and formula , MC@Farine and Foolishpoolish and many more for sharing their experience and inspiring baking blogs....without them i would still be making quick breads.

Pan D'oro, or bread of gold, and it's cousin Panetonne, have a long history in Italy dating back to when ancient Romans sweetened a type of leavened bread with honey. In Italy and France, the panettone comes with an often varied history, but one that invariably states that its birthplace is in Milan (Wikipedia) Throughout the ages this "tall, leavened fruitcake" makes cameo appearances in the arts: it is shown in a sixteenth century painting. The Pan D'oro is, by any stretch of the imagination, not a quick bread. It takes time and patience, but what it really takes to raise a Pandoro is millions and millions of beasties that make up the strong sweet starter. I also found an interesting scientific explanation of the whole fermentation process here and time table that I will read when I have some time. I have seen pictures of Lievito naturale legato or bound sourdough and it still remained a mystery. I basically used a 100gr starter-50w-100f with a 4 hour refreshment cycle at 85* and it worked just fine. 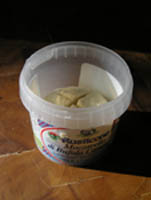 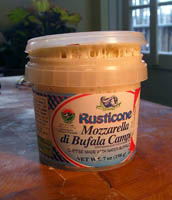 Another important consideration is the temperature of the Lievito naturale during fermentation... a whopping 85*, it being winter in the North East and my house hovering around 62-65*(by choice). I would have to fall back on the old pot holder trick (3 folded pot holders=76*) in the stove door with the light on. It works in a pinch but, I always run into this problem of proofing temperature. In the summer it is too hot (I can't bake or i have to use ice water baths) and in the winter it is too cold. I've been tooling around with many ideas on how to make a proofer work... a small car refrigerator/cooler or wine vault for the summer and a heater/light bulb for the winter. The Pan D'oro made it happen. I turned again to the internet village bakers and found a design for a proofer that Steve@Bread cetera posted @Fresh Loaf, and I took it a step further. I went looking for a thermostat for reptiles.... ended up at Craigs list with the perfect solution... a Ranco ETC microprocessor =based temperature controller thermostat that plugs into the heating unit or refrigeration system. It really takes the prize and i got it for a good price from a home brewer who started making babies and his wife made him stop making suds. 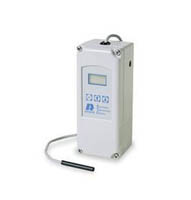 So I now have a proofer in my insulated pantry cabinet that i can set at any temperature and forget about. Well almost... you have to remember the basics: set your timer and remember what temperature you set it at last! 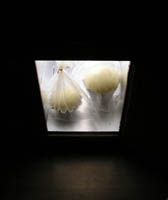 Well.. can you tell what is coming? I crawled into bed about 1 o'clock after making chocolate biscotti, a batch of sour dough challah, stollen and got the Pan D'oro tucked away for it's final rise. It took me a minute to fall asleep but I woke up startled from a dream of sugar plum fairies way too early! I lay in bed thinking I had till noon before I would have to bake them off... and then it hit me..."Oh S***t...I left the proofer set at 85*!" I ran down the stairs and opened the door to the proofer and just laughed when i saw the dough going way over the top of the mold. I quickly turned on the stove to pre-heat and made some coffee. The overflow problem was two fold. When I went on line to see how much dough my Italian mold would take, I made an incorrect assumption. The smaller Portuguese molds takes 500gr. so I thought for that for this big mold, 1000grs did not seen out of line. Wrong. But it was a mistake that could be easily fixed and no one would know  (and Sara and I got to taste what I had to cut away.) I must say.... the stollen and the Pan D'oro were the exclamation points to a delicious Christmas Day dinner at Rick and Rita's. (Folks liked the Challah and the double-dipped chocolate biscotti too. )   Hapy New Year to all. 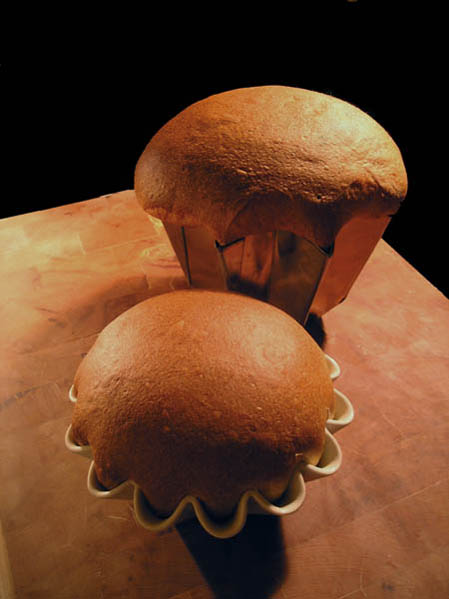 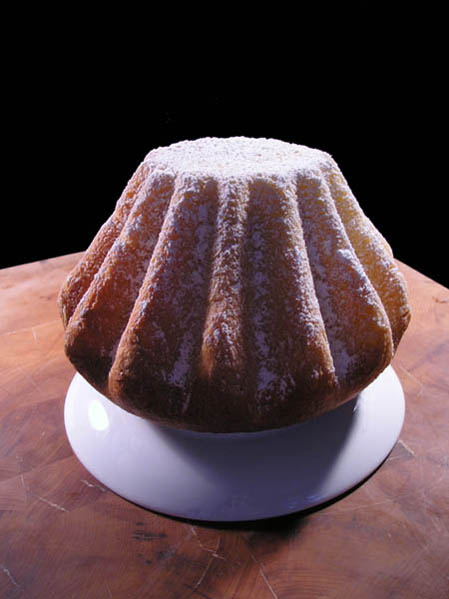 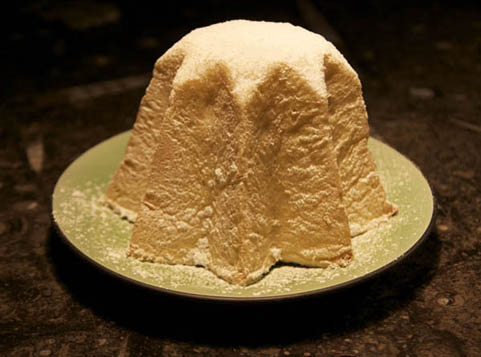 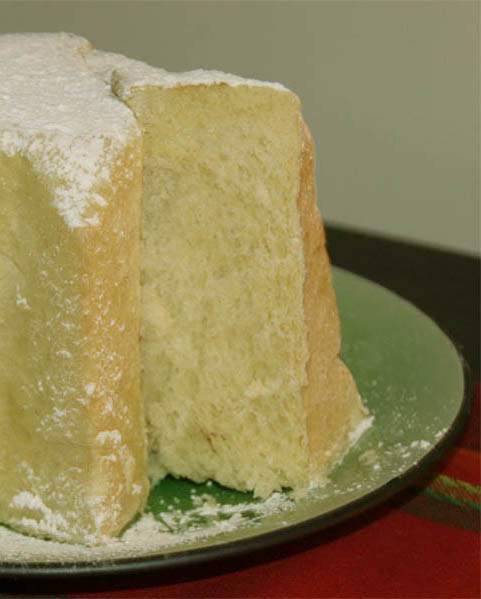 I am submitting this to Susan@Yeastspotting

I've never had Pan D'Oro, but the crust and crumb shots speak for themselves.

Like Betty says, I never have tasted it either but I can tell I'm really missing out!

that melts on your tongue...

Congratulations, Judd, both on the breads and on the post! I love it... You (and your breads) must have been the star of the party. I have to point the Man to this other type of thermostat. Sounds really efficient...

Those are some beautiful pandoros. As someone who's goign through the same process, I am smiling reading about your proofing effort. I am trying again thsi weekend, hopefully with better luck during the mixing stage.

Gorgeous! I've had semi-success with a reptile thermostat, but yours sounds like it really works well. I'm glad you caught the pandoro in time. I'm not surprised it was the hit of the dinner!

It was really touch and go...it started to sag over  the rim...

Happy New Year to you too!

Your crumb looks as light as cotton candy. The one on the bowl looks almost like it's glowing, as if the light is passing through it. Very nice!

Thank you Debra...the Brioche pan worked out well in a pinch (not so good for the Panettone because the glaze flowed down around the rim) ...for the first try I lucked out! The crumb was amazing...really melted on your tongue! I have to admit...I just made a Panettone for New Years and I think the Pandoro wins my taste test hands down..

Very nice, but what recipe did you use? Did you do the folded version (with butter, like for croissants) or unfolded one?

This year I baked 3 different versions of pandoro, both folded and unfolded, and fortunately my 100% sourdough was always enough to raise perfectly the dough, I never needed the firm levain ;) (I don't particularly love it).

I used the unfolded method.The recipe came form SFBI via Wild Yeast ,MC@ Farine and Foolishpoolish(she does it without additional yeast and hand mixes..I am going to try that next time) You can find links above in text. You can convert your 100% to a sweet stiff very easily with in a couple of feedings.....I started my levain saga with 100% and then to a 60% and i go back and forth...It gives me confidence when you see the 60% rise and fill the container...