It just wouldn't be Christmas at my house, without Ribbon Cookies. I grew up with these, as did my mother and grandmother. When I asked my grandmother if she knew where the recipe originated, she didn't, but we know she is mainly of Dutch descent, and she remembered both her mother and grandmother making them before her. That makes five generations that we can account for, including my sisters and me---six, if my niece carries on the tradition. My grandmother had two sisters, and so my cousins all make them.... and friends and neighbors.... and now coworkers too. It isn't a closely guarded family secret, by any means; it has always been given freely. And it has always been much requested.

See how pretty they are on a Christmas cookie tray. And they taste both as good, and as unique as they look. It's fun to bring them to holiday get-togethers, because people are generally stumped by the stripes. They always want to know, how did I do that? But it's not a feat of magic. It's so easy, a child can do it. I know, because I did growing up. 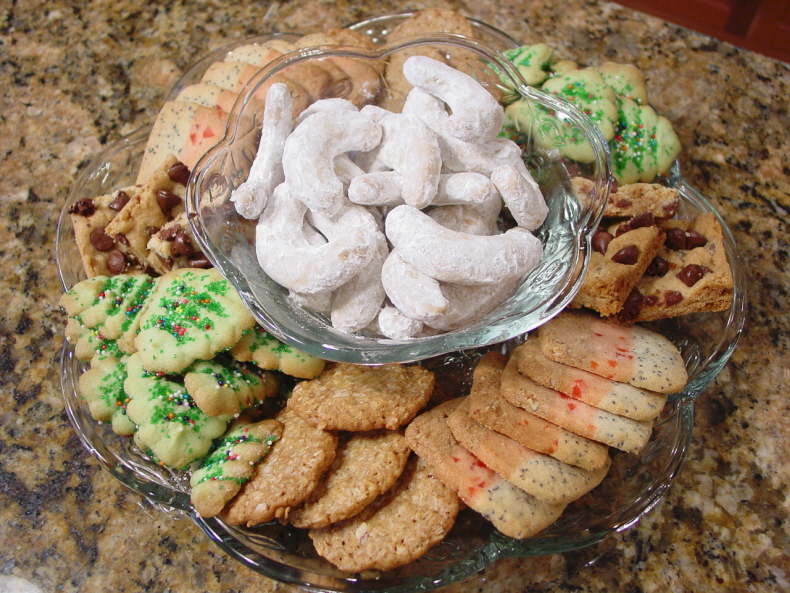 My grandmother passed away a few years ago, at the ripe old age of 95. While cleaning out her apartment, I found her hand-written recipe card, yellowed by time, that had become one with the plastic sleave she put it in long ago for protection. That was just like her. 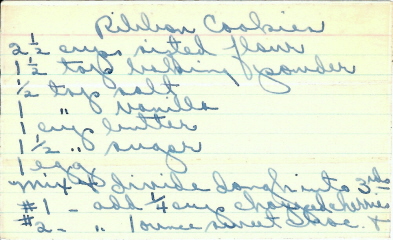 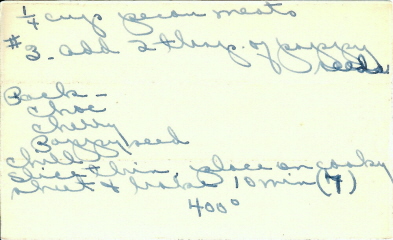 In case you can't read my grandmother's handwriting, here's my version:

Whisk together the flour, baking powder and salt. Set aside. Cream butter and sugar. Beat in the egg and vanilla. Stir in the flour mixture. 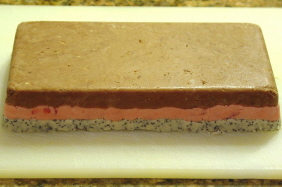 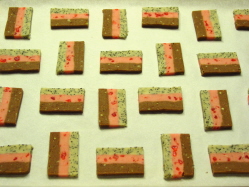 Remove dough from loaf pan and cut into thin slices (about 1/8 inch). Bake on greased or parchment-lined baking sheets about 10 minutes at 375ºF. Watch closely because they can burn fast, but they should be starting to color a little around the edges.

These cookies should be crispy when completely cool. If they're not, they may be sliced too thick, not baked long enough or oven is too hot (or not hot enough). Leave some space between them on the cookie sheets, because they grow quite a bit. I make my slices across the short side of the loaf (side to side) and then cut that in half for two medium-size cookies. One year I used unbleached flour and the cookies were not as light or crispy, so it's bleached for my Christmas cookie baking. I add a drop or two of red food coloring to the cherry dough now, because candied cherries aren't as deeply colored as they used to be. They just don't impart as much color to the dough. If you use unsalted butter, you might want to double the salt.

Thank you very much for sharing your family tradition of ribbon cookies and your Grandmothers recipe.  In what size pan did you pack the dough?  If I have enough energy left tomorrow I will make these lovely cookies.

Thanks Sylvia! I have edited my version in for you. The pan is a 9x5-inch loaf pan. I had to change the oven temp for myself, because I found 400 to be too hot. Oh, and one other thing---I add a drop or two of red food coloring to the cherry dough now, because candied cherries aren't as deeply colored as they used to be. They just don't impart as much color to the dough as good ole red dye #2. If you used unsalted butter, you might want to double the salt.

Thank you for the recipe version.  I buy bleached flour 'Pillsbury' and cake flour for my cake/cookie baking and this year when I looked at my bag of Philsbury I was surprised to see I had picked up a bag that read unbleached.  Since I make several pound cakes every year, I mixed about half cake and the unbleached Pillsbury together and the pound cakes turned out great...I have also made them with all cake flour with nice results.

What a delightful and colorful repast!

I'm going to have cookie guilt this Christmas, as I've no time to make any.  Only bread.  Going to be a breadful Christmas.  ;-)

Those are beautiful, Debra.  I hope you have a wonderful Christmas and thank you for sharing those with us.

lovely ribbon cookies, debra, and so festive.  that's what I call a labor of love!

Hey, thanks everyone, and Merry Christmas!  You too, Devin---I don't know what happened to your post, but I did get the email notification.

It wasn't the cookies that grabbed me..it was those precious recipe cards, handwritten by your grandmother. THAT is a treasure.