We spent yesterday taking our granddaughter Jewels to hear Mrs. Claus reading stories and her first visit with Santa. Being 17 months, she wasn't all that enthralled with the story time, but did enjoy marching around and having a great conversation with herself and whoever else wanted to listen. The babbling cracks me up, she is so expressive with her hands.

The holiday season brings those once a year baked goodies. I found a recipe for Guiness Stout Ginger Cake and wondered if it would be as wonderful as Qahtan's Guiness Stout Chocolate Cake. This bread is richly dark and the aroma is incredible. Tasting will have to wait until it has cooled. It has stout, molasses, fresh grated ginger, fresh grated nutmeg, cinnamon, cardomom, ground ginger, cloves. 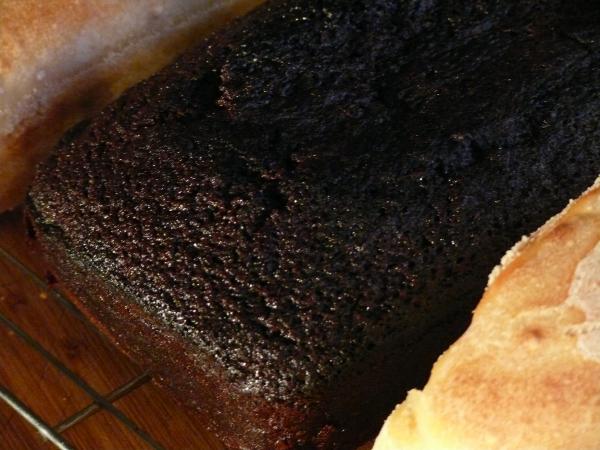 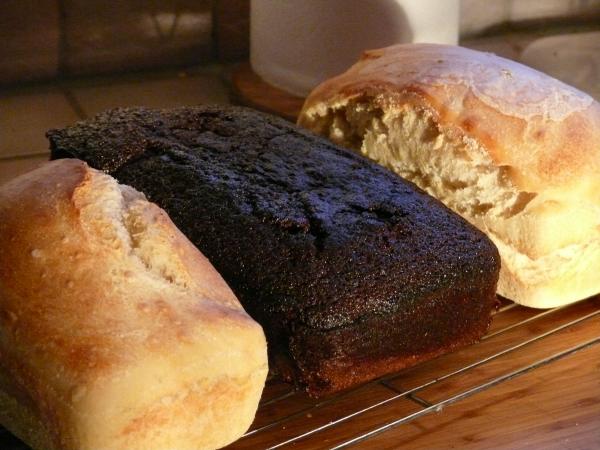 Would love to hear everyone's favorite once a year holiday bakes. I'll be baking off the requisite cranberry orange breads, our holiday fruitcake (this one is awesome, honest!) gingerbread popcorn and something new that you might suggest?

I have found that heating 1/4" hot water in a metal pan during the preheat gives me an oven full of steam by baking time, so much so that I have to be careful and keep my face away from the oven door when I open it to avoid getting a steam burn. Even after loading the oven, a few minutes later I see steam coming out the vent.

I recently tried the suggested method of pouring 3/4 cup hot water into a sheet pan that had been preheated with the oven. I thought even better was to use boiling water. Quite frankly, it seemed that I hardly had any steam compared to the way I had been doing it.

Does the temperature of the water poured into the pan make any difference? If I had used just hot water vs boiling would there have been more steam? It looked like it evaporated almost as fast as I poured it.

I do remember (I think) that someone said what was being produced was vapor not steam by most of these methods.

One caveat for all new bakers..If you have glass doors, be sure to cover with a dry towel when pouring water to avoid cracking the window.

Bread Fix: Not the best picture, blurrrry! Having been on vacation, I have gone without touching my sourdough starter for more than a month. Amazingly to me, with a few feedings we were back in business. I just went crazy,  sourdough bagels with the help of  Susan & Bill, sourdough waffles with  fresh strawberries & raspberries for Father’s Day breakfast with the kids, yeasted BBA’s Vienna bread and Multigrain Extraordinaire. I also made 2 carrot cakes..the first one I neglected to put the sugar in..can you imagine that?!  The sourdough bagel formula is awesome. Thank you susanfnp and  bwraith. Finally, a bagel that tastes like home. My attempt at a garlic bagel needs some work, but the cheese bagel was to die for. I was a little hesitant at caraway and fennel, but OMG I think that is my new fav. My husband looked a little skeptical at the sound of the combo, but he really liked it too! I always feel  like the seeded varieties are a waste of money, since most of the goods end up on the floor, counter, table, down your shirt, you know what I mean! And they are pricey! the seeds that is..  The kids had never had sourdough waffles and loved them. They had 2 belgian waffles each! They are so light..ethereal comes to mind as a descriptive word.  Vienna bread is a lovely soft creamy bread and the Multigrain, just darn good. It has that Mt. St. Helen's look, don't ya think?

As the Sourdough Rises

Thought someone out there would enjoy the soap opera of a sourdough newbie..LOL!
I have been studying the techniques of many mentors here..I had my notes on the long
proof of my starter,autolysing, folding & shaping, slack doughs, retarded rise..too many
facts for my feeble brain I fear!! I took my starter out Friday, poured out but 1/4 cup
and fed with 1/2 c flour & 1/2 cup H2O..a little later bubbling and very happy..into the
oven with the light on overnight..Saturday morning (12 hours later)slowing down..so I feed
& back into the oven. Sunday morning..I think I waited too long..still bubbling..but there
is hooch too. I mix my starter, yeast,milk,lemon juice & flour..cover and let sit 30 min.
Un oh..really stiff so I add a bit of H2O..way too sticky..then flour..still a mess.
I cover and decide to let it sit for 45 min..while I make Sunday breakfast..french toast,
fresh strawberries & bacon. My husband decides to assist and dumps the dough out on the
bread board ..OK..I tell him wait..not ready yet and cover it up. We eat..I go back
to my doughy mess..hmm not too bad..dough has relaxed ..so I fold..put it to rest ..I'm in
the shower and now remember I haven't put in the salt, sugar and olive oil!!..another 45 min
has gone by and it has risen..Hmm..I know I am committing bread suicide..I pour my dough into my food processor..add the salt, sugar and olive oil and do the wicked deed..and pray.
I let it rest again..fold and back into the bowl. A hour later..it has risen nicely..so
I divide and fold and into the fridge ... and so the sourdough rises.. I hope
until tomorrow...
I do have a dilemma..usually I get out of work at 2:30 PM..but tomorrow 5:30..
if my house is pretty cool ..in the 60's ..can I take my bread out of the fridge to rise
@ 6AM ish? so I can bake tomorrow night..and/or can I wait until Tuesday to bake..when I
get home earlier?