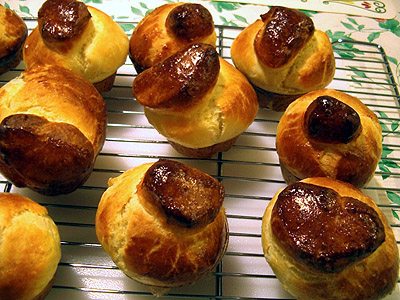 If chocolate bread isn't to your sweetheart's liking, how about something buttery like Brioche?

Below is recipe for a simple brioche with a chocolate surprise inside.

Brioche is traditionally made in special fluted pans, like the one seen in the picture above. I am much too cheap to buy special pans for something I am likely to only make once or twice a year. I used a regular muffin tin to approximate the shape of the brioche pan. One can also make rolls and place them directly onto a sheet pan. There is no reason one couldn't use a small loaf pan either.

Brioche is often shaped into petite brioche � t�te, with a small ball of dough placed on top of a larger ball of dough. In honor of Valentine's Day, instead of round heads I shaped the t�tes into little hearts.

This recipe is based on the Middle-Class Brioche in Peter Reinhart's The Bread Baker's Apprentice. It makes use of a sponge before the butter is added, as well an extended period in the refrigerator after it has been added, so it is easiest to prepare this recipe over two days. Recipes for brioche that skip the sponge stage exist, so I'd Google for one if you're in a hurry. Almost all brioche recipes require a rest in the refrigerator though, because the dough is difficult to work with unless it has been chilled.

Mix the ingredients for the sponge in a bowl together until the flour is fully hydrated. Cover with plastic and let rise for 45 minutes to an hour.

Whisk together the eggs and the sponge until smooth. In a separate bowl, mix together the flour, sugar, and salt. Add the dry ingredients to the sponge and eggs and stir until all of the ingredients are combined and the flour is evenly hydrated. Let this mixture rest for 5 minutes to allow the gluten to relax.

Work the butter into the dough. It is easiest to do this by warming the butter to room temperature and then working it in a few chunks at a time. You can do this in a mixer, with a wooden spoon, or by hand (I did the latter). Continue working the dough for 5 minutes or so after the butter has been incorporated. The dough will be very soft and moist.

If you have parchment paper, line a sheet pan with it and then spray the parchment with oil. If you don't, just oil the pan well. Pour the dough from the bowl onto the pan and spread it to make a large, thick rectangle, approximately 6 by 8 inches. Mist the top of the dough with oil and cover the pan with plastic. Put the pan into the refrigerator until the dough is thoroughly chilled, at least 2 or 3 hours (I just left it in there overnight).

Remove the dough just before shaping: you want to work with it while it is as cold as possible. 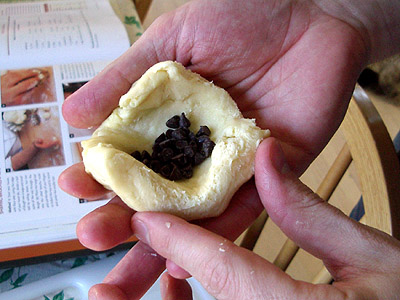 I shaped the dough by flattening it until it was about 1/2 inch thick and then cutting it into fifteen 3 inch squares. Into the middle of these squares I dropped a handful of mini-chocolate chips. I then closed them up, sealing the chocolate into the center of the dough. I placed each of them, seam side down, into the cups of a greased muffin tin. I did this with 12 of the squares of dough. 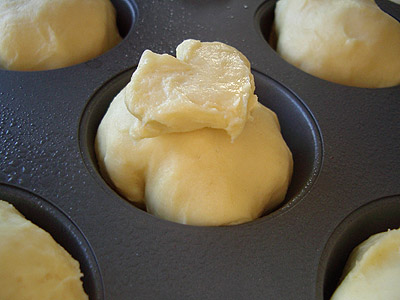 The last three squares of dough I used for the heart shaped t�tes. I found it easiest to do this by rolling all of this dough into a long tube and then slicing off little discs of dough. Each disc I then squished and squeezed until it looked something like a heart. Once shaped, I placed each one on top of one of the large bowls of dough.

Once all of the buns were shaped, I placed the muffin tin in a large plastic bag and set them aside to rise for 2 hours.

I preheated the oven to 400 degrees. I removed the brioche from the plastic bag and brushed them with an egg wash (an egg that has been whisked until frothy, brushed on with a little kitchen brush).

Because they were so small they only took about 20 minutes to bake. If you bake them in a larger pan it will take longer. 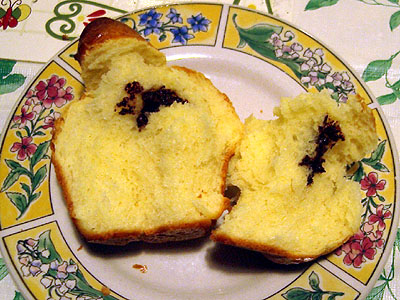 As you can see, all of the butter and eggs gave the bread a rich yellow color. I thought the bread was just about right: rich without being too rich, with just a touch of sweetness from the chocolate surprise inside. My sweetheart enjoyed them too.

Dear floydm,
They look delicious :-) . Is this recipe is the same in the bread bakers apprentice cookbook ?

Yes, this is the middle class brioche from the BBA. The chocolate isn't in BBA, it just sounded like a good idea!

I made some Brioche this weekend for my birthday party. I went with a normal recipe, though I upped the butter a good bit for flavor. They were delicious.

I was thinking, afterward, about how good they'd taste sprinkled with cinamon sugar and with a bit of vanilla in the basic recipe.