This is Michel Suas' recipe/formula for "Rotolo Di Natali" from his book "Advance Bread and Pastry".  In the summary at the beginning of the recipe Mr. Suas says: "This ring of dough is usually baked in Italy for Christmas celebrations.  The combination of soft enriched dough and crunchy filling creates an unusual texture, while the appealing presentation makes Rotolo Di Natali a festive centerpiece."

I tried to find the origin and story behind this lovely, deliciously filled sweet bread but was unable to do so.

However, years ago I was enrolled at the Dunwoody Institute's prestigious Professional Baking - Racker Certification Program.  That same year, through the generous endowment of the Lydia R. and Edgar P. Munnerlyn Charitable Trust, our graduating class was provided steerage tickets on the tramp freighter 'Honduran Gal", thus enabling the members of Dunwoody, class of '78, the opportunity to visit authentic artisan bakeries in Italy as part of Dunwoody's "Meet The Bakers" outreach program.

The Dunwoody "Rackers" had been in Italy for a couple of weeks and our class trip was winding down.  It was my last evening in Italy and I was feeling a bit nostalgic about the time I had spent in this wonderful country.   The evening was balmy and as I was strolling through the downtown piazza I noticed an elderly man sitting alone on a bench reading his newspaper, the light blue smoke from his short black Pierogi cigar encircling his head, then drifting slowly away into the night air.  I decided to approach him, and after we exchanged greetings and made perfunctory small talk, I casually asked him where I could go on my last night in this beautiful city to find the true essence of Italy.  Slowly folding his newspaper, he glanced around, making certain we were not being observed, and that no one was within earshot of our conversation.  I couldn't help but notice the old man's eyes were misting a bit as he reached into his jacket pocket and pulled out an old and tattered, dog-eared color photo of a beautiful, golden crown shaped loaf of bread, the top liberally sprinkled with coarse sugar creating a golden crispy crust.  He proudly held up the photo for me to examine.  Grinning, I nodded approvingly and in my fluent Italian I said: "Momma mia, thatsa nice a loafa you gotta there ina you foto"'

Smiling broadly, the old man lightly kissed the photo and carefully tucked it back into his jacket pocket.  Then, he motioned me a bit closer and as he leaned forward, a faint smile crossed his lips.  The old man spoke very softly, measuring each word, the way Orson Welles had done in Citizen Kane when the camera, in the opening scene focused on his mouth, and his lips spoke the immortal word: "Rosebud".  The old man slowly stood up, placing one hand on my shoulder and leaning a bit closer to my ear, he softly whispered: "Rotolo Di Natali".

Since that evening I have wondered about the true meaning of these words?  Then recently, after finding Michel Suas' recipe and baking this terrific sweet bread, I understand exactly what the old man meant that night in the piazza.

OK, confession time.  There really wasn't any old man on the piazza bench that night in Italy.  I made it all up.  But seriously, this bread is a very nice European style holiday treat, filled with a mixture of nuts, sugar, cacao powder, raisins, rum and beaten egg whites. 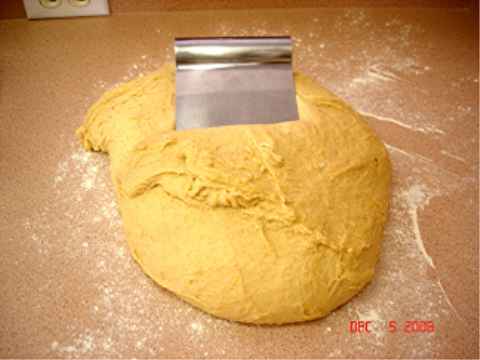 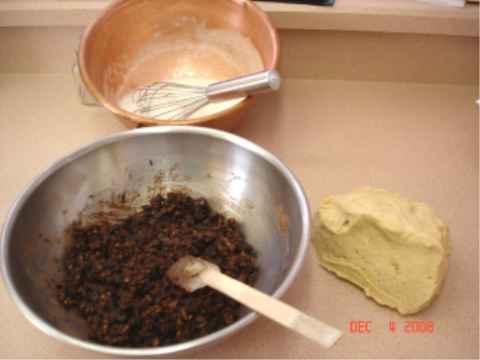 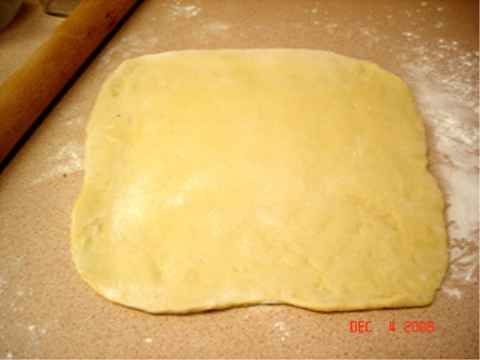 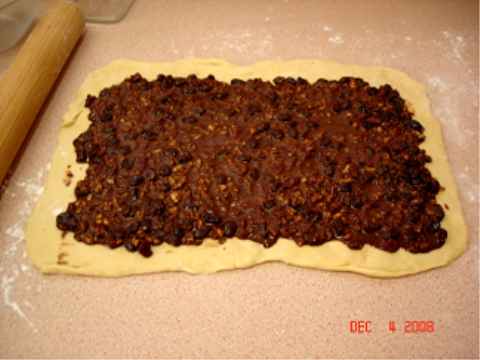 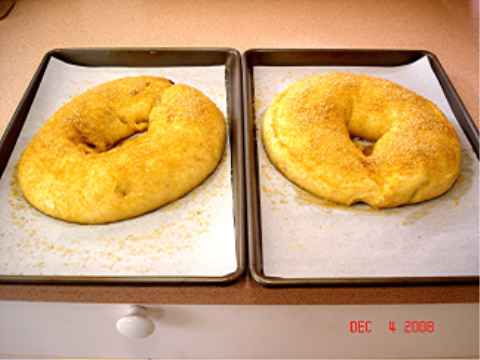 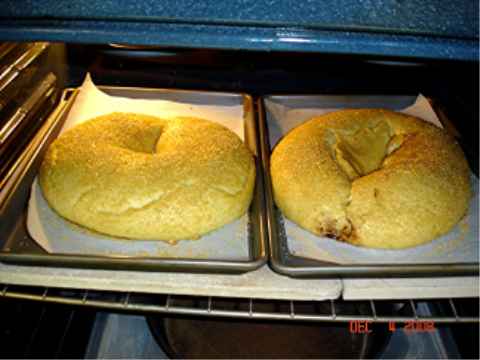 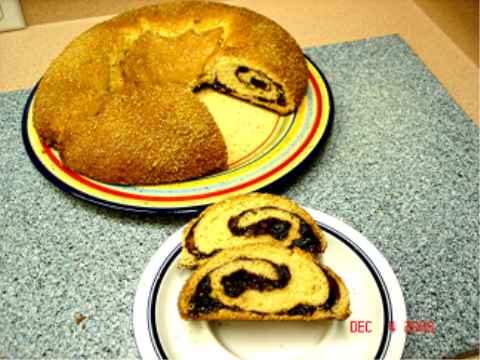 And at what point did you start lying? (Just in this post of course.) :)

The ficticious story about the Rackers is loosely based on a video that Norm posted a while back about the Dunwoody Institute, where they trained bakers, in the 1940's, for assembly line baking tasks.  One of the positions they trained for was that of "Racker", a no brainer job for the baker who, in huge baking centers, loads the pans of dough into the big ovens.  Norm's video was hilarious and if you had seen it you would understand the context, and the story may have made more sense.

Suas isn't very specific about how to make this bread or whether or not to chop the nuts. I chopped them into approximately 3/8 inch pieces after toasting them.  Below is Suas' recipe as it appears in his AB&P book.  As I said, he isn't long on detail but from the pictures I posted you should be able to see what I did at the various steps.

Below is Suis' recipe, which may answer some of your questions.  If anyone is expecting a gooey, sweet American style bread like sticky buns they will be disappointed.  That being said, it's a very nice bread...and different.  A small slice of this bread goes well with a good cup of coffee or tea.  When I tasted it I was reminded of the sweet breads and some of the cakes the Germans make and sell in their Konditori cafes.  They're less sweet than American sweet breads and the crumb is a bit drier.

I doubled Suas' Test recipe (below) to make 4 lbs. of dough, 2 round crown shaped loaves.  If you want to only make one, just divide the ingredient amounts in half.  If you make this bread don't forget to apply the egg wash generously and I sprinkled it generously with coarse Turnanado sugar crystals.

NOTE: Egg wash and sprinkle coarse sugar on the loaves prior to baking.

Enriched story to go with the enriched dough. :-)

I greatly appreciate your kind words.

Howard...have you got some Irish Blood in you....great story!!  Your bread looks amazing!  Very festive for the Holidays!  It wouldn't last long around here!

There could be some Irish in the blood line...waaay back.  Hope all is well with you and yours and that you all have happy holidays.

Howard, you must have double majored at the Dunwoody Institute... baking and creative writing!  Your Rotolo Di Natali looks terrific.  And your travelog made for a gripping read.  Old Farnsy would be proud!  :)

In the humanitarian spirit of "Old Farnsy" the Board of Regents has approved your request.  You've been recently voted an honorary alum of Dunwoody---and here's the good news you've been waiting for.  With the "Racker" Reunion coming up in January, I'm holding 2 tickets aside for you.  Here's the best news of all...the key note speaker will be none other than Capt. Julio Juan Gonzales, skipper of "Honduran Gal".  Be sure to load up on video tapes for your camera...and brush up on your Spanish :>)

And so because of this, I am going to tell you two things:

1. I hope your wonderful wife will buy you an incredible digitl reflex camera for Christmas because your breads are fantastic that you are absolutely NOT doing them justice.

2. When you have that camera and know how to use it, you should start a real blog and show us your creations and write wonderful stories that we can read while admiring your bread and you can share the recipes!

How does that sound?

In the meantime, what a NICE looking bread and I'd love that as my centerpiece for Christmas breakfast.

I appreciate your very kind words.  I plan to get a new camera in the not-too-distant future...hope Santa is listening.  Since I have a Canon film camera, which the lenses are interchangable on the new Canon digitals, that's what I'm hoping to get.  I'm sure it will greatly improve the quality of the photos.

If Santa doesn't show up with the camera...then, no cookies and milk for him :>)

Reminds me that I should have heard from Dunwoody by now.  Probably on a slow boat similar to the one that delivered my ABand P.

Geez I need to get working on that book - if only I could finish my standard end of year culinary tasks...

Leave the Rotolo di Natali out for Santa and the camera is yours for sure...

Good to hear from you.  You definitely need to get started with AB&P.  It's a real winner.  Suas has done a great job on the book.  Only drawback, and it isn't a big one, is it's written with a slant toward professional bakers and is a little short on detail instructions on some of the formulas...but I love it!

Hope Santa is good to you and that you have a very happy holiday,

and story!! You had me completley!! I could smell the cigar smoke! Now I can get a whiff of the bread!

I can identify with the Italians.  In high school I had a number of Italian friends.  The father of one of my good friends smoked those black Pierogi cigars...and they do produce a light blue smoke and resemble blackened tree roots.  He used to invite me along with the family, during the holidays, to Maria's Italian restaurant in Baltimore's Little Italy when the family went out to dinner.   The smells in that restaurant were incredible; garlic, tomatoes, cheese and fresh baked bread with the waiters hustling around carrying huge trays of food and wine, and most of the people speaking Italian.  It was quite an experience.  It made for a great Sunday outing.  Just stay clear of the big guy, flashing the money around, getting the special treatment at the reserved corner table with the 6 bodyguards and the driver and car outside with the motor running :>)