The quarter sponge system was a method of professional breadmaking developed in Scotland and was designed to produce tall, airy tin loaves with the minimum amount of yeast possible. The quarter refers to the fact that a quarter of the total recipe water is used in the first sponge.

I've tried it a few times before, but the loaves were never as tall as they should be and lacked oven spring.

Not liking to give up on my breadmaking missions, I decided to have another go.

I have two recipes, one from Manna, by Walter Banfield (1946), and the other from The Modern Baker from John Kirkland (1911). Both recipes are pretty similar and this time I went with the Manna recipe. I upped the hydration from the original 55% to 61%. These old recipes always have low hydration - I guess it was because of the wheats used in those days. 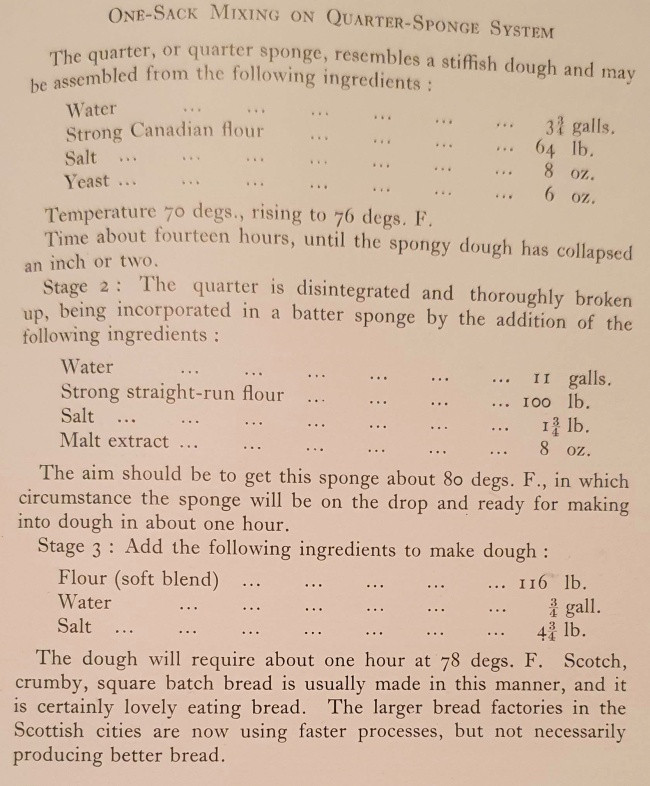 Previously I think I've followed the recipe times too closely and not fully taken account of what was actually going on with the dough.

The recipe starts with the Quarter Sponge (a stiff sponge):

After 14 hours this was well risen and starting to drop. Time for the next stage, which is the batter sponge:

All the stiff sponge, chopped up

Made in the Kenwood with K beater

Well mixed at moderate speed to give good aeration

This is allowed to rise fully and is then ready for use when it starts to drop. This should take an hour, but actually took 2hrs 40mins! 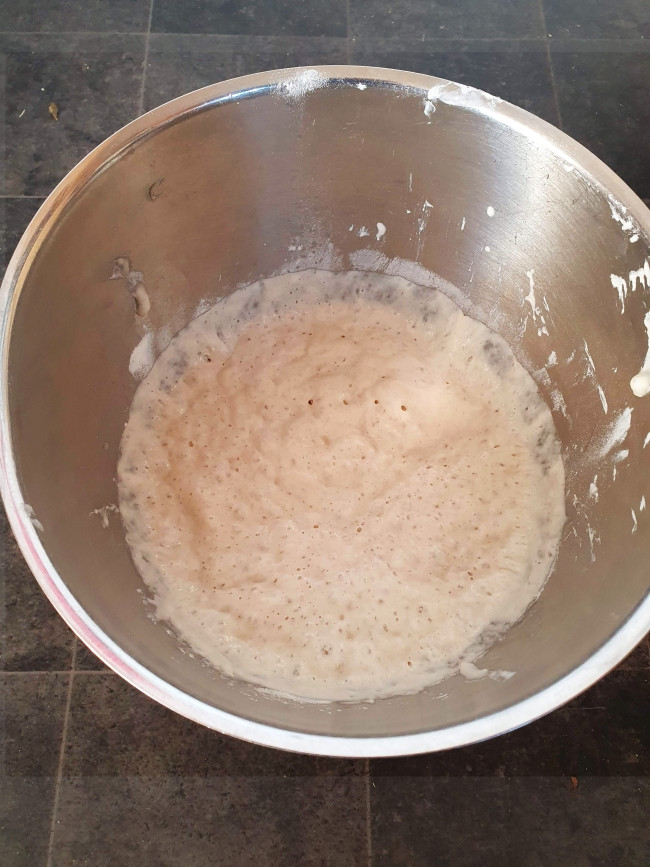 All the batter sponge

Mixed in the Famag with 5 minutes high speed

Punchdown and knead when well risen - 1hr 20mins, then fermented for another 1hr before turning out. (The recipe time for bulk is just 1 hour.)

Dough degassed by pinning out into squares and then shaping and placing into tins.

Final proof lasted 1hr 40mins, until dough had reached the shoulder of the tins

Ideally the loaves should be baked in wooden frames, (the loaves are then called Scottish plain loaves), but my wooden frame experiments are over, as I don't think they are suitable for a home oven. So I baked in tins. I do have one big tin that approximates pre-war tins in size and shape so I used that. It has tapered sides which I believe give better rise than straight sided tins. 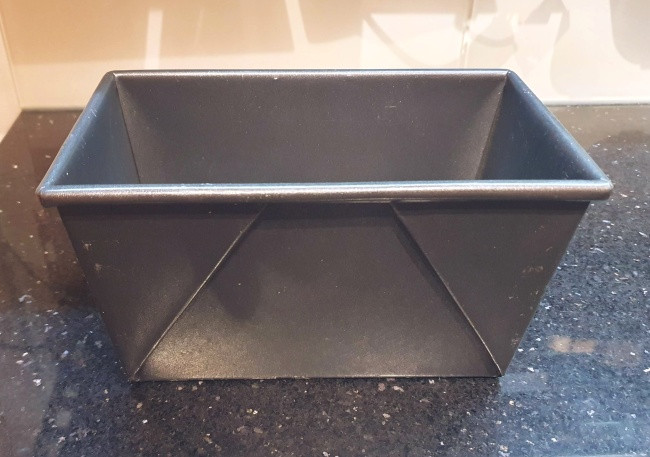 Much improved compared to my previous efforts! Good oven spring and a soft fluffy crumb. And very tasty, helped by the 22 hour fermentation. It's incredible to think that the yeast rate was only 0.135% fresh yeast! 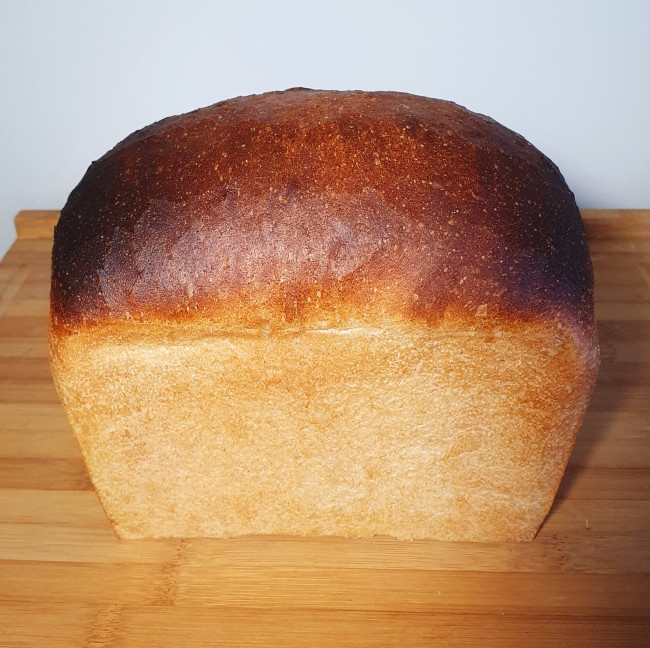 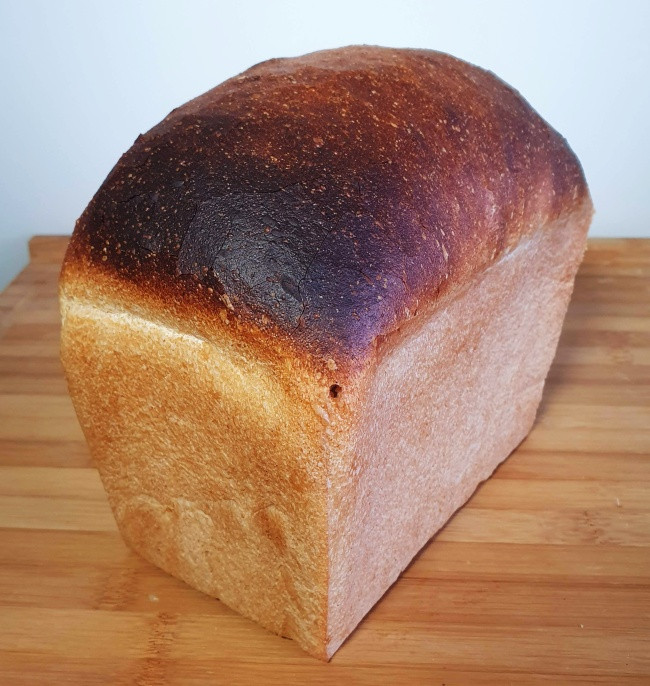 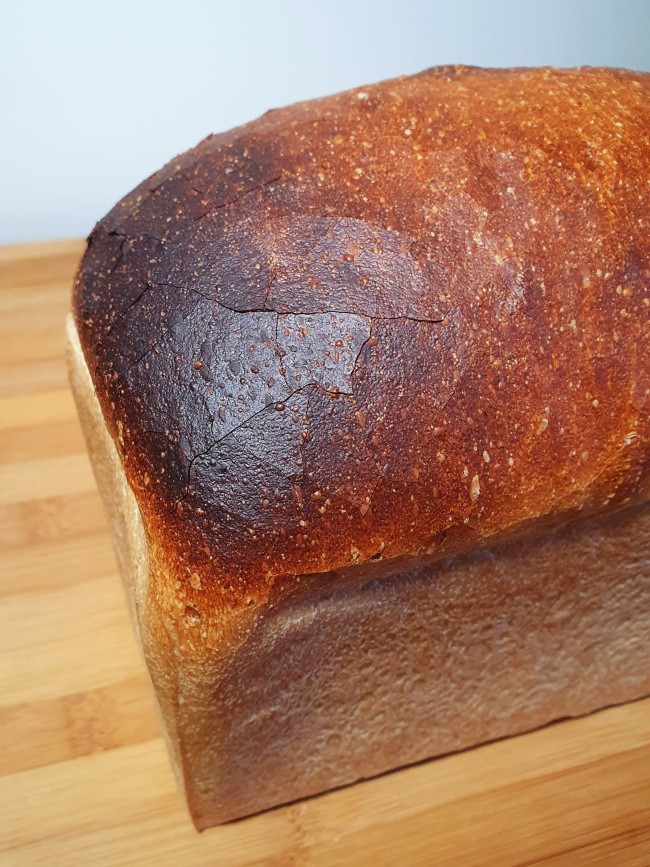 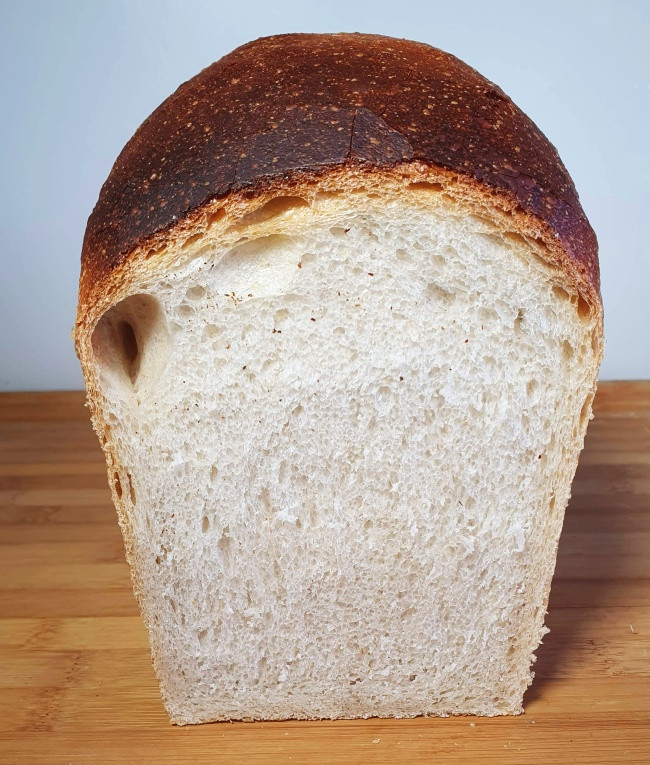 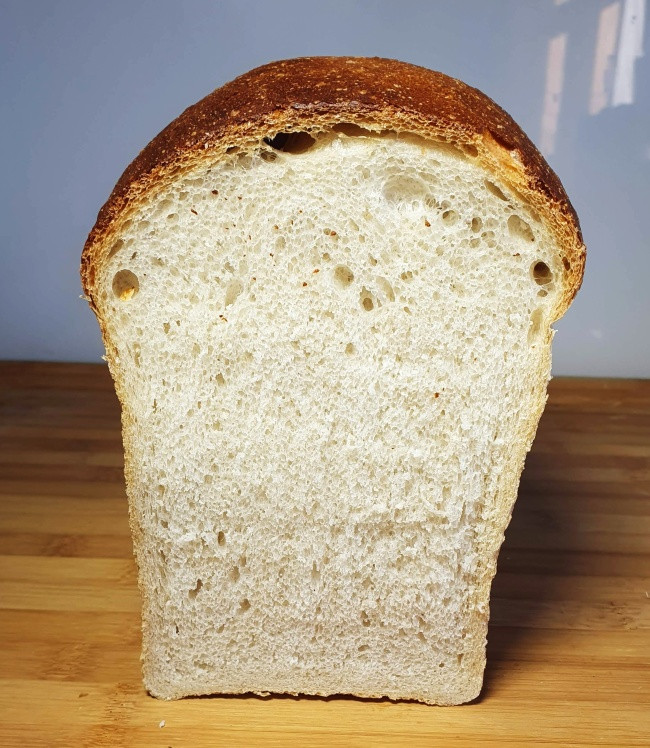 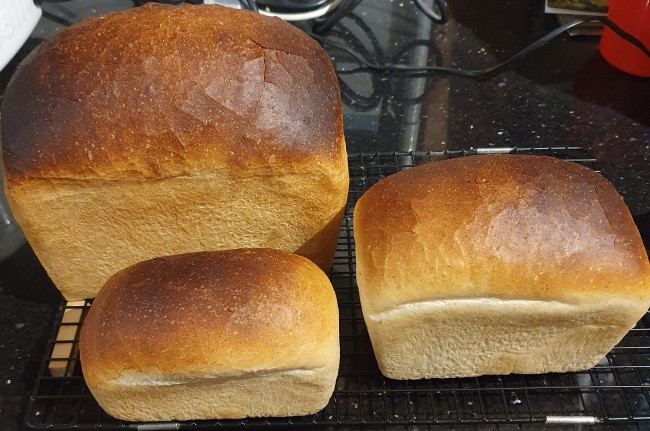 They are gorgeous Lance, I love the cracked top crust.  You got great height on these, nicely baked.

It's nice to get good height without needing any dough improvers - but I know you are already a master of that with your tangzhong loaves!

Those are gorgeous loaves !! You make the stiff sponge then add it to the batter sponge ...then....I don't see the inst. but you add all the batter sponge to the dough ingredients ? Are you using diastatic malt powder ? Can I use regular sugar for the glucose ?  It looks like a milk bread and the crumb is so perfect !! How much ADY would you substitute for the fresh yeast ? Thank you for your help. That will make spectacular toast with honey and butter !!

Which part of the instructions can't you see?

Yes, I used diastatic malt powder. And sugar will work in place of glucose - glucose just works a bit faster.

Try and follow my DDTs or your timings may be radically different.

I didn’t see a sentence saying “ add all batter to main dough” or something like that but it’s pretty obvious I just wanted to be sure.

I have no control for temps so will just wing it and watch accordingly. It’s beautiful bread will try it likely this weekend. Thanks again. c

I have edited to clarify for any future bakers.

Let us know how you get on.

Glad you like the bake and I agree the method is unusual.

It reminds me a bit of those long fermented SD bakes that kick off with a tiny amount of starter.

Thank you Lance for sharing. Going to give it a try. Perfect project for a chilly day.

You're welcome! It was probably your reference to it the other day that got me wanting to try it again.

developed in Scotland and was designed to produce tall, airy tin loaves with the minimum amount of yeast possible

Does the 1911 recipe call for strong Canadian flour? And what is straight-run flour?

Kirkland's recipe simply states (more vaguely) that a strong flour is generally used and definitely not a weak one.

"Straight run flour" is a tricky one.

I had a look in another old text book I have, called Breadcaft by J.R. Irons and this is what he said: 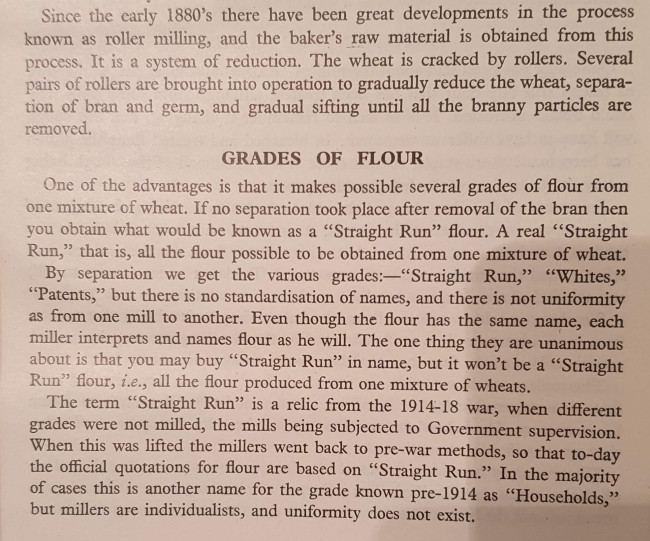 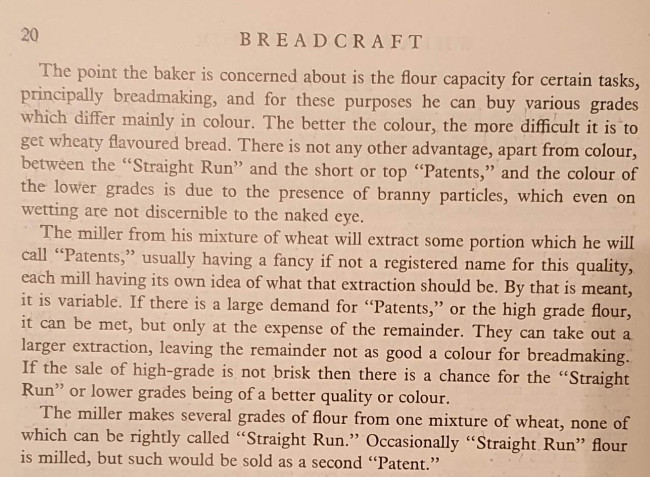 Not exactly the clearest of explanations, I'm afraid! I think the gist of it is that straight run was a white flour, but of not such a high grade as patents, but probably with more flavour.

No idea how I missed this, but I love everything about it. Wonderful exploration of the past interpreted to work with modern flours. Lovely crumb, enticing crust, standing tall. Kudos!

Those old bakers certainly knew their stuff and it's nice (and interesting) to follow in their footsteps from time to time.