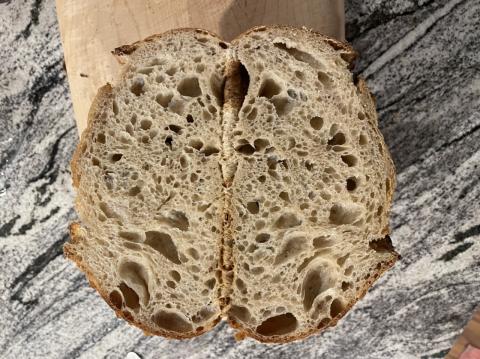 This recipe was brought to my attention in a recent post here with a link to the King Arthur blog post.
https://www.kingarthurbaking.com/blog/2020/04/06/dont-be-a-bread-hostage

I was curious because the recipe makes a similar version of my weekly bread and requires little to no prior planning and the schedule frees up the shorter daylight hours for other things like fishing or the neglected chores around the house. I was skeptical at first that it would produce only a passable bread but would be lacking something that a more hands on approach would provide. I was wrong about that.
I am one of those bakers that believe a starter has to be well maintained and developed to make an open crumb country bread similar to the Tartine style. I used the warm days of this past summer getting my starter and bread to be like the version that Chad Robertson writes about in his latest Bread book and what he refers to as a boosted leaven required for his signature country bread. It requires a bit more time and effort but it did work better and it made some pretty good loaves.
This so called “don’t be a hostage bread” might need a more catchy name but it has worked very well without fail in my few recent attempts at it. So well in fact that it may become my new go to method for my weekly bake.
The recipe is fairly simple:

80% hydration (which seems to work well for me)

40 grams starter recently fed but can be used straight from the fridge. (I have used a fresh fed and a few days old and both worked well.)

I mix the starter in the water first and then the flour and salt.The recipe calls for 4 compass folds 15 minutes apart. I used 3 coil folds 20 minutes apart.
Bulk ferment for 12 hours at 72 degrees or until it doubles. I would normally ferment to 50% but without the intermittent folds during the bulk it will easily double. After which it is divided and shaped for another 12 hours in the fridge.
Starting in the evening works best for me rather than putting it together first thing in the morning.
There is something about the long slow fermentation that produces a silky beautiful dough to work with like no other I have had before and brings out the flavors as well. 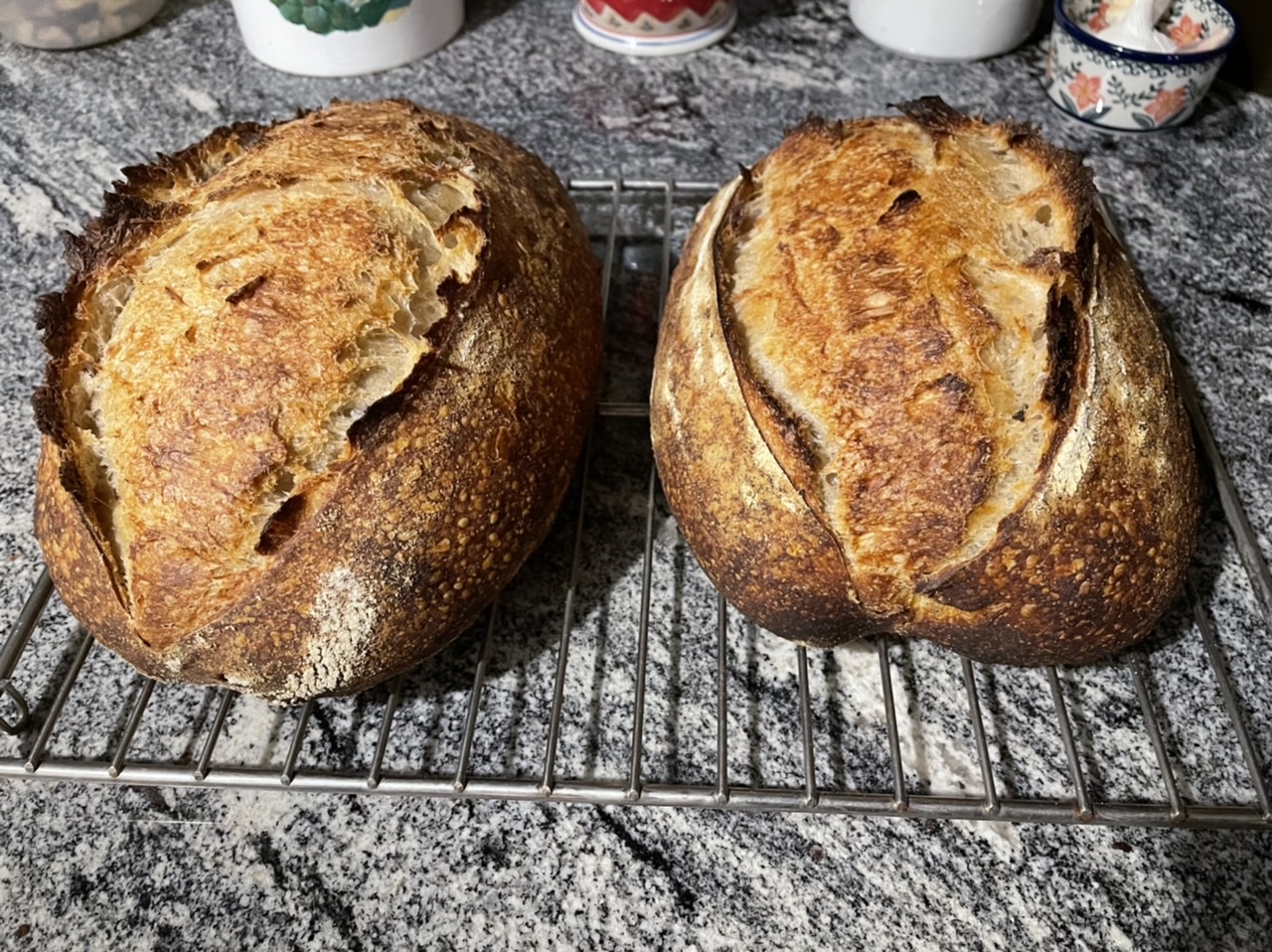 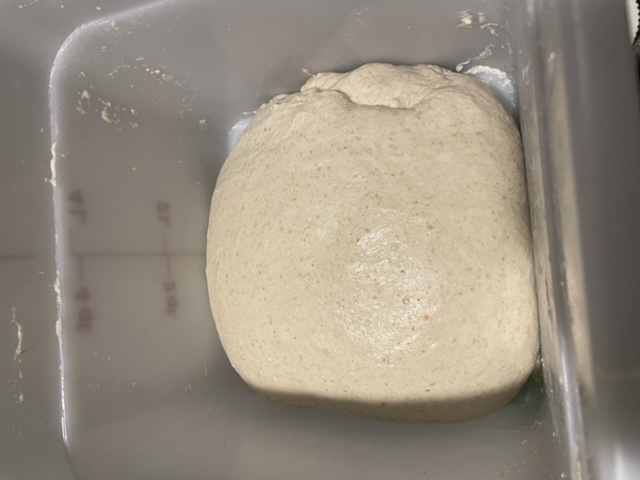 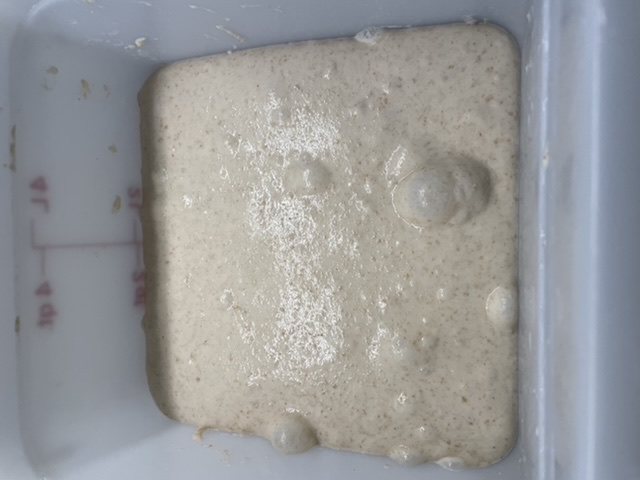 This is after the final fold and 11 hours later at the end of bulk fermentation. 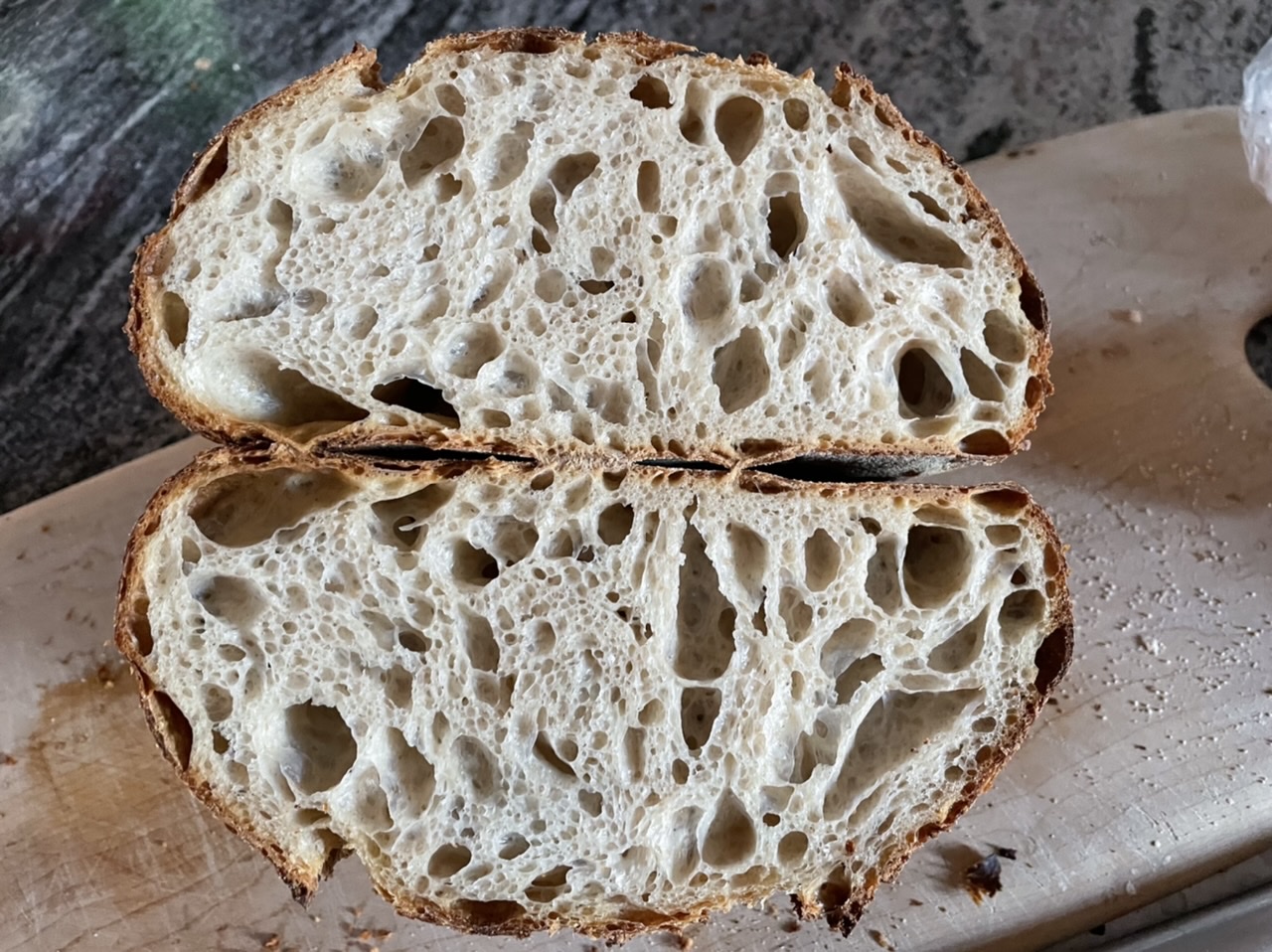 This loaf is 15% home milled spelt and the crumb is as good or better than the old way of doing it. 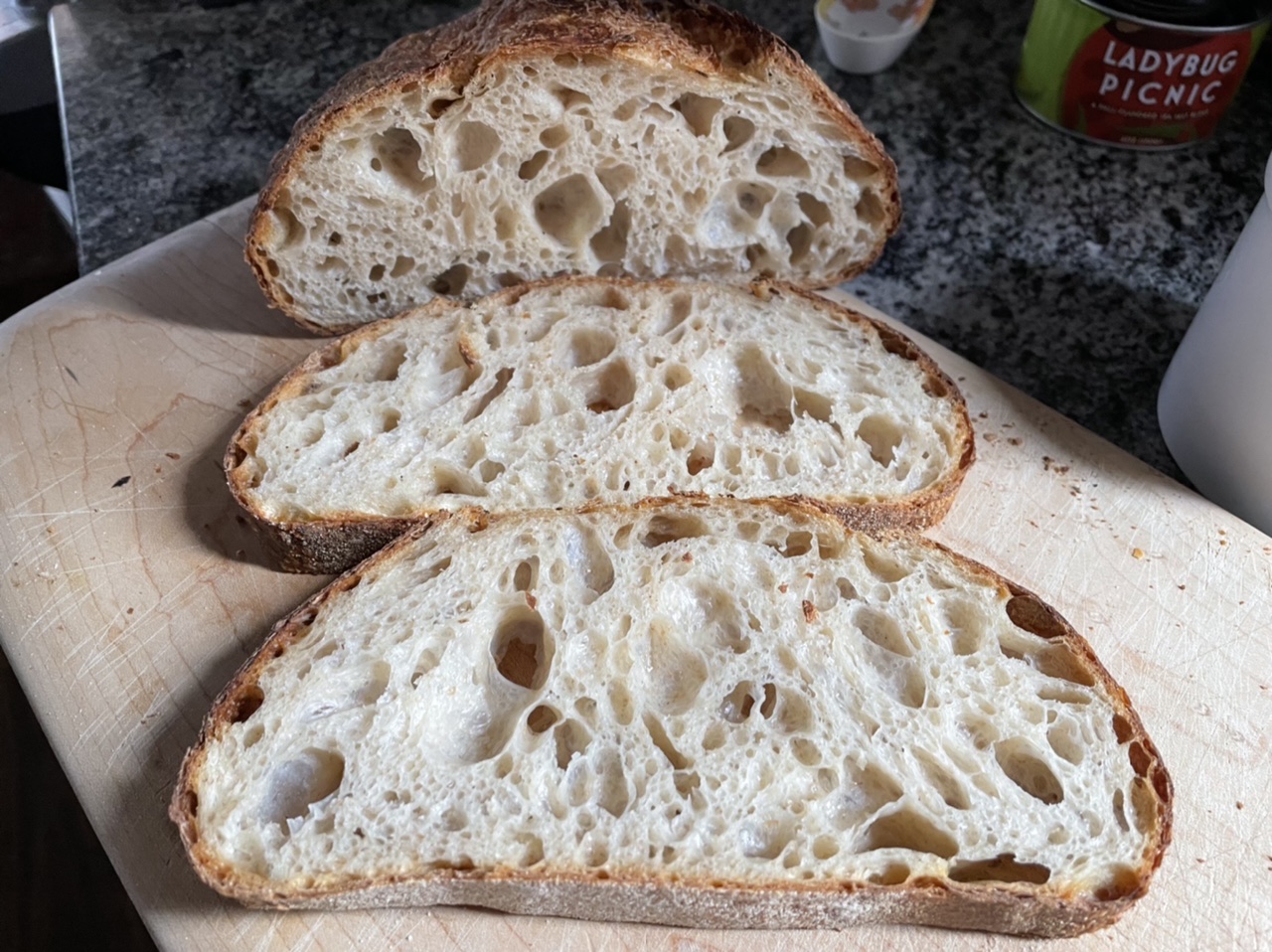 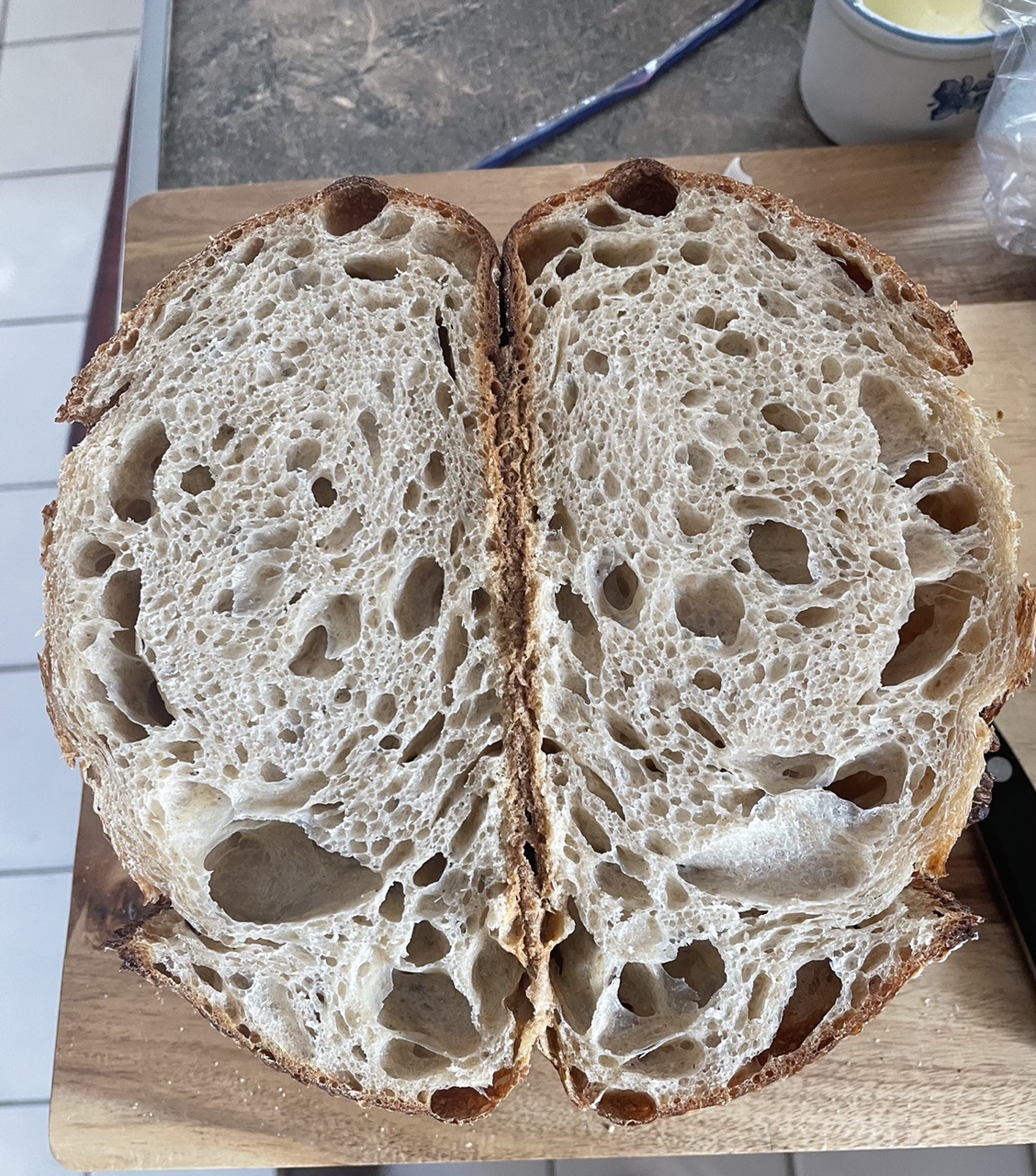 I would encourage others to try this method and come up with a better name but be aware of the “Stockholm Syndrome” because it has definitely changed my beliefs!

The other loaf from the Campagne dough which was shaped with a different method resulting in a more even crumb. 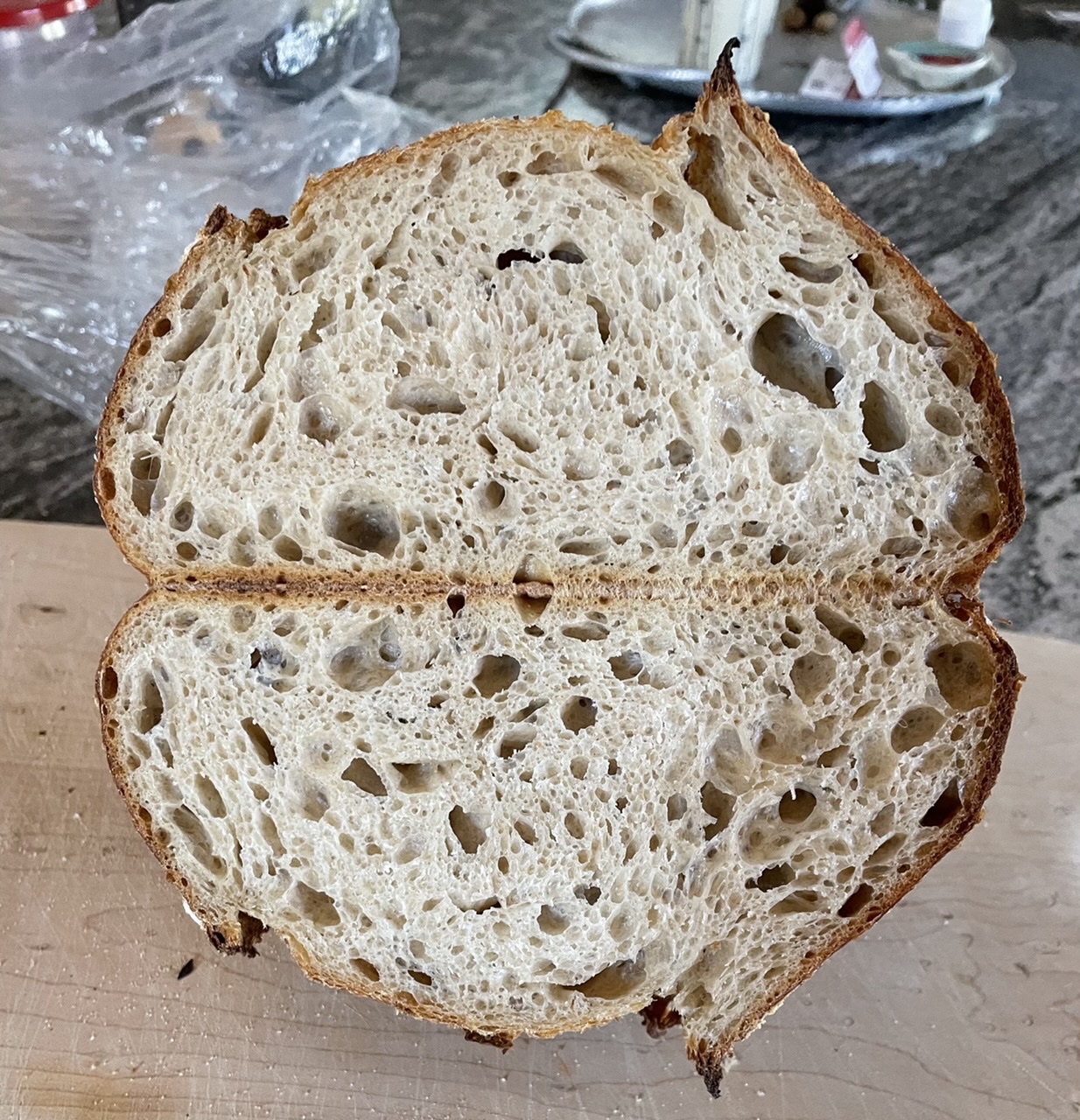 Free the Hostage bread is a much better name than Don’t Be a Hostage, you should contact King Arthur’s Martin Philip.  This method is yielding you beautiful open crumb Don.  I’ve never taken the belief that one has to feed their starter a few times prior to baking.  I’ve long fed my starter once or twice a week at most.

It does amaze me that end of bulk is 100% growth.  I suspect if I did that I’d have an overproofed weakened dough.  Anyhow, wonderful bakes using Martin’s formula!

I think because of the lack of folds during the bulk which is essentially a degassing, the dough can double but doesn't deteriorate like you would expect. Hamelman states that no dough should rest more than an hour and a half without a fold but that must be based on the larger amount of leavin in the dough which ferments much faster. When I saw the dough in the morning I expected some trouble but there was very little jiggle to it and it was a amazingly cohesive with quite a bit of tension for a high hydration dough. It really felt nicer and handled better than any dough from past methods. I don't use one but I have always wondered if you should fold the dough in the aliquot jar to replicate the dough but that is probably impractical.

I feed my starter at least once a week and never let it peak or fall too far in the jar when it is in the fridge. The last loaf was made from a unfed starter that was stirred and allowed to warm up and show signs of life again. Enjoy your fun in the sun but when you get back together with your starter and make up with it for leaving it behind, you should try this recipe. It has been a revelation to me.

Yes folding the aliquot dough would be very difficult.  But since there are only a couple folds and only during the first 30 mins the dough wouldn’t have had any appreciable rise at that time anyhow.  Still 100% rise at end of bulk seems crazy and impossible loaf does seem like a good name for it.  I may have to try this at some point when I’m reunited with my starter.

This one looks as nice as the one you posted previously. It really does need a better name though. You seem to like a good turn of phrase, so that should be right up your alley 😀!

For whatever reason this method did not produce a very sour flavor so your resident tasting panel may just approve.
It seems as though all the minimal effort bread recipe names are already taken so I may have to go in the other direction like “Impossible bread” or “Not going to work bread” maybe “Lazy loaf” scratch that I just thought of another “Freedom bread” or “Freedumb loaf”🫤!  Whatever it’s good bread and I hope it works for you

I baked my first loaf this morning (details on my blog) and I have to say I agree with you. The only thing about this bread that needs changing is its name.

The bread was dead simple to make and enjoyable to eat, so I'll definitely be making it again. I guess that means I've broken free from the prison of sourdough 🤣. Thus, the formula is now in my bread database, temporarily filed under Jail Break Bread until someone comes up with a good name. Good bread deserves a good name.

Someone will come up with a proper name for it eventually. I am going to explore this method more because it suits the lazy me to a T

I want to include a thanks to TFL member Grigio for sharing this recipe here in this post. Even if he did undersell it a little.

The KA blog is a couple years old but it was new to me. I hope others here will take a stab at it, hopefully someone with a brand marketing background to help with the name.
Happy Baking

It exceeded my expectations in every way.

These all look great Don!  I’ll have to check that recipe out.

I look forward to seeing how it woks for you.
Don