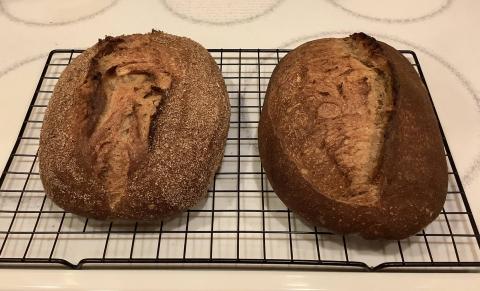 When I read Ian's recent blog post, I put this one on my short list for bakes.  Not only because of the Guinness, but the blend of grains as well.

I translated his recipe into two standard loaves for me and stayed as true to his recipe as I could.  Only a few small changes that I don't think changed anything significantly.
1) I omitted the EVOO;
2) I used my standard method for potato bread prep (caramelizing the potatoes).  With that I increased the hydration in the formula, but in all likelihood, his method of mashed potatoes (higher hydration than fried potatoes) probably yielded a similar final dough consistency;
3) I used a combination of a stiff starter (45% hydration) and a liquid starter (100% hydration) to achieve his 60% hydration.

My stiff starter is relatively new and I don't have much experience with it.  Due to weekend schedules and work travel, I was only able to get one refresh in after 2 weeks in the refrigerator.  It responded well, but was a little more acidic than I would have liked.  The dough developed well after mixing.  I used my standard 4 sets of bowl kneading for gluten development.  I was finished with gluten development and the dough went into the proofer 90 minutes after mixing.  It appeared to be fermenting quickly at the 30 minute fold and looked even further along at the next 30 minute fold, so I moved to shaping.  This is quicker than I expected, but maybe not surprising given the amount of pre-fermented flour.  Next time, I think I'll do more kneading early to get through gluten development quicker so I can get a better feel for the fermentation progress.  After shaping however, the dough drastically slowed and was in final proof for almost 3 hours.  It was nice and jiggly, but did not reach the level of expansion I expected.  I attribute that to the acidity in the stiff starter but that's a bit of speculation at this point.  Need to get more experience with that starter before drawing too many conclusions.

That said, I did get some good oven spring and very happy with how the loaves turned out.  One is scored with a single long score and the other is coated with the bran from sifting the whole grain and baked seam side up.  The aroma is whole grain with a hint of sweetness and that comes through in the flavor as well.  A firm flavorful crust with a moist crumb!  I used it for a grilled turkey sandwich today and it was great!  The toasted bran on the crust gave the loaf a nice little crunch.  I will make this one again!

1) Mill grains and sift through a #40 sieve.  Set bran aside.
2) Combine ingredients for Levain #1 and ferment 5-6 hours at 76 deg F (expanded to about 150% and well domed)
3) Combine ingredients for Levain #2 with all of Levain #1.  Ferment for 2-3 hours at 76 deg F
4) Caramelize potatoes by frying at low heat for 1-2 hours in a covered, buttered pan.  Stir occasionally.  The goal is to soften/caramelize the potatoes without forming any brown fry crust on the potatoes. Cool to room temperature.
5) Combine the fried potatoes with the final dough water and puree them in a food processor.
6) Combine all the final ingredients, Levain #2, and potato puree and mix to a shaggy dough.  Autolyse 15 minutes.
7) Add salt and perform 4 sets of bowl kneading with 10 minute rests between sets.
8) Bulk ferment at 76 deg F with folds every 30-45 minutes until dough has expanded 50-75%
9) Divide dough and pre-shape.  Bench rest 15-20 minutes.
10) Final shape and final proof at 76 deg F until doubled in size and jiggly.
11) Preheat oven to 465.  Steam oven and bake at 465 deg F (2 minutes) and 400 deg F (18 minutes); vent oven; bake at 435 deg F (20 minutes)

Pictures and videos of yesterday's bake. 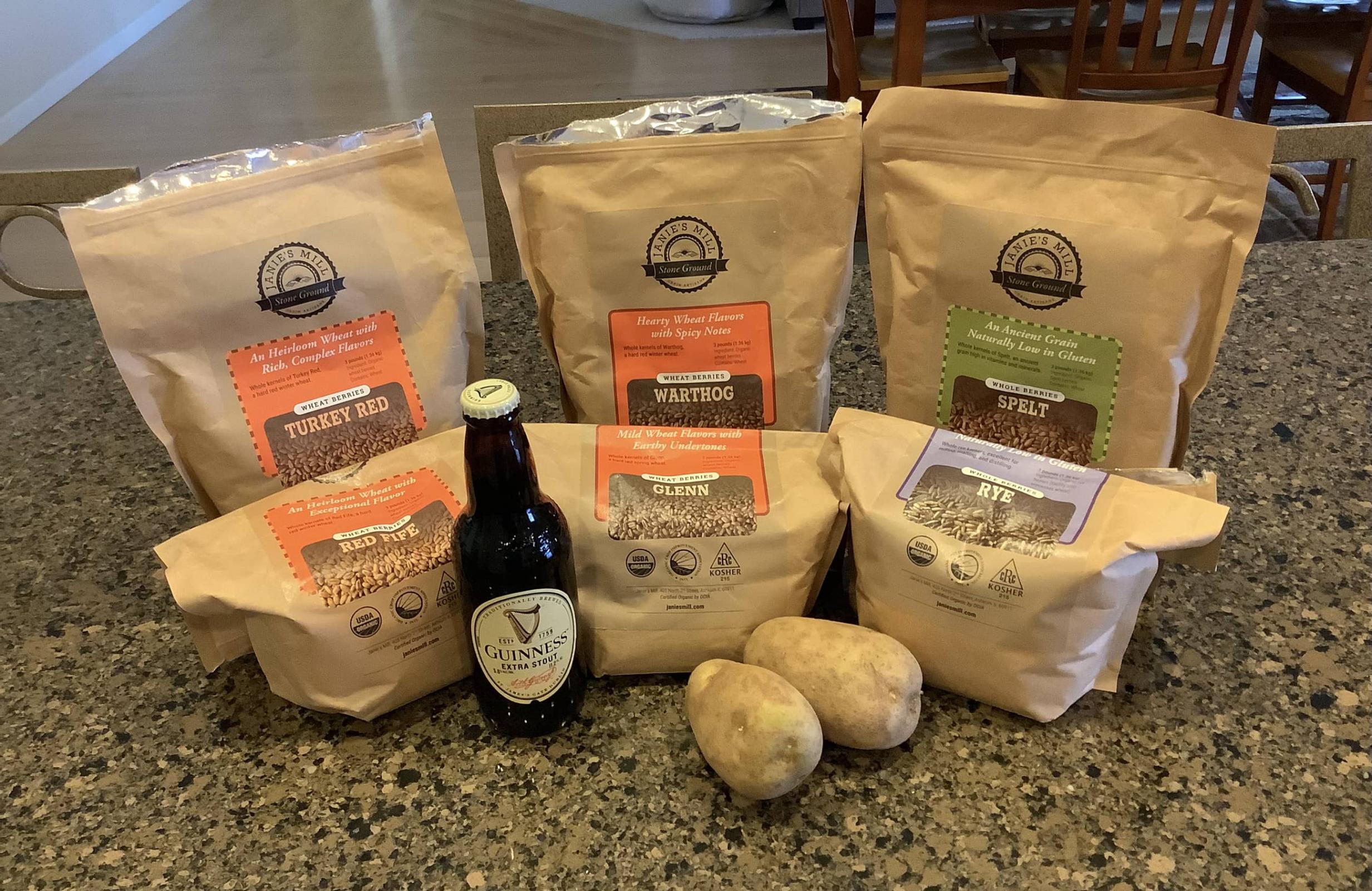 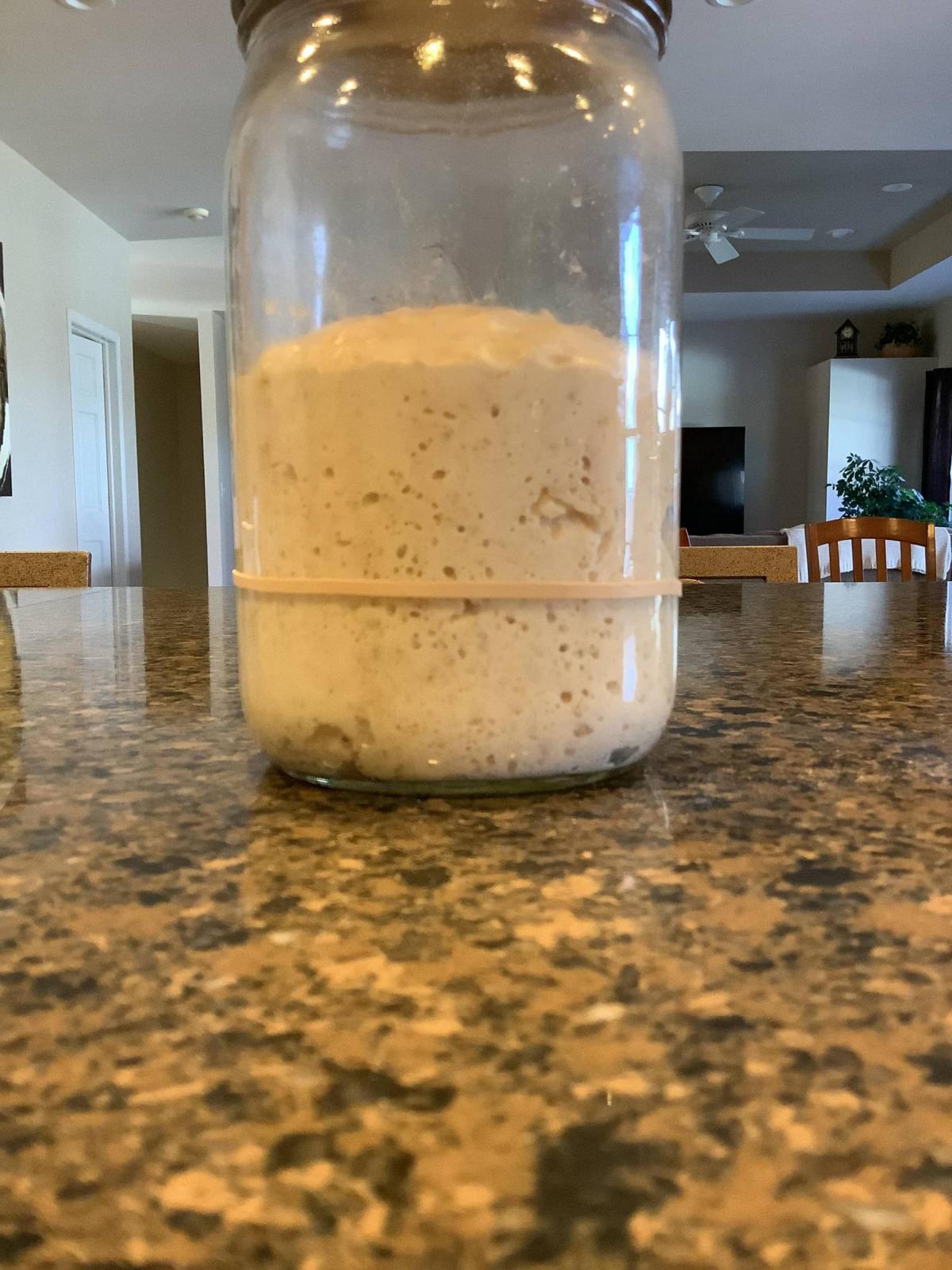 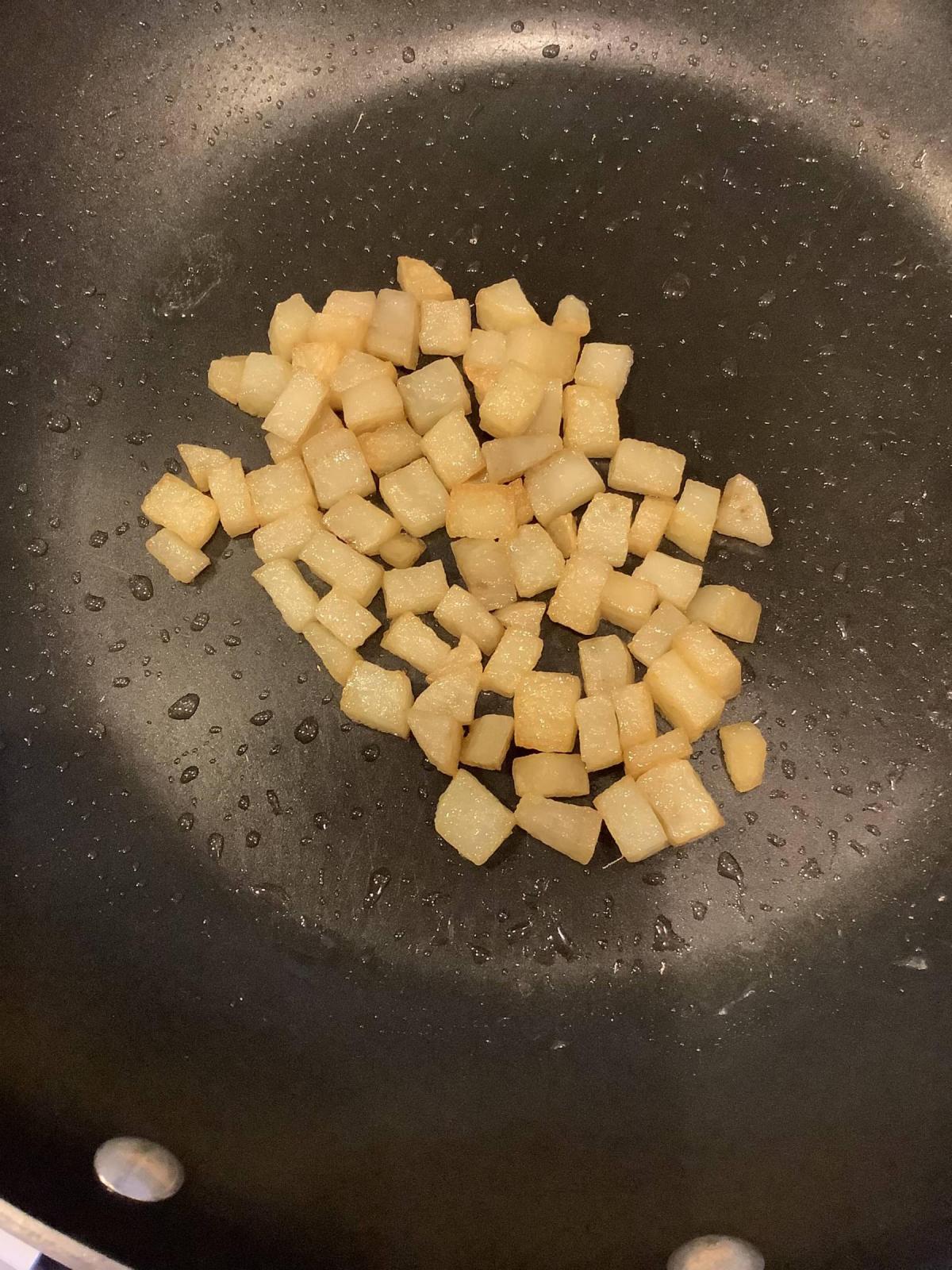 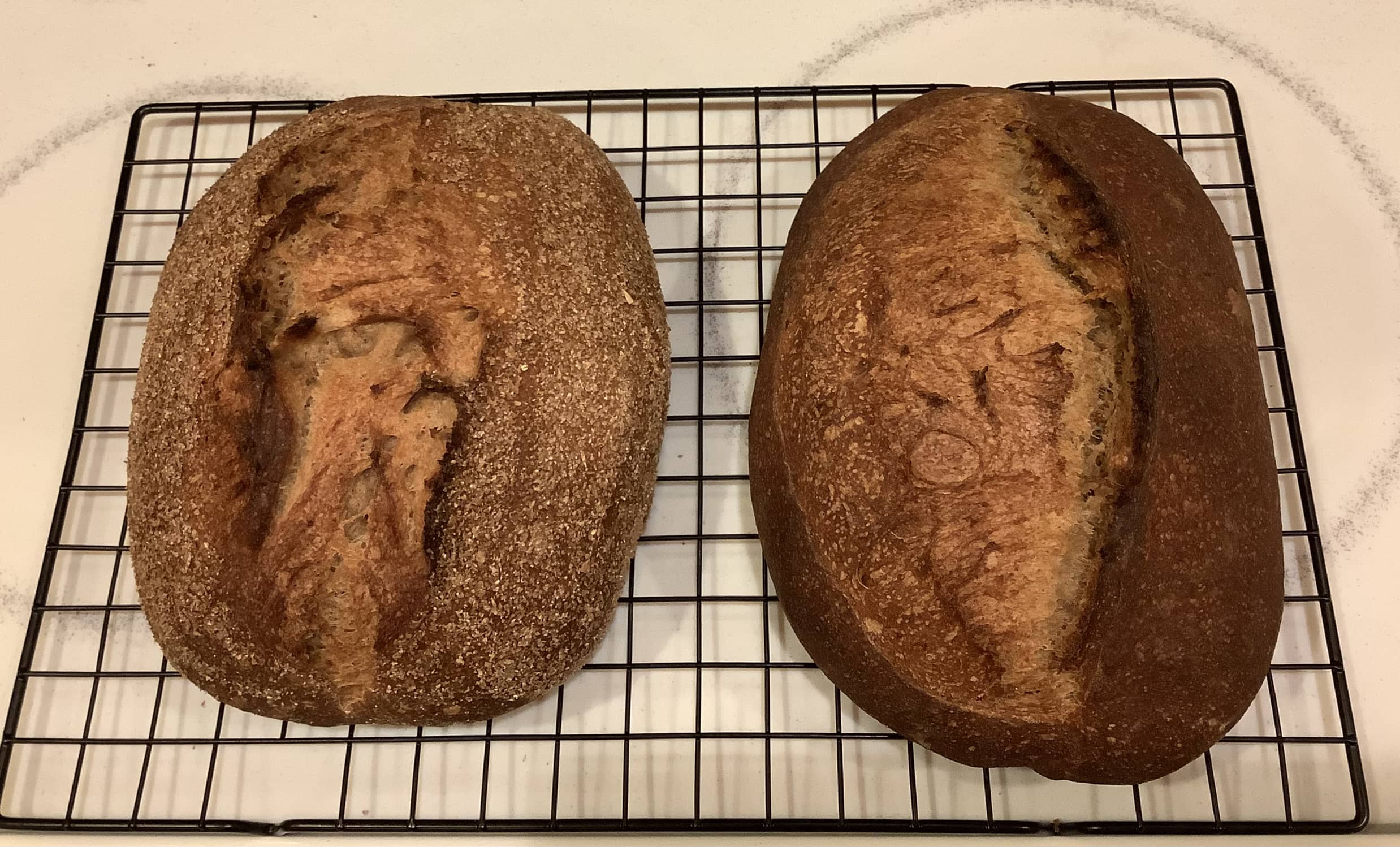 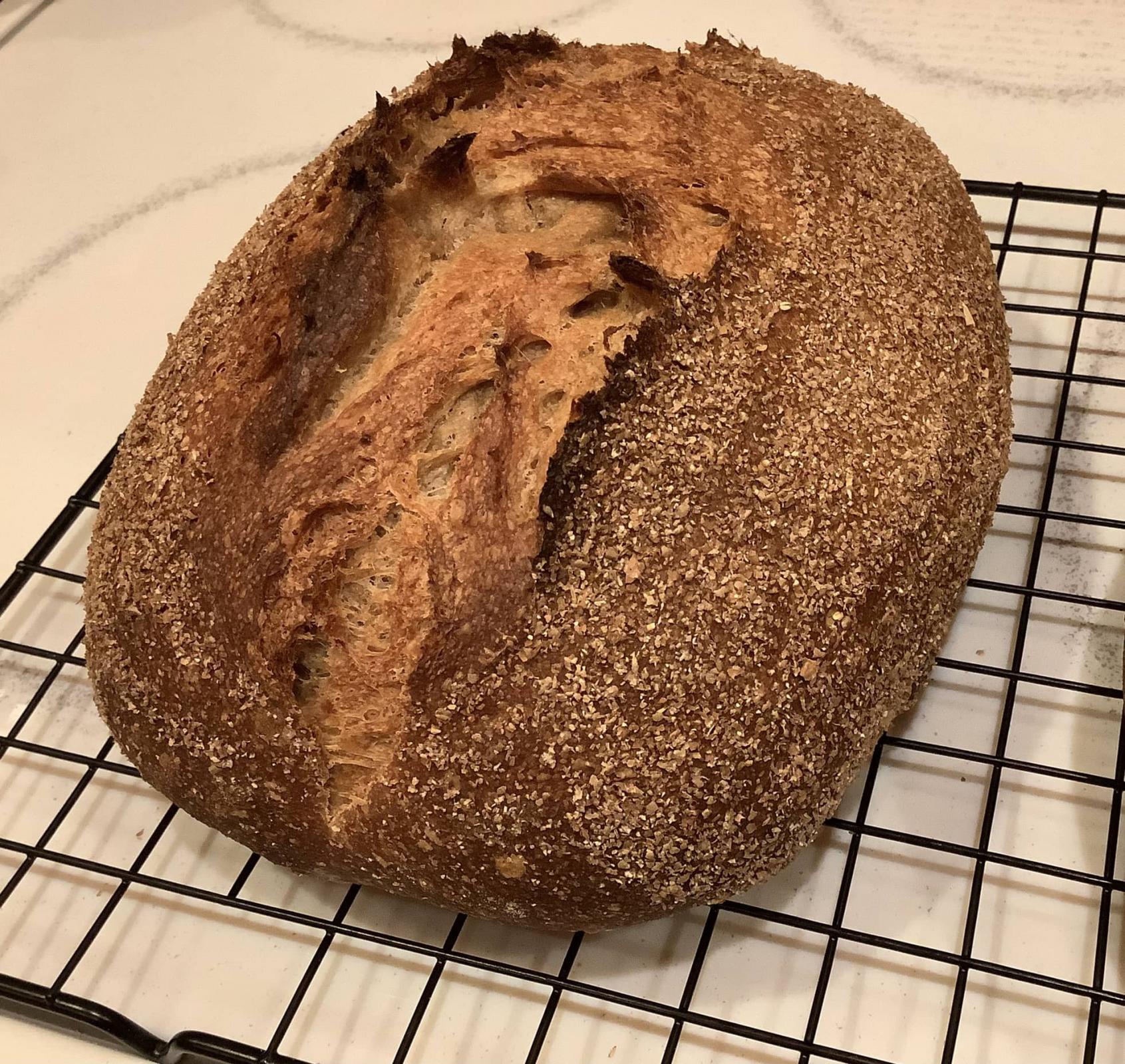 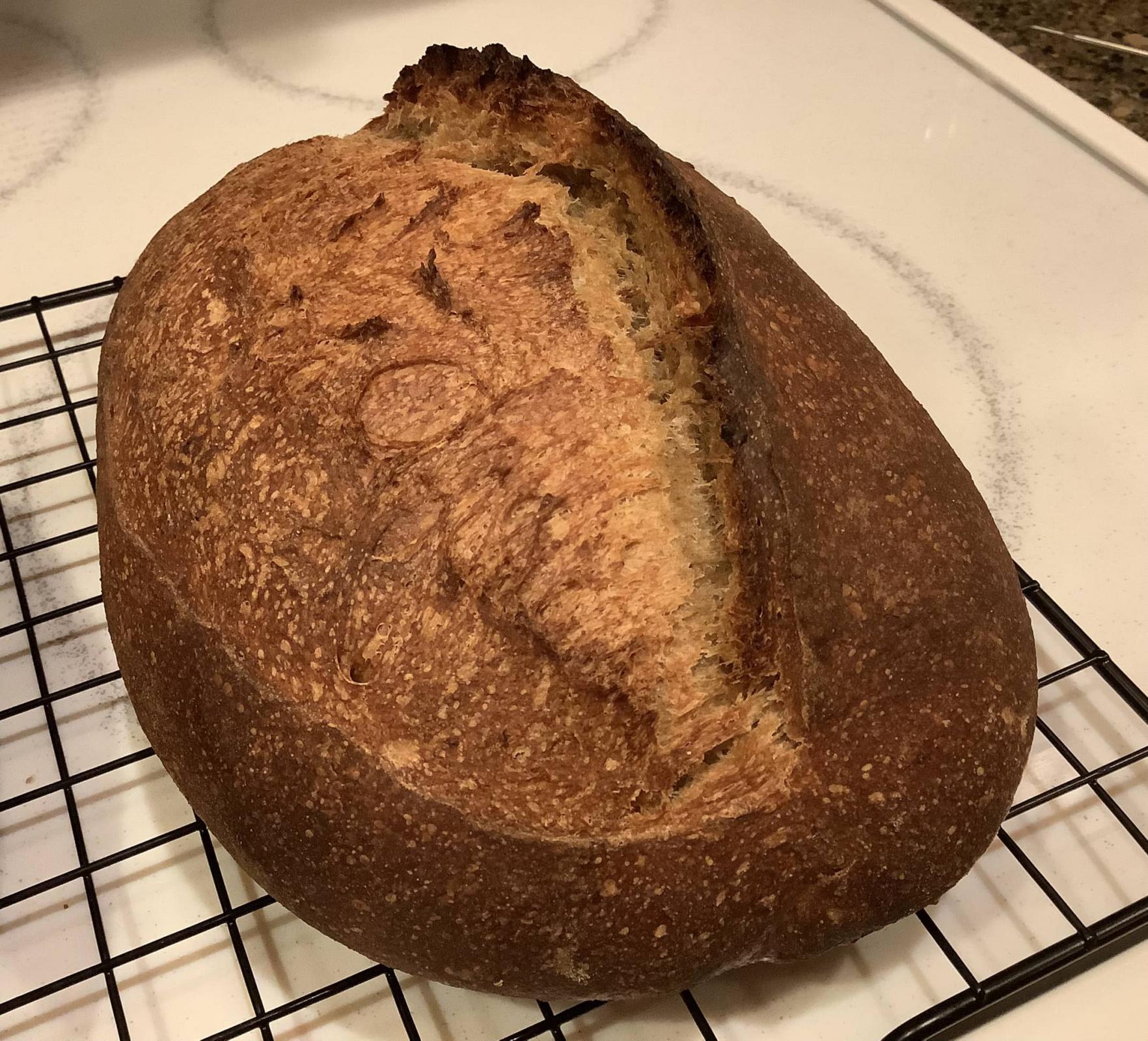 Crumb reveal video.  Very happy with how this turned out, especially given 50% whole grain and potato puree. Bit of a shaping error in the center of the slice...
https://youtube.com/shorts/2xLL27EoN34

So glad this turned out well for you.  It really is such a flavorful bread and it looks like yours was a success!

Interesting idea with the pan fried potatoes.  I’ve used baked and roasted potatoes before so will have to try your method as well.

Thank you Ian!  I just wish my schedule allowed for another refresh to take away the doubt about the starter acidity.  Will get it right next time!

The trick with the potatoes…. Treat it like smoking a pork shoulder.  Keep them covered and go low and slow.  You want to avoid browning them and forming “crunchy” edges. I don’t get the pan hot enough to brown them.  Just a tiny bit of butter and time.  The starch in the potato will gelatinize and it produces a more intense potato aroma.  For the last step in preparation for mixing, I purée them to avoid the annoying potato lumps that I would get when I mashed them the first few times I tried a potato bread.

Excellent bake Troy.  I like that you did two different types of score one being natural.  I haven’t tried coating a loaf with bran, but it has a great look to it.  The crumb looks perfect for a loaf with potato in it, nice and even, perfect for toppings.

That was my first time trying the bran as well.  It adheres pretty well and doesn’t make any more of a mess than sesame seeds when slicing.  Adds a nice little crunch and the bran gets nice and toasted during the bake.

I noted Ian's recent post as well, and happen to have some potatoes that I need to use up, too! :) I think I'll add this one to the (somewhat long) "to-bake" list!

Nicely done, Troy....LOVE the crumb you got!

It's a nice bake and definitely one to have on the "to bake" list!  I've been having fun the last month or so doing bakes from other TFL'ers and trying to shrink the "To Bake" list.  Might be a fun Community Bake that really does revolve around the community.  A Community Bake where we all pick a bake from another TFL'er and replicate it.  :-)

I just realized that I didn't add the ingredient list in the write-up.  I'll add it now...

You guys inspired me.

I cut the recipe to make 1 loaf & now I'm thinking that was a serious mistake bc my girlfriend & I already ate half of it.

I started out thinking I would make a full batch & so jettisoned the second levain build (tho, bc of my schedule, I let the levain ferment for 12 hours & refrigerated it for another 8). I let the dough bulk ferment for about 4 hours and then shaped it, rolled it in oats to prevent sticking, & popped it in the fridge for maybe 30 hours. I baked it in a dutch oven, 15 minutes with steam and 20 minutes without -- and the crust is fantastic.

I cut into it almost immediately after pulling it from the oven -- so the crumb shows tearing. I also discovered that the flavor really sets in after it cools a bit.

Thanks bigtime to both of you for the inspirational recipe & the reaction post that reminded me to try it myself. 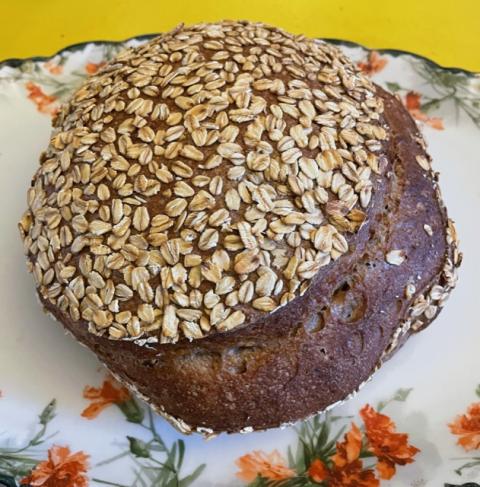 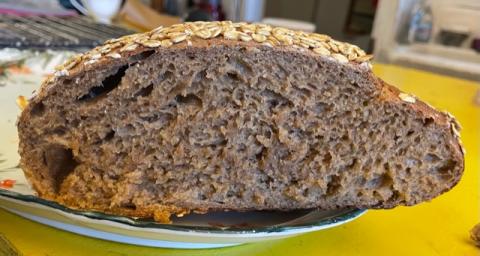 Glad you were inspired to try this and it looks like it came out great.  I like the addition of the oats on the crust.

You’re welcome and congrats on the successful bake!  I agree that the oats are a nice touch.

I just pulled the second loaf out of the freezer tonight so it’s ready for tomorrow. 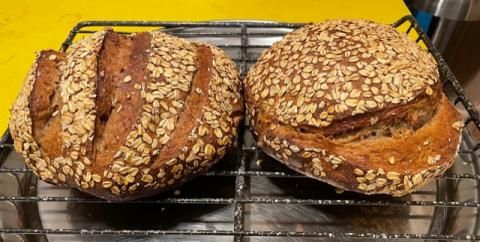