Some thoughts on psyllium husk in wheat breads

Some thoughts on psyllium husk in wheat breads 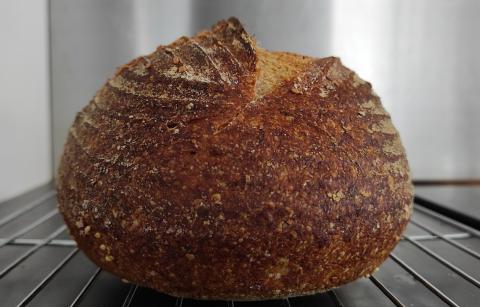 Psyllium husk is usually used in gluten-free or keto style breads where the gel that it forms can act as a binder and helps the loaf to retain its structure without slumping.

For a long time now, I've tried using psyllium husk together with my lower protein flours (around 11.5%) to see if I could make a better bread with these weaker flours and the results have been usually somewhat unclear.

So this post is my attempt to describe in one place some things that I've learnt, both good and bad, about the use of psyllium husk in baking in a non-gluten-free context.

The thing is, you don't need to add psyllium to a wheat bread. The benefit really is that it is a simple way that allows you to dramatically increase the hydration without risk of the dough slumping or baking a flat loaf. The dough becomes super easy to handle, the flow/rheology changes, and the dough holds shape. The crumb retains more moisture to it as well.

What are psyllium wheat breads like, is there an improvement? Initially I was adding around 2g of psyllium husk per approximately 500g of flour, and for these breads the results were unclear. The dough became much easier to handle, but beyond that it was difficult to pinpoint exactly if this was beneficial to the final bread. 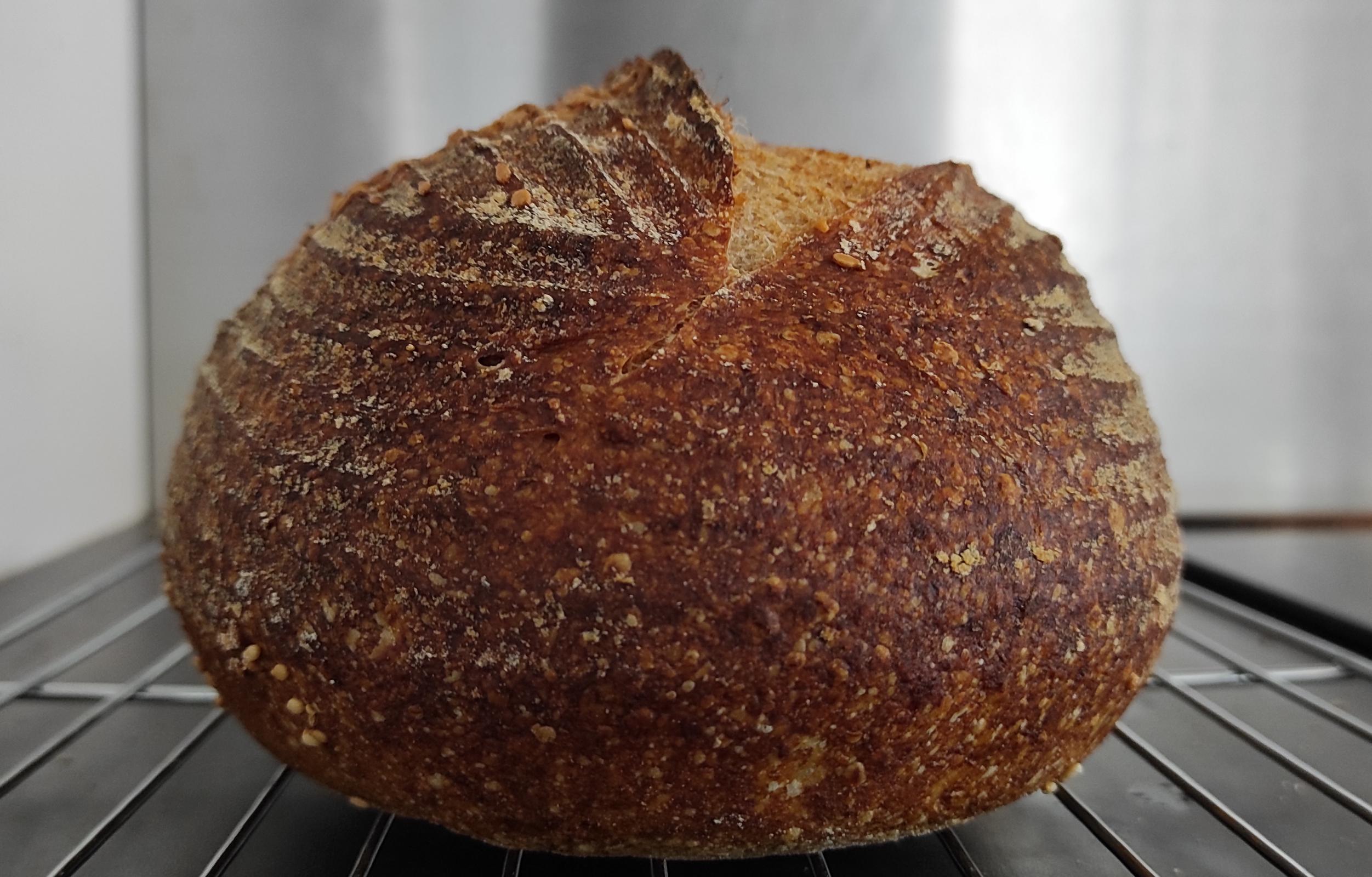 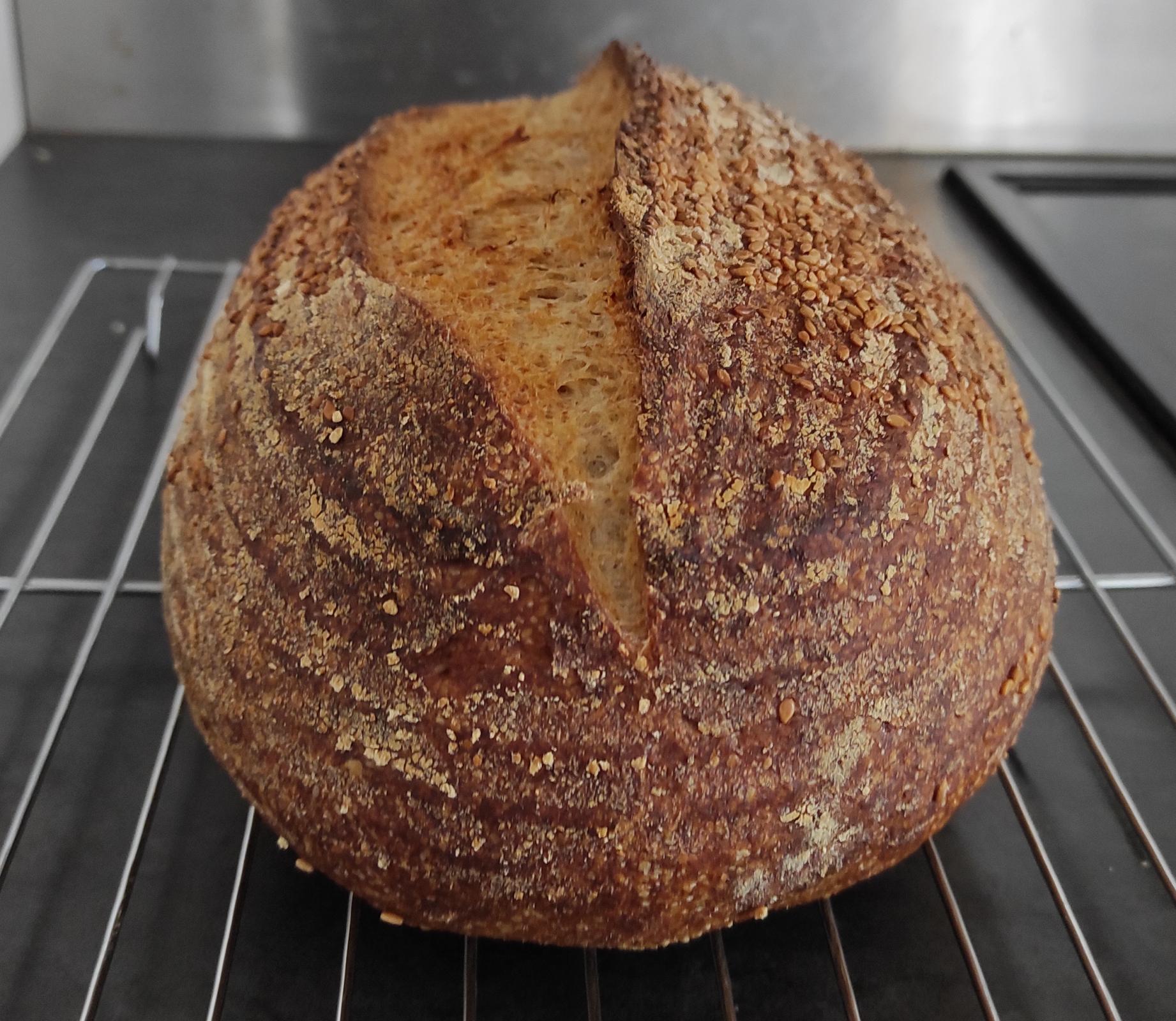 The unnatural looking crumb is visible in the photo above; it must be said though the texture of the bread was quite lovely, soft to the touch and without any noticeable taste change. The shape was good, almost as if the bread was formed in a mould. For this bread the psyllium gel was added at the same time as the levain to the autolysed dough using the dough hook, and the hydration was 87%.

In another, later experiment I reduced the amount of psyllium down to 6g, and wanted to compare adding a psyllium gel versus adding water by bassinage.

Note the Psyllium loaf had 'snail trails' on the surface, or deposits left on the surface from the gel. It also spread at the score rather than lifting the crust to make an ear, and had a softer crust and moister crumb, although the bassinage loaf had a nicer chew. Besides that they were fairly similar breads. The effort to add the psyllium gel addition by hand is a lot easier than bassinage is.

Finally, psyllium has its uses to help with recovery from an over hydrated dough - I had issues with my scale and inadvertently mixed up a dough at a hydration of about 86% which was way too high for the flour used. To recover, I added 5g of psyllium husk into the dough, which stabilized it enough to continue to shaping and it kept its shape without slumping when it came out of the banneton. There were lumps from the psyllium, so the dough was not smooth when worked by hand, but this did not seem to carry through after baking.

Once again there is no ear, and there is an unusual upright shape and way in which the loaf opens up. Interestingly, for this bread, the crumb was noticeably moister even one or two days after baking and quite nice to eat.

Thanks for posting your experimental results. Very interesting.

Great experiments Jon, I really enjoyed learning from these bakes.  I’d never have thought of adding psyllium to non gluten free breads, but I can see the use cases for it based on your bakes.  Thanks for sharing your bakes.

Great experiment and thanks for posting!

Based on your 20g addition rate and the change in crumb (I agree it looks very similar to a gluten free bread), it seems like the psyllium has a shortening effect similar to adding fats to the dough.  I personally like the more uniform crumbs, and I'm seeing an opportunity to get a more sandwich loaf type crumb without the nutritional sacrifices of adding fats and oils.  Is that a fair conclusion?