As you may be aware, Ken Forkish is publishing is new book titled 'Evolutions in Bread' today.

I'm quite excited as I learned a lot from his previous books, especially FSWY.

I thought I'd open this topic to provide some feedback for when I receive the book and do some experimentation,. Would also love to hear the experiences of others as well.

It;s on my wish list. I look forward to your comments.

Amazon has a free sample that can be viewed online, and can be downloaded to Kindle apps.

Here's a link that is coded so that webmaster Floyd receives a few pennies commission.
https://www.amazon.com/Evolutions-Bread-Artisan-Breads-Dutch-Oven/dp/1984860372?tag=froglallabout-20

Thanks. I looked at both the Kindle and hardcover samples. I'm frustrated that the a recipe list is not included in the table of contents on a lot of these books. The HC sample did have the index, so I could pore over it to try and find recipes I might be interested in. I'm always hesitant to buy a book without that info. I have gotten books on interlibrary loan to evaluate; I'm glad I did because some I decided not to purchase.

Thanks for opening this topic, M. I bought the book on Tuesday, the first day it was available at the bookstore. I had promised a friend to bring her some rye bread, but the loaf I made, a volkornbrot with sunflower seeds from the book Living Bread by Daniel Leader, was beautiful but not delicious. So instead of sitting down to study Evolutions' introductory sections on ingredients and equipment, methods and techniques, and levain=sourdough, I jumped right to the recipe 50% Rye Bread in the section titled Same Day Recipes.

I noticed a few differences from my usual methods. The first was the optional inclusion of 100 g of levain to the 500 g of total flour in addition to 3 g of instant dried yeast. Second, the salt and yeast were sprinkled on top of the dough at the beginning of the autolyse; Forkish says, "Do not worry about the yeast coming into contact with the salt; it won't be a problem." He calls this a "persistent myth." Third, he gives instructions for the pincer method of mixing the dough, which I had seen but not tried; it worked great. The fourth difference was that I usually stretch and fold at regular intervals during the first rising period, but Forkish recommends only two folds for this bread, the first fold about 10 minutes after mixing and the second fold within the first hour of a 3-3.5 hour rise. In the rest of the instructions there was nothing unusual for shaping, the second rise in the pan, and baking.

The bread came out fine, a decent rise and tight crumb. If I can figure out how to post a photo, I will. I think this is about the easiest basic rye bread recipe I have used; it's not fussy. I will add some spice to the mix next time (I like a combination of anise, cumin, and coriander) to make it tastier. I really like that it does not require any special equipment, even though I have a lot of special equipment at this point.

The next loaf I want to try is the Black Bread which calls for black rice flour. Does anyone have a source for this?

Black rice is available at many East-Asian stores - Chinese, Korean, Japanese, Vietnamese, and even Filipino.   Though I have not seen black rice _flour_.

I would use a whirly-blade coffee/spice grinder to make flour out of it.  Pass the dry  flour through a tea strainer, about $2 at the aforementioned stores, to remove any bigger chunks that didn't get pulverized.

BTW, if the purpose of the black rice flour is just for coloring, you can get black coloring, plus either a coffee or chocolate flavor using dark roasted wheat or rye malts, available at home beer brewing supply stores.

You can either grind the whole roasted/malted grains (berries) in a coffee grinder and add the powder (which WILL affect the texture of both the dough and bread) -OR- steep/simmer the whole roasted/malted grains (berries) in boiling water to turn the water black, like coffee/tea.  Steeping/simmering will also transfer flavor, but as long as you don't add the spent berries to the dough, it won't affect the texture like ground berries would.

Good idea! My new KoMo mill arrived this month, so I will try grinding my own. I found black rice at Whole Foods yesterday. The baker's percentage of the rice flour is 20%, so I think it adds more than coloring.

Just got the book this morning. Here are the recipe titles.

I have Forkish's earlier book FWSY and the breads were some of the tastiest I have ever made—so I decided to buy this one—even though I have never made sourdough before.  I hope this wasn't a mistake because his maintenance starter is 450 grams which is about twice as much as I would need to bake two loaves of bread a week. I hope I can cut it in half.

is one of the most misleading, annoying things about his books. You don't need anything close to 450g of starter on hand unless you're baking several loaves per week, regularly.

I maintain about 60g or so, in the fridge. When I do my weekly bake, I pull out the starter, feed it twice the day before I want to make the dough (morning and night), pull some out and make a levain and feed the starter the morning of the dough making, then back into the fridge.

He has apparently listened to the feedback in that regard.  From the intro to this new book:

"I was fully into the game at this stage, and my next step was to revise the process for the sourdough recipes from my first book and decrease the amount of waste (extra sourdough that you throw away). The result is a method to make up a new natural levain (sourdough) culture that calls for only a small fraction of the flour that the Flour Water Salt Yeast levain used."

I don't have the full book, I just got the free sample.

It was one of the things I ran into with new bakers on another forum - people ending up with 2kg of discard and wondering what the hell was going on.

I found a lot of good information about maintenance on page 66 of the book. Although he doesn’t say so directly, I concluded that it is OK to reduce the maintenance amount of the 450g of levain because it should be strong enough to handle it.

I am going to start creating my starter in the next few days and do it like he says, make some bread with it, and see how it goes. It does sound convenient to have a couple hundred grams of the starter ready to go for weekly bakes. In the meantime, I am going to try some of the same-day recipes since the levain is optional—but he does say it improves the flavor.

I just finished making the “Standard” recipe from the Same Day Breads Section. It has a little bit a wheat flour, but is mostly white flour and it turned out to be more tasty than I expected—and I didn’t even use the levain starter—because it isn’t finished yet.

I followed his directions except I used 72° room temperature water because all my bakes have been proofing so fast lately. So instead of a first rise of 3 to 3 ½ hours it was 4 hours. I am going to make this again and will follow his temperature requirements to see what happens. 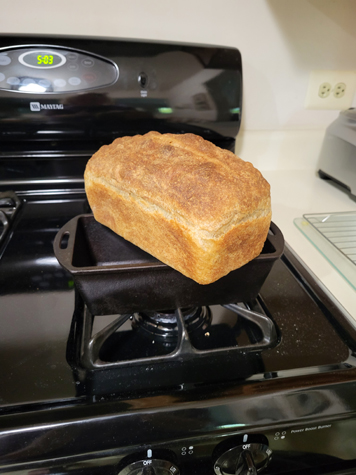 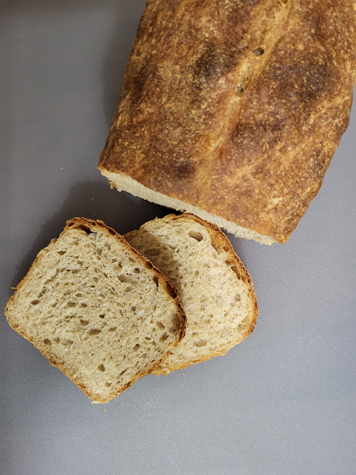 Here is my first loaf from Ken's new book :)

I decided to do something crazy and made a 1.5 kg loaf from Ken's 'Standard' Loaf recipe :)

In term of taste, its a pretty neutral bread. Got some sweetness to it and would be a good everyday loaf to be honest. Maybe its because of the bread still being hot, but I couldnt quite taste the levain in it.

Some pics for you :) 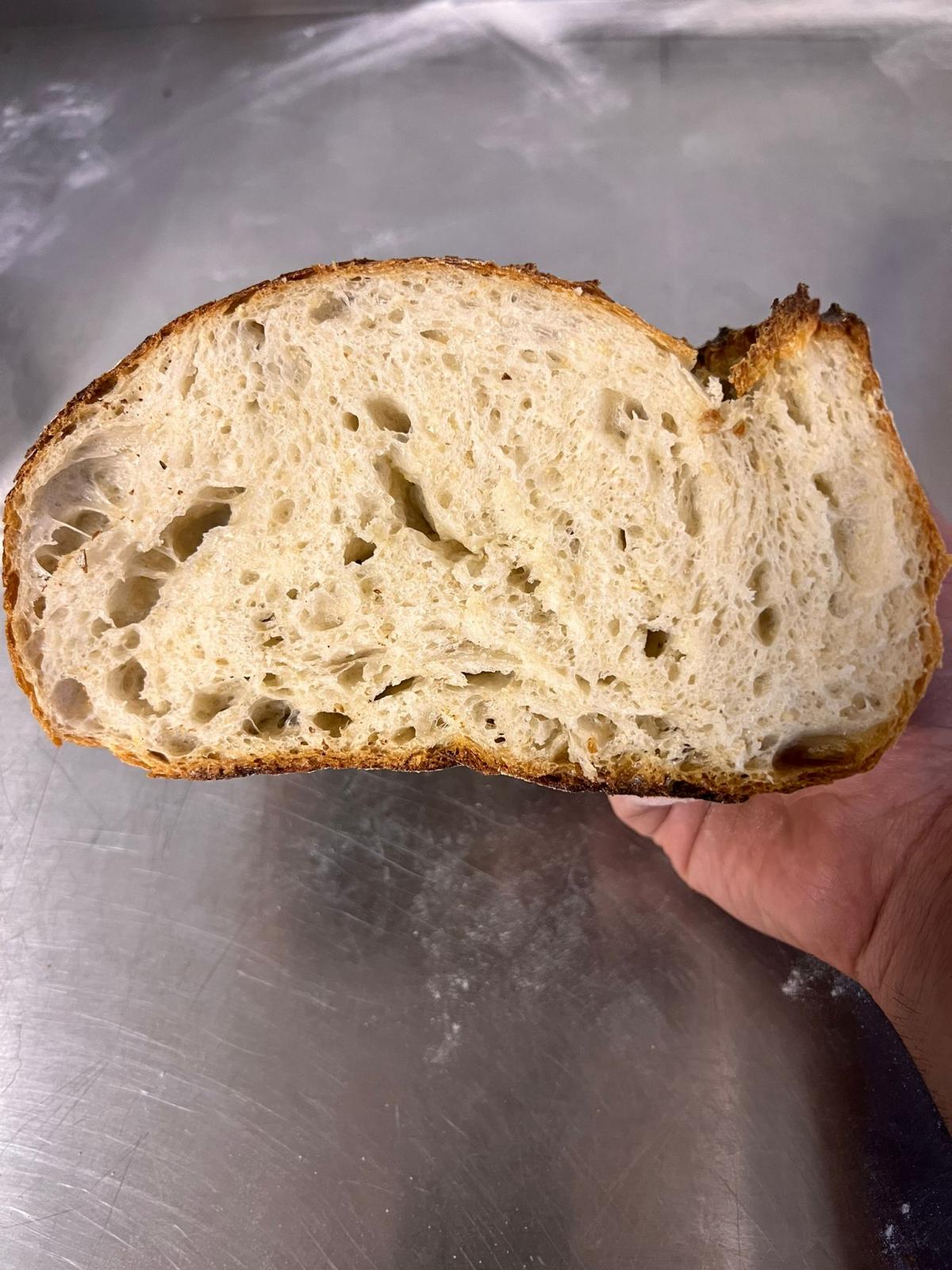 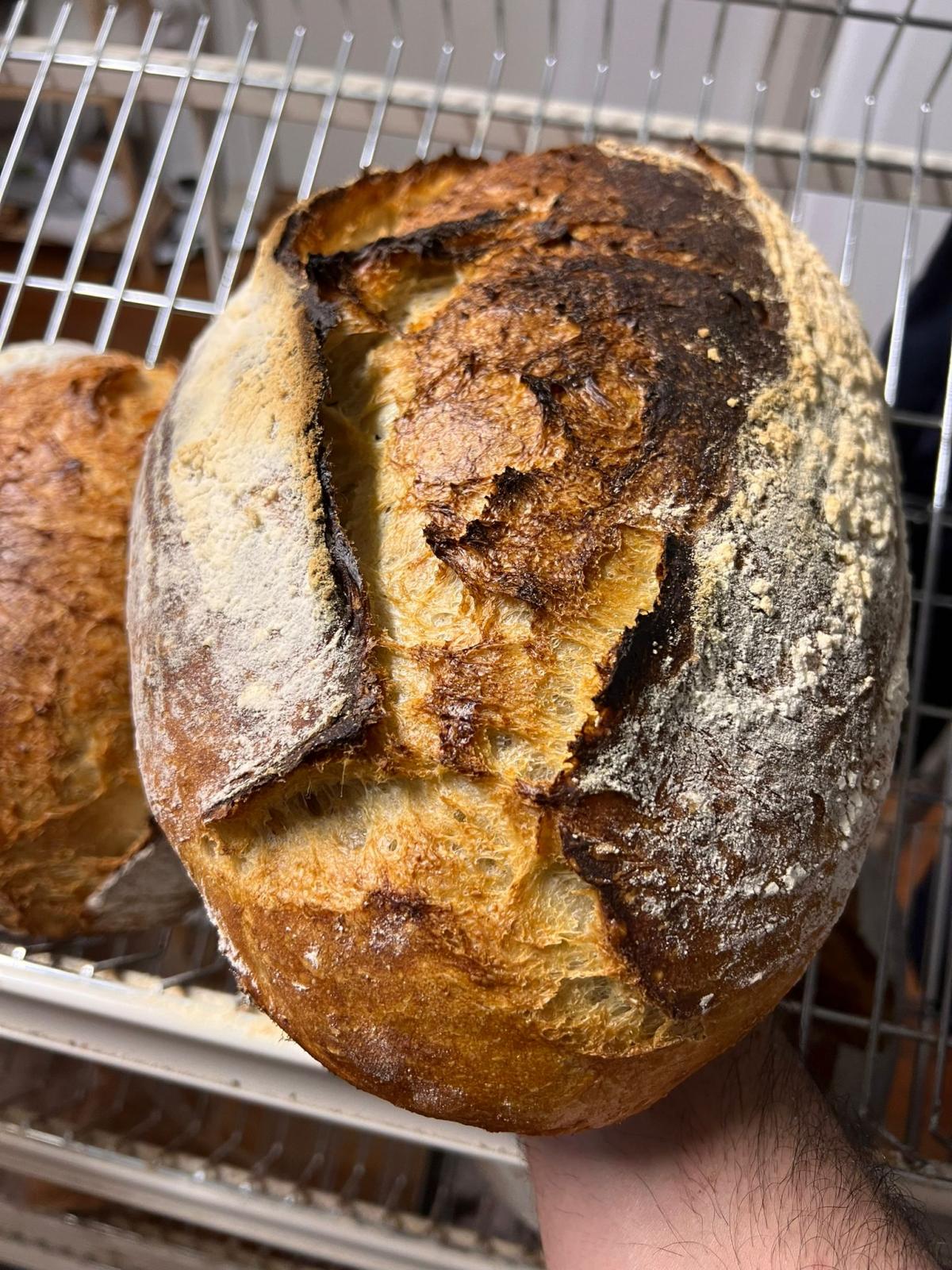 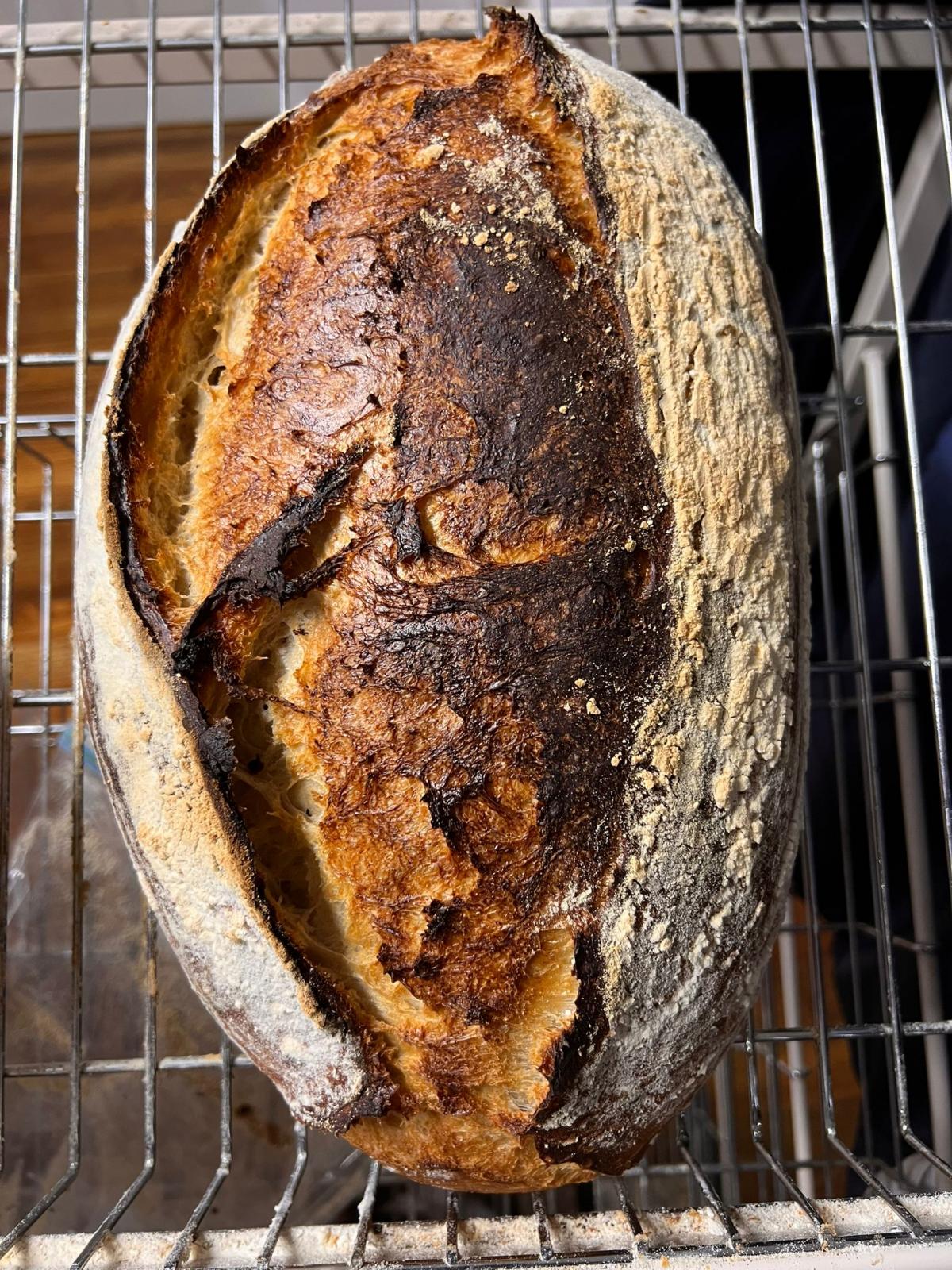 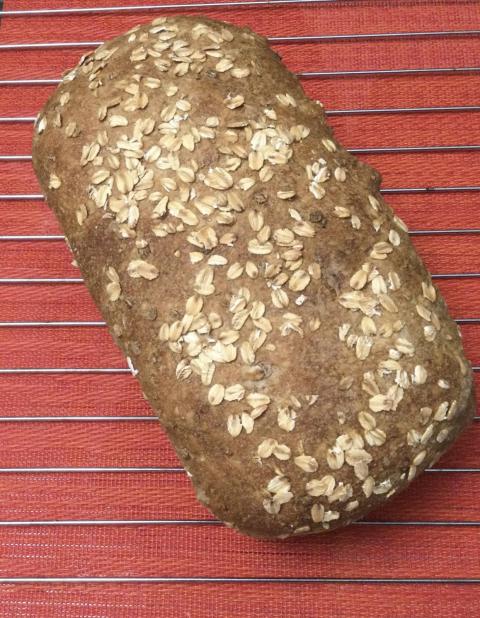 I bought Forkish’s new book Evolutions in Bread, since his first one W,F,S,Y has been my bible on making sourdough breads with excellent results every time I thought it was worth trying this new one.

The first thing I noticed is the change in the method to mantain/feed the starter. No more wasting pounds of flour by discarding huge amounts of starter at every feeding, even when I had quickly made my own modifications of the quants in his first book so not to waste so much I think it is good that he listened to people’s comments about it and came up with this new way of doing it.

I also like the fact that almost all of the recipes in this book will work whether they are baked in a loaf pan or in a Dutch Oven.

So far I’ve made only one of the breads, the Multigrain Bread, and I’m pretty happy with the flavor and crumb.

I made Black Bread yesterday. I ground the black rice in my KoMo Mio to get the black rice flour. I wasn't able to buy a single bottle of Guinness stout, so rather than buy a 12-pack I used chocolate stout instead. I followed the directions exactly, and the bread also looks exactly the same as the picture on page 110. I baked it in a 4x9 Pullman pan, my first loaf ever baked with a lid, and I was pleased that It came out perfectly. The bread is not sweet at all and is a good complement to butter, egg, and cheese. I would post pictures but the bread is just crumbs now!

This makes the second recipe I've tried, and the instructions have been quite reliable. I look forward to branching out into the Overnight Col-Proof Recipes.

Baked the Overnight Standard yesterday but used a Pullman pan. Very pleased with the result, although I might bake it for only 45 minutes to get a softer crust. 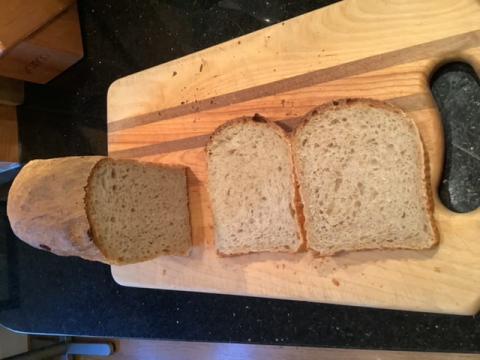