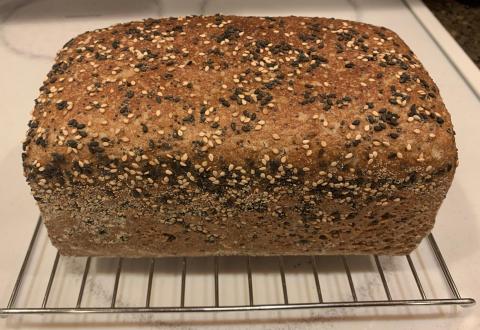 I've been on a bit of a whole grain kick lately, and after a brief back and forth with Dave, I decided to give his 97th Bake a try.  Let the fun begin!

I converted his recipe to my standard 450g flour, and other than a few deviations, I followed his method as outlined in his post.  My only deviations...  I didn't have hard white wheat, so I substituted with hard red.  I didn't have whole coriander or time to toast the spices, so I used 2.5g ground coriander, 3.5g fennel seed, and 3.5g caraway seed.  I didn't have time to grind the flaxseed or chia seed, and based on Dave's observations about the bread drying out, I made a soaker with the flax/chia seeds using 150% boiling water.  Finally, I skipped the chia seeds in the topcoat.

While weighing out the ingredients, I thought the bread spice mix would be overpowering, but it doesn't appear so on the baked bread.  The fennel is definitely noticeable, but it doesn't seem over the top.  Looking forward to the taste test tomorrow!

At mixing, I made a rookie mistake #1...  I followed Dave's hydration verbatim and didn't contemplate the differences in our flours.  I used a blend of Glenn, Red Fife, Turkey Red, and Warthog from Janie's Mill.  It was great after the saltolyse, but the additional hydration with both leavening sources plus the soaker put it over the top.  The dough was extemely slack and sticky.  Rookie mistake #2...  I was stubborn and thought I could work the hydration into the dough.  A couple of tablespoons of flour would have gone a long way...  During folds, the dough would start to firm up and lose its stickiness but would go slack and get sticky by the next fold.  If I hadn't ground the grain myself, I would have bet good money that this was an 80% rye bread instead of 20%.  Next time...  I'll start at 73-75% hydration and bassinage in extra hydration as needed.

Shaping was "interesting"...  I did my best to handle it with a little extra flour.  Couldn't get any strength into it with folds.  Finally had to get a little tension into it by using my bench scraper and shaping a boule for about 10-12 quarter turns.  It was just enough to wet the surface and roll the dough through the seeds for the top coat.  Flopped the dough into the Pullman and crossed my fingers.

The dough was so slack, I didn't trust the poke test.  So, I let it go in final proof until I had a good rise and always watching for pin holes in the surface.  After 3.25 hours, it to was within an inch of the lip and hadn't formed a pin hole.  I didn't want to push it any further and moved to baking.

The bread has a nice aroma and formed a crisp (but not thick) crust.  Even though I didn't get a pin hole, I think it overproofed and I'll have caverns under the top crust.  That said, it smells really good and can't wait till breakfast! 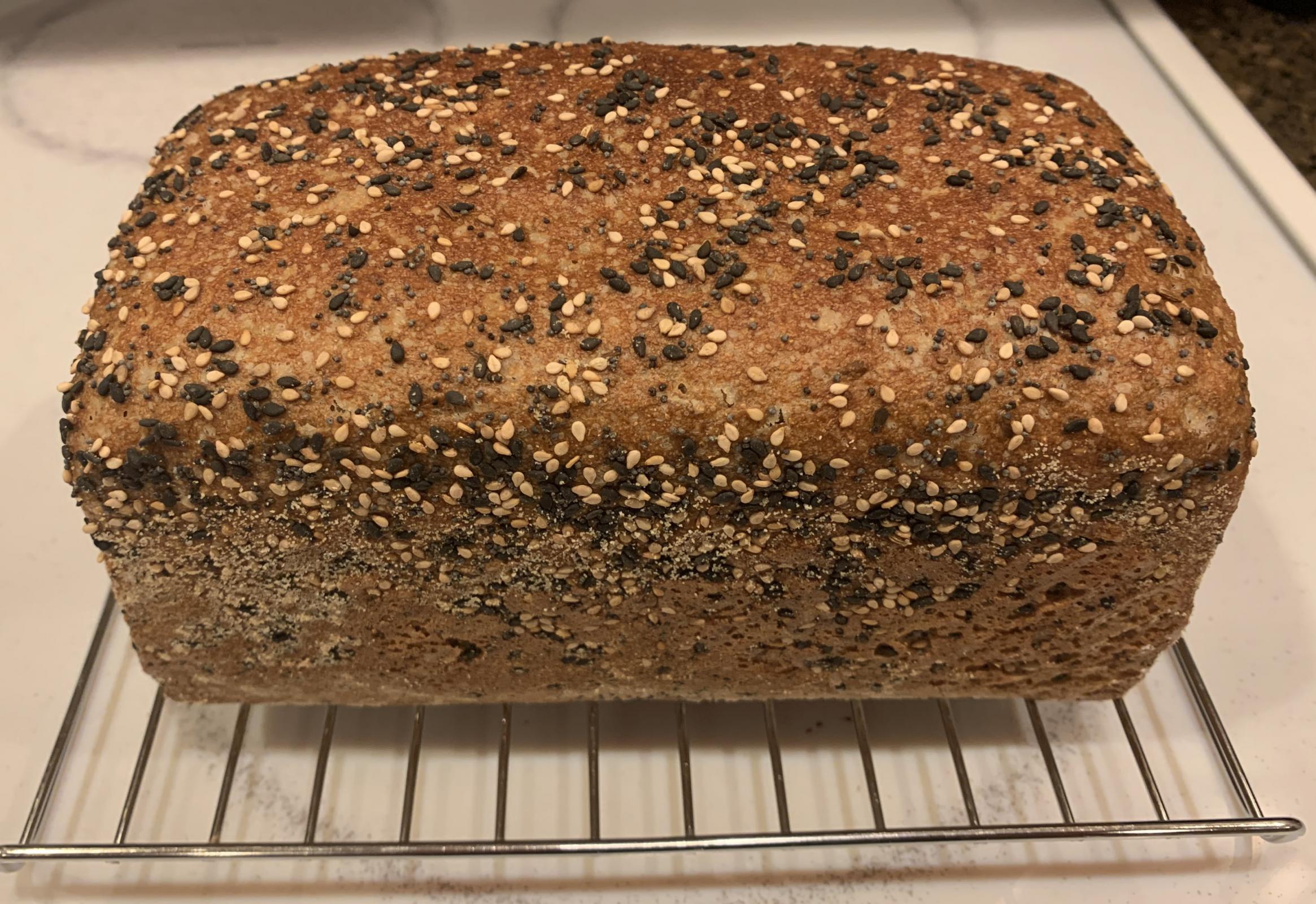 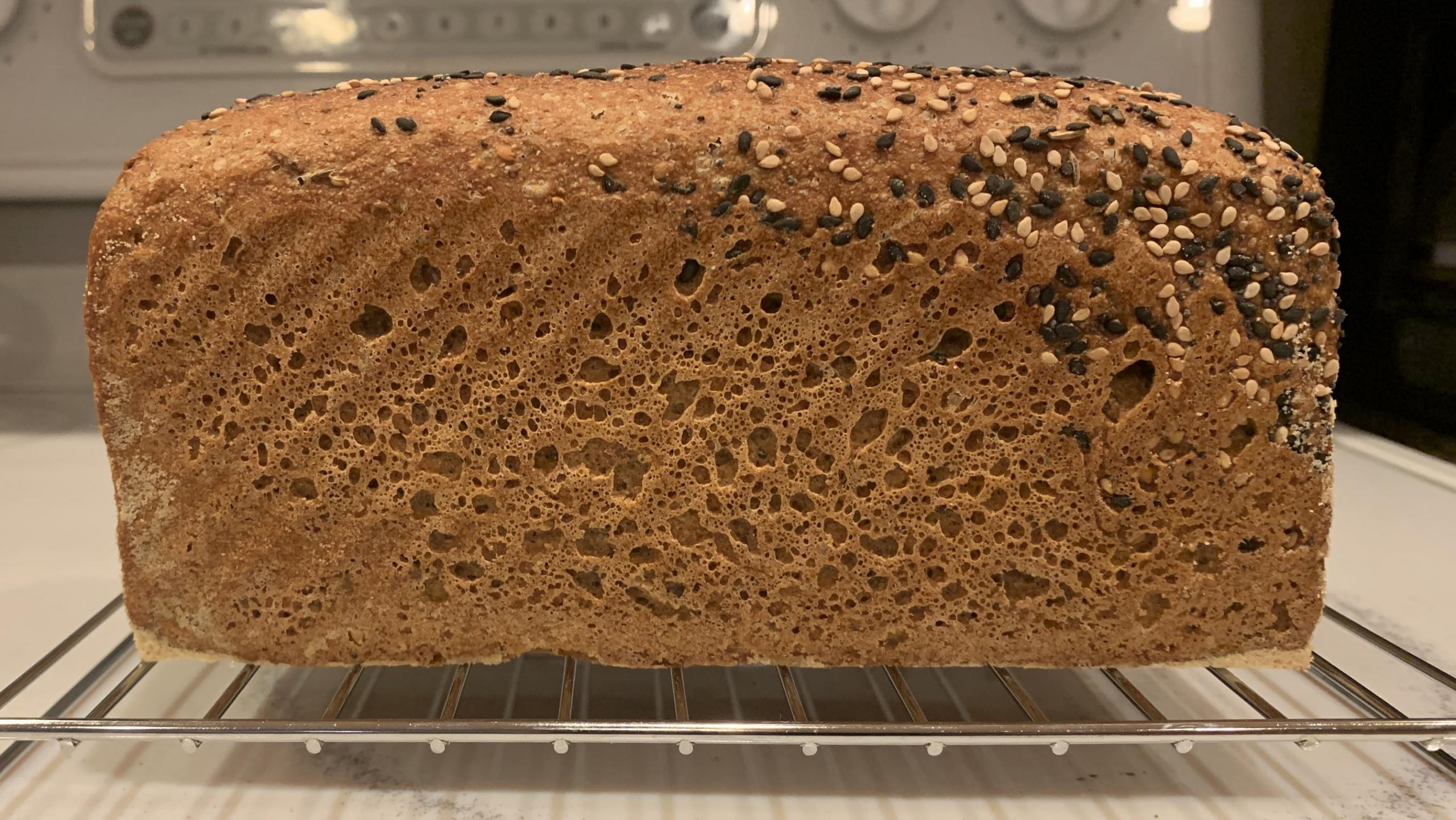 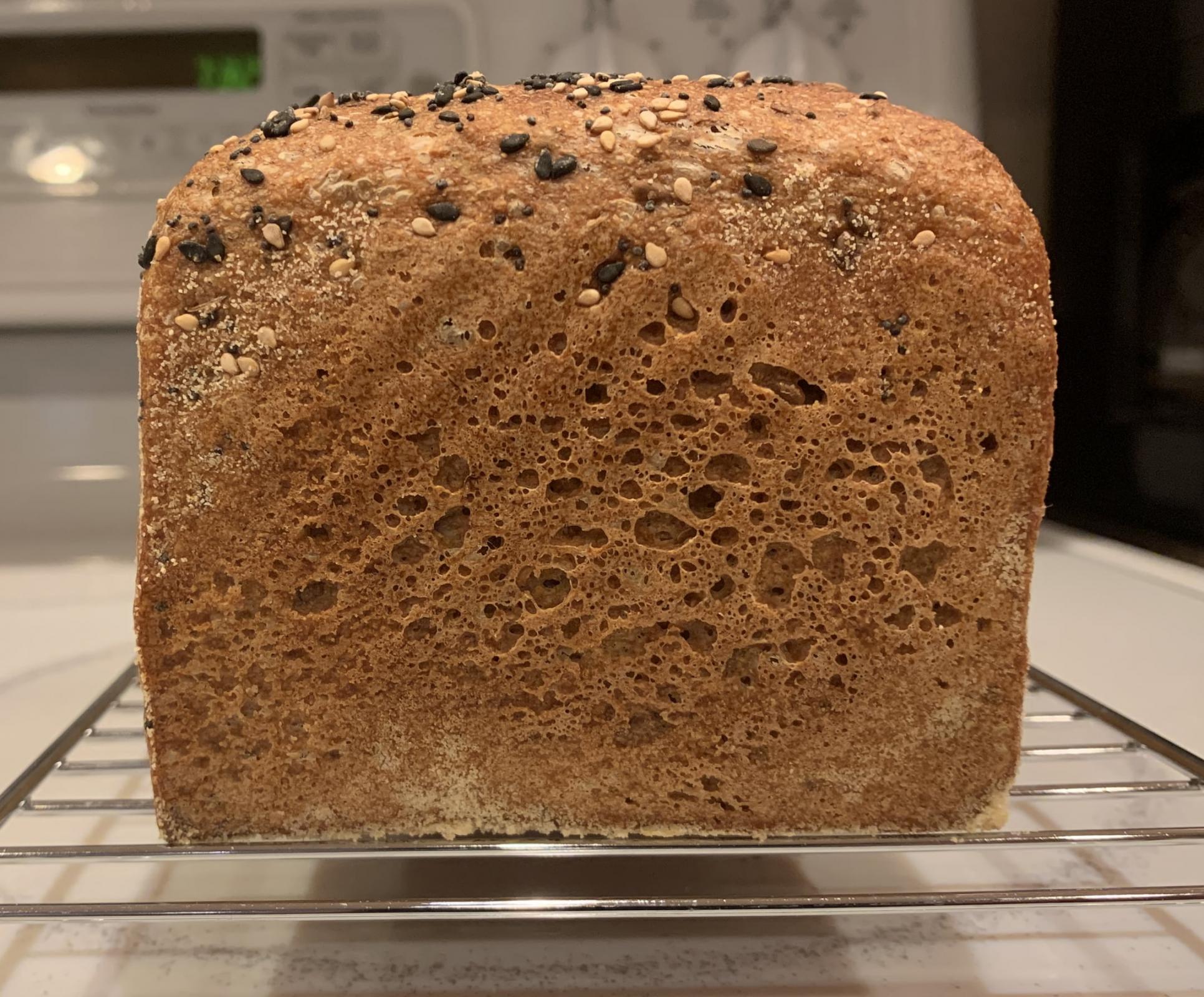 Also, why is there 645g of porridge in the final dough, what is that porridge made of? It's just the saltolyse with a small amount of chia/flax soaker right? Confusing it is, Yoda.

The risk of copying and pasting another recipe instead of starting with a blank form. 😁

Change porridge to soaker in the column heading.  My spreadsheet is set up to account for any auto/fermento/saltolyse in the top section of that column and any soaker/ad in/porridge in the bottom section.  So, the combined weight of the saltolyse and the soaker is 645g.

Will post a crumb shot as soon as I slice it.

Handsome loaf with a great seeded crust Troy.  Looking forward to seeing the crumb and hearing your tasting notes!

Thank you Benny.  Can’t go wrong with a seeded crust!

A little cavern, but not nearly as bad as I expected.  The crumb is still quite moist and maybe a bit “fragile”.  It reminds me of a high rye or gluten free crumb.  Guessing that’s due to over hydration?  I also wonder about using that much fresh milled flour without letting it oxidize.  I need to re-read that section in Hamelman’s Bread to better understand the impact on gluten formation.

This bread tastes great!  I didn’t prepare the bread spice the same as Dave and will need to do that next time.  I don’t really get a sense of the coriander or the caraway, but maybe I’d miss them if they weren’t there.  The fennel is present but not at all overpowering.  A good whole grain flavor and a nice blast of sesame with every bite of top crust!  It toasts up nice and crisp and went great with my eggs. 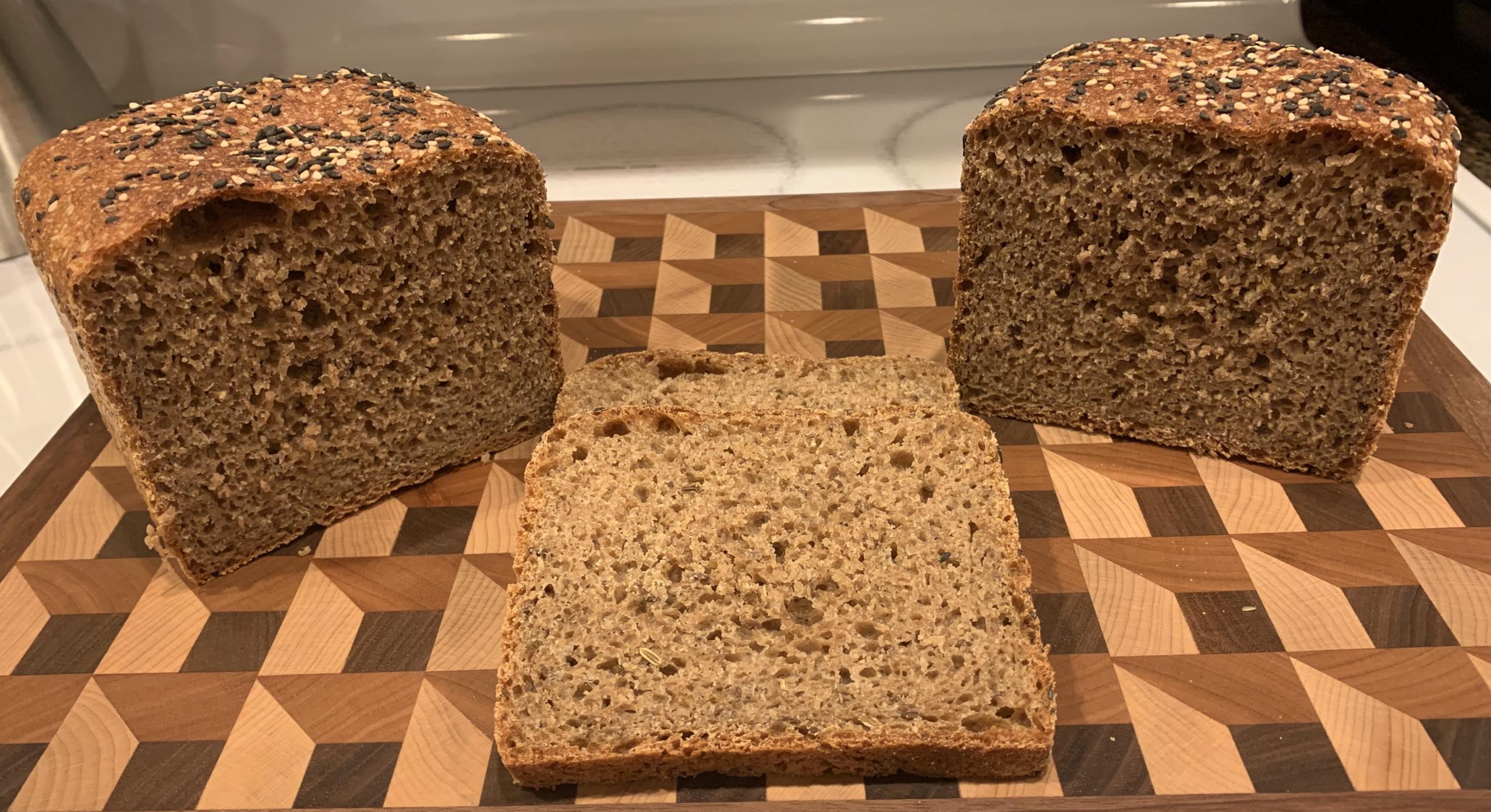 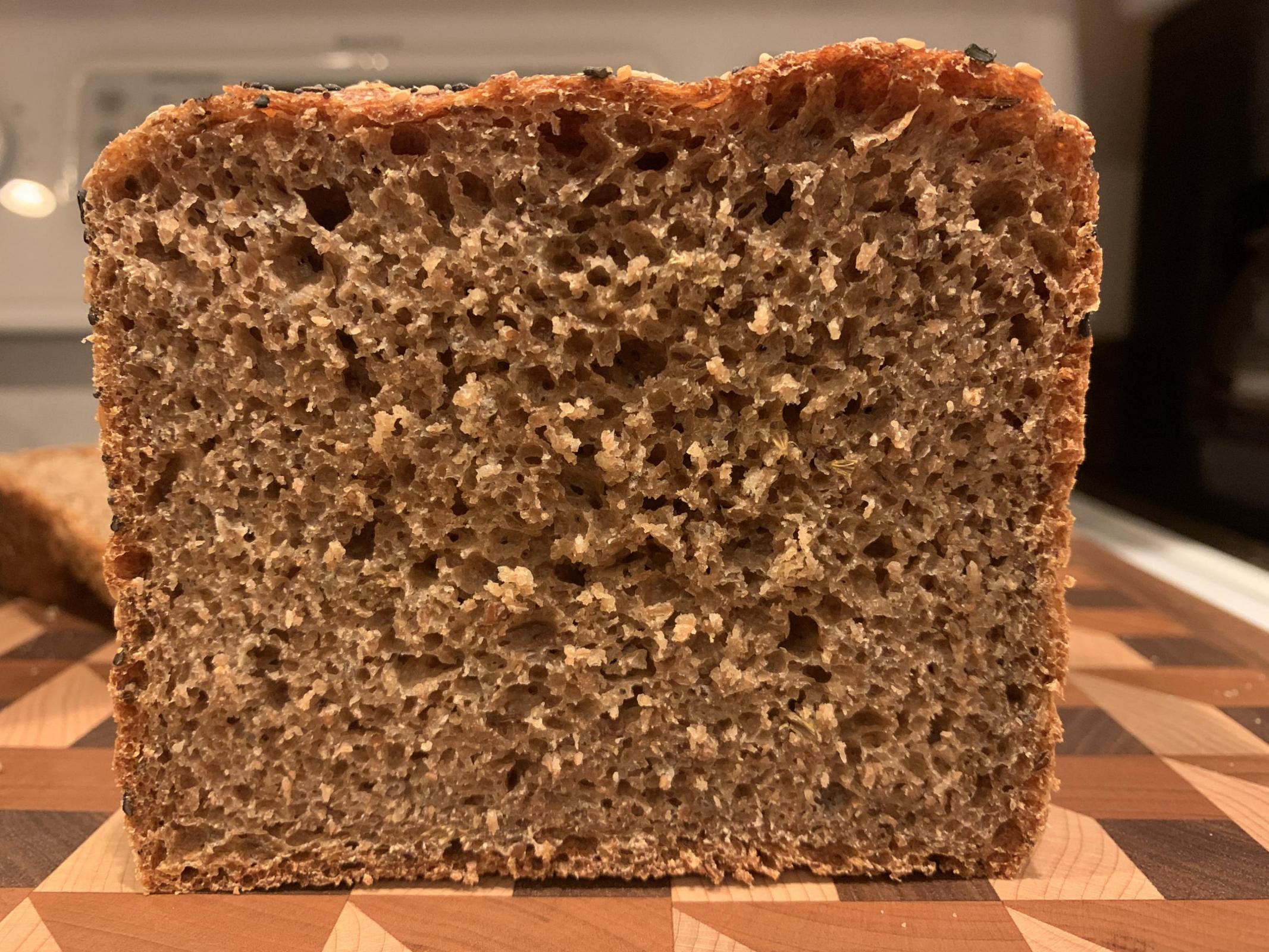 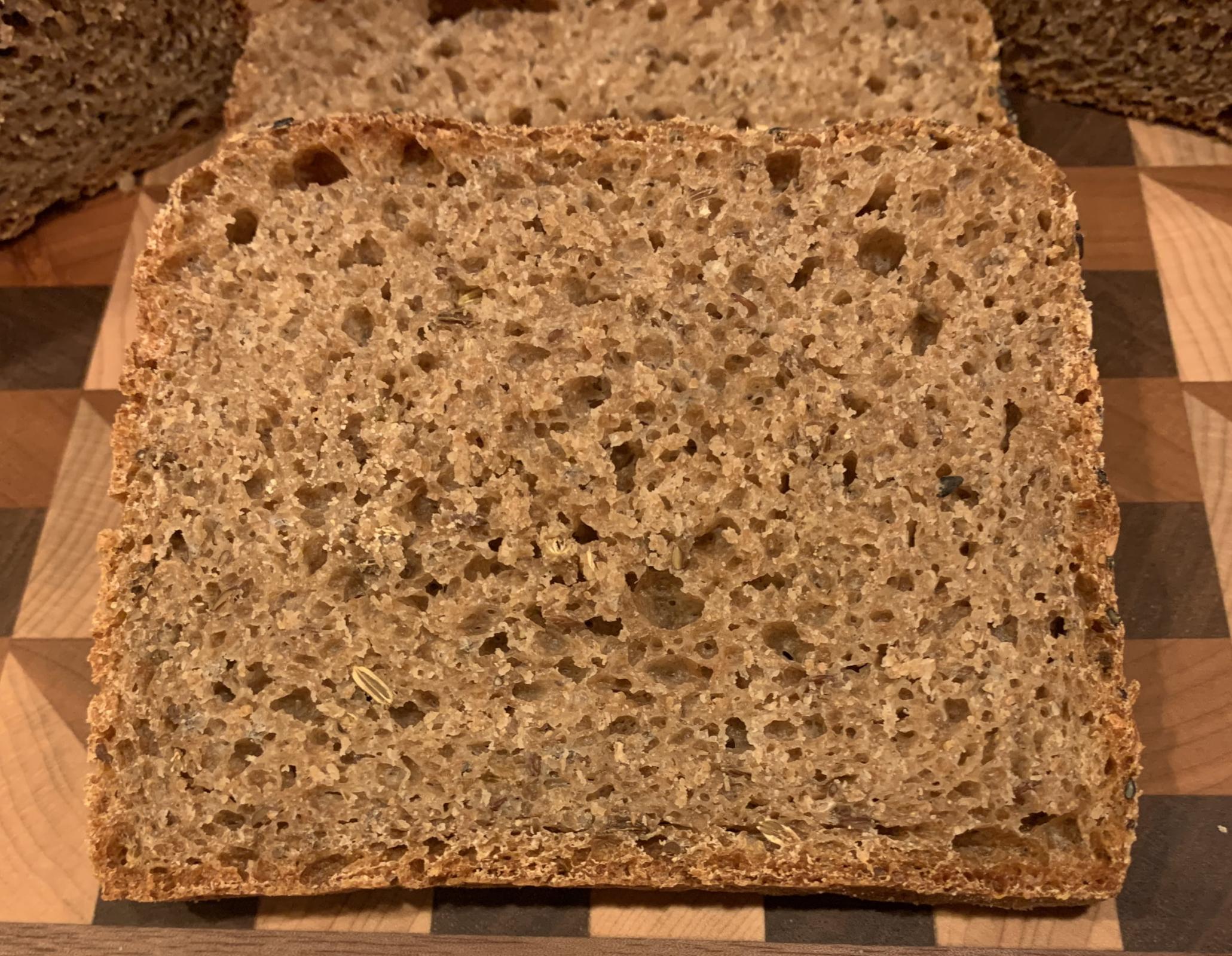 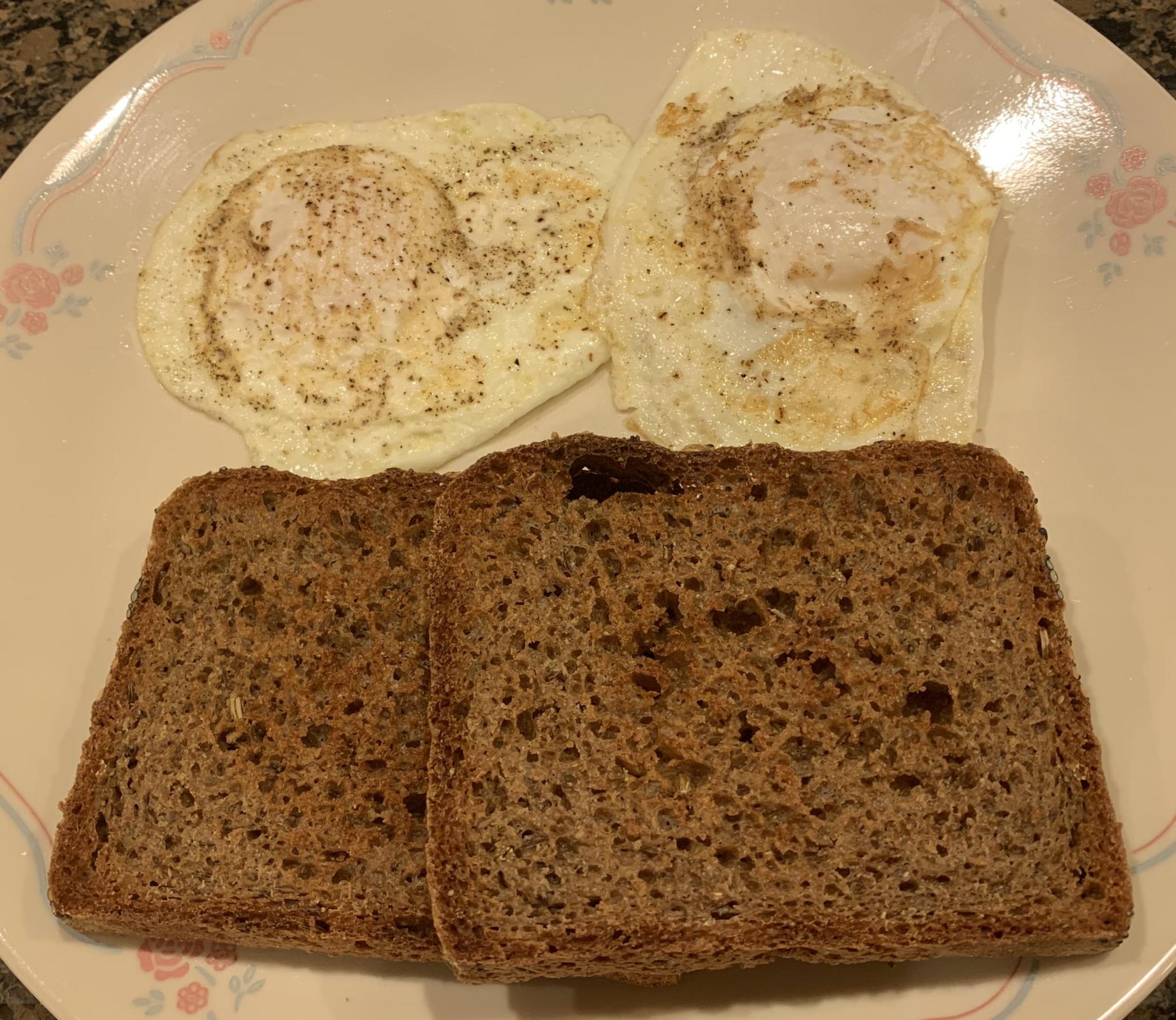 Looks great Troy and sounds like it was delicious.  That hole just looks like a fermentation bubble to me, very nice bake.

I am extremely flattered and honored.

I should have mentioned that my "fresh milled" flour was likely a bit dried out, as I had stored the whole berries in the fridge for maybe 6 months (at least), portioned out into 1/2 pound baggies, and had just procrastinated milling it.  I did mention that it had been vacuum-packed before that, since 2008, but I failed to mention the sealed pouch used iron powder oxygen absorbers (which also take in moisture) as opposed to a mechanically induced vacuum.

No worries!  Using a new flour blend (just got the Glenn and Warthog berries) without even looking at how thirsty it was is all on me.

It was a fun bake.  I normally don’t use the ADY in combination with starter, so it was good to try something new.  I did bulk in my basement at about 72 deg F to try and slow it down a bit and extend bulk.  Bulk fermentation was about 4 hours and final proof just over 3 hours.  Next time I’ll lower the hydration to match my flour and toast the bread spice.  Should be a winner!

A cheaper alternative to the mylar/foil pouches are plain ol' 2 liter soda bottles.  Rinse and dry thoroughly.  Fill halfway with cleaned wheat berries (I hand sort to remove all broken kernals, blackpointed kernals, and any other damaged/diseased berries), put in an oxygen absorber, fill the rest of the way.  Then tap and shake to firmly pack the berries, adding more berries by hand to top it off.

Get the bottle as firmly/densely packed as you can in about 1 minute,  and seal with the cap, because the oxygen absorber starts to get "used up" as soon as it is removed from its sealed package and hits air.

Within an hour or so, you will see that the sealed bottle has "pulled a vacuum" by the iron powder in the oxygen absorber taking in H2O and oxygen.