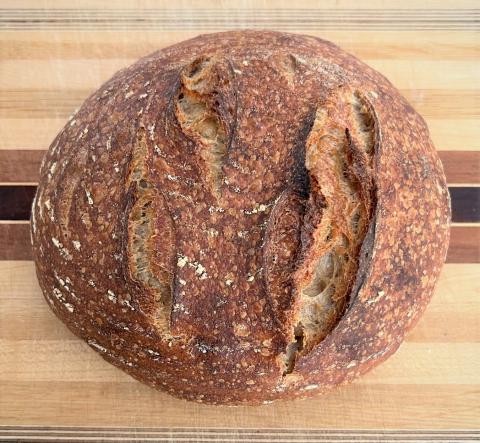 A place where I order rye chops also has emmer flour, and I decided to get some.  Looking for a recipe, I found one on TFL by leslieruf.  By and large I followed his description, although there were a few fairly minor differences.

Instead of a starter build, I simply used 50g of my starter combined with 50g of bread flour and 50g of water for the levain the night before.  Overnight this did the usual of turning into a frothy bubbly mixture.  The next morning I put emmer flour (113g), bread flour (262g), and water (250g) into my 6-quart Cambro tub and worked them into a unified mass, which sat covered for 45 minutes.  The next step was to add  most of the levain (125g) and a small amount of salt (6.75g).

Leslie used a mixer, but I opted for working the dough by hand.  After a few minutes I had merged the levain and salt into the flour and water mix sufficiently that I felt comfortable dumping the dough onto a granite countertop on which I did 125 French folds (eighty-five and then a pause for a minute or two before the remainder) to build some gluten and strength.  The kitchen was 72F, and the dough temperature was 74F.

This is a soft dough (as Leslie described), not quite like ciabatta dough but tending in that direction.  Four stretch-and-fold sessions followed at thirty minute intervals, and the dough did gain strength during that process.  An hour after the fourth S&F I gave the dough another S&F and thereafter left it to sit while it expanded a bit and showed the presence of some bubbles.  For this I looked not only at the surface and sides but also lifted the container and looked at the bottom, which I have found to be a reliable way to judge the growth of bubbles during bulk fermentation.  Total time for the bulk fermentation was exactly five hours.

The dough went back onto the granite countertop for a pre-shape.  Leslie had omitted this step, and I felt that 20 minutes was about right given the extensible nature of the dough.  Shaping into a boule was straightforward, but I needed to flour the top surface and my hands to keep the dough from sticking during that process.  Next time I will also be sure to flour my banneton sufficiently.

The banneton went into a plastic bag and then into the refrigerator for an overnight proofing, which lasted a bit over fifteen hours.  The dough had expanded a little overnight and was sticking to the sides of the banneton more than dough usually does (hence the reminder to flour the banneton a little more next time).  The dough was also a challenge to score as can be seen from the top view photo.  Nonetheless, I managed to get the dough into the Dutch oven and placed into the 465F pre-heated oven.  After 15 minutes I removed the lid, and the total baking time was 42 minutes.

The loaf weighed 649 grams, has a nice soft but chewy crust, and has a pleasing crumb.

Here is another view of the crust. 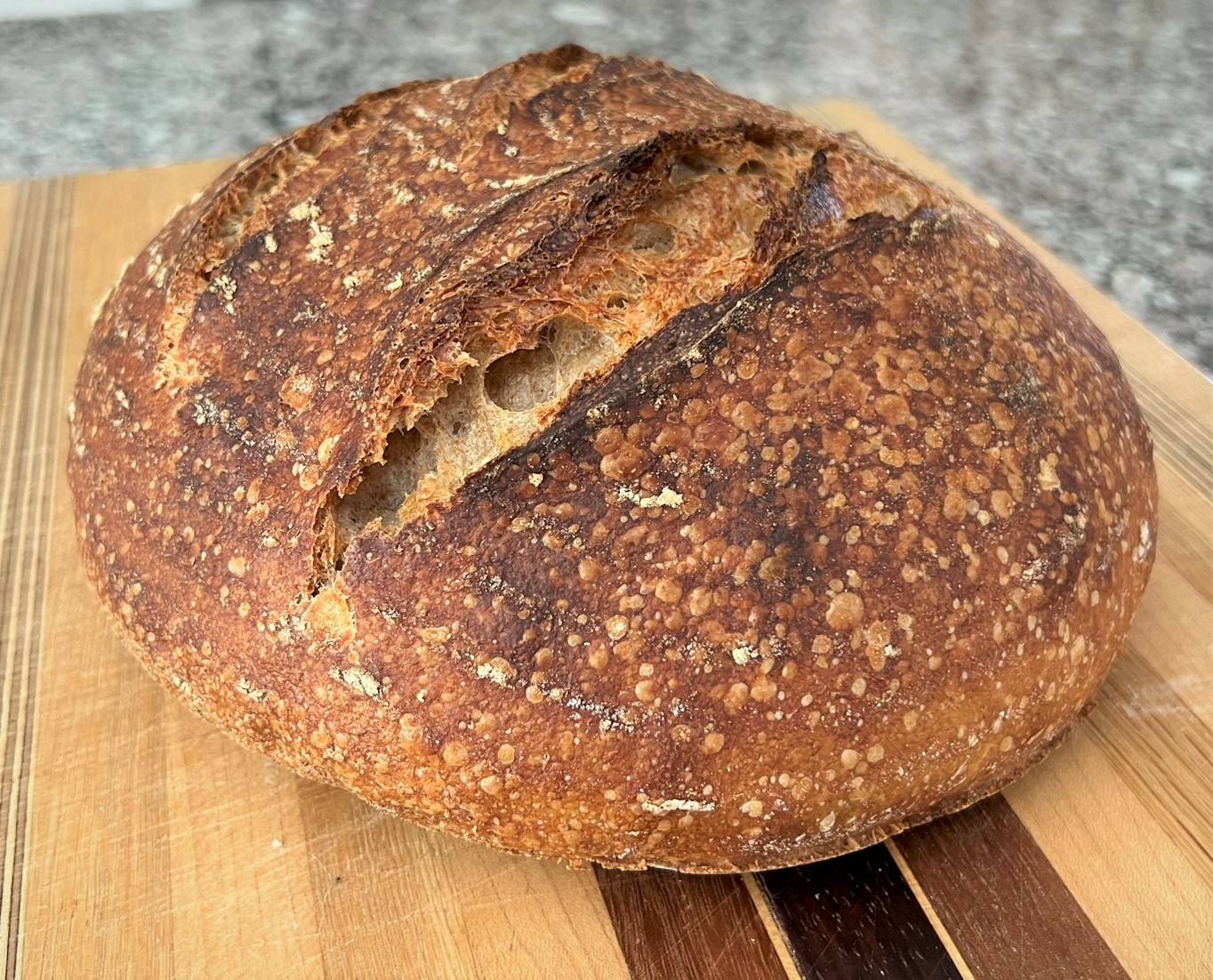 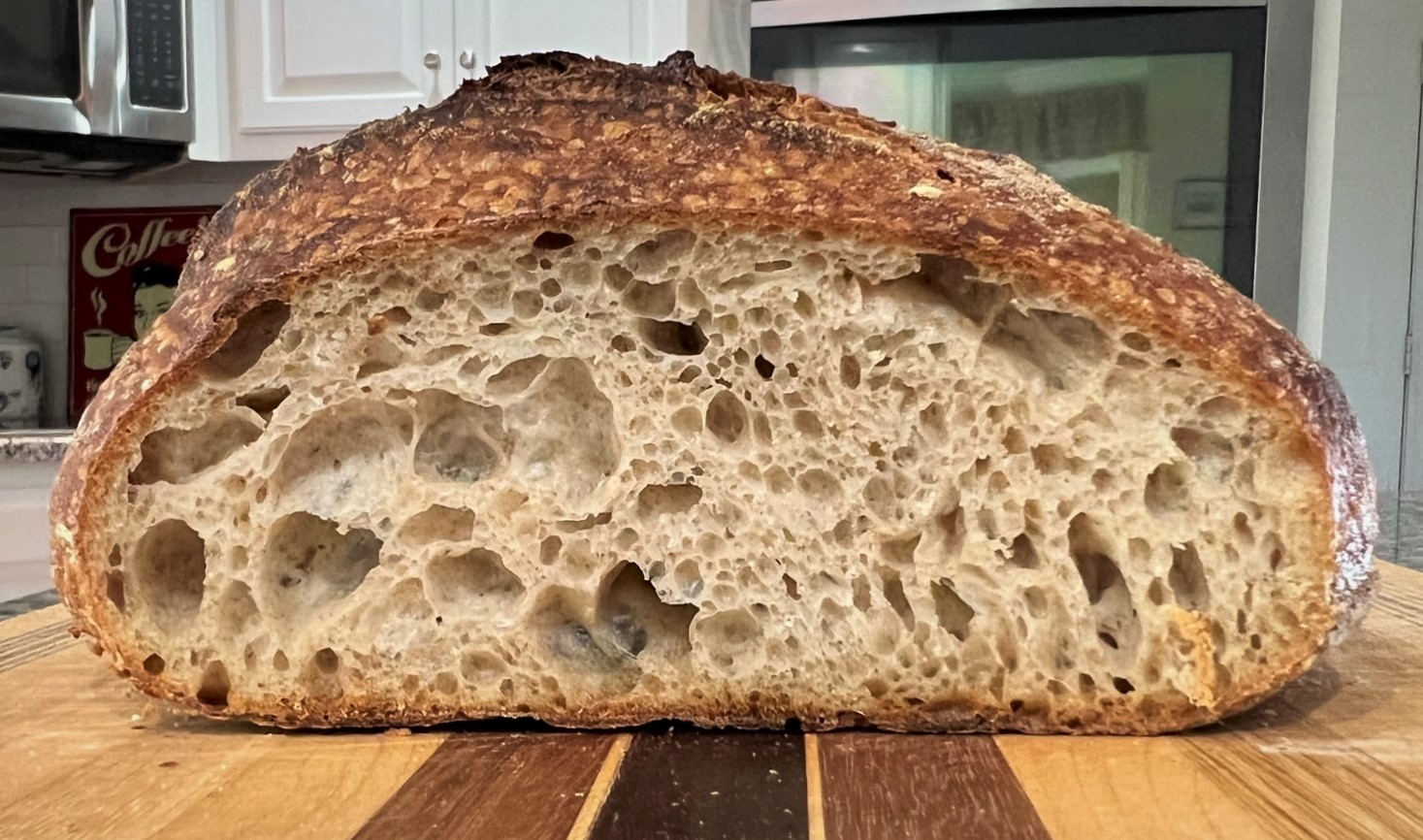 Leslie remarked in his post that he could not really detect the emmer flour at 30% of the total flour and felt that more the next time might change that.  I agree, but the next time in addition to slightly increasing the portion of emmer I will likely also slightly decrease the hydration.  This recipe is about 71.4% hydration, and given the nature of emmer I am wary of reducing the gluten and strength provided by bread flour without also adjusting the amount of water.  (Leslie, did you bake this bread again with any alterations to your first bake?)

This was a nice alternative to my typical bakes, and I will definitely try it again.  Thanks to Leslie for posting his bake and giving me the opportunity to try a bread with emmer flour.

Handsome loaf Ted, the crumb is beautifully open and you also had great blisters on the crust.  I haven’t had the pleasure of baking with emmer, it isn’t easy to find here.

Thanks for your kind words.  The crumb surprised me.

I ordered the emmer online from a seller in New York.  Not sure whether they ship tp your locale.

my apologies- I was AWOL for a few days (I popped across the Tasman Sea to Sydney to finally see my grandchildren after 3 long years of Covid!,) I will have a look at my recipes - offhand I don’t remember.  I bake a lot using a mix of flours and this frequently includes Emmer.  It is expensive to buy and not easy to find in NZ, the one I buy comes from Australia!,  I will report back probably tomorrow.   Thanks for trying this though, pleased you did!

A bit of a giggle here,  I am female! 🤣 my parents just spelt my name the “wrong” way.  it happens from time to time 😊 bake happy Ted

No worries about the delay in your reply.  Sorry about the pronoun mix up.  The price of the emmer I got was higher than other flours from the same place.

Let me know if you find any notes from bakes with emmer that indicate a higher portion.  I will probably boost the percentage of emmer at some point and bake this bread again.