By ‘combo’ I refer to using both yeast and sourdough starter as leaveners plus these couple of techniques mentioned below:

This is done by diluting the yeast and salt used in the recipe in water (8-10% brine) and letting it stand at RT for ~1 hour. Advantages of this technique can be found here for instance.

Explanation of this technique devised by ‘SteveB’ can be found in his website breadcetera. It rests on a logical base and thought to include it here in my combo experiment. An additional gain of this technique comes from the fact that the sourdough starter gets thoroughly dispersed in the batter and so kneading of the final dough is kept to a minimum.

In place of sourwort or acidulated malt, this time I used sourdough. Few words though about this old acquaintance of mine. ‘Yoyo’ (bcs it goes up and down, that’s all it does!) was created spontaneously about 8-9 years ago and since then had its ups and downs figuratively and literally. Sometimes maintained with love and devotion (for a short period it was even fed every 6 hours round the clock) using the best of materials I could provide. Other times neglected letting it starve in the cold or mistreated by feeding it randomly with whatever leftovers happened to lie around. Most times using a scale to refresh it, fewer eyeballing it. But after each occasional abuse it kept coming back alive and strong, stubbornly refusing to depart. My last major abuse towards it was to park it in the freezer (-18C) a couple or so years ago and follow other endeavors in home baking (plus moving into a new place). Recently though, the frozen ‘mummy’ has awakened! Within a week or so of close attendance the mummy was resuscitated back to life becoming  a playful yoyo once again, an 100% rye starter now maintained like so:

Refreshed once a day with equal weights of water and whole rye flour, held at 18C|64-65F. Keeping it consistently at this temp (my wine cooler does an excellent job at that throughout the year) allows me to concentrate on the rhythm of the starter, having to worry only about the refresh rate (since everything else is held constant). So it’s been gradually tuned to fit into my life style instead of the other way round (both happy). 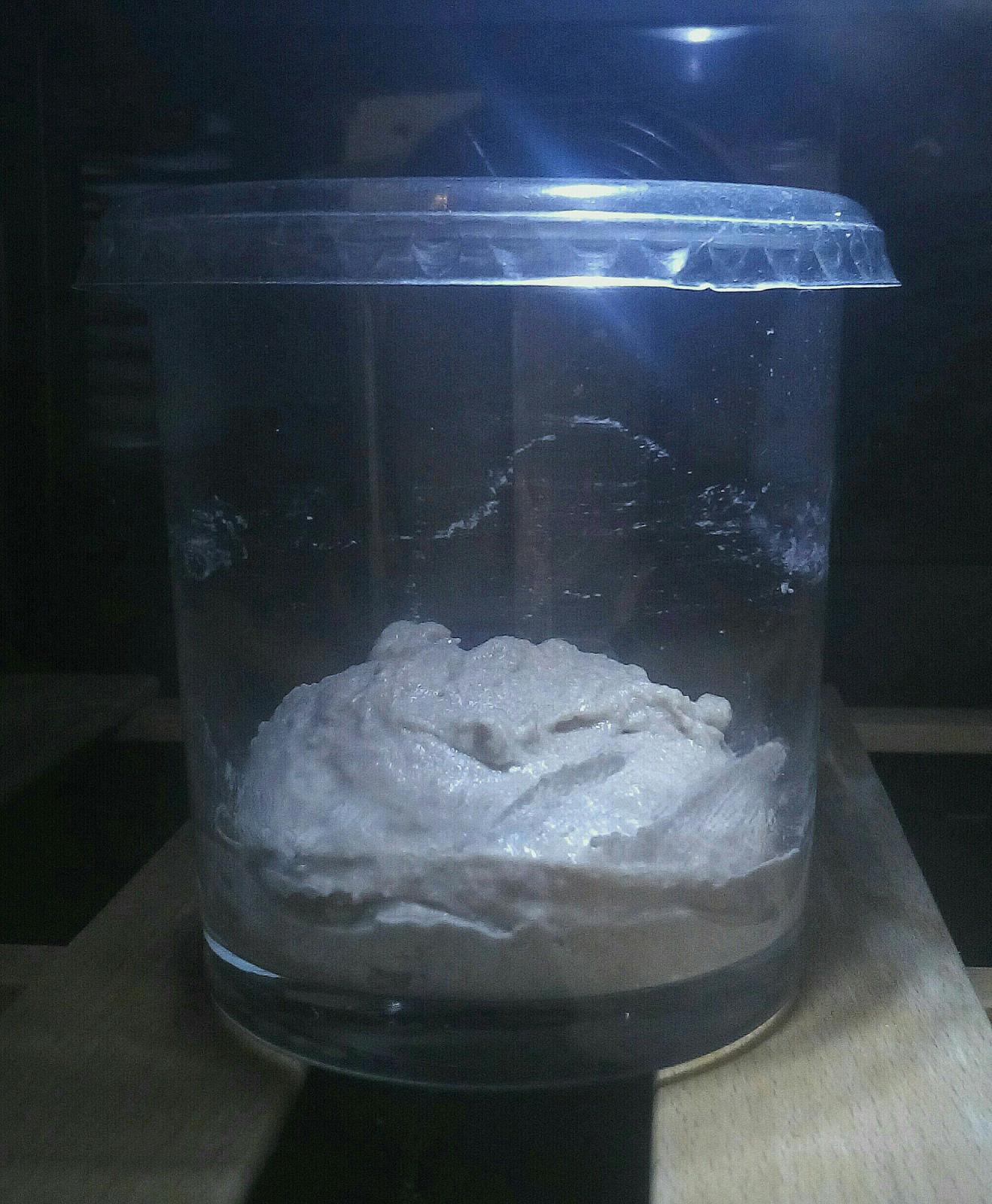 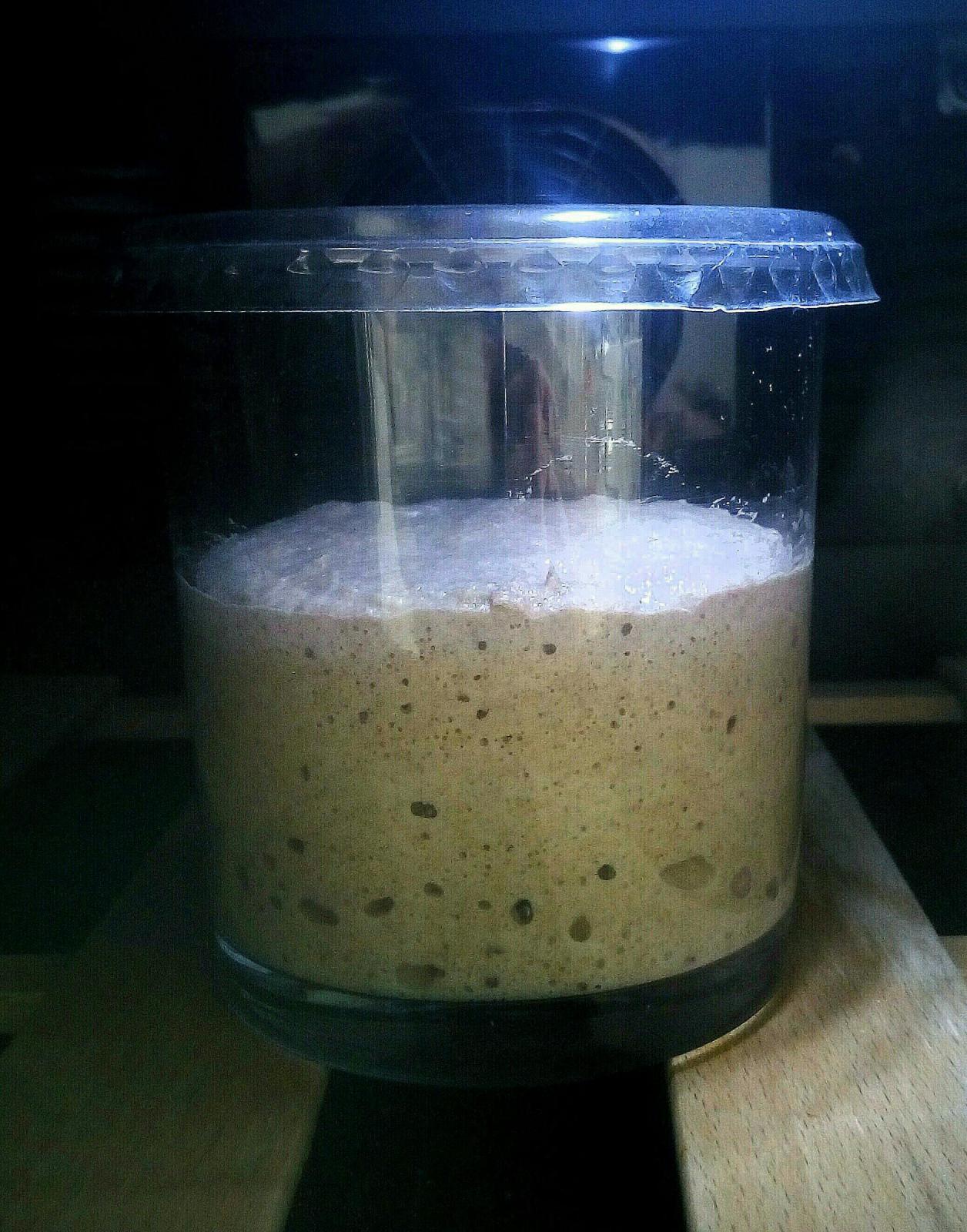 This batter was whisked inside the mixer bowl using a whisk attachment for 4-5min.

After whisking the remaining of the flour and bran were added and mixed with dough attachment just enough to combine all ingredients together (no kneading). Bulk followed for two and a half hours at 28-30C with coil folds in between. Then the dough was shaped, placed in banneton and retarded overnight at 4C. Baked next morning as usual.

This is what came out of all this: 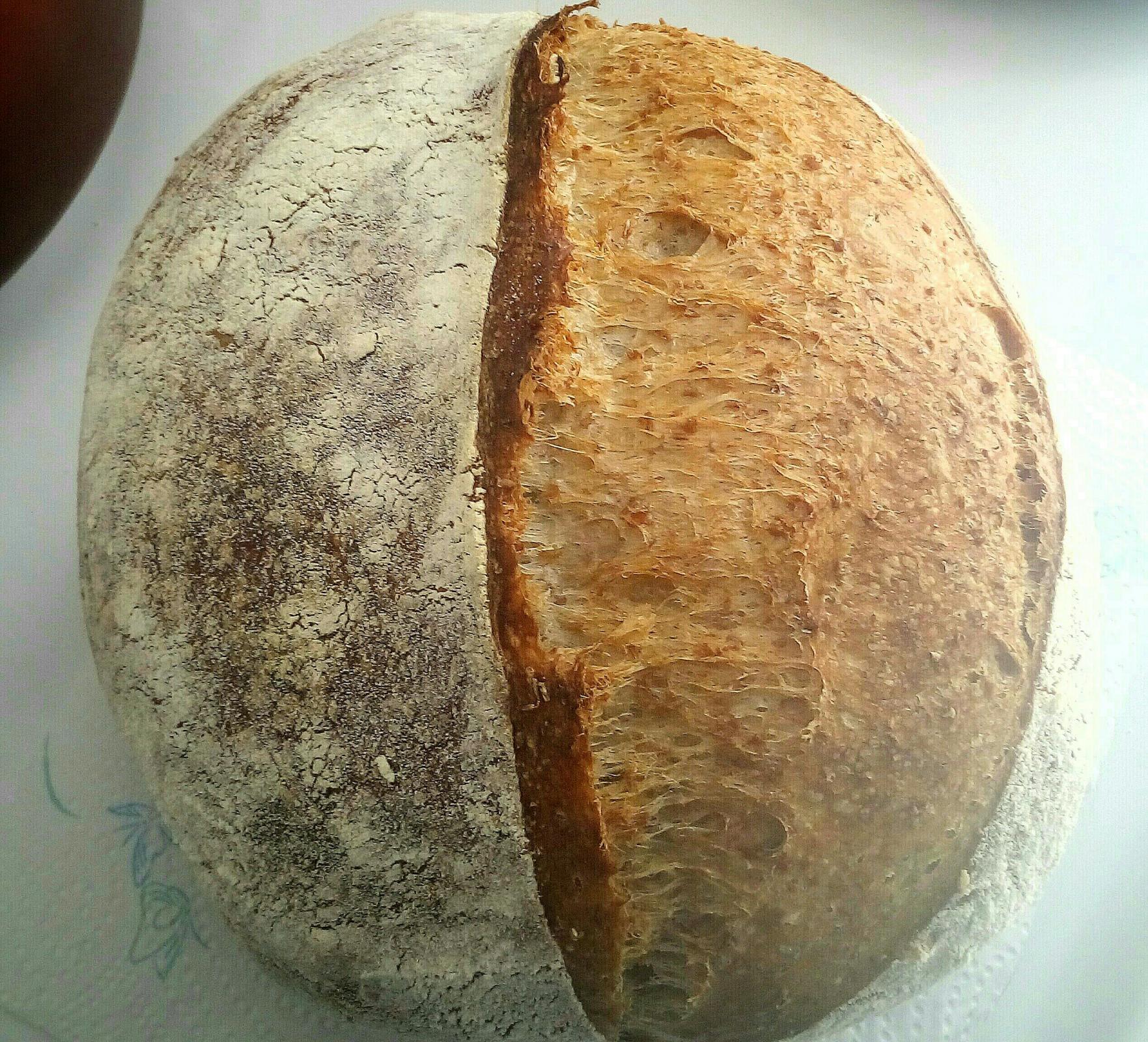 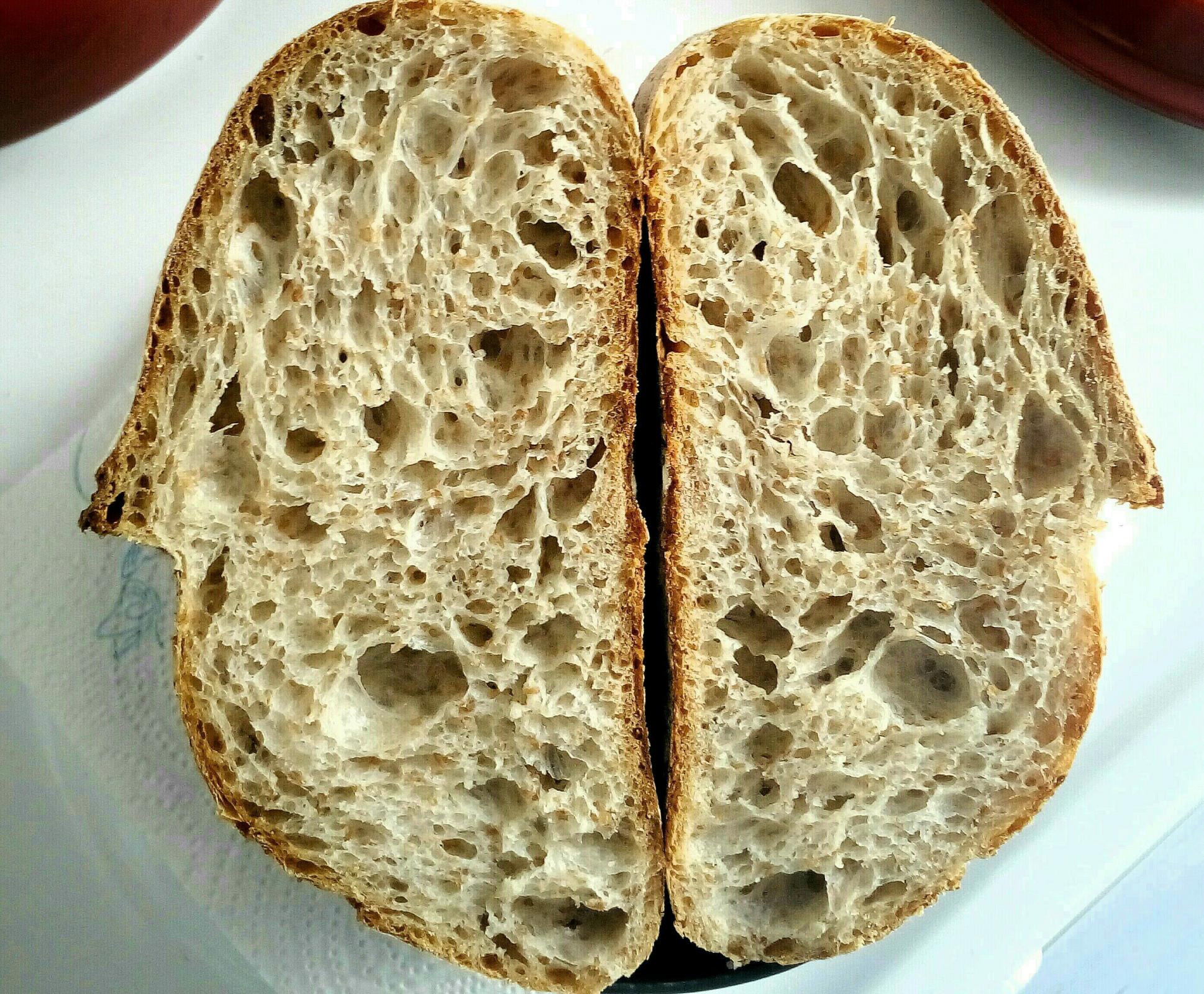 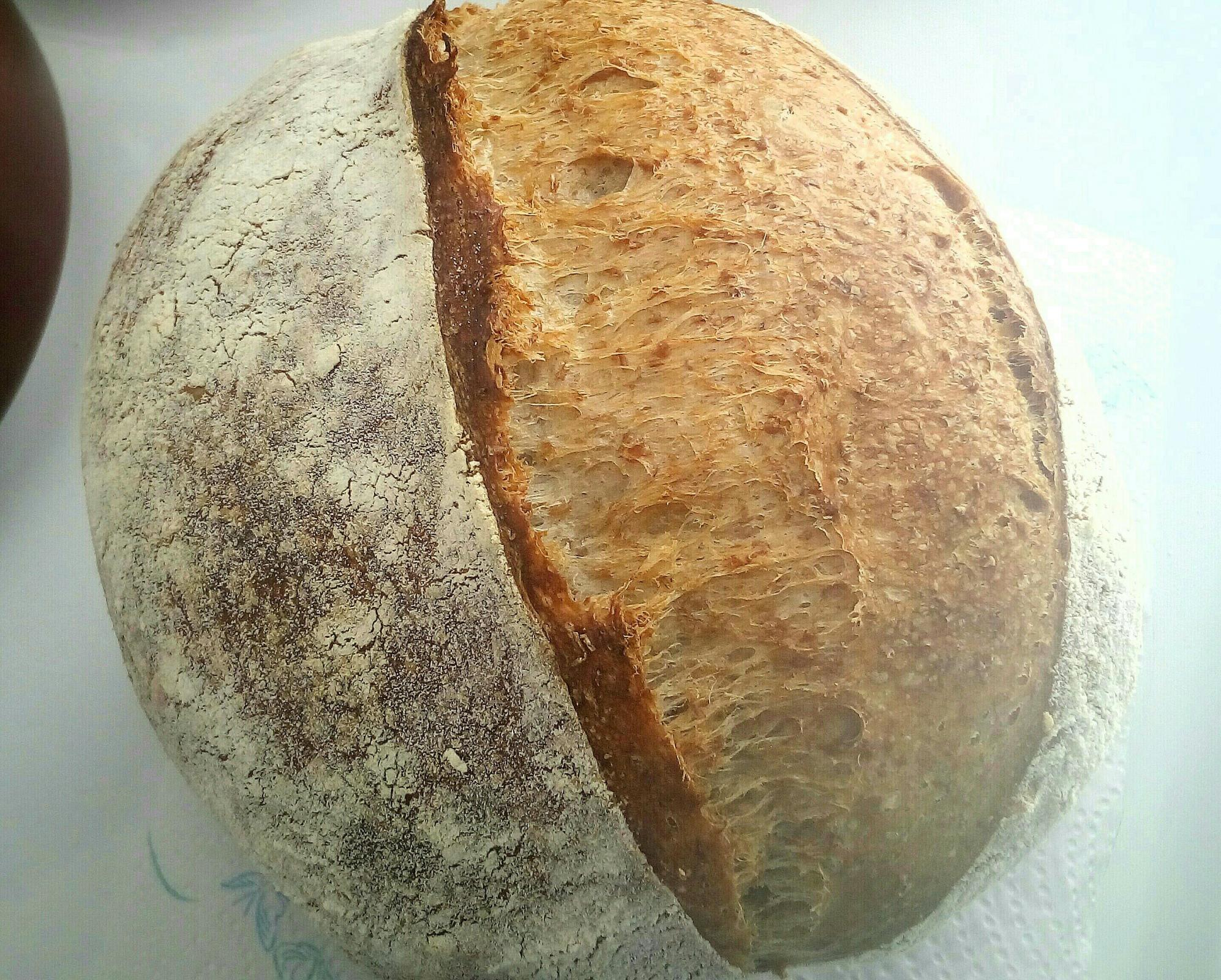 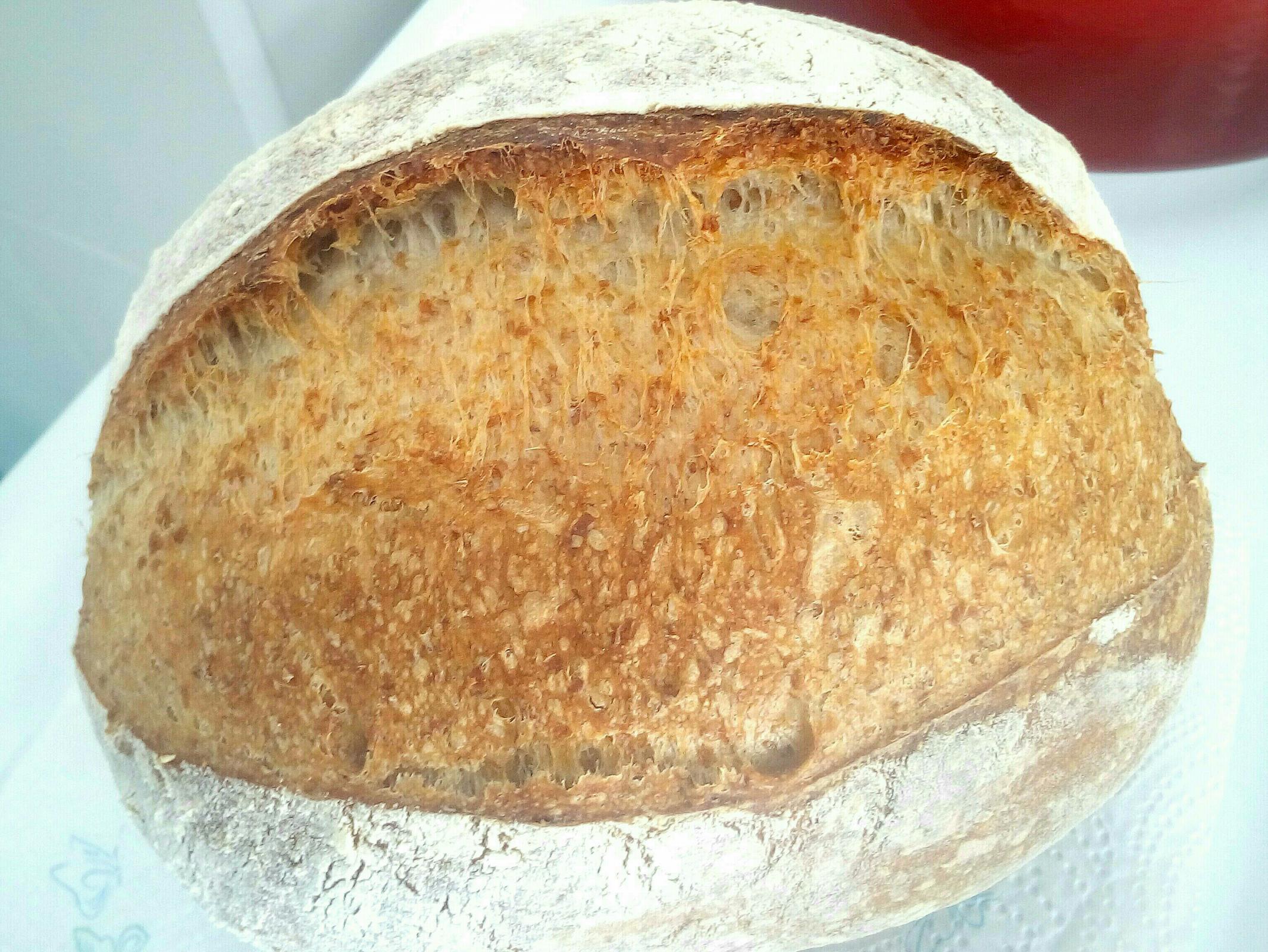 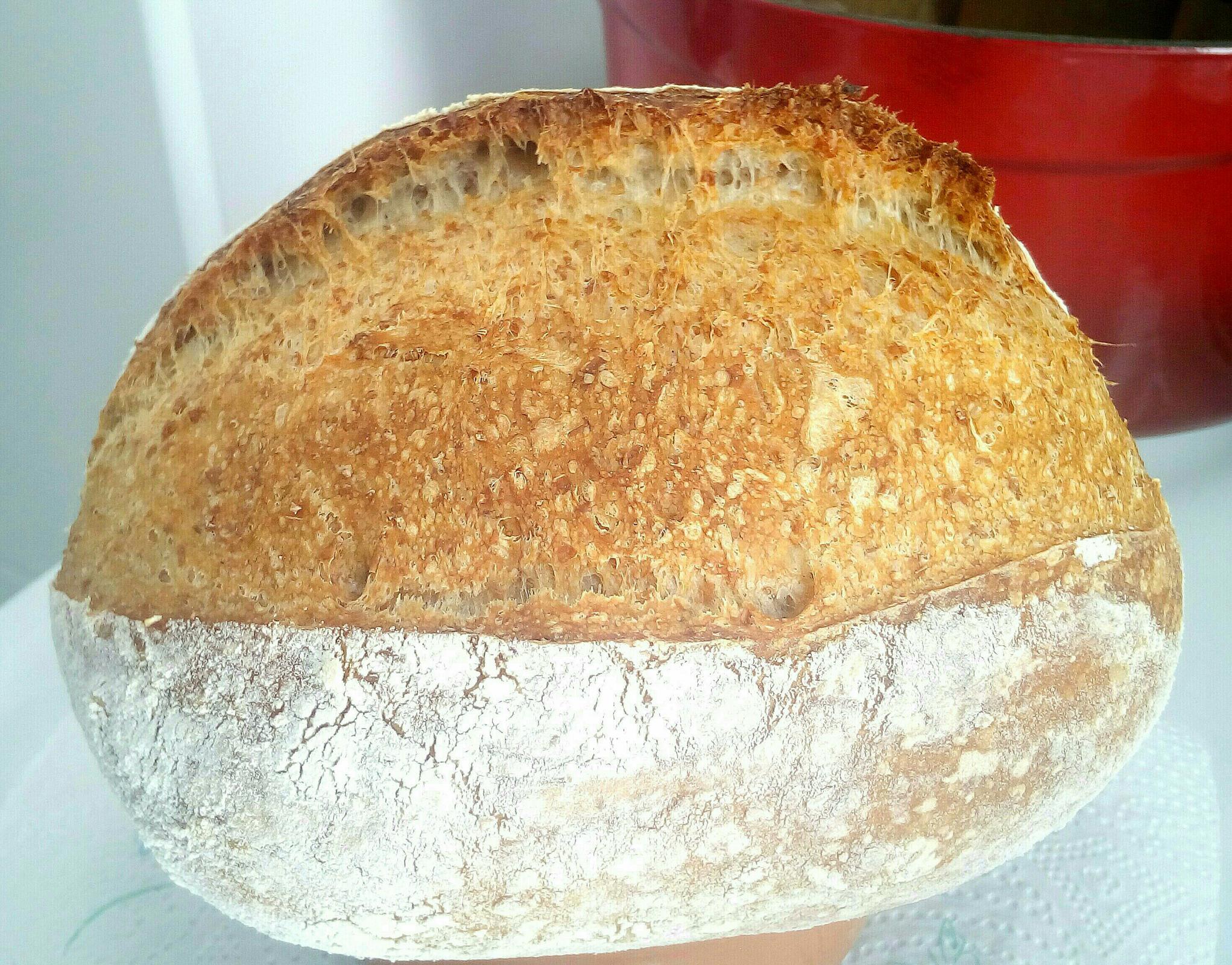 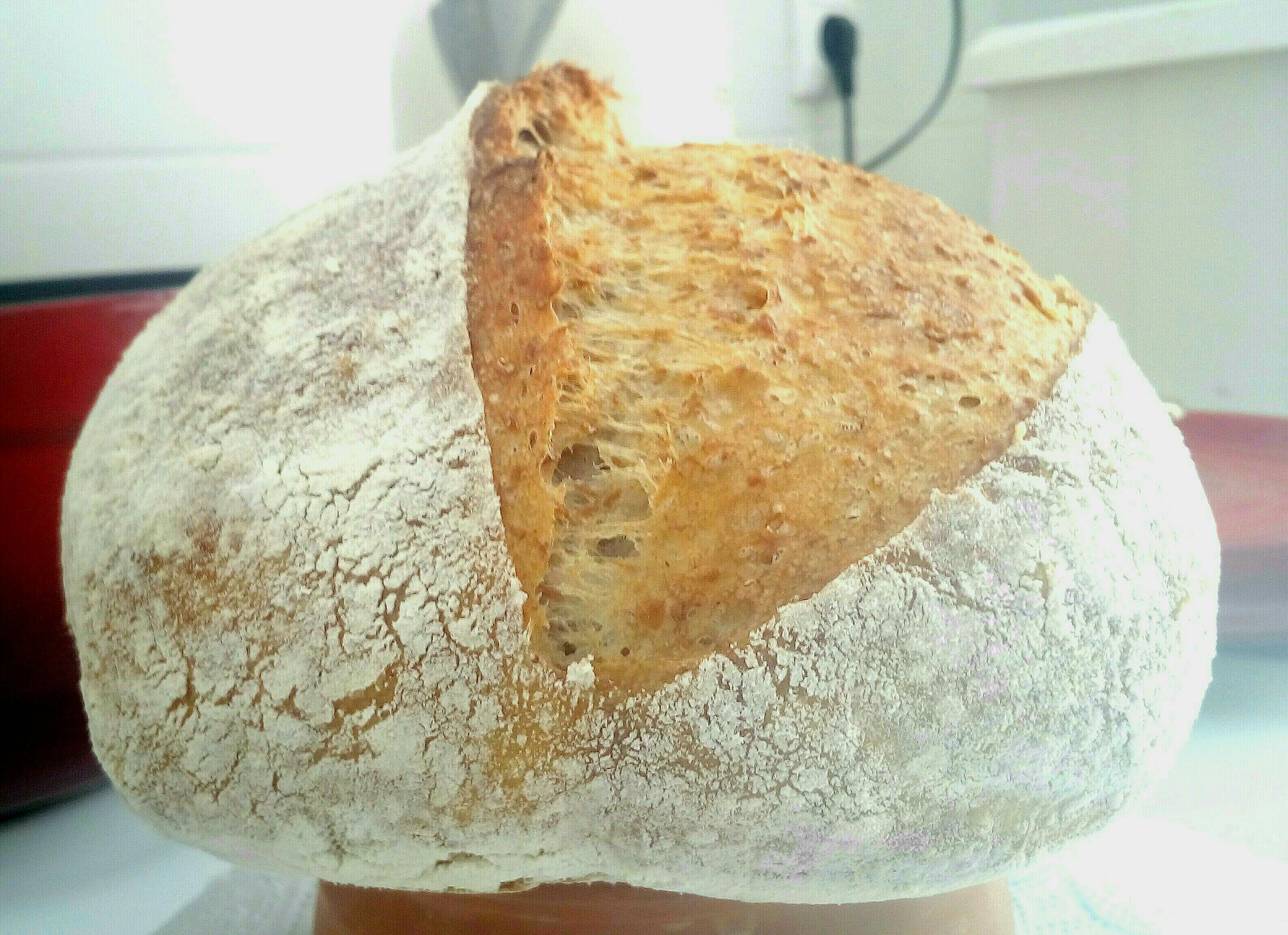 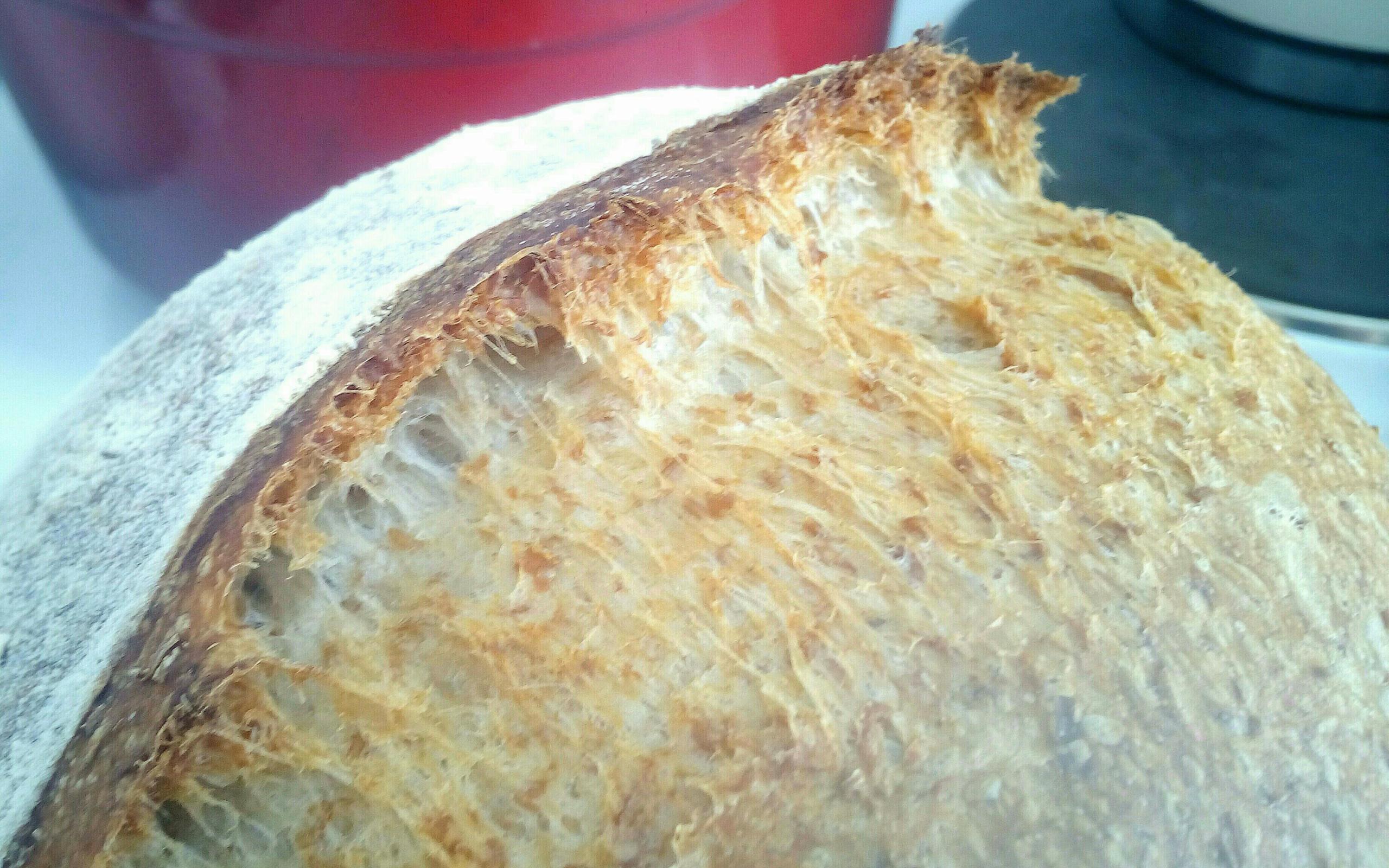 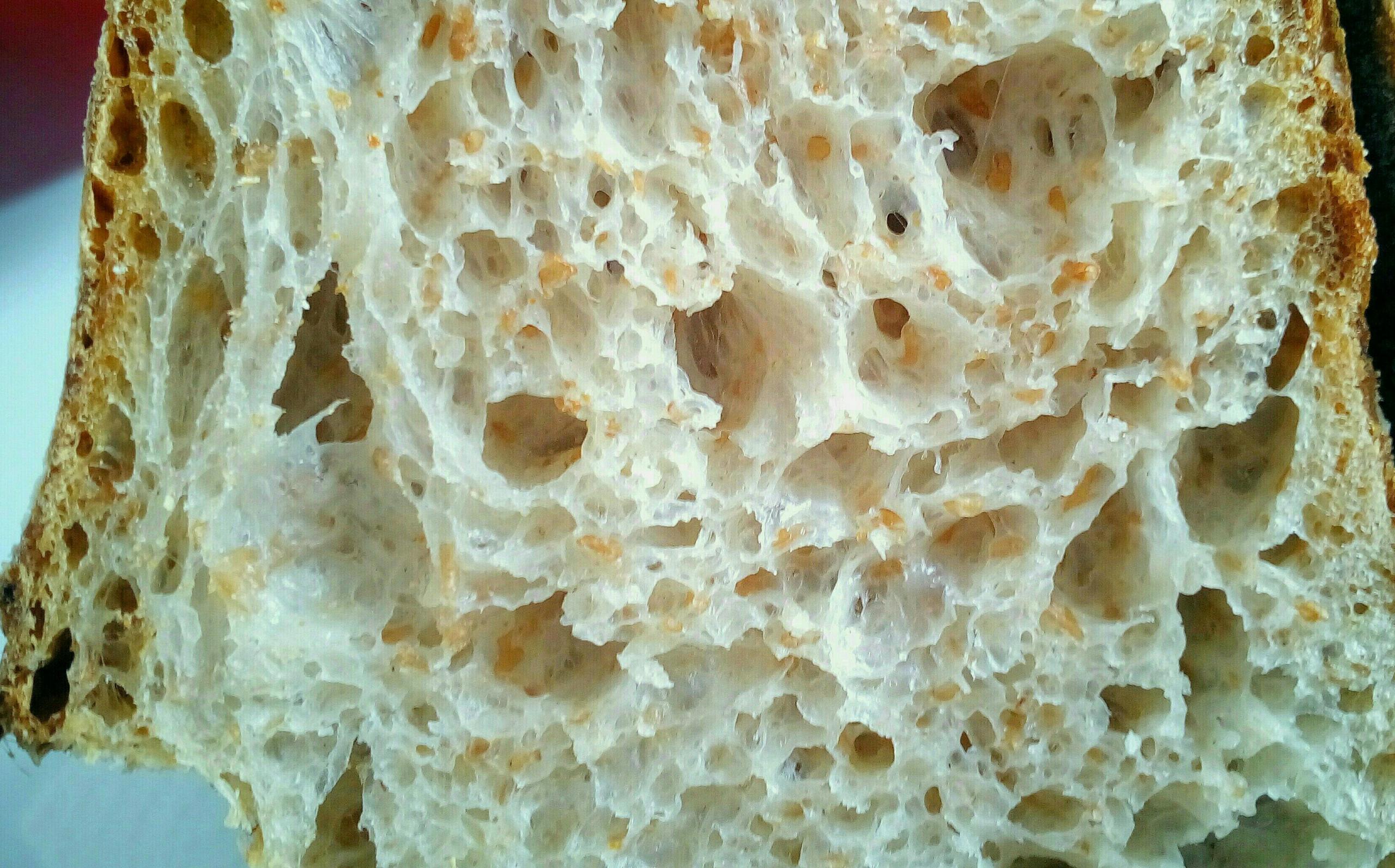 You are very adept at getting an open crumb with all of your methods. In spite of the forced perspective from a smaller than normal sized loaf they are still very impressive. The bran flakes in the white flour is a nice look. The powdered donut look not so much.
SteveB used to post a lot here at TFL and I learned a lot from his site back when he was actively updating it. Thanks for reminding me of his work.
This is just a suggestion but your posts are better suited to the blog section where they would be compiled better and although I have nothing to do with it would certainly be worth considering for front page material.
Don

Thanks a lot for your flattering comments. Critisism and suggestions are always welcome and constructive. Thx.

sourdough bread sticking to oven stone
Do you have any experience with Walmart's...
is Robin Hood BREAD flour the "Homestyle...
Source for First Clear Flour?
Eric Hanner
END_OF_DOCUMENT_TOKEN_TO_BE_REPLACED