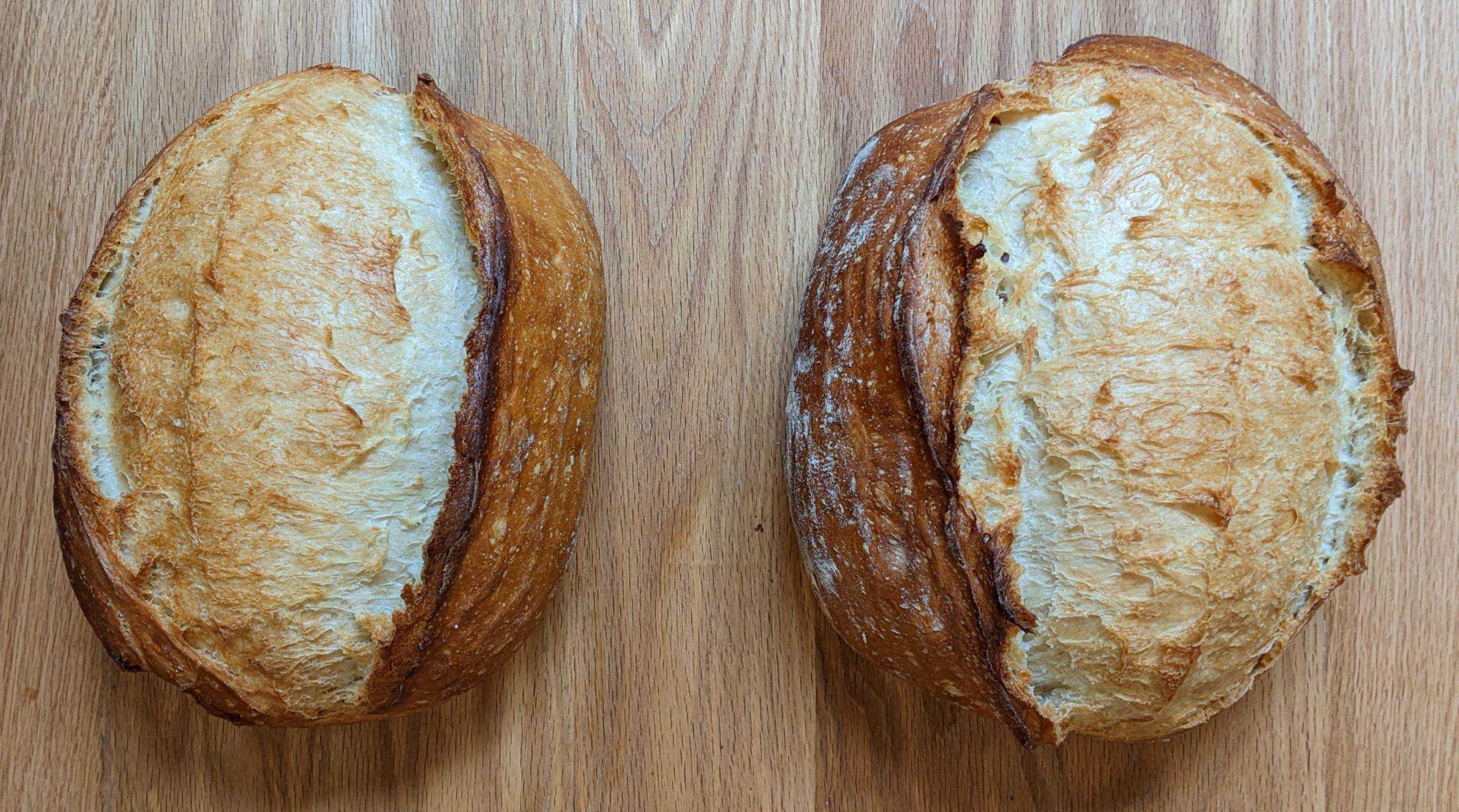 Hi everyone! I've been baking artisan/sourdough bread for a little over 5 years now, but my wife and I just moved into our first house, which the seller was nice enough to put a brand new gas range/oven in. Previously I had done all my baking in electric ovens, so I read several posts on TFL about gas ovens and was a bit intimidated by the difficulties that they can present. Luckily, I was able to apply the tips y'all provided and get pretty good results on my first try, so this post is a big thank you to everyone here! That said, it isn't quite perfect yet, so I would like some feedback to see what I can do differently.

My old setup in the electric oven was this:

When I'm only baking 2 loaves at a time, the crust comes out really crispy, but I've started selling at a farmers market and the reason I got the custom baking steel was to fit 4 loaves in the oven at the same time. When I bake 4 loaves, even though I get good color the crusts are very soft, and bend without any sound rather than cracking. In addition to testing my ability to steam the gas oven, I wanted to a) bring back the crispy crust, and b) see if I could reduce the total bake time to 40 minutes so that it doesn't take as long to bake for the market.

When I did my first bake in the gas oven, this was the setup:

The crust was definitely crispy, but now I'm wondering if I even want it to be crispy because it was thicker and tougher (thus harder to bite in a sandwich) than I've been used to lately. 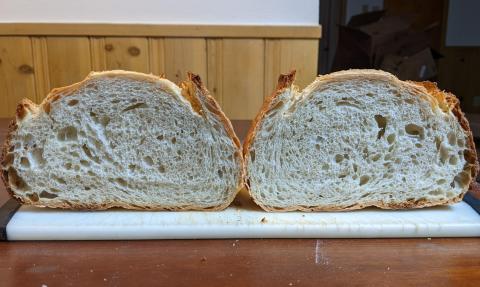 So my main question for y'all is this: is it possible to get a nice crispy crust without making it too chewy or tough? It's been so long since I baked a small batch in an electruc oven that I don't remember if they were always like this or if the drier air in the gas oven is causing this. My next idea is to use convection and/or a higher temperature to finish the bake faster, but I worry that this will dry out the crust even further and make the problem worse.

Any advice or comments would be appreciated. Thanks!

Fred. your crumb looks excellent and your technique is very good. I baked similarly in a gas oven for many years with good results like this.

In my experience, sourdoughs always have tougher crusts than plain yeasted breads and additionally toughened by long fermentation times.  I haven't tested this lately, but steam time will also affect crust thickness.  I don't think the overall baking time has too much of an effect on the crust thickness of high hydration doughs.

You could try a formula with a sourdough poolish or biga for flavor, with a short(er) fermentation time and spiked with yeast in the final dough to compensate for the shorter fermentation and reduced sourdough percentage.

I've always assumed a gas oven that vents its combustion gases through the oven (instead of around it) is going to be moister than an electric oven.  That said, I now bake in an electric oven and my times are not that much different.

Each oven is a little different, even two models of the same oven.  You'll have to do a few trials to optimize your conditions.

In a properly pre-heated oven, baking stone at 440-460°F (measured with an Infra-Red thermometer; any one of the $15-25 models are fine--they don't have to be high precision devices), I bake 70-75% hydration doughs for 15 minutes under steam (vent blocked), then 20-28 mins at 450°F, vented.  The oven should be fully warmed up before baking; as you probably know, the walls and especially the stone will lag the air temp of the oven.  When I remove the towel from the vent, I also open the oven for a long pause to vent the steam well (be careful...) & then rotate the loaves 180°.  Obviously, residual steam impedes browning.

°F lower than the bottom.  I think you could probably raise your oven temp to 460-465°F and save a little time.

My crust comes out really crispy when I bake two loaves at a time, but I recently started selling at a farmers market and the custom baking steel allows me to bake four loaves simultaneously.

Sounds great :) I am a newbie here and got a lot of new ideas after reading different comments, Excited to be here.